The B Team gets their moment in the spotlight as RuPaul’s Drag Race takes its sweet time introducing all of the season 14 girls. As we noted last week, we don’t mind this particular formula, because it tends to give every queen – even the Porkchop’d ones – a little more time in the spotlight, which tends to make withered old recappers like us very happy. It’s just easier and more entertaining every time the show gives the dolls a little space to breathe and just, y’know, be drag queens. Non-rhetorical question: Do you think there’s a disadvantage to being in the second group. Everything feels a little more exciting in the premiere episode, but by the time they get past the introductions in the second episode, we’re just checking the rest of it off a list until we get to the elimination. Anyway, here: Now, let’s meet the night shift, shall we? Jorgeous instantly came in and delivered the “I’m the spicy Latina speech” that is now standard for every premiere episode of American Drag Race. No tea no shade against her, because she is exactly what it says on the tin and she seems to be very good at it, but Drag Race sure does like to cast a lot of the same types over and over again. The photo challenge was kind of dumb and didn’t really yield very interesting results from any of the girls. Considering the day shift had to serve face while mounted on a spinning wheel, this doesn’t seem like a very fair setup. Granted, it’s not like the results have much bearing on the final elimination, but there’s still a cash prize handed out and this week’s winner (Angeria) sure didn’t have to work as hard for it as last week’s (Kerri Colby) did to get hers. Anyway, Jorgeous is, as noted, exactly what she says she is: a hot Latina spitfire who can serve hot looks and dance the house down. Deja Skye is your big, bold, campy girl for the season and her entrance look delivered that message clearly and succinctly. Unfortunately, she’s also the girl who had to learn that lesson one girl always has to learn in the first episode: This shit is harder than I thought it would be. Her comedy routine lacked comedy, which is kind of a dealbreaker in a talent contest. Jasmine Kennedie is your statuesque beauty who clearly understands her drag history. Some queens (like season 11’s Scarlet Envy, for instance) have a knack for doing old-school glamour drag without looking old school themselves. We think her youth is a big factor here, but she’s also really well suited to it. She knocked them dead with a great dance performance, which means she’s likely to be way more than a looks queen with good references. Angeria Paris Van Michaels may as well have giant neon sign that says “Southern Pageant Queen” follow her around at all times, so clear is her background and style. Ru was always going to love a Black queen from Atlanta, but Angeria really earned the hell out of both her wins. Michelle Visage once made the observation that the reason pageant queens do so well on Drag Race is because they come to the competition fully loaded; not just the gowns and the wigs, but the ability to deliver a to-the-back-row performance on command. Lady Camden feels like she wandered in from the wrong franchise, but she’s far from the first immigrant queen on the American show. It’s just that after three seasons of Drag Race UK, we’ve come to expect that accent to be greeted by a roomful of similar or adjacent accents. Even her style of drag, from the Spice Girls influence to the fun “ballet” performance, felt very “UK” in comparison to the other girls. None of this is a complaint. She’s fun and cute and she gives witty sound bites. Daya Betty has a pretty funny name and she’s cute out of drag, but we didn’t love this look at all. First, when you come walking into the Werk Room in your business pumps, sporting a mullet, a Dynasty gown, and fishnets, talking about how your influences are “’80s grunge,” we’re gonna stop you right there and label you a bit of a mess. Which is mean, we know, but her drag not only came off basic, it came off confused. Maybe she’d have blossomed given more time (and maybe she’s not completely out of the running), but her looks, references, and talent were all underwhelming and a bit of a mish-mash. Also, if you’re going to do a lip sync and call it your talent on this show, it better be one hell of a performance. This was basic. Maddy Morphosis, Heterosexual. We made most of our feelings known about Drag Race’s first cishet male contestant in the Meet the Queens post, but here’s the upshot. We are well aware of the long history of cishet male drag as an art form, from Milton Berle to Dame Edna to Madea, and there’s nothing inherently wrong with giving someone from this corner of the drag world a shot at stardom. On the other hand, we wrote a book that had two basic theses to it that we argued again and again with a hundred different examples from history. The first is that Drag Race made history by being the queerest show in the history of television, doing more to highlight, articulate, and define queer lives in the 21st Century than any other show before it. The second is that queer drag, like all other queer forms of art, arose specifically out of the oppression faced by queer people. Queer drag was created by trans women as a form of truthful self-expression and adopted by queer men as an art form that specifically defied the gender norms that were killing them. Drag Race has always been clear about these connections (hence our book) and used to actually spend much of its earlier seasons schooling the audience on things ranging from the definition of reading to the ways queer people create their own families in the face of rejection. When this episode devoted roughly five minutes to a straight man talking about his fears of acceptance in this space, we bit our tongues so hard, we may be talking funny for the next few days. Look, as we said in the Meet the Queens post, we’re not happy about his inclusion but we’re also not gonna stand on a balcony and rail against it. He’s here, he’s not queer, get used to it. We just wish Drag Race had given a little more time and space to bio queens or drag kings before letting Mr. Morphosis in. If he was untalented, it’d be a lot easier to stay mad, but his drag is good-not-great and he at least managed to impress during the talent contest. We hate to be essentialist about it, but these sorts of observations are bound to be made when you’re a straight guy in a queer space: His style is seriously lacking. The Guy Fieri look could have been cute, but that butch wig and those white tights are not great. The office manager outfit for the talent show was horrible. Another observation that we hope to not have to make often, but is also to be sort of expected given the space: There was much talk from him about “my sexuality” and about “identifying” as straight, which are two phrases straight guys pretty much never use to define themselves. We’re not here to make the obvious jokes and inferences, though. We kinda thought it was a case of him being in a queer space and using the language that’s normally used in that space to talk about himself. Anyway, we hope we can just get on with rating him on his performance from here on out, but we suspect Ru is going to continue to make an issue of his straightness. The night shift served up a way more diverse lineup of drag than the day shift did last week, which gives us some hope that there will be interesting looks walking that runway this season instead of a lot of samey-same. Jorgeous’ look was, well, gorgeous. We suspect this sort of pageanty high glam is her sweet spot. We wonder if she’ll be pushed to do edgier forms of drag. Deja’s look is kind of interesting. It’s big and bold in a draggy sort of way and we like the head piece. But the lace is dreary and poorly blocked out. It’s a little unflattering. As Michelle noted, Jasmine is delivering pure old-school ’60s drag and doing it well. She’s another one who may need a little tough love in order to get her to switch things up a little. It’s a bit of a Halloween costume, but Maddy acquitted herself well with this look. The style once again feels a little mumsy and not draggy enough. There are so many more fabulous and sparkly ways to evoke Marie Antoinette than this pseudo-Betsy Ross dress. Still, she delivered a look worth looking at. Angeria’s look is pure flawlessness. This bitch came out of the gate HARD. Lady Camden’s look is cute, funny and campy. That seems to be her sweet spot. Daya Betty seemed so impressed with her ribbon dress but we thought it was kind of hideous. The colors were harsh and that PLAID looks cheap and very not draggy enough. Also: the wig doesn’t really go with it. 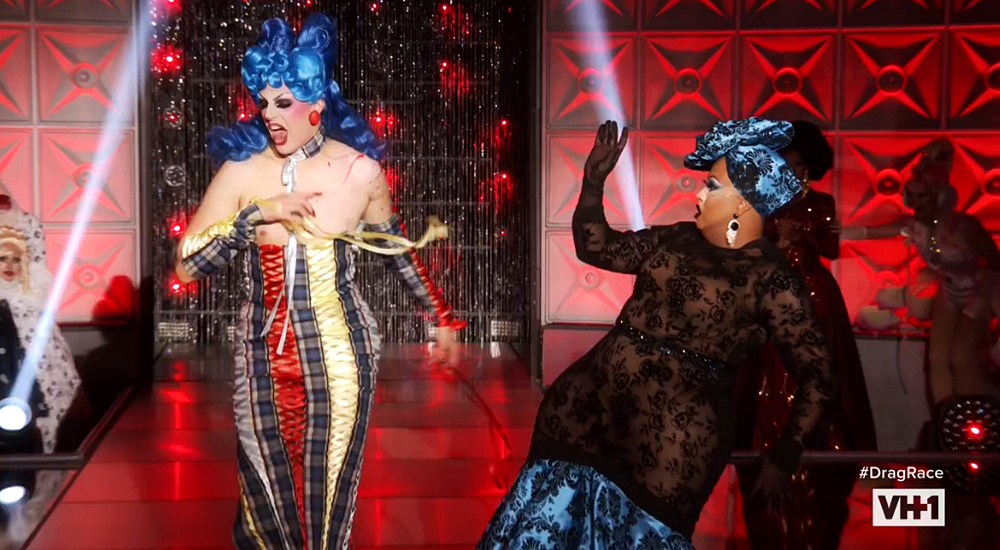 This is who we would have put in the bottom, so no complaints there. Daya once again proved herself not ready for this competition as Deja pretty much swallowed her whole. We suspect we haven’t seen the last of the two eliminated queens. If this is the end for her, we can’t say she didn’t earn it, unfortunately. She came in with a lot of charm and energy, but her drag was mediocre.