Cathy and Bill are dialing way back on the glamour from yesterday and keeping things low-key and local. In other words, they’re engaging in that longtime diplomatic tradition of dressing in folk costumes and trying not to look colonial about it. Good luck on that one, kids. 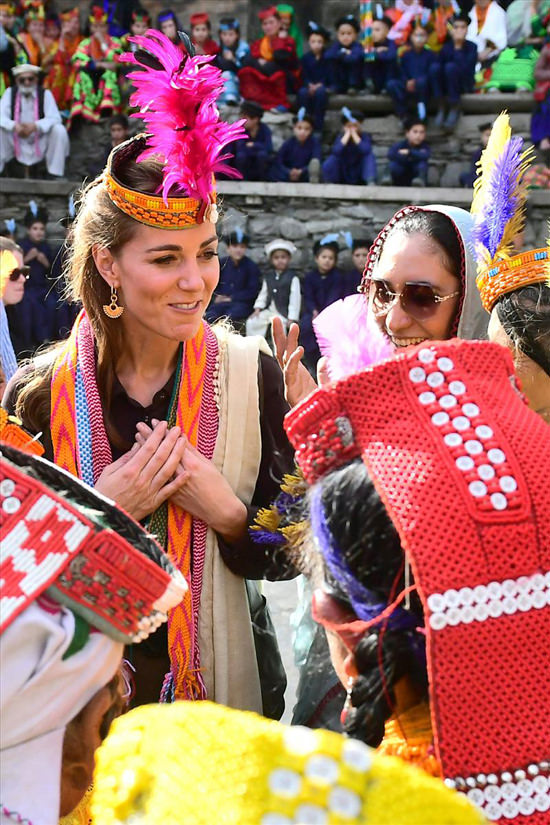 Interesting to note that Cathy’s continuing to wear the dupatta-style scarf from her shoulder throughout this tour. Even her Jenny Packham gown from last night sported one. Also slightly surprising to see the Cambridges so far apart on the color wheel. Granted, they both appear to have outfits chosen to coordinate perfectly with their surroundings – soil, sand and sky. Even when they’re casually dressed, you can tell the fashion component of this tour has been meticulously coordinated and thought-out.

There’s always going to be some question as to whether it’s really appropriate for visiting dignitaries to dress in folk costumes during their visit, but there’s no denying it’s a very long tradition in western diplomacy and we don’t think we’ve ever heard of local press making an issue of it. Pakistani press and social media seem to be extremely appreciative of their efforts, so in the end, it’s never going to be for us to really say whether it’s right or wrong.

The Duke and Duchess of Cambridge visited a settlement of the Kalash people in Northern Pakistan, to learn more about their unique heritage and traditions. #RoyalVisitPakistan pic.twitter.com/I1D7qF0WAp

In Bumburet The Duke and Duchess of Cambridge saw several inspiring community-led initiatives that aim to equip local society with the tools they need to adjust to the changing landscape and weather patterns of the area. #RoyalVisitPakistan pic.twitter.com/WKeshq1fKq

The Duke and Duchess of Cambridge visited the stunning mountains of Northern Pakistan, where the stark effects of climate change and global warming are having a profound impact on the communities that call the region home. #RoyalVisitPakistan pic.twitter.com/NLv8XEPtQ9