The Best Celebrity Style Looks of 2020, Part 3: WERQing From Home In the first installment of our 2020 celebrity style retrospective, we saluted the best looks from The Before Times; that brief period in 2020 when things were completely normal and red carpets occurred in the manner in which we all remember. For the second installment, we singled out the best Lockdown Lewks, as celebrities did the same thing we all did when the world got suddenly a lot scarier: ditched fussy clothes and curated ensembles for comfy stay-at-home looks. But this third installment is where the real story of 2020 celebrity style resides, because this turn of events may be the one aspect of high-fashion celebrityhood that remains permanent in a post-COVID world: the WERQ From Home ensemble. This differs from a typical Lockdown Lewk because it arose specifically as a response to the lack of photo calls, red carpets and talk show appearances that accompany the release of any star’s latest project. All of these looks are specifically promotional in nature and sport the full-on styling treatment, from the perfectly curated ensembles to the television-ready hair and makeup.

To be accurate, celebrities have been serving lewks on the ‘gram for as long as there’s been an Instagram to do so. Most of the top stylists have a heavy social media presence and a history of featuring behind-the-scenes shots of celebrities getting primped and processed for some form of public appearance. And some of the more fashion-minded stars have been known to simply get dressed up at home in order to send out a few shots to their followers and remind everyone that they still exist. But it’s hard not to see the appeal of the Instagram Serve as a permanent promotional tool after it became a temporary response to the events of the year. Any well-styled look on a celebrity will garner loads of media coverage without much effort, regardless of where she wears it or who took the pictures. Everyone from Vogue to InStyle to l’il ol’ us are just as likely to give these pictures coverage as they would any public appearance wearing the same outfit. Best of all, the star has complete control over what pictures get released and the stylist has complete control over the environment in which they’re worn. There’s no need to worry about limousine rides or sudden changes in the weather, for instance. And of course the fashion and accessory brands essentially get look book-worthy shots of their wares beamed out to millions just for lending them out.

In case you can’t tell, we LOVE this development. Weep not for the red carpet, though. Social media modeling is just another tool in the arsenal but it’s not likely to replace photo calls and red carpets completely. Part of the reason we find these serves so fun is that almost immediately, a certain set of considerations if not rules started forming around them. If there’s one way we can sum it up, it’s this: the social media photo call look has quickly evolved so that the more adept and fashion-minded practitioners (who, not coincidentally, all work with the top stylists) understood that the arena, which is almost totally lacking in practical considerations because it’s so carefully controlled, practically begs for looks with more punch to them – brighter colors, bolder patterns, and sometimes even fussier pieces all work so much better if you’re just standing and posing for a few highly controlled shots in a more or less neutral background. The end result of this development has been a sudden rise in risk-taking or a sharp increase in the level of polish and perfection. In other words, everyone went a little Vogue-cover in their efforts. Okay, that’s not entirely accurate. Not everyone – but the following folks sure did. Lily Collins may be the ultimate Instagram Serve princess of the year. We actually had to work to keep her appearances on this list down to two because very few ladystars were so routinely putting out these sorts of high-end editorial-type photo sets in perfectly replicated runway looks. This dress is gorgeous, but the bubble hem might have annoyed us if it had been worn on a red carpet. Hands down our favorite women’s suit look of the year. It’s got some edge, it’s got some attitude, and it inexplicably feels a little fun when it’s all put together. Amanda and her team took to this format like nearly no one else. She served a lot of great looks by making quietly dramatic choices and turning up the dials on the hair and makeup glamour. This dress gets more interesting the longer you look at it. Just a fun, cute, Disney-esque sort of look; like an updated Mary Poppins almost. It wound up on this list by process of elimination – meaning, to our surprise, we couldn’t bring ourselves to eliminate it. We dumped a whole bunch of showier and more high-end looks than this one, simply because it’s got such a basic, undeniable appeal to it. And it suits her perfectly. Even Prince would have been all “Damn, girl.” This is the perfect example of everything we tried to say in the opening paragraphs. It’s not that we don’t think this would have worked exactly as styled on a red carpet, but the setting and format of these home shoots are really pushing the stars to be bolder and more outrageous. Ship it all to us, Prada. We’ll send you our sizes. 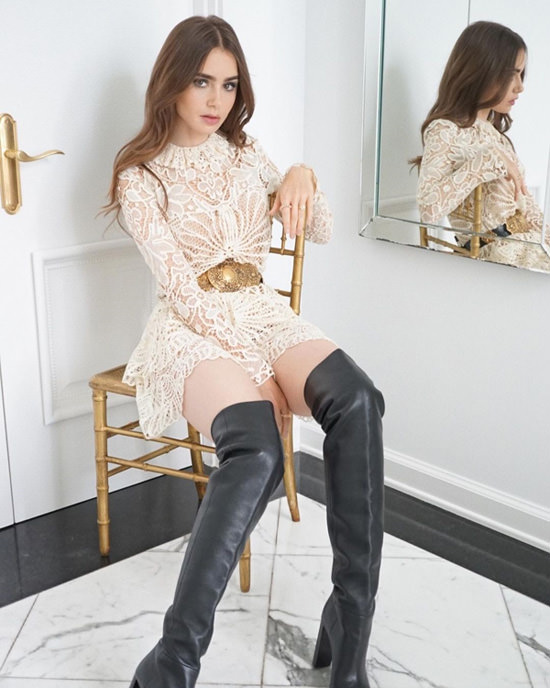 Leather-and-lace looks can be so cliched, especially when you’re working with white lace and black leather thigh-highs. But she’s good with fashion and the design of that dress is just interesting enough to keep this all from going a little too sex-doll in tone. It’s simply a gorgeous look on her; sexy and high-fashion at the same time.

Jennifer Lopez promotes herself in Dior What’s J Lo doing? Where is she going in that elevator? Is it a place that does not have a coffee machine? Who knows? Who cares? The point is that she looks amazing in the kind of high-end ripped-from-the-runway Dior ensemble one should probably not wear while on an elevator with a cup of coffee in your hand. But let’s face it: the mug’s probably empty. This is probably in our top three for the entire year. It’s so bold, so photogenic, so slightly off, so full of details to take in. Exactly the kind of look best suited for this type of picture. If she wore this on Fallon or Kimmel, the details might have been too distracting on camera. Love the whole Barbie feel of the look and how it takes full advantage of the situation by serving you coat-on and coat-off versions, perfectly posed and composed. Like some sort of fabulous catalogue for famous people. Of course it’s the hair, hoops and nose ring that elevate this and take it somewhere far more interesting than mere fashion doll cosplay.