Home » Movies » One Iconic Look: Anne Hathaway in Chanel in...

One Iconic Look: Anne Hathaway in Chanel in “The Devil Wears Prada” (2005) And now for something a little more contemporary and slightly less formal. After diving deep on Keira Knightley’s Atonement gown and Marilyn’s “Diamond’s Are a Girl’s Best Friend” gown,  we wanted to turn to something with a more 21st Century feel to it while still being in the realm of “iconic.” We suppose the best way to describe an iconic film costume is this: If someone wore a version of it to a Halloween party, most people would know who she was supposed to be. And for a certain age group (roughly younger Gen-X to older Millenials), Anne Hathaway’s Chanel jacket and boots in 2006’s The Devil Wears Prada, has stood the test of time and become a highly referenced snapshot of early aughts fashion.

It’s also just a straight-up killer look. Probably one of the most stylish things Anne Hathaway’s ever worn on film – and she’s played her fair share of stylish characters. It’s also, second-for-second, one of the highest-impact cinematic looks of the last couple of decades, given that, for all its fame and its many references in pop culture, it was onscreen for little more than a minute’s time in a film stocked to the rafters with highly stylish looks on almost all the characters. The film’s costume designer was Patricia Field, who made her name as the costume designer for Sex and the City (after years as a highly sought East Village clothing boutique owner and stylist), which means she not only knew a thing or two about statement-making fashion in the New York fashionista mode of the early 2000s, she also had a highly trained eye for curating iconically cinematic looks by picking and choosing from the latest runway collections. Costume design isn’t always about literally designing pieces of clothing; sometimes it’s about designing looks through styling in order to situate a character in a certain world or to show her in a certain light. The film itself has a slightly off-kilter and contradictory take on the world of fashion. The character of Hathaway’s Andy Sachs is depicted as someone ill-suited to the world of high fashion and for this, she’s subjected to a string of insults about her appearance, making all the employees of Runway magazine come off cruel and shallow. Andy, her chef boyfriend, their circle of friends and even Andy’s father all spend the film either mocking her for her job or berating her for caring about her job. At work, people like Nigel (Stanley Tucci) rail at her for not understanding what a “beacon of light” the magazine is and how it has showcased the work of the greatest artists of the century at the same time as Miranda (Meryl, of course) refers to Andy as “the smart, fat girl.”

To be fair, in our time mingling in the world of fashion, we don’t know one publicist, designer, stylist and especially editor who didn’t think the film portrayed that world with some accuracy, with a lot of people telling us over the years that Miranda’s nearly legendary “Cerulean” speech was one of the best summaries of the industry any of them had ever heard. But it’s not so much that push-pull of cruel shallowness and high-influence artistry in the portrayal that feels off. That’s all fairly on-point for any true look at the halls of high fashion power. It’s more the idea that Andy has to ultimately reject this world precisely because of that cruelty and shallowness in order to become essentially a better, more rounded person. After running a gauntlet of moral and ethical quandaries throughout the film, after constantly being berated by the people she loves for her involvement in this world, she literally runs away from it all, metaphorically in order to save her soul. Which is why it’s so interesting that the film presents this moment as one of high empowerment for Andy. Not only does she shut the office bitches up (who, not for nothing, are each wearing the dowdiest looks either of them sport for the entirety of the film except for the time one of them wound up with a deadly illness in the hospital), but she’s able to project a new confidence and smoothness in her job. This short scene is followed by a montage set to “Vogue” in which Andy gets better and better at her job in a succession of high-fashion ensembles – not one of which is as memorable as this one. That isn’t a coincidence. Pat Field is way too knowledgeable about what she’s doing not to be making a point with this specific choice of outfit to represent Andy’s turn. The makeover montage is an extremely popular and long-term cinematic trope that almost never fails to satisfy the audience, especially if there’s a “shut those bitches up” payoff.

Almost all of Andy’s high-fashion ensembles in the film are aughts-trendy looks in a generically “New York Fashionista” mode, but this look is the only one that’s working a specific theme. After being subjected to a barrage of “Not Our Kind” insults, it’s a hell of a flex to stroll into the office wearing the ultimate signifier of New York City insider status, the posh private school blazer. It’s also a smart and savvy move to give the audience just enough of a reference to prep school girl realness (note the mere hint of a tweed skirt) and then distracting them from the obviousness of the reference by putting her in a focus-pulling (to the point that they’re part of the scene’s dialogue) pair of thigh-high boots. Note that this outfit is full branded items, in true high-fashion mode. What’s the point of Chanel if you can’t tell people you’re wearing it? Check the heels, girls: 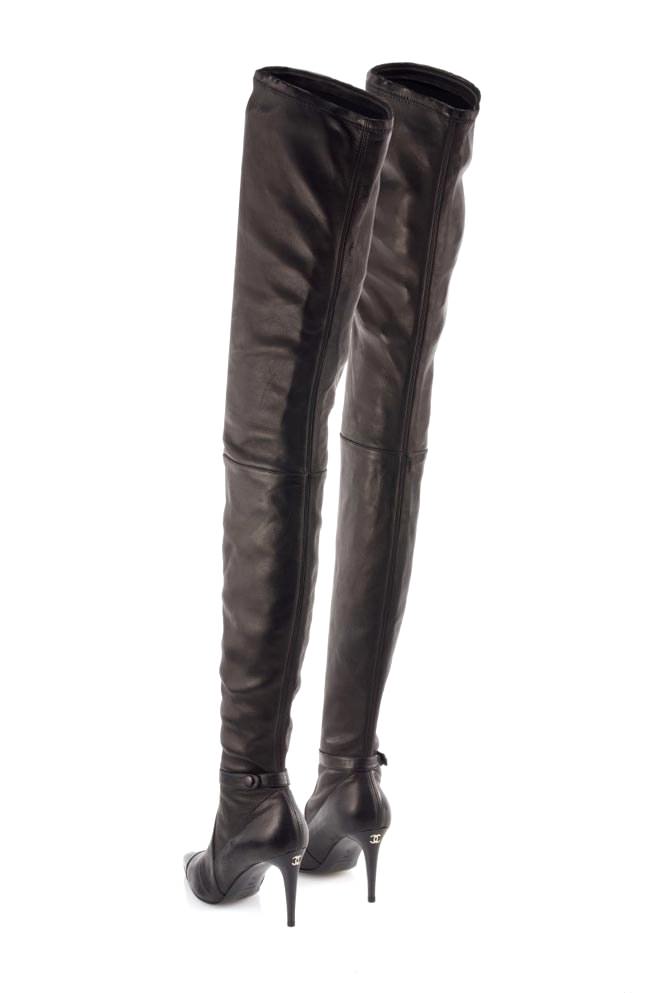 And what’s the point of a faux-folksy knit bag if it doesn’t have a big Fendi medallion hanging off of it? 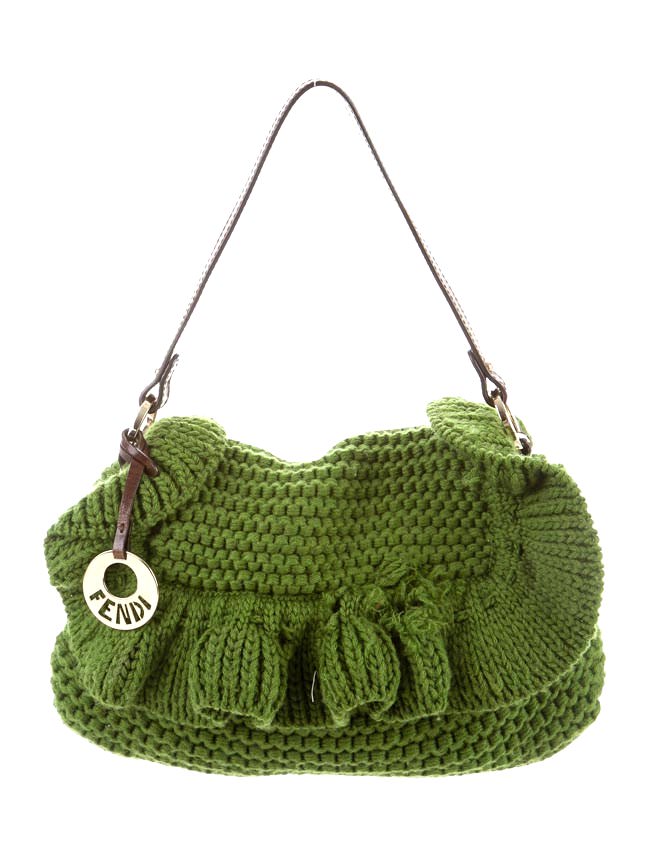 It’s also loaded with other rich-girl motifs that tend to make for terrible office wear but fantastic statements, like the heavy gold chains and the top with gold paillettes, which may as well be gold coins for all the obvious wealth signifying going on here. Again: her other high-style ensembles weren’t like this in their obviousness. This is a message being sent – not so much by Andy as on behalf of her, since Nigel is the one who put her in all of this. 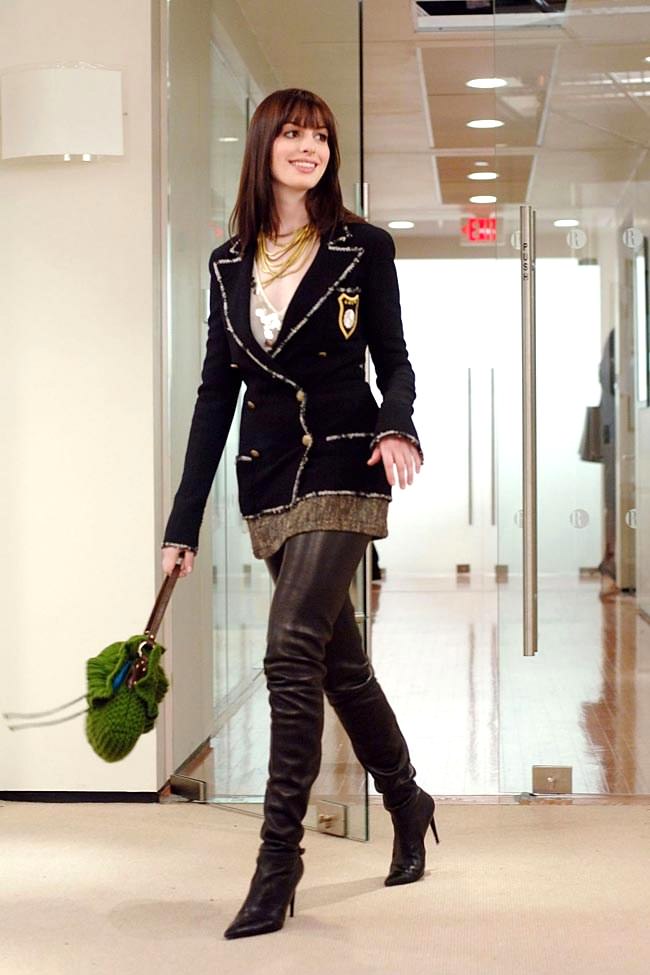 In this way, the costume is a commentary on 1) fashion as a pathway to confidence, 2) fashion as a signifier of class or insider status, and 3) fashion as a pleasurable and illusory (but dangerous) fantasy. Andy is not actually a rich New York insider, after all. All of these are recurring themes in the film. But it’s also, slyly, a commentary on how fashion is a language created and spoken by other people which needs to be interpreted and wielded by those who know how to speak it. In other words, Nigel is a stand-in for Pat Field herself; the savvy, smart fashion person with the soul of an artist who knows how to wield the tools in order to tell the right story. This is a costume about costumes, making statements about high-fashion using high-fashion. These are the reasons why it’s so iconic; because the statement is clear and pleasing, the underlying message is slyly self-referential, and – because Pat Field is so good at her job (and presumably so is Nigel) – she looks drop-dead stunning. The ultimate “Eat it, bitches” look on film.