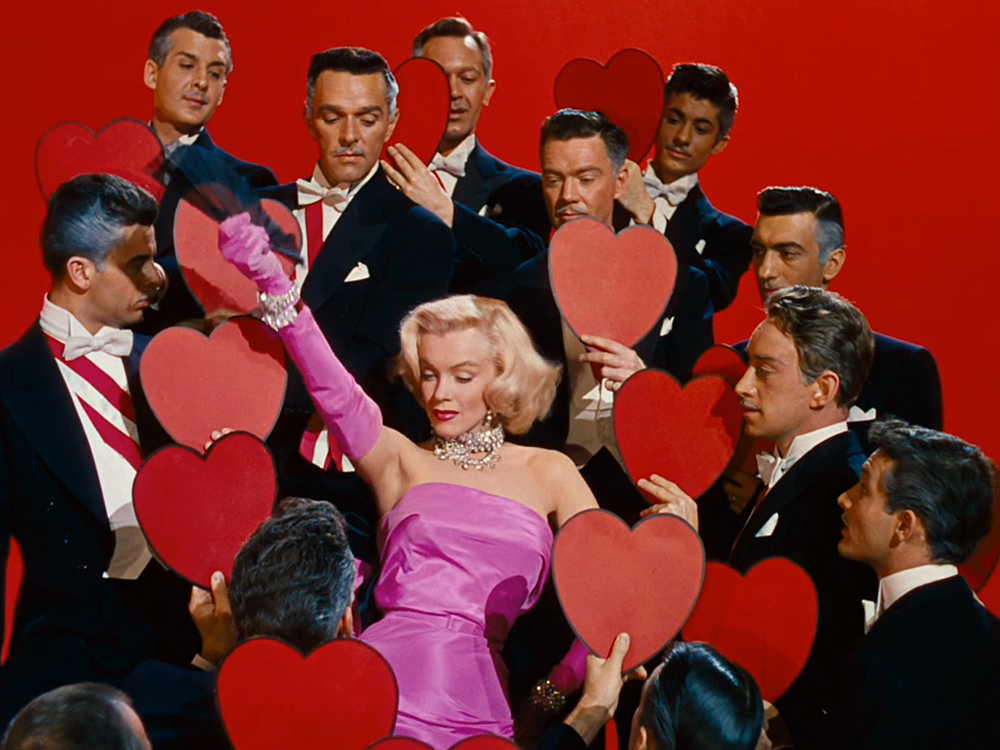 When it comes to iconic film gowns, this one may just be the most iconic of all – if for no other reason than the life it took on outside the bounds of this performance and this film. Of course we’re talking about the pink satin strapless gown with matching opera gloves worn by Marilyn Monroe in the 1953 film Gentlemen Prefer Blondes for the iconic number “Diamonds Are a Girl’s Best Friend.”

As if anyone needs reminding of this number, which is probably one of the most-referenced musical numbers of all time, just as this gown is one of the most iconic images of Marilyn. She didn’t originate the role of Lorelei Lee, but the character has become nearly indistinguishable from Monroe herself and tends to color the public’s perception of her as a breathy, coquettish, sexy savant who knew what she had and knew how to use it to her advantage. It is, after all, entirely what the song is about. And despite the somewhat bizarre fetishistic imagery in it (the men all kill themselves in the opening seconds, the other women on stage are either pliant ballerinas or literally objects), it’s very easy to read the song as a type of feminist anthem. To paraphrase Janet Jackson, this is a song about control – her control. It’s about a woman who understands what the world does to women like her and decides to not only exert control over the situation in order to procure the biggest, best longest-term benefit to herself… … but to teach other women to do it as well. Not for nothing, but the first minute of the song is Marilyn singing “No” roughly thirty times – and meaning it. She may look and sound coquettish, but she’s not playing that game at all.

Look at how big her movements are; how much space they take up: This is pure confidence. Total control over the situation. One of the characteristics of Gentlemen Prefer Blondes that makes it such a notable classic is how director Howard Hawks essentially made a classic buddy movie with two of the biggest bombshells of the period in the lead roles. This allowed Marilyn and her co-star Jane Russell to essentially strut through the film with the kind of confidence and control over the story not normally reserved for female stars at the time – and especially not in musicals. Go watch Russell swagger and eye-fuck her way through the film’s “Ain’t There Anyone Here For Love” number if you don’t believe us. These women were all about power, control, and looking out for each other. Men were side stories or play things. Our point here: This pink satin gown has become an iconic look not just because it looks so great on so many women and never really goes out of style, but because from its first glimpse onscreen and the next nearly seventy years it has remained a symbol of female control and empowerment while also indulging fully in classic feminine glamour and presentation. It’s a dress that has its cake and eats it too, if you know what we mean. A dress that says a woman really can have it all  – if “all” is defined as lifelong financial security, a constant string of admirers, and the chance to look fabulous all the time. The dress was designed by William Travilla, who was Marilyn’s favorite costume designer. He also designed the iconic white subway grate dress from the Seven-Year Itch, which is probably even more well-known than this gown. He clearly had a very good understanding of what looked best on Marilyn as well as what served her image and persona best onscreen. If nothing else, the dress is a marvel of fit and construction as she wiggles and bumps her way through the number. The gown was originally meant to be paired with black gloves, but Travilla switched them out for matching accessories at the last minute. Did you ever notice that the gloves were two-toned? Or that the bow (and the whole dress, according to wikipedia) was lined in black felt to keep it stiff and to appease the censors so that the dress didn’t look too clingy or revealing? That’s why it looks so heavy onscreen – and why the fit is loose enough to allow her to move around without any danger of the dress falling off. Technical details aside, it’s a gown that speaks of sex and femininity even as its wearer sings a song about money and security. We could get into the long history of pink in costume design as a coded color for femaleness (or as an even more coded reference to the vagina). We could talk about the history of the opera glove onscreen and how it was a shorthand for a sexually available woman, from Rita Hayworth putting the blame on Mame in Gilda to Natalie Wood wanting to entertain you in Gypsy to Jessica Rabbit slinking across a stage or Julia Roberts laughing as Richard Gere slams the jewel case shut. Suffice it to say, Marilyn is practically clothed in over a half century of tropes denoting female sexuality here. The juxtapositions of female sexuality and power are inherent in the costume and the entire point of the number. And they’re a big reason why… …This dress took on a life of its own, becoming a symbol of something larger, for generations that followed.

What’s notable about Madonna’s appropriation of the look for the “Material Girl” video in 1984 is that even though it’s a perfect thematic match to the song, which similarly deals with the thoughts of a woman who uses her sexuality to secure material wealth from men, the video actually subverts the original message behind the dress; positioning it as pure artifice. Madonna winds up falling for the man who woos her with daisies and a pickup truck. That he’s secretly rich and powerful compounds the contradictions even further. Madonna, the video’s director Mary Lambert and costume designer Marlene Stewart more or less put the “Diamonds Are a Girl’s Best Friend” homage on the cultural map, taking its feminist anthem origins and making it into something that begs for interpretation once a decade or so (See: Nicole Kidman’s version in Moulin Rouge and Christina Aguilera’s in Burlesque, neither of which utilized the iconic pink look, but kept the song’s theme of sex as empowerment). Madonna’s homage was a nearly flawless recreation of the original look, which served as something of a shock to MTV audiences of the day, since that level of pop star glamour and polish hadn’t been seen since the Supremes were Baby-baby-ing their way through the Ed Sullivan show. After the singer-songwriter divas of the seventies and the hard-edged girls of the New Wave era, Madonna’s old school serving of glamour not only changed MTV, but had a long-term effect on how female pop stars presented themselves – an effect that continues today in the high-glamour work of everyone from Beyonce to Lady Gaga.

In the previous post in this series we noted that if you can’t picture anyone else wearing the costume, it was a good indicator that you were looking at very good costume design. That’s still true, but the undying message of the legendary Pink Pussy Power gown is that it turned into something much more symbolic, much more interpretable; an icon formed from the template of Marilyn Monroe that continues to resonate as a symbol of femininity turned mercenary, of sexuality as a tool… In 2020’s Harley Quinn: Birds of Prey, director Cathy Yan, costume designer Erin Benach (notice how this look gets reinterpreted by female creatives, generation after generation) and star Margot Robbie served up a take on the template that took the fetishistic and violent subtexts of the original number and made them very much the text as Harley lapses into a dreamlike revenge fantasy in order to escape the violent beating she was about to face. Like Madonna’s homage, this one is nearly flawless in every detail, down to the buckle and the black-lined bow, but of course, the most notable change is that Harley’s in a jumpsuit rather than a gown. That’s another reason why this look resonates so strongly after so long a time: because you can make significant changes to it and still keep its message and all its thematic implications intact. This is still a song about control, even as it becomes something much more violent rendered as a fantasy in Harley’s head. As with the original version, with Lorelei performing the number on stage and as a rebuke to her fiance in the audience, and Madonna’s version, which was revealed to be a performance on a film set, Harley’s version exists separately from Harley’s actual story, continuing the through-line that this form of pink satin sexuality is a performance with goals attached to it rather than a sincere or passive expression of romance. And like Marilyn’s original version of the number, it illustrates her character and foreshadows her actions for the rest of the film. Without spoiling the whole thing, trust that Harley got the diamond at the center of the story and she got revenge on the men who hurt her. This pink satin fantasy was what she needed at that moment to regain control of the situation as well as her own fate. Miss Lorelei Lee couldn’t have done it any better.