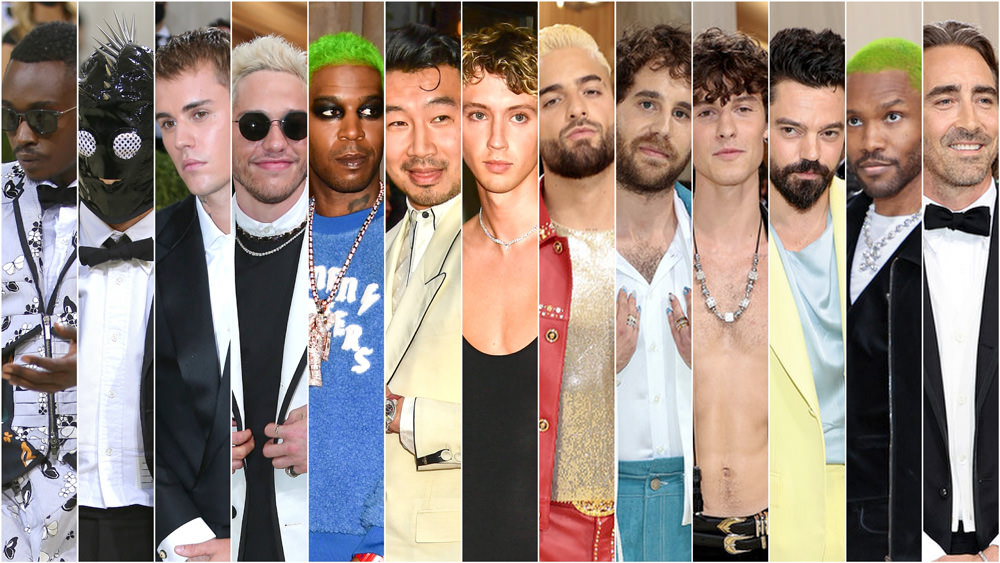 We’ve given the spotlight to some of the more notable menswear looks at the Met Gala this year (specifically Dan Levy, Timothée Chalamet, Lil Nas X, and Elliot Page), but it’s time to round up the rest of the notable guylooks of the night and judge them all in rapid succession. Let’s get to it. Thom Browne had a really good showing on the Met Gala red carpet this year, but we think we might love this one the most for being a bit more flamboyant than the classic TB suit. Love the print and the overly complicated design of the jacket. We want to like this for being fun, but we think the styling of his hair and beard make it look too much like a period costume. It also doesn’t feel formal enough for the occasion, but he’s far from the only man on this list to take things casual. For instance: It’s annoying how good this all looks on him. We’re glad he took the mask off; not just because it’s a kind of disappointing take on a gimp mask but because he looks amazing in that suit when you can see all of him. We’re going to take this as an homage to the great American Weirdo. We are yawning. And he’s standing weird. We would not have predicted that a classic Thom Browne schoolboy suit would look that ridiculously hot on a gigantic slab of man such as Lee Pace, but here we are. Some men can show up on a red carpet having done little more than run their fingers through their hair and look devastating. It’s not fair, but again, here we are. We really have to give the House of Versace credit. Between this rhinestone cowboy look and Lupita’s absolutely stunning denim gown, they did a fantastic job of marrying their alta moda glitz aesthetic to the interpretation of American fashion archetypes. That’s how you do it.

Having said that, you really have to be as drop-dead hot as Maluma to pull this off. We absolutely, 100 percent do not mean this in a mean-spirited way (and we think Pete might actually agree with us on this), but going with a “serial killer chic” look for him was actually a brilliant idea. He looks like the villain in a cult horror film and we absolutely 100 percent do mean that as a compliment. We cannot claim that we love this look, but since it’s one of the very few to pay homage to one of the most essential and influential American fashion styles of the last century – hip hop style – we feel like he’s to be commended; not just for paying it respect, but for being really weird about it to boot. It’s definitely not a forgettable look. Between this and his VMAs ensemble, we are thrilled at his sudden acceptance of his pop star status and his choice to stop dressing from the Banana Republic Office Collection. Attaboy. Lean into the hotness. Adopt the swagger. Don’t ever dress like it’s Casual Friday on a red carpet ever again. We guess it’s becoming a thing to leave the label tag on your suit jacket for the red carpet. On the one hand, it ensures that everyone knows who you’re wearing. On the other hand, it feels like it’s drawing too much attention to the fact that this is all borrowed and has to be returned. Anyway, it’s a sharp look and we love the concept, but we feel like the jacket needs a more impeccable fit for the outline effect to work. We’re in a time when seeing men in dresses and skirts on the red carpet is more or less commonplace. What we like about this version is that it eschews all of the draggy eleganza that so many celebrity men have worn and instead takes the male dress to an overtly sexual form of expression, combining traditionally male and female style motifs in one look. It’s hot and it’s forward-looking.