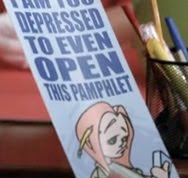 “I’m giving you full visitation rights to the twins that reside on my rib cage.”

Sometimes we feel totally at odds with the collective fandom of Glee. We always seem to be criticizing the episodes people loved most and loving the episodes people hated most. The thing with Glee is, it juggles so many different types of musical genres, character types and even TV show genres, that there’s no way now for one episode to please the entire viewership. Everyone’s looking at the show through their personal lens and set of criteria, which are quite often totally at odds with everyone else’s.

We heard through the social media grapevine that this episode was considered lame by seemingly a consensus of fans and prepared ourselves to be bored when we finally sat down this morning to watch it. Imagine our surprise when we realized that for us, this is probably the best episode of the season.

Was it the Bieber songs that set fandom off? We admit, the little babydyke does make for a convenient target for the public’s collective crankiness, but we thought both numbers were cute enough. Believe us, we have no dog in that hunt. We’ve never even heard a Bieber song before now and we’ve never seen him as anything other than what he is: the latest sexually unthreatening, androgynous teen idol; one in a very long line of them that stretches back over 50 years, most of whom faded away by the time they hit 20. He’s never merited more than a shrug from us.

Anyway, one of the reasons we loved this episode was that it was one of the EXTREMELY rare instances where the show managed to juggle plot, character, comedy and musical numbers and kept all the balls in the air at the same time. You’d think we’d be bored with all the teenage romance stuff going on, but we felt like it all made perfect sense. Sam’s a dork who lucked into good looks, Finn’s gotten cocky (and subsequently less attractive to every female but Rachel), Rachel is yearning, which is a better fit for her character, Santana’s the manipulative bad girl, and Quinn is indecisive and irresponsible with her affections. Not only is this consistent for each character, the dynamic has quite effectively blown up last season’s relatively simple in comparison Quinn-Finn- Rachel triangle.

Oh, and even if you didn’t love the Bieber covers…

We will simply have to stop loving you if you didn’t love this number. We exclaimed happily when the opening notes of this song started, like the queens we are. Have they never done a Rent song on this show before? That seems odd in retrospect, but this song matched with these two performers was a brilliant choice. Lea once again gets to delve into Idina Menzel’s songbook and Amber gets a chance to do more than provide the final note in a song. We love seeing these two together and we love that the established friendship between the two of them couldn’t be damaged by Sue’s machinations.

It’s definitely of the shameless heartstring-tugging school of drama, but the show has a long history of it at this point. After gay bullying, the developmentally disabled, quadriplegics, and teen pregnancy, of course they were going to bring in juvenile cancer at some point in order to Teach a Character a Lesson. We’re not going to pretend this scene didn’t affect us. A lot of that has to do with Jane Lynch, who’s fun when she gets to mug for the camera but becomes an actress when Sue is given even the slightest hint of complexity. Her facial expressions here were subtle and beautiful.

An unbelievable appropriate choice of song for Lauren, we have to say. Hilarious and fun and dead on from a character standpoint. They’re making us believe Puck’s relentless crush on her.

This was also a great number and we didn’t even mind the weirdness of Sue being on the team. This is EXACTLY the kind of song Sue would choose. Loved her plaid track suit.

So yeah, we don’t know about the rest of you kittens, but we really loved this episode. Not surprisingly, the heavily referenced “comeback” theme was a bit of metatext on the idea that this episode was a conscious attempt to return the show to form. We’d say they accomplished that.

“I mean, my carousel horse sweater should make me look like an institutionalized toddler but no; I look hot and smart. I feel like Michelle Obama.”

“I wore a tank top today because I thought it was summer. No one ever taught me how to read a calendar.”

“I have to get my cross-trainers. Wanna know why? ‘Cause I’m gonna be doin’ some runs.”

“When people look at you they don’t see what you’re wearing. They see a cat getting its temperature taken.”

“Here’s how I see it. I know I’m the hottest bitch in this joint. If I was a country my flag would be a fist giving the world the finger.”