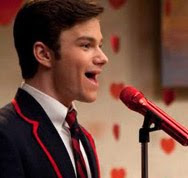 “I had a cat thrown at me in a nursing home once.”

Following the Glee pattern of a stunt episode followed by a more low-key one, last night’s show managed to avoid the usual Glee pitfall of overshooting “low-key” and hitting “boring.” It took us a while to get into the groove, but we liked this episode. The show is at its best when it’s exploring teenage relationships. And just as we remember it, the relationships range from relatively healthy and happy, to confusing and precarious, to heartbreaking and painful. And also, just as we remember high school, it seems like any of them can change drastically at any moment.

Our first reaction to Puck’s wooing of Lauren was that it was another stunt in the vein of the time he dated Mercedes, but they really seem to be going for it on this one. “Fat Bottomed Girls” was hilarious not because Lauren is a big girl, but because Puck is so dimwitted and clueless. Plus, the reactions of the other girls were pure gold, as was Mr. Schu’s world weary high school teacher moment.

The thing is, the only place they can go with this potential relationship now that they’ve set it up is to take it all the way. Not in the sexual sense, but the storytelling one. If they drop this arc or don’t take it all the way to a full relationship, then this was a stunt and frankly, one at the expense of a plus-sized character; an extended fat girl joke. If they DO have the balls to take this all the way, then we’ll respect them for doing it. Time will tell.

Cute. Not much to say except we’ve finally accepted that Artie and Tina aren’t getting back together (we’re making that sound more difficult for us than it actually was). Artie and Mike make such a great song and dance act that we hope they use this pairing more often. They’ve got chemistry.

What to say about the gayboys…

Well, we liked that Kurt didn’t just collapse under the realization that Blaine wasn’t in love with him. His response was refreshingly realistic; pained, but not treating it like the end of the world for him. We also liked seeing a little more evidence that Blaine is not the perfect character Kurt originally saw him as. As well-crafted as that number was, it was painful to watch; getting increasingly frantic and desperate as it went on. It’s not that we ever staged elaborate song and dance numbers in public when we were teenagers, but we could cringe and relate to that all-too-common feeling of misreading social cues and providing the response that guarantees the maximum amount of embarrassment. It was nice to see Kurt be the one with his head on a little (you’ll pardon the term) straighter than Blaine, at least in this instance. He’s been too often mooning and lovestruck, but we enjoyed seeing him have a grownup response in this instance.

Okay… does anyone want to explain that one? It was …kind of? Funny?

We think Jenna is sadly under-utilized for her comedy skills. We’ve lost count of the number of times we’ve laughed at her reactions in the background. She can give Heather a run for her money in the funny department. Still, this was kind of weird, no?

This is the Rachel we like to see: heartbroken and wailing her heartbreak through the halls of the school. It’s not that we like to see her hurt for our personal satisfaction, it’s just that when you give a character like Rachel the quarterback to date and the admiration of her peers, she quickly becomes insufferable. A character like Rachel needs to want something for the audience to root for her. Once she has it, she starts sounding obnoxious.

Having said that, we don’t know what to think about the silliness going on with Quinn and Finn. We do love when Santana’s given an opportunity to be a huge bitch, though. Face it: she’s hilarious when she gets to unsheath the claws.

Cute. Although we have to be honest and admit that, while we fell in love with the Blaine character the moment he sang “Teenage Dream” to Kurt, he’s right on the verge of becoming overused on this show. We would have much rather seen Mercedes sing a bluesy song about not having love in her life, rather than give Blaine another chance to be cute and sing a pop song. And when are the other Warblers (or at the very least, Kurt) going to point out that he’s a microphone hog?

All in all, we thought it was one of the better episodes from a writing standpoint. As per usual with Glee, you can have one of the following in any given episode: plot, amazing musical numbers, side-splitting comedy. This time, we got plot, and that was fine by us.

Not really feeling the funny quotations from this week, except Brittany’s hilarious (and adorably proud) “That’s my man and his legs don’t work.”