So much for the idea that the gore was just harmless and cartoon-like in nature. We immediately 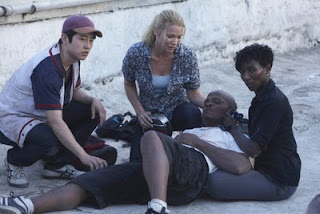 switched over to the Golden Girls the second this episode ended. Nothing scrubs the brain free of heavy thoughts like those lovable old bitches.

We had a couple of problems with the writing this episode but there were as many things to love as to complain about. We’ll accentuate the positive by starting with the parts we loved.
First, the storytelling is refreshingly linear. They picked up this episode exactly where they left off the last one and so far they’re not getting cute with the timeline by bouncing back and forth. They’re not holding back on the character introductions and they’re letting the audience know the relationships ahead of time even if the characters don’t yet. Rick doesn’t know that the group he’s hooked up with in Atlanta comes from the camp where his wife and son are staying, but we do. There’s something appealing about how they’re letting the story unfold in a simple linear way.

Then there’s the action. We were on the edge of our seats through a good 70 percent of this episode. The escape from the tank and the frenzied rush to get inside the department store, the dick measuring contest on the roof with the rather disappointingly cartoony racist, the (to coin a phrase) daring escape plan to get out of the store and out of the city; these were all the most heart-pounding scenes in the episode and not coincidentally they all revolved around the character of Rick. 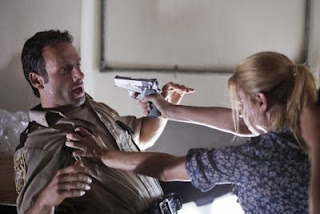 We’re really starting to dig Andrew Lincoln’s work here as he manages in one episode to pivot from Barney Fife to John Wayne, make the transition totally believable, and still manage to exhibit no small amount of charm in the process. It was The Hero’s Journey in 60 minutes with commercials. And it was very deftly done. One of the things we found endearing about Rick in the pilot (and a little frustrating about him in the beginning of this episode) was that he wasn’t the flawless action hero and he screwed things up left and right, exactly as any average person would when thrust very quickly into a survival scenario. It’s helpful to the story that he has a law enforcement background but it’s helpful to the character that it was mostly of the small town low-key variety (pilot episode firefight notwithstanding). It makes him easier to identify with, plus he provides the viewer someone to yell at, plus we get to watch him grow. It’s a perfect balancing act which could reap major benefits down the line so long as Lincoln and the writers can pull it off. Nothing engages an audience more than a character with whom they’ve traveled a long way. “All I am anymore is a man looking for his wife and son. Anyone gets in the way of that is gonna lose. I’ll give you a moment to think about that.” We have no doubt Rick will continue to be tested and continue to occasionally screw up, but for that moment, he was the hero. Officer Friendly.

The other thing we loved, oddly enough, was the gore. We just shook our heads and marveled, “Man, the 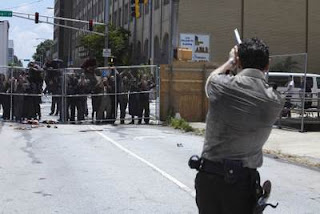 y’re really going there, aren’t they?” If you can open your series by shooting an adorable little six year old girl in the head, we guess wearing human offal is the next logical step. We couldn’t help but kind of admire the commitment to being truly horrifying. And yet, as horrifying as the gore was – and it was definitely pushing the boundaries of basic cable – it did in fact become less horrifying the more we were exposed to it. It wasn’t so much that it was cartoonish in nature as we became numb to it.

And that makes a perfect segue into the parts we didn’t like. The staging and direction of some of the scenes were distractingly bad and the corpse-butchering is one of the more glaring examples. Why on earth would any of those people stand and watch that? There was no logical reason for it and human nature would dictate that most of them would stay as far away as they could. Yet they all stood around in a tight circle, retching and moaning and never taking their eyes off the spectacle. People just don’t act like that.

Second example. There is a hoard of frenzied zombies beating on the glass doors of the department store – and the glass is already cracked – so Rick and Andrea decide to have a tender moment mere yards away and do a little jewelry shopping. What the fuck? When certain death is howling its fury at you and the only thing separating you from it is a piece of glass, put down the fucking tacky mermaid jewelry and get the fuck away from the doors, people. We find the bumbling to be endearing, but not when it turns into actions that simply make no sense at all. 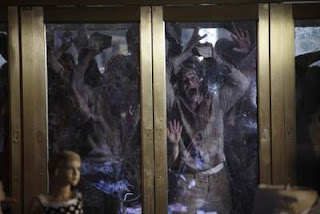 The other major glaring flaw was in the introduction of the character of Merle Dixon. The writers set up a pretty daunting task for themselves when they decided to introduce so many characters at once. You’re risking an awful lot of clunky expository dialogue and slightly overcooked emotions in trying to quickly establish so many personalities and dynamics while still keeping the action moving. Out of the newbies, we got pretty good sketches of Glenn and Andrea, the rest of them were more or less ciphers (red shirts, we’re thinking), and Merle was a slightly ridiculous over-the-top caricature of racism.

Granted, they established that he was coked up and we’re not naive about how ugly racism can be, nor do we think everyone will act logically come the post-apocalypse, but even taking all that into consideration, Merle was a bit much to take. His dialogue, from sugartits to the N-word, lacked any real subtlety and took away any real chance for the audience to come to any realization about him. Literally from the second he’s introduced, every single thing he says or does screams “I’m a worthless hateful piece of shit! Hate me!” And much like the bumbling being taken too far, Merle’s mustache-twirling evilness crossed over to a point where 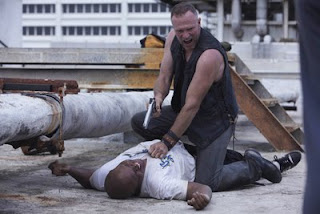 his actions made no sense. They were in the middle of desolation and danger with little chance of survival. Even the Grand Wizard of the Klan under those circumstances would refrain from beating the first dark-skinned person he encounters. It just made no sense. It’s obviously a setup for a bigger story (because come on, we haven’t seen the last of Merle), and you can’t have a “breakdown of society” story without demonstrating exactly what happens to people without laws, but there are subtler and less cliched ways of going about it.

In a (somewhat disappointing, we have to admit) reversal of the pilot’s take, this time the action and the tension took center stage while the character work and stage-setting felt a bit secondary. It seems to us that, while we absolutely loved the tension of this episode, the show works best when it’s focused on the character stuff. There wasn’t a scene this week to match the emotional whallop of Morgan trying to work up the nerve to shoot his wife’s walking corpse in the head, ending both her agony and his.

Still, we were enthralled through the most of it, despite some clunky dialogue and poorly conceived introductions and stagings. Of the new characters, we like Glenn and Andrea, mainly because they were the only ones any work was put into. But the action was top notch and the tension was stratospheric. And even if the character work and setups weren’t as elegant as they were last week, the fact that they were willing and able to take the story into unexpected and shocking areas is a testament to the overall storytelling ability at play here. A slight disappointment in some ways but we’re no less excited. 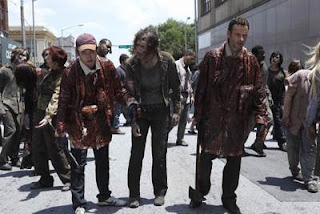 * “If bad ideas were Olympic events, this would take the gold.” “Yeah, the refugee center. They’ve got biscuits waiting in the oven for us.” People don’t talk this way. Sometimes the dialogue can get a little comic-booky.

* Interesting that none of the survivors believed Rick really saw a helicopter.

* T-Dog (and don’t even get us started on that) dropping the key down that tiny little shaft was a bit much for us to take. There were better ways to do a “leaving a man behind” scenario than having it all come down to a pratfall with some dubiously poetic results.

*Shane is turning out to be one seriously off-putting character. Even if we can overlook the affair with his partner’s wife, the way he jumped on her in the woods was just a little creepy. Plus he doesn’t appear to be much of a leader. He basically wrote off the scavenging team the second they got in trouble. It’ll be interesting to see what happens when Rick shows up in the camp.

Previous post:
We Can’t Stop Thinking about The Walking Dead Next Post:
Boardwalk Empire: S1E8: Hold Me in Paradise