It seems fitting that Nucky would finally make the shift from politician to organized crime boss while basking in his political power and throwing his weight around, becoming a kingmaker in the process. At the height of his political game, he realized it’s not enough because he’s at war. Even more fitting, h 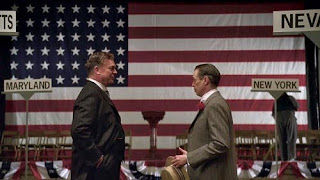 e turns to the man who originally admonished him for thinking he can be “half a gangster,” his surrogate son, Jimmy. We didn’t even realize it was a theme of the season, but we’re watching Jimmy “grow” into the new role he was less prepared for than he thought when Prohibition came down. While the politicking and backroom deals will never really go away, Nucky’s come to the realization and acceptance that he’s in a full-on crime war now and it’s never really going to let up. It’s an exhausting realization and it both saddens him and strengthens his resolve.

One of the things we really like about BE is that it’s generous with the screen time for the rest of the cast. Angela, Gillian, Eli, Jimmy, Richard, Rothstein, Torio, Capone, Margaret, Lucy and Van Alden all got appearances, many of them to advance their own plotlines. Compare that to Mad Men where you might not see, say, Pete or Lane for three episodes. We’ll be honest, it’s part of what makes writing about an episode of Boardwalk Empire so daunting. There’s so much to keep track of. We’re just going to run down the list with our thoughts on the various develop 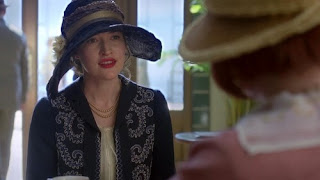 Let’s start, as we’re likely to do, with Margaret. Can it be that she really didn’t know Nucky was a bootlegger? That seems unlikely given her general intelligence, the various times she’s been around him in drinking situations and establishments, and the fact that she first gained Nucky’s admiration by ratting out the beer distributorship behind her old house. We suppose that look of shock on her face could be read as her realization that knowing he’s a bootlegger, actually having the evidence staring her in the face, is a powerful position to be in for such a smart person. Remember, everything Margaret has done she’s done to achieve a certain lifestyle and level of security for her children. “It’s not so bad, is it?” asks Annabelle and before she can answer that, Lucy stumbles onto the scene to get her digs in (“Is that Irish for bitch?”) and remind her that she’s living in a house of cards. “You think you know him?” she sneers to Margaret. Well, with that ledger staring her in the face, she knows an awful lot more about him than most people do. “I prefer to rely only on you,” he told her. “Can I do that?” Can he?

In fact, as Nucky threw his weight around, making kings and rallying an army for war, he was also revealed to be in a very precarious position. He admitted as much to Eli. It’s clear he doesn’t really want to turn to Jimmy. Maybe in time he’d have wanted him to come home 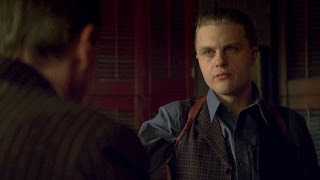 instead of needed him to (as Jimmy astutely observed), but he’s not there yet. “Somehow James, we’ve all been managing to get along without you.” Turns out, not so much. And poor Eli had to pay the price for Jimmy’s stubbornness about what they were really facing. Not that Eli’s such a likeable character, but we couldn’t help feeling a little sorry for him this episode. No one cares who’s in charge if Nucky’s not in charge. Putting him behind the desk was purely a symbolic move on Nucky’s part to appease him a little.

As for Jimmy, there was never really any doubt that he was going to return to Atlantic City at some point. The scene with Torio’s gang all speaking in Italian was a little heavy-handed coming right on the heels of Nucky telling him, “You’re Irish, Torio’s Italian. You’ll always be an outsider.” Still, it’s a different Jimmy from the one who left AC and it remains to be seen if Nucky can really treat him like a partner instead of just an underling. Jimmy’s not the mumbling frustrated blockhead Eli is. He’s smarter and colder than Nucky realizes.

Of course, even with hat 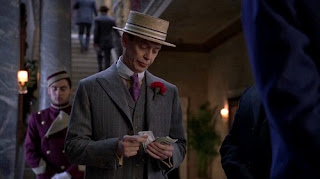 in hand or on the verge of a war he’s not prepared for, Nucky’s still got to throw his weight around. Even to the point of bribing the Presidential suite away from an actual Presidential candidate. “I, on the other hand, am a magnificent tipper.” He made it clear he needed Jimmy, going so far as to make him a partner, but he had to end the meeting with “Don’t ever make me wait again.” Even before leaving Chicago to tend to his business affairs (and only tangentially with his wounded brother), he managed to make some hefty political alliances as well as some nasty payback for Senator Edge, who thought he could get the better of him. But that’s the old Nucky; the backroom dealmaker. Of course he’d be at the top of his game in that arena. It’s whether he can come out on top in a crime war that remains to be seen. With Jimmy on board, and especially if Richard Half-face comes with him, his chances are a lot better. Neither of them have the slightest qualms about killing and Nucky clearly does.

And then there’s Van Alden, incorruptible even in the face of his wife’s despair and potential hatred. We admit, it took us two viewings to realize what was going on there. He’s been intercepting Jimmy’s payments to Angela and for a second, we were faked out that he was going to use the money to pay for the fertility treatments (whatever the hell they could have possibly entailed in 1920), but instead he told his wife to trust in God and sent the money to 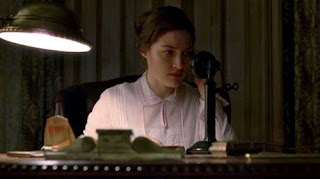 its rightful recipient, who desperately needed it. What’s going to happen when Jimmy comes home? Gillian obviously knows about Angela’s affair with Mary and she clearly doesn’t like her all that much. That’s a potentially explosive situation, depending on who gets pissed off at whom in that family.

We admit, we’re not sure what’s going on with Rothstein and the Black Sox scandal and how that’s going to affect Nucky. We’re also not sure what to think if Harding’s mistress and her baby. Nucky’s making a shrewd move by offering to take her off the campaign’s hands for the forseeable future, but what the hell is Margaret going to think of this girl living in her house? Especially if she continues to show a predilection for reading aloud the love letters she received from the Republican Presidential candidate?