Home » Television » We Can’t Stop Thinking about The Walking Dead

We Can’t Stop Thinking about The Walking Dead

People (not many) have asked, “T Lo, what happened to your The Event posts?” Well, here’s what happened. The last episode that aired had so little forward movement on the plot that we couldn’t string together more than a couple sentences for a review and then a week went by without an episode and we realized that we didn’t miss it. We’re still going to watch the show and if something interesting happens (like, it doesn’t get canceled) we’ll consider picking up episode-by-episode blogging. For now, it’s on blog hiatus, to steal a term from TV actors who don’t want to admit that their show’s been canceled. 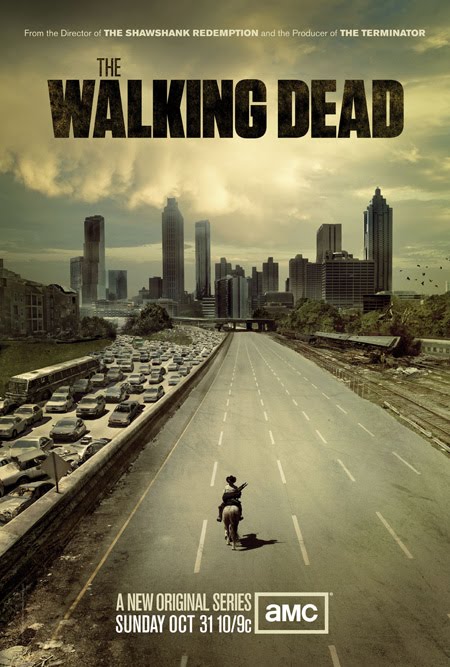 In other TV blogging news, people (not a lot, but a sizable number) have been screaming at us for a while to drop all these c-list adventure shows and blog Fringe. We seriously considered it, but we had some reservations. Why? Because our relationship with the show is a rocky one. We never saw the first season until after it aired, got hooked, started watching 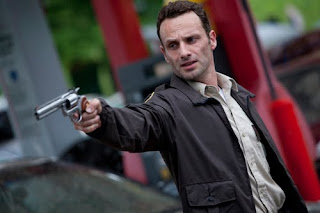 season 2, got bored, stopped watching, heard good things and came back just in time for the finale, got excited about the show again. Season 3 starts, and it’s all cooking like never before. We’re in for the long haul. The thing is, we sat down and watched it last night and found we had little to say about it. It’s not the kind of show that, for us, is going to inspire weekly posts. We might check in now and again and do occasional write-ups, though. Last night’s episode….well, let’s just say we’re getting a little tired of the Earth 2 stories and we want to see some forward movement on the trapped Olivia storyline. Granted, she traveled to the other side and spoke to her niece, so that’s a step in the right direction. Here’s hoping Jiminy Peter can snap her out of it enough to get her to move. TV Squad’s Mo Ryan has a great little writeup on the show’s evolution here.

No, the shows we planned to blog or considered blogging aren’t giving us enough material to work with. It’s the show we had virtually no interest in that we can’t shake off, AMC’s The Walking Dead. Actually, that’s not quite true. We had interest in it because it was so heavily promoted all summer and because AMC is proving itself to be the #1 programmer for cable dramas. But neither of us are big on zombie movies. Yes, in case you hadn’t heard, The Walking 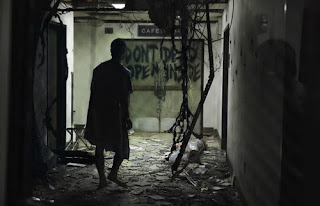 Dead is essentially a classic zombie movie turned into a TV series (although if you want to be technical about it, it’s a comic book series turned into a TV series). Lorenzo couldn’t be talked into watching it because he’s a gore-phobe. So Tom watched the premiere episode on Halloween night. Then he watched it again the next day. Then he watched it 4 times in total since then, the final time with Lorenzo, whose curiosity was piqued and who agreed to watch it if Tom gave him warnings about upcoming gory scenes (“Okay, look down. Okay, you can look back up again.” “Intestine alert!”).

True Story: Tom stayed up very late the other night to watch the pilot for the third time. Around 2 am, and right in the middle of a very quiet, very tense scene, the newest kitty started making a godawful racket downstairs, her mournful howling filling the house and turning Tom into something of a pussy himself. Gathering his courage, he paused the DVR and slowly snuck down the darkened steps toward the noise, fully expecting to find a zombie kitty with a half-rotted (but nonetheless still adorable) face, ready to eat him. Instead he found her standing proudly over the carcass of the fly she just killed, howling her triumph to her ancestors.

Not that the show is horrifying. Creepy, yes. Tension-filled, like you wouldn’t believe. There is gore and we’re not gonna lie, it’s occasionally boundary-pushing gore, as far as basic cable 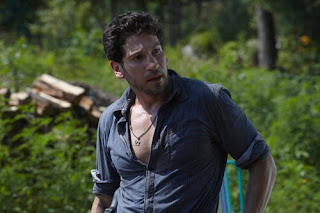 goes. But it’s also, well, cartoon gore in a way. The show isn’t built around the special effects scenes. It sounds a little trite but it’s about the characters. For a so-called “horror” show, it’s a surprisingly quiet and affecting character piece, as we are introduced to the new status quo of the post-zombie apocalypse world and how its survivors are handling it, especially those who lost loved ones to the plague. There is one scene in particular that had us close to tears as two of the characters came (almost) face-to-face with their formerly living family member. In fact, it allowed for one of the most devastating performances we’ve seen all year. A very haunting scene, and if you saw it, you know which one we’re talking about.

We’re not going to recap the first episode so much as to recommend it. There IS gore, however. If you have no stomach for that sort of thing, you might not be able to handle it. BUT, and we can’t stress this enough, it’s not about the gore. It’s about the characters and the eerily quiet status quo, at least at this point in the story. We don’t pretend to know where things will go from here (and we ask that those of you who DO know to refrain from spoilers in the comments section). All we know is it was one of the most haunting television experiences we’ve had in recent memory. Even if we hadn’t watched it multiple times it still would have stuck with us. Well acted, written, and directed with a setup that intrigues and opens up virtually limitless storytelling possibilities. Plus, hot men.

Catch it; it’s On Demand under A 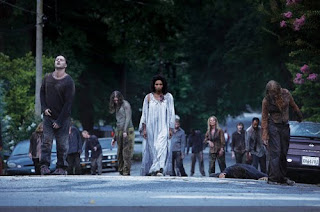 MC or you could just head over to the AMC site because they have the full pilot episode online. We are definitely adding this to the blog roster, which means we’ll have more in-depth reviews of the remaining 5 episodes of this season.

As for shows like The Event or Fringe, well… we watch a lot of TV shows that never seem to warrant weekly reviews or recaps, so we’re thinking of doing a general “Fighting Over the Remote” post each week or so to let you in on the other T Lo favorites or to do occasional recaps of shows that we can’t get to each week. And once you see what’s on our Guilty Pleasures list, you’ll lose all respect for our erudite TV-blogging capabilities. A lot of HGTV and Bridezillas at play in T Lo Manor, kittens.