We’re nothing if not master procrastinators. We said we’d have a piece up about HBO’s Boardwalk Empire before the next episode aired and we have; getting it in under the wire with mere hours to spare. Originally we figured we’d do a The Story So Far… type of post, but honestly, there’s 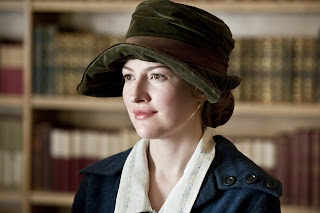 not a lot of story yet. What there is, is a TON of backstory. And more characters than we can possibly keep track of, at least not at this stage in the proceedings. It was too intimidating a post to write with 5 episodes aired already, so we kept putting it off. Today we sat down to write about it and God help us, every other sentence had the words Mad Men in it. Maybe we have the Sunday Night Blues now that the season has wrapped, but we found it more interesting to talk about why this show should go into your viewing roster now that the world of Sterling Cooper Draper Pryce has left us for another ten agonizing months. 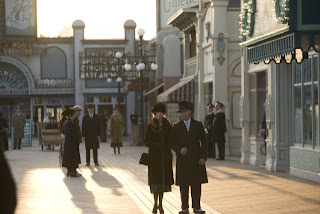 When you think of the 1920s, you think of organized crime, yes. But you also think of jazz babies and flappers and art deco styles. You think of violence and speakeasies and talkies and finally, an epic crash to end it all. Just as Mad Men was initially full of characters stuck in the 1950s and unprepared for the seismic changes ahead, so too is Boardwalk Empire populated by people living on the explosive cusp of the 20th Century and thinking that they’re still in the Gilded Age. Social and economic change is coming on an unprecedented scale. Nothing represents that better than the cocky, baby-faced Al Capone, who’s merely a side player here, his presence a constant reminder of what is to come.

Steve Buscemi is at the center of things as Nucky Thompson, a local Atlantic City politician who is as corrupt as the day is long. As Prohibition becomes the law of the land, he is out in front of just about everybody in terms of seeing the financial possibilities behind political change. 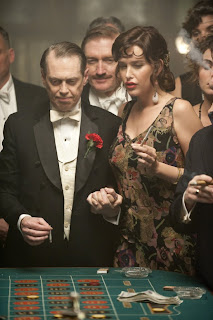 He’s a combination of Tony Soprano and Don Draper; morally conflicted, potentially deadly, but brilliant and powerful and the center of his universe. Unfortunately, Buscemi is a character actor (and a great one) but not a leading man. The sooner the show realizes he’s not Jon Hamm or James Gandolfini, the better off it will be. He’s very good in the role, but there’s too big a cast to expect an actor like him to dominate. They’ll be better off as soon as they realize it’s an ensemble piece and not a character piece.

And they do seem to be realizing that as many of the characters’ stories become more and more compelling, none more so than that of Margaret, the seemingly naive and strictly lower class wife and mother who finds to her surprise and ours that she’s savvy and can move through the halls of power with an ease that’s as intoxicating as it is surprising. She is the Peggy Olson of the story and the one character whose actions you will be likely to cheer even if you don’t always agree with them.

Like Mad Men, Boardwalk Empire is obliquely but deliberately sketching a broader picture 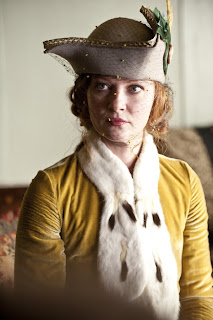 Stylistically, it’s got a lot of Scorsese stamped all over it, for good or for ill. It’s very much a Boy’s Story, with a somewhat more testosterone-fueled vibe than even the casually misogynistic Mad Men. These are gangsters, after all. We’re in the world of tough guys and wannabe tough guys. 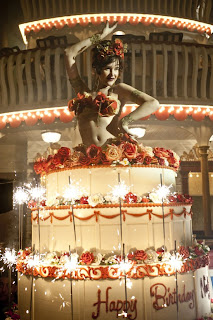 There is violence, and crudity, casual racism and misogyny. But like Mad Men, it tells a larger story than the one we’re seeing onscreen. As with every gangster story, there are molls and dolls, from the slappable Lucy to the unflappable Margaret, as well as the long suffering and secretive Angela and her common law (and unlikely) mother-in-law Gillian, who also seems to have more than a few secrets (and possibly an agenda) of her own.

Plot and pacing-wise, it makes Mad Men look like a barn-burner. The story so far is quite slow-moving and to be perfectly honest, it took more than a couple of episodes to reel us in. Even then we find ourselves getting impatient with the proceedings. It’s mostly atmosphere and character in the early episodes, with a lot of setup for plotlines to come.

But like Mad Men, atmosphere and character are good enough for now, at least if it’s going to be presented as beautifully as this. The Atlantic City 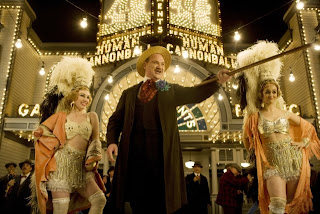 boardwalk set, not to mention all the sumptuous interiors, are eye-popping and you can find the same obsessive attention to period details in decor and clothing as you enjoyed with Mad Men. It is, if nothing else, a feast for the eyes. But thankfully it is more than that and each week the writing gets a little sharper and a little tighter, the characters become a little more familiar to you, and the web tightens around as you the story lines start to pull you in. There’s a sense of foreboding mingled with a sense of the thrilling, not unlike, we would imagine, what the world was like just after the War to End All Wars and just before the explosion of the Jazz Age.

We’re a little intimidated by it, but we’re looking forward to blogging this one.