We’re big gays who do gay things and see the world through gay eyes, so you’ll have to forgive us if we sometimes go light on the details with this show, except in those instances when something really imprints itself on our brains. 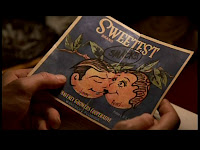 his gigantic swinging penis in Jimmy’s mom, thinking she’s Jimmy’s wife, and that’s somehow not part of the plan to do whatever it is he’s supposed to do. Jimmy gets back at the Irish mob for pushing his hooker girlfriend to suicide and he and Al Capone trade insults back and forth. Something-something Greek town. Nucky’s mad at the Italians. Something-something roadways, senator, Jersey City.

In more important news, Crazy Fucking Lucy has another showdown with Margaret and the little Irish girl simply isn’t having it anymore. Catfight in the dressing room, y’all! “Maybe your cunny isn’t quite the draw you think it is.” POTATO GIRL FOR THE WIN. We simply MUST work that insult into our daily repertoire. We especially look forward to trying it on snotty waitstaff. Gotta give it up for the 1920s woman. They don’t fuck around, whether they’re clawing their ownership right into a man’s skin or douching with Lysol, it takes a tough dame to navigate the world of organized crime.

We joke of course, but we really do tend to pay more attention to the women’s storylines if 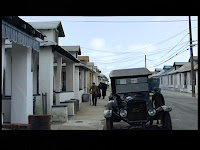 only because they’re simpler and they touch on larger social issues, which gives them a bit more depth (at least to us) than a simple gangster-vengeance storyline.

But we’re probably not being fair even then. Jimmy and Al’s “friendship,” which Jimmy more accurately characterizes as “accomplices,” remains one of the more fascinating of the show. Al is mostly a monster, although his pain over his son’s deafness does a lot to humanize him, even if he expresses it to his family in the worst possible way. Jimmy is smart and quiet, but he still pushes up against Al if he doesn’t like what he’s doing. On the one hand, you’ve got to admire him for the stones. On the other hand, every time he pisses Al off, history comes bubbling up to the surface. Given the inevitability of Capone’s rise, everything Jimmy does in Chicago tends to keep us on the edge of our seats. Depending on which way Jimmy decides to react in any given scene, we think he’s on his way to major power in the organized crime world or he’s on his way to an early grave. He’s either getting into dick-measuring contests with him, or he’s awkwardly hugging him over a gift of steaks. We may 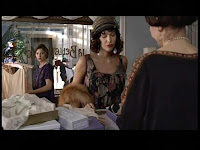 love watching scenes of Lucy and Margaret baring their claws (as well as their tits) to each other, but every scene with Jimmy and Al has us literally holding our breath.

And speaking of which, the showdown with the Irish mob was a beautifully directed and acted sequence. The tension was almost unbearable. When the hooker showed up behind the coat check counter, we almost wanted to cheer, which is kind of horrible of us, isn’t it? Oh, well. They deserved it after what they did to Jimmy’s girl. The rise of the Italian mob and the relative decline of the Irish mob is a theme of the show, it seems. “Those fucking Italians. They don’t respect the rules.” And like all themes, it’s played out in 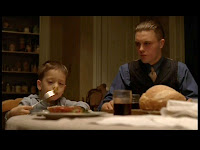 The other great thematic struggle here is that of a person fighting against their own nature. Van Alden is willing to scar himself in order to keep himself in check. Nucky’s not quite so disciplined and can’t even keep his dick in his pants when a naked ukelele player kneels at his feet. Nucky’s pathetic “I try to be good,” when in fact, we’ve never seen the slightest effort on his part, is as much a dysfunctional coping mechanism as Van Alden’s flagellation. Both men are pretending to have a morality they don’t have. It allows them to continue doin 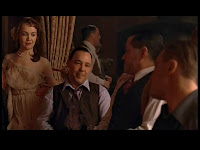 g what they do without having to question it too much. Nucky can shrug off his lousiness by claiming an inevitability and Van Alden thinks he can beat it out of himself.

Margaret is perhaps the one struggling most of all with her nature vs. her actions. She really is our favorite character simply because she’s gone through so many changes in such a short period of time and each time, both the change and her reaction to it are somewhat surprising. Plus, she’s a bit of an enigma. She’s moral, or at least she likes to think she is. But the mores of the time (and even today) would proclaim her choices this episode to be at least a little suspect. “She’s a 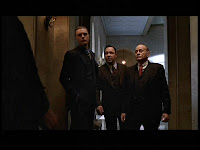 whore,” says her former neighbor more bluntly than we’d put it. Or a “concubine” as the fabulously dressed neighbor classified it. Either way, we wouldn’t have believed she’d go down that road as quickly as she did. She’s got a spine and she’s capable of overcoming great hardship, as evidenced by the dry recording of her arrival to America that spurred Van Alden to his little act of pseudo-Onanism. If she can survive her vomiting, miscarrying introduction to the shores of America as little more than a kid, then she’ll do what it take to make sure her own kids don’t grow up in poverty.

And the writing made clear that there was at least some support for her decision from more practical quarters. The surprising acceptance from the Temperance League lady who all but gave Margaret her blessing illustrates a point about social change and how it develops in the trenches. It was, in many ways, a feminist response from a 1920 perspective. It’s a time 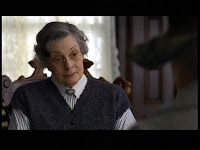 when things are so bad and yet so close to improving for women that the smart ones don’t have time to waste on niceties. You need to feed your kids? Be that concubine and hold your head up high. And douche with Lysol.

She’s going to need that steel resolve, because she’s not only in a precarious position in terms of her own morality, she’s also put herself and her family in danger. Surely we can’t have been the only ones that noticed Lucky’s presence in the room when her 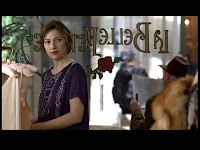 name was mentioned. It’s bad enough she’s got Lucy constantly flashing her “cunny” in her face and bringing the crazy; she’s also got Van Alden literally whipping himself into a frenzy over her and Lucky Luciano has her name filed away somewhere in the back of his brain as a way to get back at Nucky. And all of these developments – every single one of them – are entirely because Margaret sought them out. She was a nobody who’s suddenly become a somebody and none of it was by accident. It’s not that we think she’s a mastermind. In fact, she’s been winging it the whole time. What she is, if you’ll pardon the term, is cunning. With all these people taking a not-so wholesome interest in her, there’s a part of us that can’t wait to see how she’s going to handle it.

On the other hand, she could get killed pretty easily.