As we said in the previous installment of Mad Style, we feel like our best work in this series is behind us and we’ve said just about everything there is to say, at least when it comes to the female characters. Because this is the last episode for a distressingly long time, we chose to highlight quite a bit, so there are a lot of pictures. We say “highlight” because that’s basically what we’re doing at this point. The heavy analytical stuff has all been done and we’re basically at the point where all we have to do is point out examples of things we’ve long established. 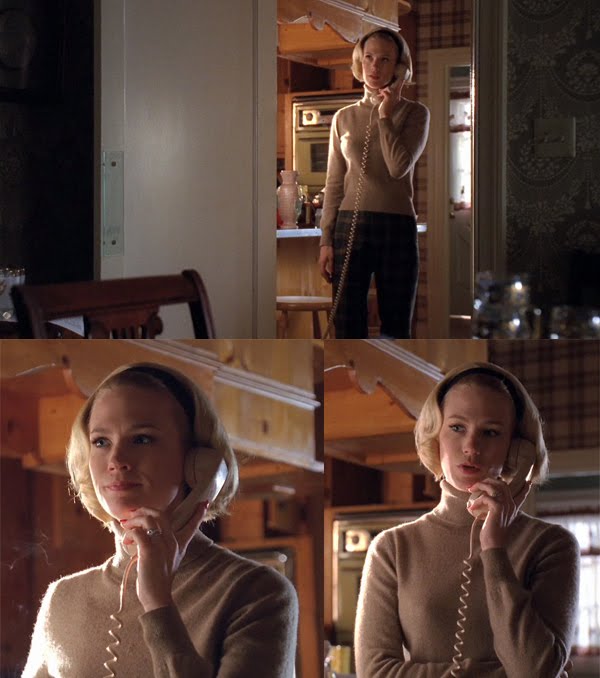 Yes, it was the ugliest thing we’ve ever seen Betty do, but is it wrong that we couldn’t take our eyes off that gorgeous little jacket through the whole scene? We’ve seen her in these types of relatively youthful outfits (a college student in 1965 could wear this) before. For this scene, like so many “bad Betty” scenes, it’s serving to highlight how childish she really is. So much so that an actual child can call her on her bullshit.

Look how Glenn and Betty recede into the similarly colored background, but Carla stands out like a sore thumb in her blue uniform. Ultimately, this standoff between Betty and Glen is going to affect Carla the most. 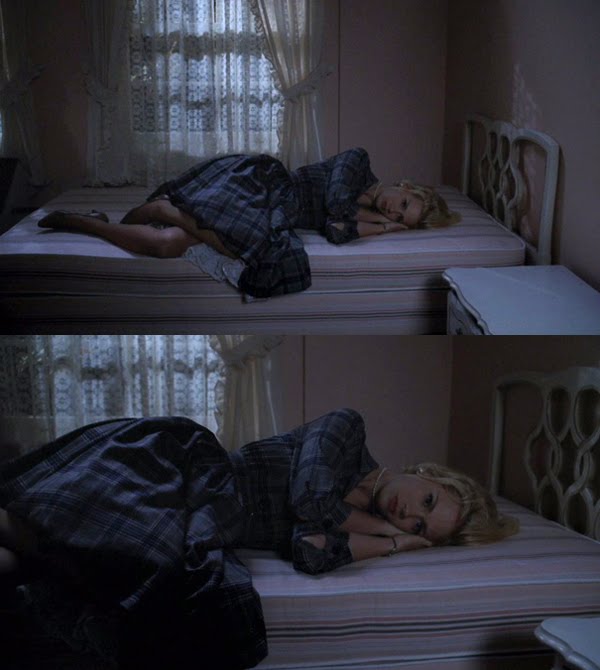 Oh, Janie Bryant. You are one masterful costume designer. We literally gasped out loud at this shot because it so clearly called back to this one, from setting to dress. At the time we noted how juvenile that dress looked on Sally compared to the rest of her costuming this season. Betty and Sally in their little plaid dresses, pouting because grownups are mean and don’t understand them.

We also gasped a little at this outfit because it so obviously calls back to the Betty who was married to Don, from the Grace Kelly hair to the pearls to the “sad marriage” coat, which she wore when Francine had her eye-opening (to Betty) mini-nervous breakdown and which she also wore to the stable in most of her flirting with Arthur scenes. Betty’s still in a somewhat sad marriage (“Things aren’t perfect”) and she’s toying with the idea that maybe she can get a do-over with Don, so she dressed up the way Don used to like. Little did she know that Don’s moved on from ’50s princesses to a ’60s princess with a totally different look. 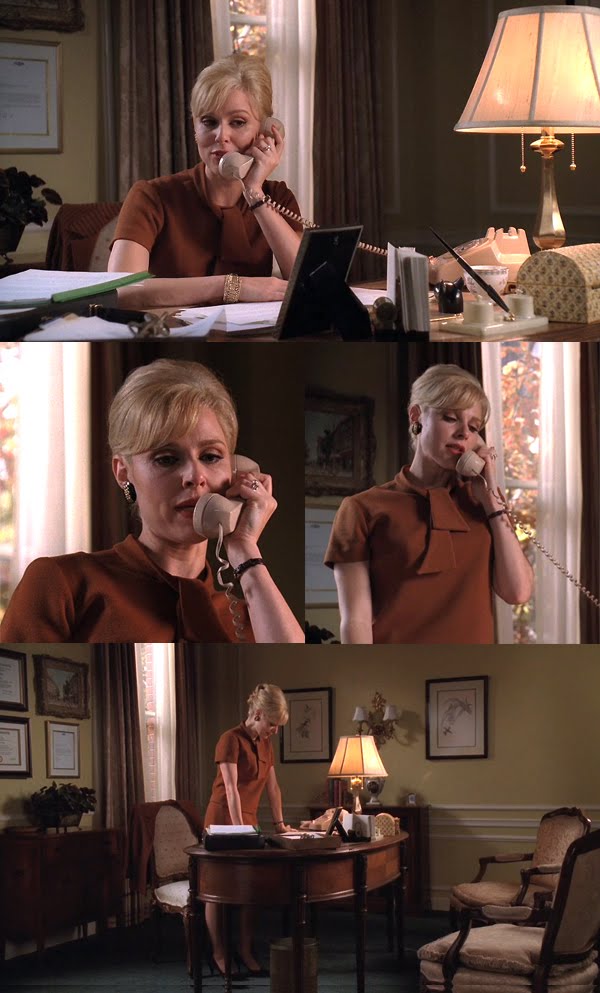 Faye’s got a fabulous little office, doesn’t she? We thought Cara Buono played this scene beautifully, going from concern, to nervousness, to rage, to heartbreak, and then back to rage. Nothing to add from an analytical standpoint, except that this is a style and color that’s a bit unsual for her, given what we’ve seen her wear before. The brown matches nicely with her office, tying her to her professional surrounding as she mourns the loss of yet another relationship.

Three different women of roughly the same age; three entirely different looks. Joyce is still working her “artsy lesbian” look, with her men’s style jacket, pants (which were shocking in a professional setting in 1965), and trademark turquoise necklace. Carolyn Jones’ get up initially struck us as a bit over the top, but she’s a model. It makes sense for her to dress this way. Peggy is wearing typical office-wear for Peggy. We’ve seen everything she’s wearing here before. It’s amazing how you can look at all three of these women in the scene and know so much about them just by their clothing. 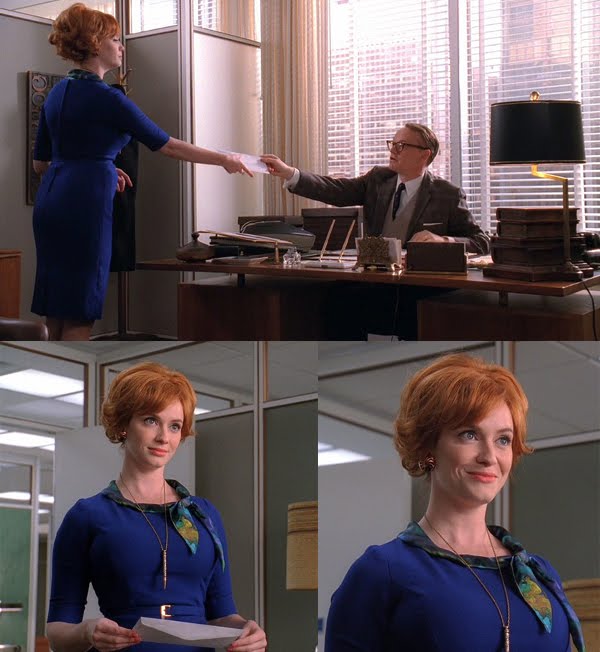 This royal blue calls back to a couple secretarial outfits she had back in the SC days. It’s fitting that she’d wear it now in a scene where she’s supposed to feel honored, but still feels like a secretary; less than a secretary, in fact. 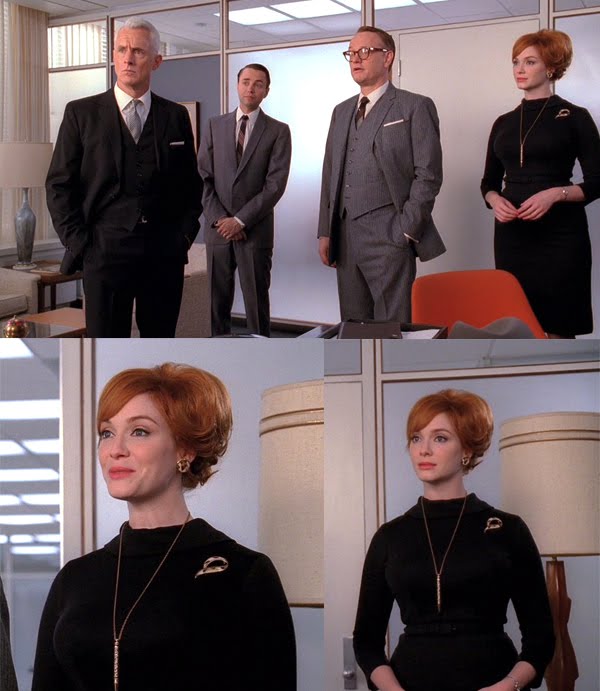 We love when Joan stands with the partners. It really drives home how far she’s come in her job, even if they don’t pay her what she’s worth. This black dress secures her position here because she fits right in with the greys and blacks of the men around her. Not much to say here except how cute Joanie always looks when she’s out of her office armor. Plus, this is the first scene where she actually looks a little pregnant. People said they could see a bump in the blue dress above, but we couldn’t. 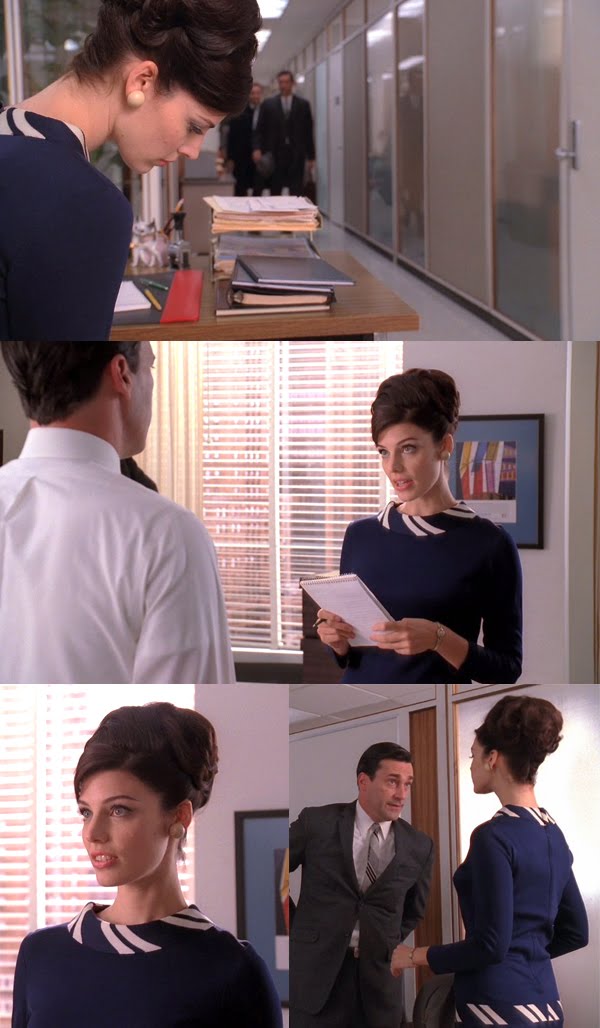 Fabulous. We’ve pointed out before that she favors outfits of all one color, like Joan. But she also favors graphic accents or trims. It makes her look much younger and more modern than Joan’s getups. 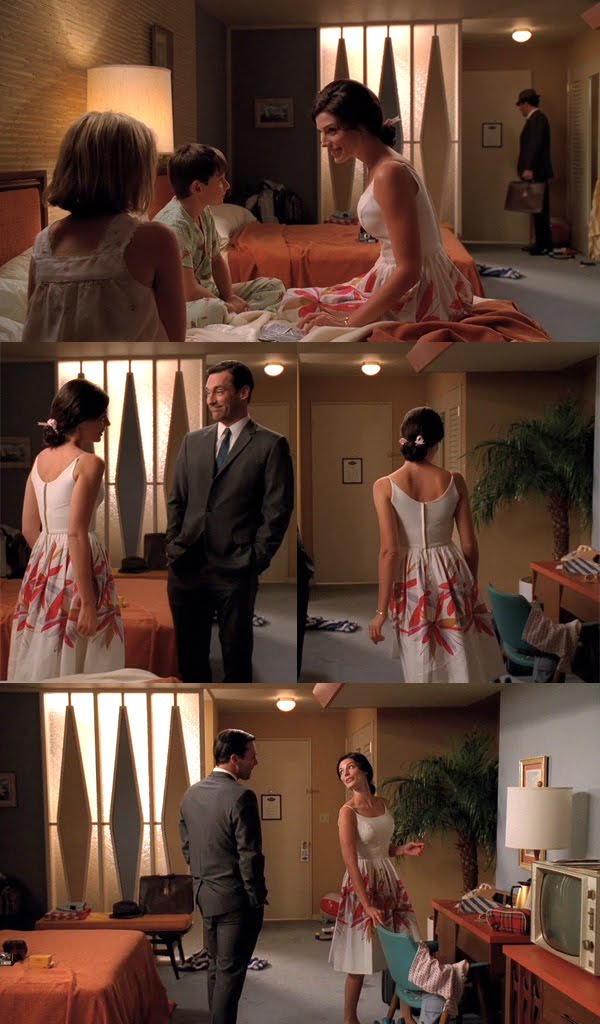 Well of COURSE she’d be in a dirndl silhouette in the scene where she sits on a bed and sings with children. Don didn’t even have to make the “Maria von Trapp” crack because the costume already did it for us. It is a super-cute little sundress, isn’t it? And her hair looks adorable. Clearly, we were all meant to fall in love with Megan along with Don.

And the set design and art direction on that hotel room is flawless.

We laughed out loud at the kids stripping down right at the pool. We forgot about that; wearing your bathing suit under your clothes on vacation when you were a kid. Bikinis had been around since the war, but it took until the ’60s for them to become something that isn’t shocking and risque in the minds of the masses. Megan would have received quite a bit of criticism just ten years before for wearing something like this while taking care of children. Remember how Don flipped out on Betty for buying one just a couple of years ago? 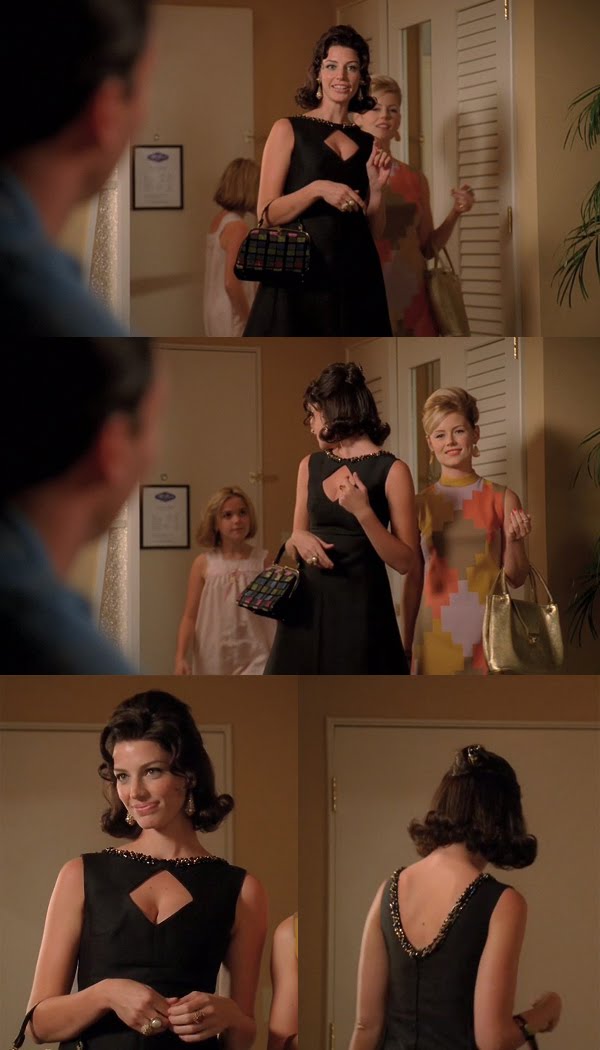 Freaking FABULOUS. At the first viewing (we’re up to 5 or 6 at this point) Lorenzo exclaimed “Oh my god, I love that DRESS!” and Tom said, “Which one?” They’re both fabulous and very mid-sixties mod. Perfect for a night at the Whisky a Go Go. For the record, Lorenzo was talking about the bitchy friend’s dress, although he agreed that Megan’s was also fabulous. Megan’s dress is pure New York sophistication and the bitchy friend’s is pure swingin’ California.

What we found a little alarming about this scene, at least from a visual sense, is just how much they look like a picture-perfect family straight out of an advertisement. This is why we think the engagement is a mistake. At one time, we’re sure Betty was bright-eyed and didn’t get upset over spilled milk either. It was the pressure of living up to that perfect image while being married to a mess like Don that drove Betty to become the hardened woman she is. We doubt Megan will ever be as childlike as Betty is (because that’s not something you can lay at Don’s feet), but we fear after a half-decade or so of marriage to Don, she’ll be a much different woman. Remember, Betty spoke Italian, traveled the world and was educated too. 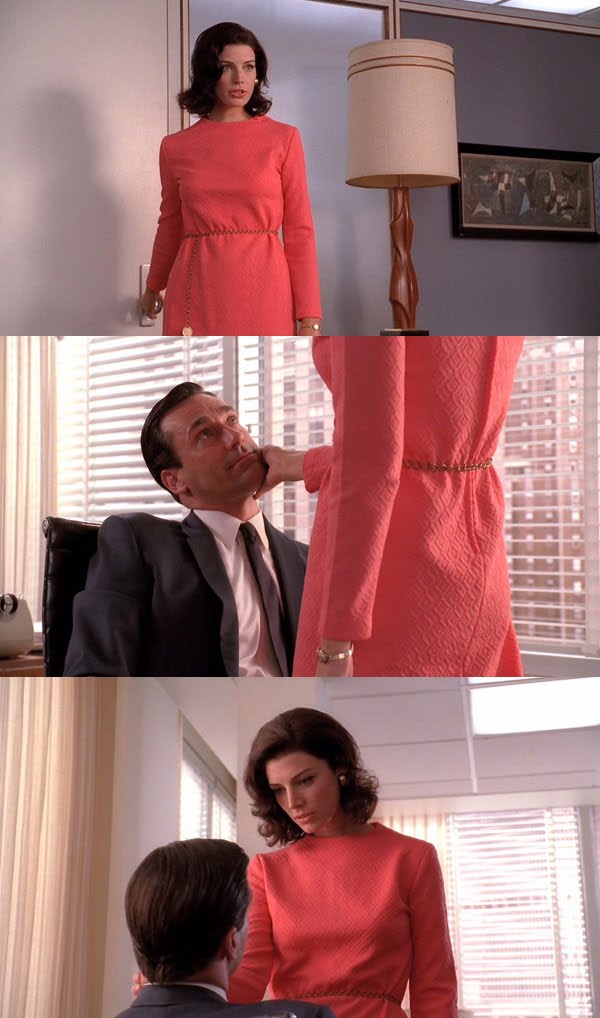 Tom’s grandmother had a suit in that exact fabric – and he forgot all about it until this scene. This is one of those looks that make us applaud Janie because it’s really not a classic look in any sense and it doesn’t look all that great sitting here in 2010. In 1965 it would have looked just fine.

We love how messy Megan’s hair was in these scenes. She spent the night at Don’s and was probably way too flustered that morning to care much about her hair helmet. 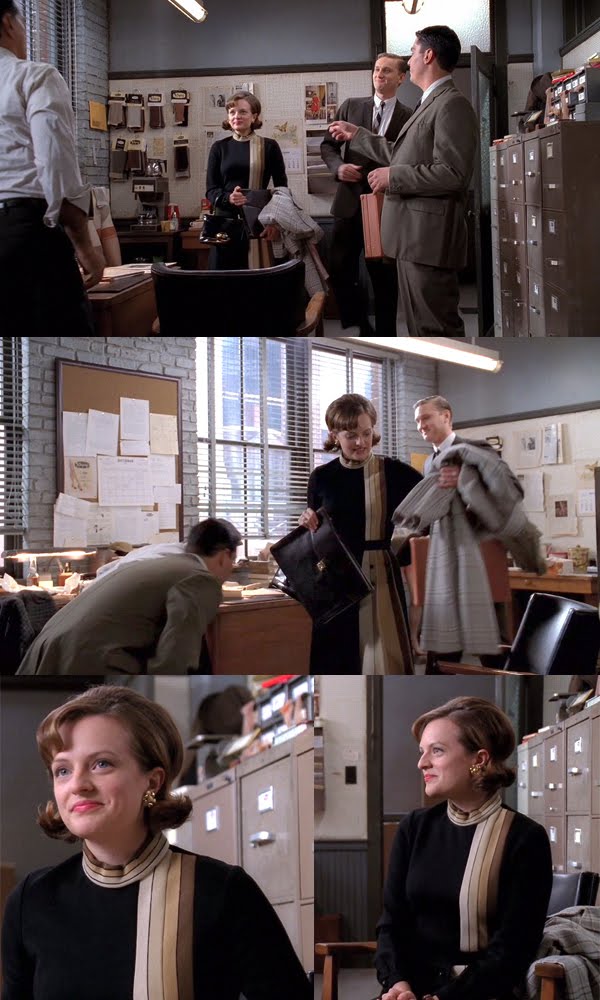 Love this dress. She wore it briefly once before the previous winter during the episode where they were courting Honda. It strikes us a somewhat heavy dress to be wearing in early October, especially with a coat. We’ve noted before that the women – specifically Joan and Peggy – introduced black into their wardrobes this season. That’s, again, a reference to the rather dark year everyone’s been through, but it also references Faye, who wears black a lot. In fact, it’s her signature color the way golden yellow is for Peggy or purple or red is for Joan.

There are places in the garment district that still look exactly like that set, 45 years later. Although, sadly, there are fewer and fewer of them. 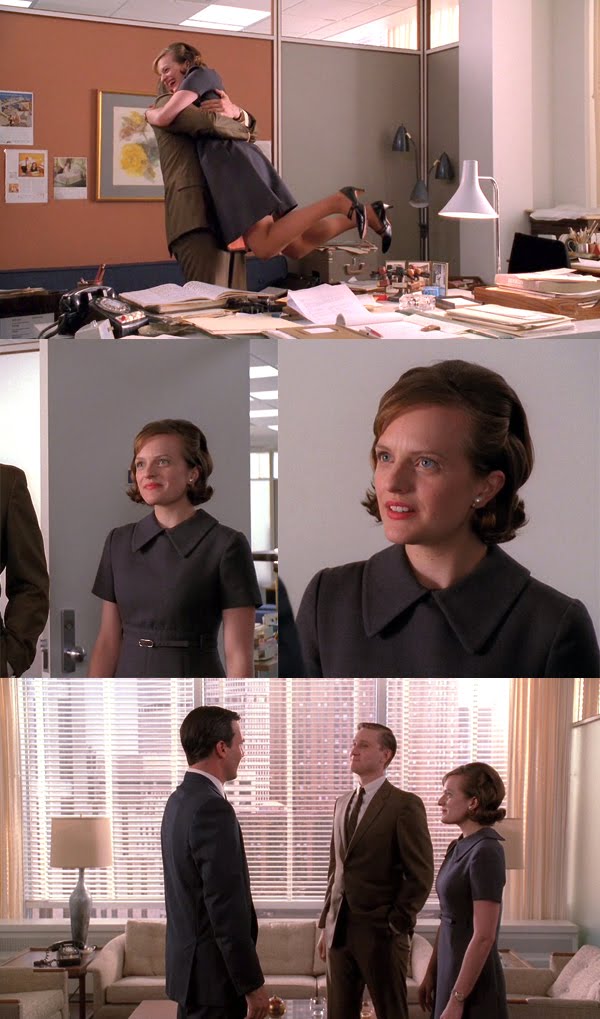 Love this dress. It’s cute and youthful but still very professional. One of Peggy’s signature elements is the peter pan collar, which has slowly morphed as time went on to the more masculine-looking pointed collars she now favors. She and Don match almost perfectly here because she is, as he well knows, the person closest to him. We loved that she could shut the office door and with one syllable (“Wow.”) express everything to him. We loved even more that he only needed one syllable to figure out what she was saying. He can marry whomever he likes, but no woman is ever going to understand him as well as Peggy does, not after Anna’s death.

… is the fact that, with this scene and dressed in black and grey, Joan and Peggy have the closest, realest moment they’ve ever had in six years. There was never a time where they dressed in similar shades. In all other scenes over the years, they were dressed to highlight their vast differences. With this scene they finally realize how much they have in common. 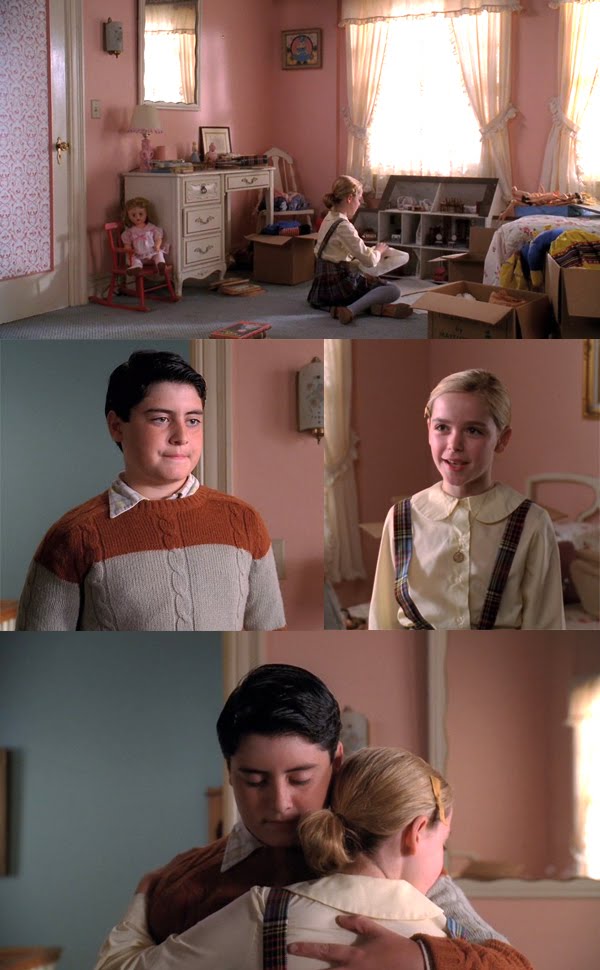 And finally, a shot of Sally’s bedroom because we know that this is going to get those “I had that!” responses. What a heartbreaking scene. If you’ve ever moved as a child, then you had these “I’ll write/I’ll visit” conversations with other kids that almost never seemed to go anywhere. Creepy Glen turned out to be not so creepy at all. In fact, he and Carla seemed to be the only two people in Ossining who genuinely cared about her and saw her for who she was.

Hey, we did pretty good. We thought we weren’t going to have much to say at this point but we should have known how easily we can run our mouths off. Remember: Mad Style isn’t over. We’ll be getting to the men going forward and we also have plans to look at the lingerie, the “bad girls,” and Sally Draper herself. Plus, Janie Bryant’s got a fabulous little style book coming out for which we got a preview and it looks fantastic. We’ve spoken to Janie a few times on twitter, so we’re gonna work on getting a chance to interview her and who knows? Maybe wrangle a couple books for giveaways. Stay tuned on that.

In other TV blogging news, we’ve decided that, yes, we’re gonna pick up on the remainder of the season of Boardwalk Empire on HBO. We’re a bit intimidated by it because it’s not a period of history we know as well as we do the Mad Men period and we don’t know the characters nearly as well as we do the Mad Men cast. We’ll have a post up some time before Sunday’s episode running down the characters and storylines and then we’ll have a new post up every Monday talking about the episode. Catch up now! They’re all On Demand, assuming you have HBO.