Sometimes, Glee is its own worst enemy. One of the things that makes the show so much fun, its wild unpredictability, is also one of the main reasons the show is so uneven. After last week’s fun, dramatic, and ultimately uplifting Gaga episode, the show came crashing back 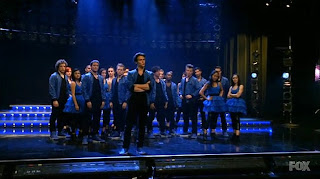 down to earth in a big clumsy way last night. And it pains us to admit this because we really want this show to succeed, but it’s been awhile – longer than we can remember – since the show made us laugh out loud as hard as it did during the first part of the season. In addition – and somewhat worse – we haven’t really felt the need to download any of the musical numbers for a long time. We were going to download “Bad Romance” last week but never got around to it. If Glee can’t make us download pop songs and laugh out loud, what is it for?

Now, granted, that’s us. Maybe the public thinks differently. But a quick read of the various recaps and reviews of last night’s show tells us that a lot of other people are thinking along the same lines. For us, that Whedon-directed episode of several weeks back still stands as a testament to what the show could be: dramatic, funny, heart-wrenching when it wants to be, and loaded with one great vocal performance after another. More importantly, the plot flowed and made sense, as did the character interactions. Joss Whedon showed us what the show could be and to be honest, every episode since then has seemed a little less enjoyable for not reaching those heights.

Anyway, we don’t want to be all doom and gloom here. It’s just that, about 45 minutes into the episode last night, we both realized that we hadn’t laughed once. Perhaps your mileage varied. Various TV critics have complained that the show, among its fans at least, remains completely impervious to criticism. People just love their Glee, no matter how good or bad the episode and for awhile there, we were one of them. But when we take the long view, 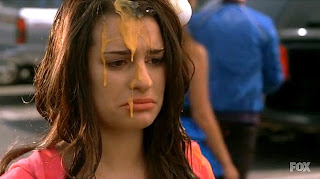 we can’t imagine that a show this uneven will last much past a second season and we really hope they right the ship before then.

So, yes. We did not love last night’s episode. Let’s break it down. Jesse, having fulfilled his role as plot device, does a complete (and completely predictable) about-face and dumps both Rachel and New Directions. Vocal Adrenaline has declared war on New Directions and focused their sights on the star singer, pelting her with eggs and TP-ing the choir room at McKinley High. We suppose their abbreviated (why were so many numbers so short last night?) version of “Another One Bites the Dust” was supposed to intimidate New Directions, but it wasn’t nearly as impressive as their version of “Rehab” last year.

Anyway, Puck and Finn, who apparently forgot that they’re supposed to hate each other, or at the very least, not get along with each other, team up to slash the tires on the 26 Range Rovers gifted to the members of V.A. Shelby Corcoran shows up in Principal Figgins’ office, 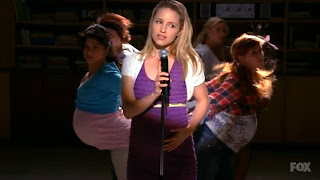 where everyone pretends that they don’t know she recently reached out to Rachel because she’s her daughter, and demands retribution. Finn and Puck (well, mostly Finn, really) promise to pay it off and get jobs. Enter Terri and Sheets n’ Things. We thought they’d forgotten about Terri. They certainly seemed to have forgotten about Emma. We realize this is a big cast and a bit of a juggling act for the creators, but still. Anyway, Jessalyn Gilsig can make us laugh just by raising her eyebrow and saying “Oh,” so we were happy to see the return of her and her hilariously named work place. Having the whole store sing Beck’s “Loser” was a great idea. We were happy to hear a song that was less than 20 years old being sung by these supposed teenagers. 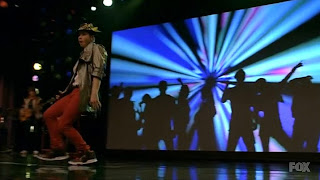 Realism isn’t particularly important to Glee, but things do have to make a certain kind of internal sense for us to buy them and the whole seduction subplot was simply unbelievable on any level. Although we did love the sight of Sue in a track suit and pearls. And we also have to pay props to Jane Lynch, because even though we didn’t buy it, her facial expressions during Will’s number were absolutely hilarious.

Speaking of Will’s number…as soon as the overly-repeated theme of the episode was revealed (how many times did we hear the word “funk” last night?) we knew we were going to get another soulful white boy number out of Will and we have to say, he did a damn good job on “Tell Me Something Good” but even Matthew Morrison’s flexing butt cheeks weren’t going to make us forget Chaka Khan.

And another thing: how can you have an episode centered around “funk” and not utilize Mercedes better? Granted, “Good Vibrations” was a lot of fun but she was essentially singing backup on it. Then again, having Quinn, the whitest girl in the world, sing James Brown’s 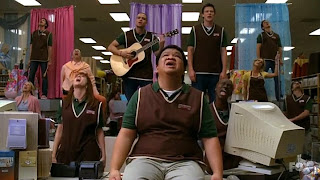 “It’s a Man’s Man’s Man’s World” was a clever idea even if the staging (all those pregnant teenagers inexplicably dressed in trailer park couture) was really, really weird. Mercedes was a little offended by Quinn’s comparison of her pregnancy to African-Americans experiencing racism (as well she should be) but we are just loving these two characters coming together as friends. It shouldn’t work on any logical level, yet somehow we buy it.

Enough bitching. They ended the show with a great rendition of “We Want the Funk” and next week’s finale looks to be pretty good, so hopefully the season will end well and they can spend the summer getting their shit together.

“Thinking ‘trust me’ was a sensible birth control option.”

“Their school statue is a bronze of a great white shark eating a seal pup.”

“I’m so depressed I wore the same outfit twice this week.”

“Where’s my music? How am I supposed to shop without my Kenny G?”

“You’re not gonna fondle us, are you Mr. Ryerson?”

“Did they change the name of this place to Losers n’ Things?”

“I thought Jews were supposed to be smart.”

“Something strange happened yesterday. I felt something below the neck.”

“Even your breath stinks of mediocrity”