Part of the reason we wanted to get at least one Joan post under our belts was because one simply cannot discuss Jane Siegel Sterling (played by Peyton List) without having some base understanding of Joan’s wardrobe. Jane was designed to be the Joan of her generation and her outfits – at least early on, while she worked in the office – were very much in the Joan mode with small, but telling differences. Later, when she went after what Joan wouldn’t (marriage to Roger Sterling), her outfits change completely and she looks nothing like Joan anymore; a change that works both on a character level and on a plot level, since there would, of course be major differences between the wardrobe of a young secretary and the wardrobe of a young trophy wife.
Season 2 Episode 5 – “The New Girl” 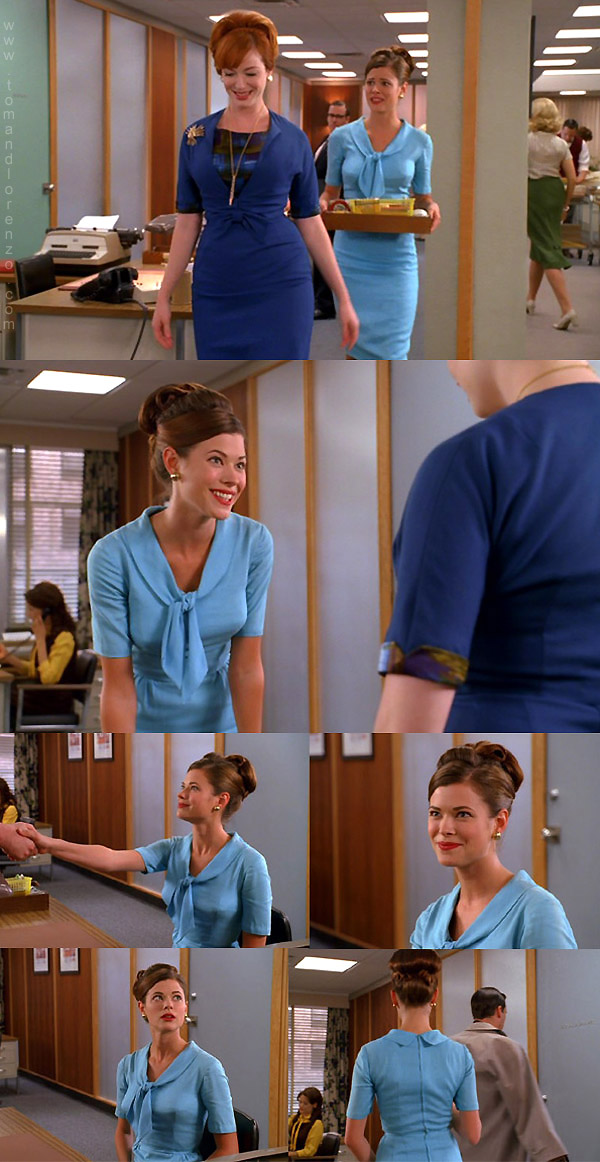 Joan, brand new engagement ring in tow, gives Jane the first-day-on-the-job office tour. Both are a bit giddy with excitement, for different reasons. Joan is far friendlier with Jane on her first day than she was with Peggy, whom she never quite understood.

You couldn’t ask for a better illustration of the idea that Jane is essentially Joan 2.0. She doesn’t have the ’50s Marilyn-esque body of Joan but that only speaks to her youth and the differences between the ’50s and the ’60s. Joan’s voluptuousness is about to go out of style, to be replaced by the mini-skirted skinny look that characterized mid to late ’60s fashion. Aside from the differences in body type, Jane is a total Joan clone. Joan is in a darker, more mature blue and Jane is in a more youthful shade of blue. Jane’s dress (the size notwithstanding) could have come right out of Joan’s closet: little sleeves, a scarf-like detail around the neck, all one color, form-fitting. Notably, she doesn’t wear brooches like Joan does, another element that speaks to her youth.

In another move that illustrates both their sameness as well as their age-inspired differences, Jane tries to make a play straight out of the Joan handbook, but completely lacking in the Joan subtlety. Joan confronts her sternly, orders her to button up her blouse and advises her that there are better ways to go about getting the attention of men in the office.Since the Joan/Jane relationship is now getting a little rocky (and about to get rockier) we start seeing slight differences in the clothes. She’s still got the Joan bouffant and the Joan silhouette, as well as the little sleeves, but the colors are much different – we have never seen Joan in white and probably never will – and the skirt is a little shorter. Again, it’s all about highlighting their similarities while pointing out their age-based differences. 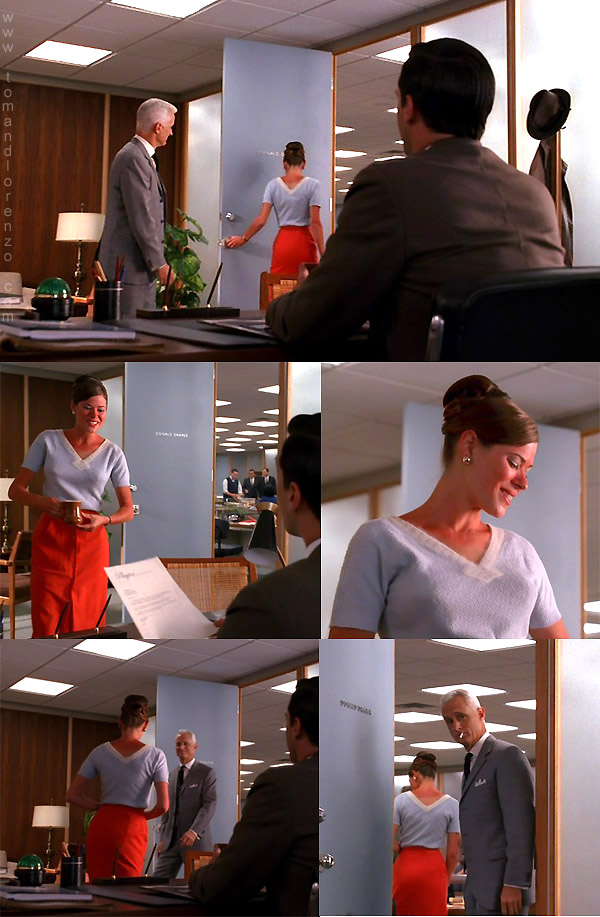 A short scene that depicts the first time Roger ever paid attention to her. “Has your wife seen that yet?” She has burnt herself to a crisp over the holiday weekend, an era-appropriate detail that we just love. You simply do not see people with sunburns like this any more.

The outfit is cute and, again, a little Joan-like but with enough differences to set them apart. The colors (which are really there to make the lobster-red of her skin pop) aren’t particularly Joan-like. She would never wear such contrasting pieces.

Jane has another short encounter with Roger and then teases and cajoles the boys into sneaking into Bert Cooper’s office (A MAJOR no-no), which turns them all on. She blithely dismisses Ken’s attempts to woo her.

Again, she’s a younger Joan with differences. The silhouette is there, as is the hair, but the colors are way off. Younger and more innocent-looking. Plus, Joan never wears little sweaters. 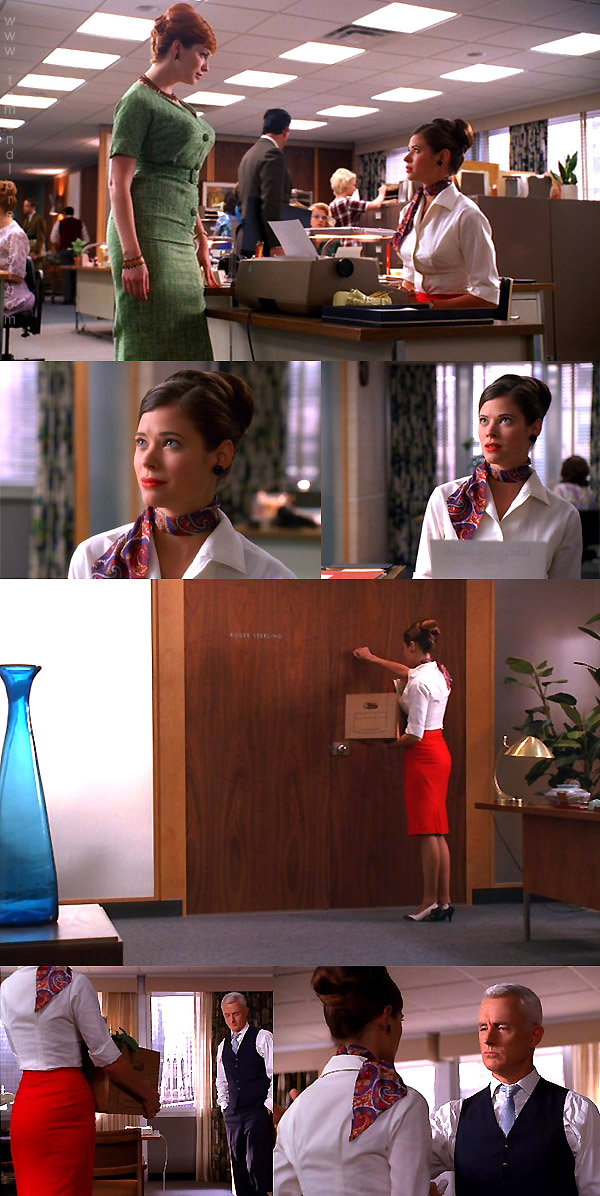 Joan gets wind of the after-hours visit to Cooper’s office and reprimands Jane for it. Jane, stupidly, mouths off to her and makes reference to her age. Joan, the steam practically shooting out of her ears, fires her on the spot. Jane may be clumsy and occasionally stupid in her attempts to make a splash at the office, but she’s not that stupid. She stops in Roger’s office on the way out and turns on the tears for him. He advises her to ignore Joan and report back to work as if nothing happened.

The divide between Joan and Jane has never been greater and their clothes have never been more different. Once again, there are signature Joan touches here like the scarf and the silhouette, but it’s much brighter and higher contrast (right down to the two-tone shoes) than anything Joan would wear, plus that busy print on the scarf is a hint of what’s to come later in the ’60s, fashion-wise.

Jane defies Joan per Roger’s suggestion, and shows up for work the next day as if nothing had happened. Joan confronts her (in the same purple dress she wore when we found out she was having an affair with Roger) and is, for once, stymied. She can’t overturn something Roger decided upon and she’s both frustrated and a little hurt by it.

It’s a cute dress. A little sleeker and sexier than her normal office attire, which may have been intentional now that she’s got her sights set on Roger Sterling.

Marilyn dies and the gals in the office bond over their tears. Later, Jane informs Don (who has been kicked out of the house by Betty) that she knows about what’s going on in his personal life. He lets her know in no uncertain terms that she is to keep her mouth shut about him. Shaken, she agrees.

LOVE this dress. It’s graphic and chic and a little sexy, but still appropriate for the office. She is clearly no longer a Joan clone, because Joan would never wear something like this. It’s too young and a little too flimsy for Joan, who likes the armored look.

In fact, “Jane is trying way too hard to impress” is everything you need to know about this character and her wardrobe going forward. The clothes are stylish as hell and tasteful, but there’s something a little off. She doesn’t look comfortable in them and she looks like a little girl trying on a grown woman’s clothes. Everything (especially the gorgeous bubble hat) looks a little too big on her. This is when lines start getting dropped hinting at an eating disorder on Jane’s part. Additionally, we’re starting to see some Jane trademarks as she tries to become her own woman: graphic qualities, boat or scoop necklines, tiny little cap sleeves or no sleeves at all, lots of white. These are all elements that set her apart from Joan and even apart from some of the other women, like Peggy (whom she’s closest in age to) or Trudy. 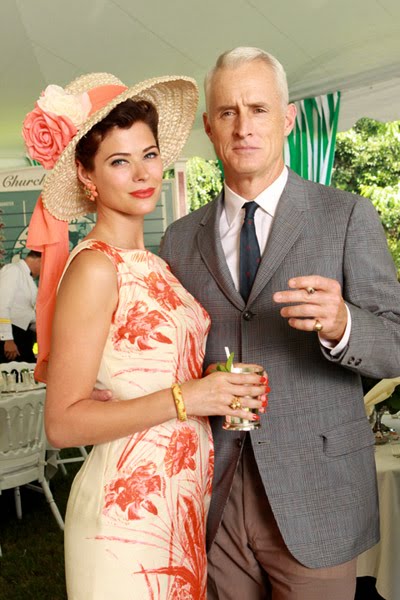 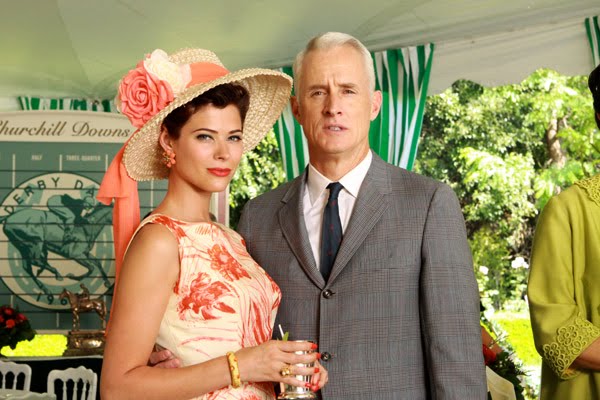 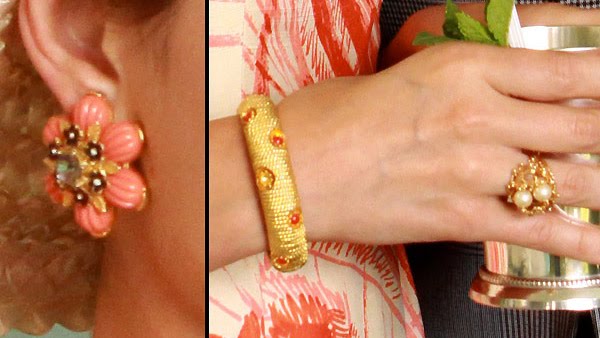 The Sterlings host a Derby Day party and both of them make total asses out of themselves, he by donning blackface, and she by getting visibly drunk.

Not much to analyze here. It’s a gorgeous dress in the Jane style (sleeveless, graphic, scoop neckline, lots of white/cream, big hat). 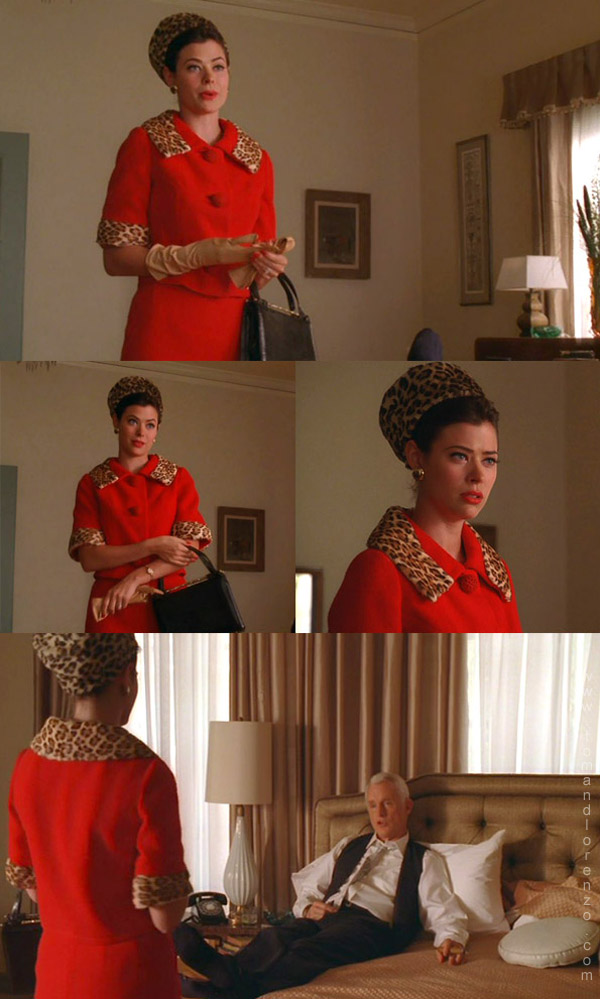 Roger confronts Jane and tells her to lay off his daughter, who resents her trying to make herself part of the wedding plans. She has a meltdown and locks herself in the bathroom.

Here’s Jane trying WAY too hard. This outfit is stylish, but a little too loud and it just doesn’t look like something Jane would want to wear. It comes off like something she feels she HAS to wear because of her new social position. It also comes off like she’s trying to look mature in comparison to her new stepdaughter who’s only a year or two younger than her. 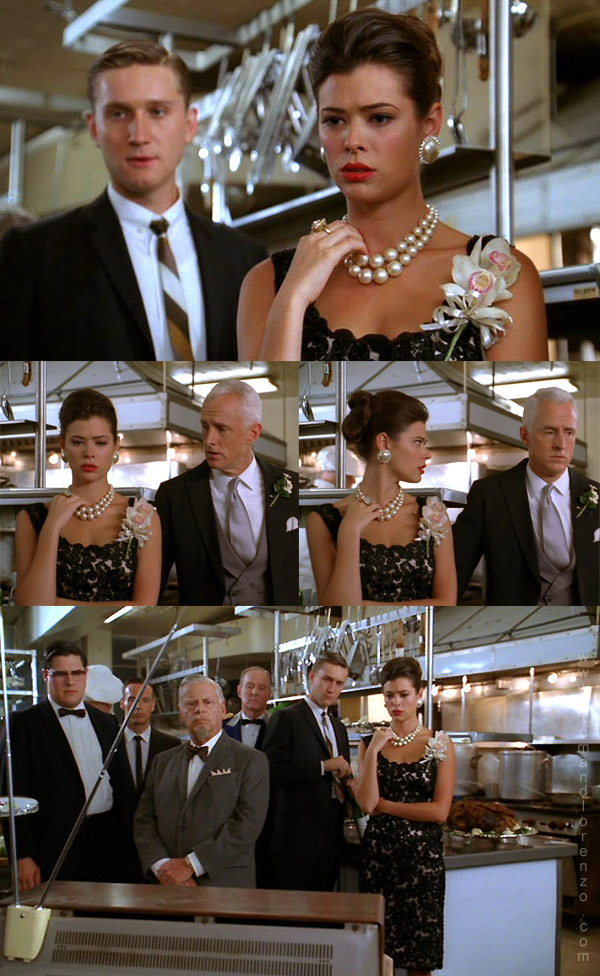 Jane at Margaret’s wedding, watching the post-Kennedy assassination news in the kitchen, much to Roger’s dismay.

Even if she’s trying too hard, we have to say she nailed it on this one. An absolutely gorgeous outfit, right up there with the best of Betty’s and Trudy’s clothes. Still, as beautiful as the dress is, it’s still got a little of that Jane clumsiness: the jewelry is big and obvious. Not even Mona would have worn jewelry that noticeable. The oversized jewelry makes her once again look like a little girl trying on grownup clothes.