Betty Draper. How does one sum up this character when she is such a lightning rod for conflicting opinions? Victim of the pre-feminist times or bad mother? Spoiled little rich girl or long-suffering wife? The fact of the matter is, she’s pretty much all of these things. The beauty of Mad Men is it doesn’t attempt to reduce people down to easily understood character traits. A Main Line princess and former model who is so used to the comparison she actually gets bored when people frequently comment on her resemblance to Grace Kelly, she married Don thinking he was one thing and thinking she was going to have a certain kind of life only to find out he wasn’t what she thought and neither was that life she thought she wanted.

Like Joan, Betty’s costumes have an instantly iconic quality to them because they do such a good job of illustrating who she is at a glance. It also helps that, like Joan, she’s beautiful and more importantly, beautiful in a way that embodies the time period. There are plenty of beautiful and stylish women in the world of Mad Men, but there’s a reason both Joan and Betty are being made into Barbie dolls. It’s because they don’t just look like women of the period, they look like movie stars of the period. 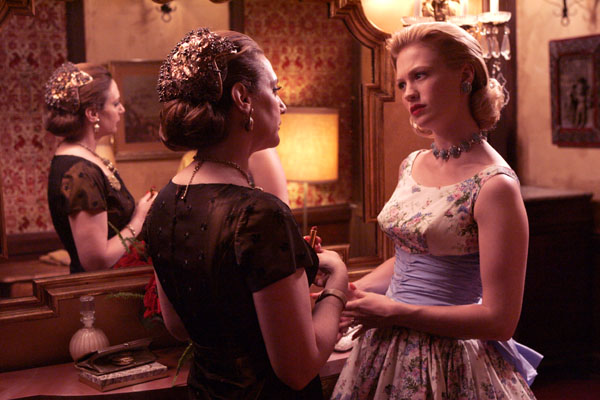 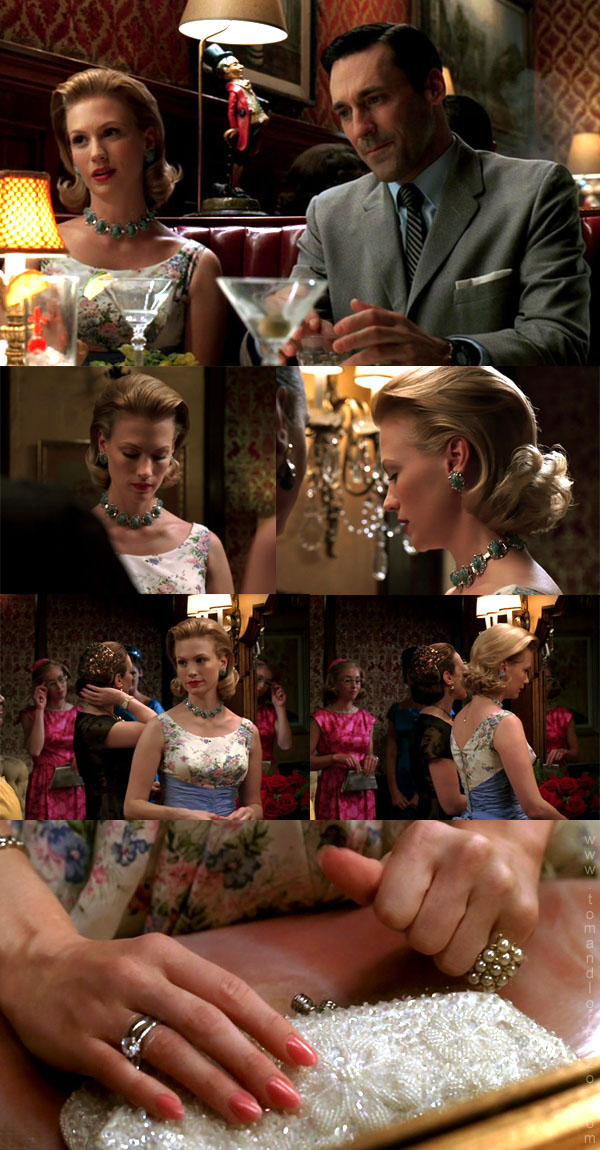 Dinner in the city with the Drapers and the Sterlings. We’ve already examined this scene from the Mona side. As we noted back then, both of them are wearing costumes that speak to their age and to the fact that they’re still living in the ’50s. Mona’s getup ages her a bit and if anything, Betty’s makes her look younger than she is. Mona is all dark and Betty is all light and floral and delicate. In fact, a lot of Betty’s S1 costumes deliberately set off her doll-like demeanor as well as her youth. Unsurprisingly, this gorgeous confection of a dress is what they chose to recreate when it came time to make a Betty Draper Barbie.

Betty later remarks that this is the first time she’s been let in to this part of Don’s life, the professional part. We’ll see that she very quickly learns to alter her look to become less of a doll and more of a trophy wife. 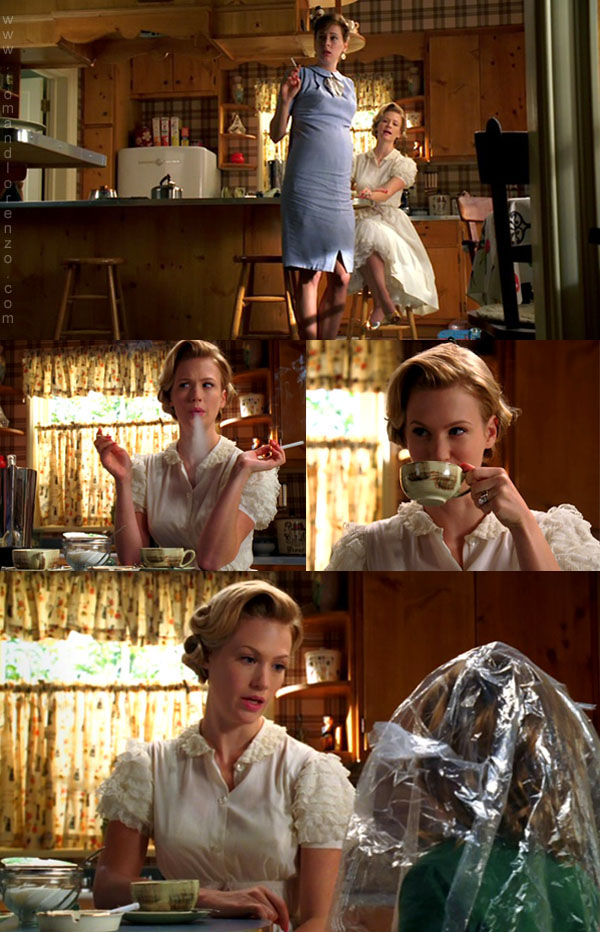 Betty and Francine – have we mentioned we adore Francine? – do a little housewife bonding over coffee and cigarettes while their children risk asphyxiation.

The only real purpose for this look is the same as the purpose for this scene: to establish how far away Betty lives (figuratively and literally) from Don’s city life. If there’s no one around to impress (like Don or his boss) then there’s no need to get dressed. When Betty’s in housewife drag, she tends to look her age more as opposed to when she’s dressed up and looks like a doll. Still, it’s notable that even though this housedress is meant to firmly place her back on earth after the relative glamour of dinner in the city, it’s still something of a confection, all white and ruffly. We’ll see Betty in white a lot. She’s certainly not pure of heart, nor is she a virgin; the white signifies her naivete and childlike approach to life. It also constantly reaffirms her wife status as it constantly reminds us of a wedding gown. It also tends to look damn good on her. 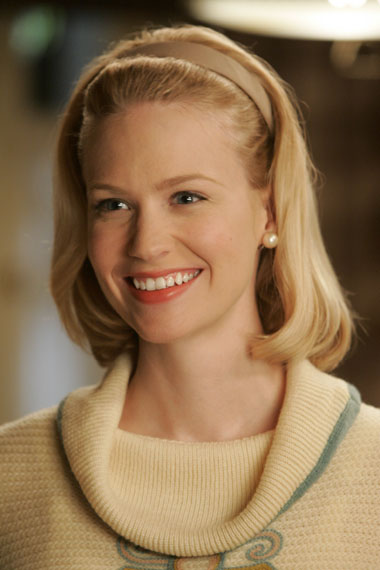 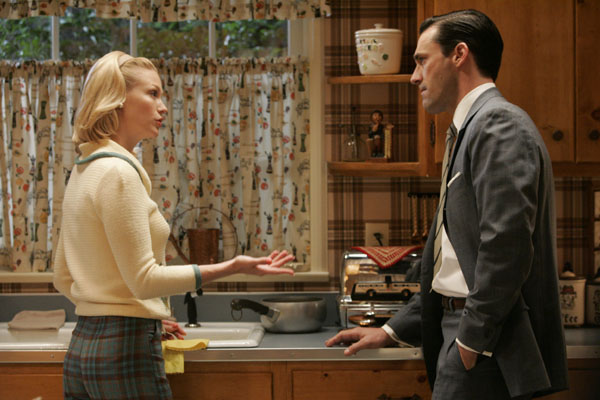 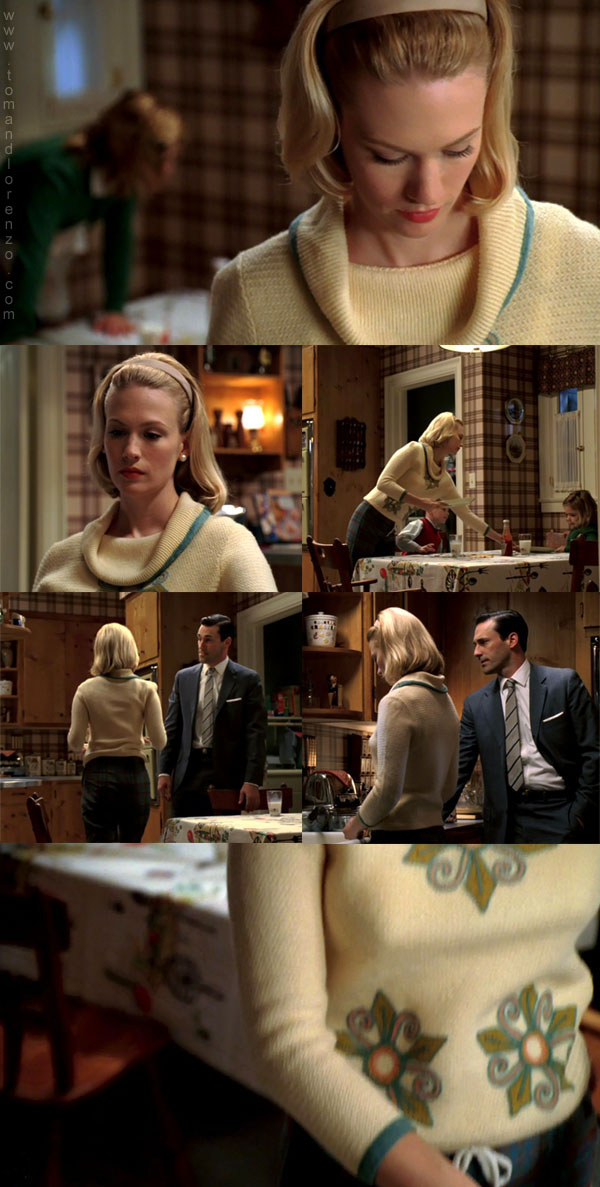 Betty crashes the car because of her hand tremors and Don reluctantly agrees to send her to a therapist, making her well aware that he thinks the very idea is ridiculous.

This is a cute little dinnertime outfit. She’d never (unless she was sick, very pregnant, or mad at him) allow Don to come home to the sight of her in a housedress or bathrobe. The headband and the tight little plaid pants again serve to make her look juvenile relative to Don’s grownup suit and dark colors. 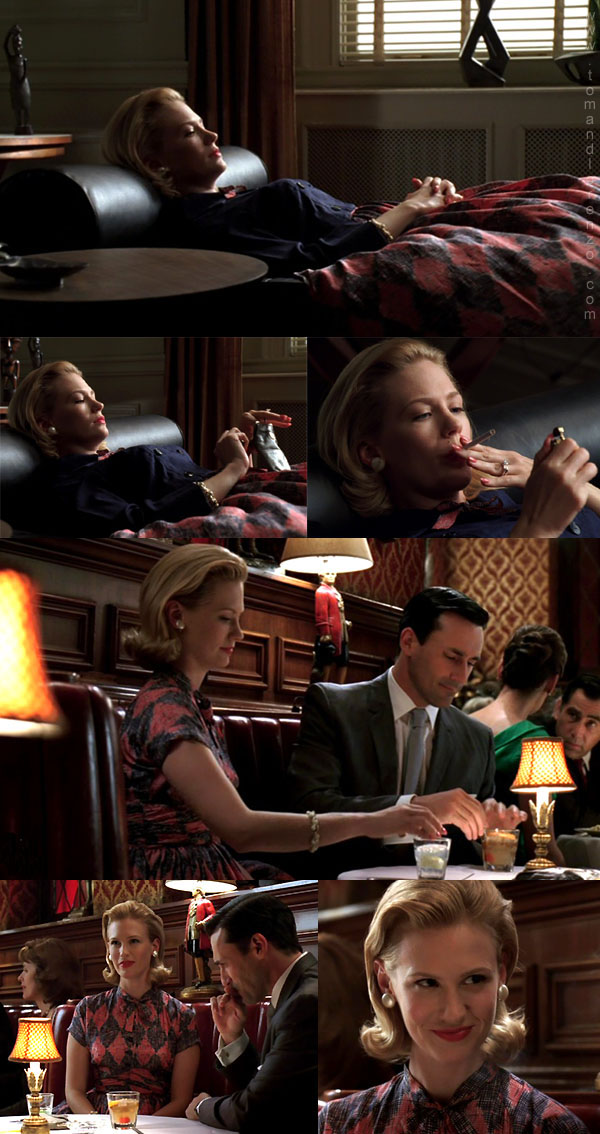 Betty’s first therapy appointment, followed by dinner in the city with Don.

And just like that, we’re back to doll clothes. After all, she was just as intent to impress her therapist (it was all over the scene) as she was to look impressive enough to hang on Don’s arm in the city.

Again, we’re looking at a style that’s right on the verge of going out of style. To Betty, this is what you wear when you’re in the city because this is what she wore when she used to be in the city a lot more. 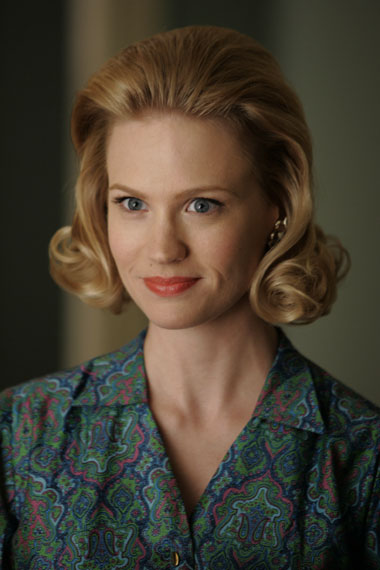 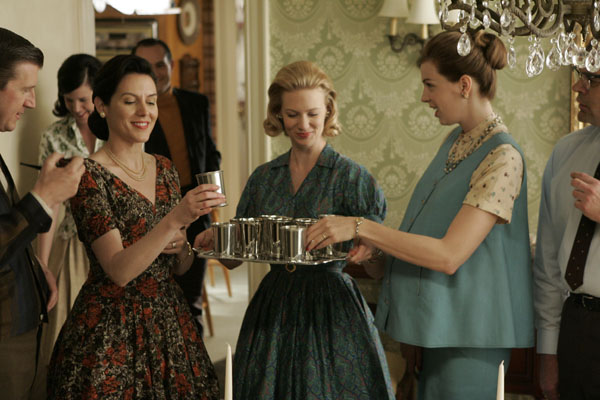 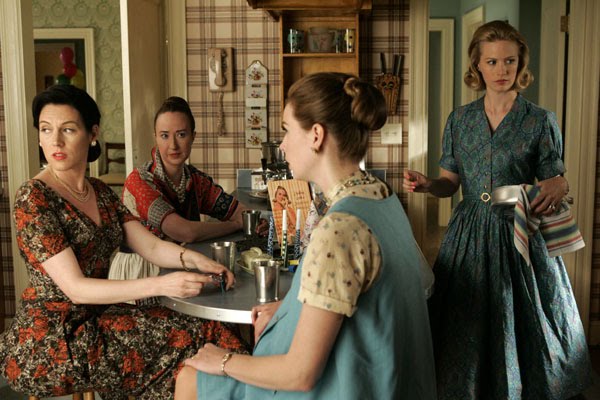 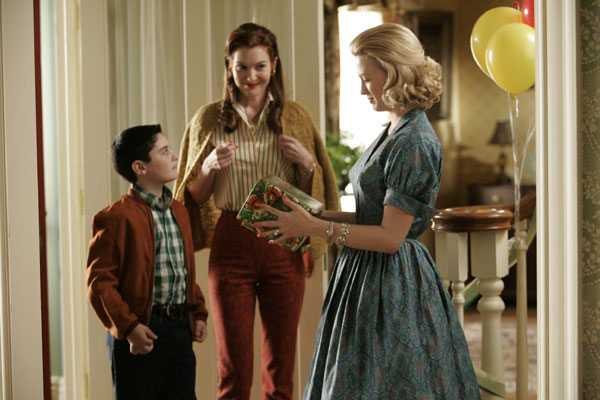 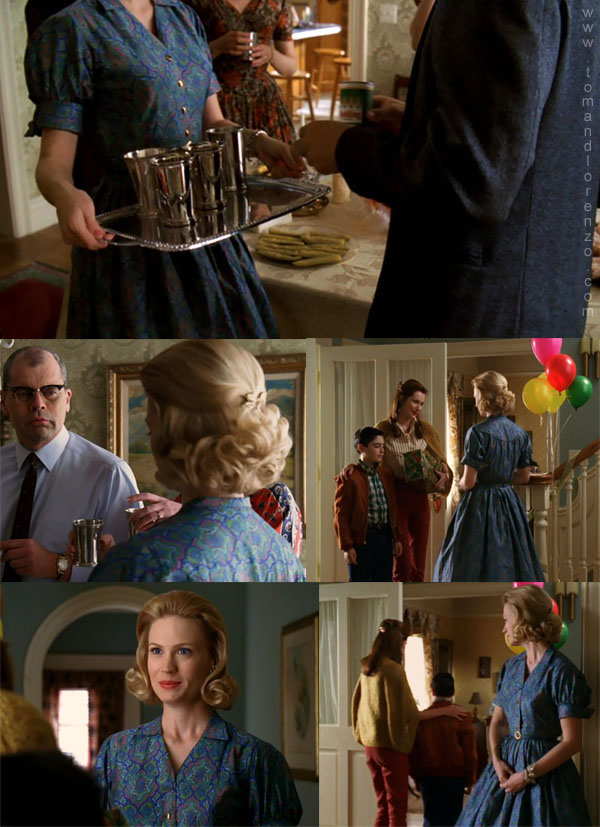 Sally Draper’s birthday party and all the neighborhood gals are discussing Helen Bishop, the tragic divorcee. It’s made perfectly clear that all of these women judge Helen so harshly because the very idea of a woman getting out of an unhappy marriage is deeply threatening to them. Anyway, Helen shows up and she is notably not wearing the correct uniform. Look at how she’s not only a completely different silhouette from Betty, she’s also coming from the opposite side of the color wheel. Betty is in cool blues and greens and Helen is in slightly harsh yellows and reds. All of the women are in floral dresses; Helen’s in a striped blouse.

We talked about shirtwaist dresses before, when we were looking at Trudy’s wardrobe. We noted then that Trudy’s were a little more modern than Betty’s, which tend to look at least a couple of years old. This isn’t the wild paisleys of the later ’60s; this is the staid, acceptable low-key paisley of the late ’50s. 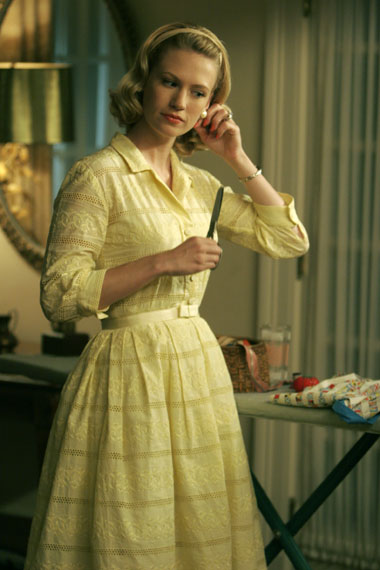 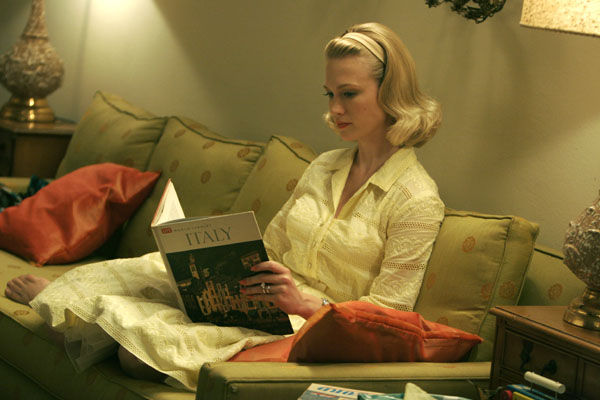 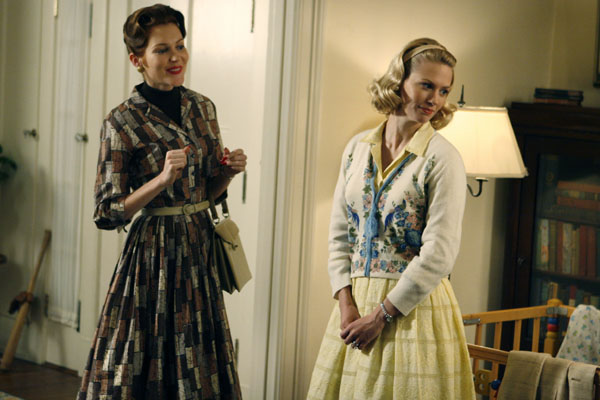 Helen asks Betty to babysit her kids so she can go out and stuff envelopes for the Kennedy campaign. Glenn, Helen’s son, has a crush on Betty and asks her for a lock of her hair. Betty, whose entire psyche is constructed around the attention she gets from men, gives him one.

Another shirtwaist dress, this time in a pale and simple yellow, playing off her own coloring. It stands in stark contrast to Helen’s own outfit, which is dark and discordant. Betty is the picture-perfect mother figure, in Glenn’s eyes at least. 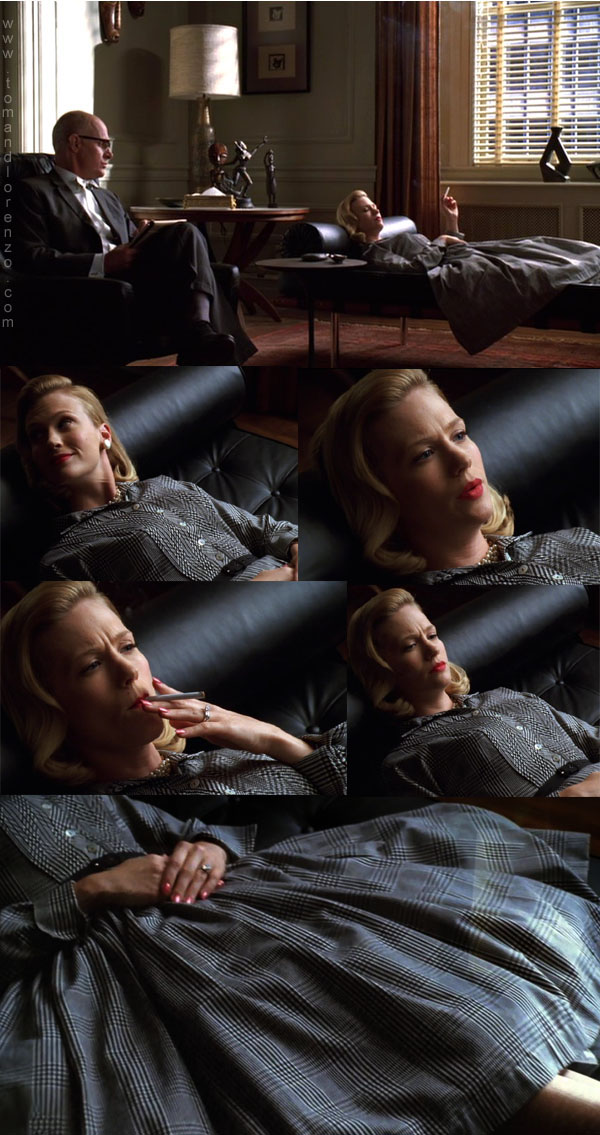 Betty obsesses over Helen Bishop to her therapist.

It’s notable only in that a) it’s gorgeous and b) it’s even more of a ’50s look, with its dark plaid, nipped waist and huge skirt. Betty simply can’t comprehend the world of 1960, where women can just leave their husbands and move in down the street without shame, because she doesn’t live in that world. Not yet. 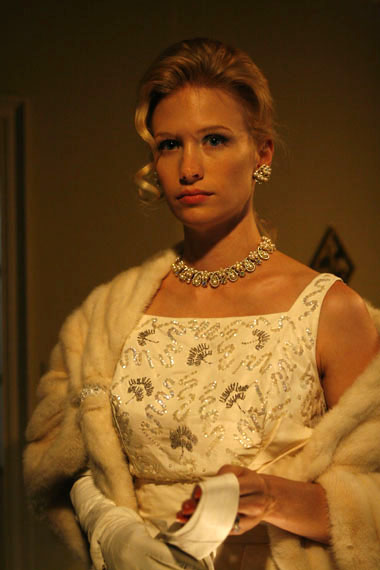 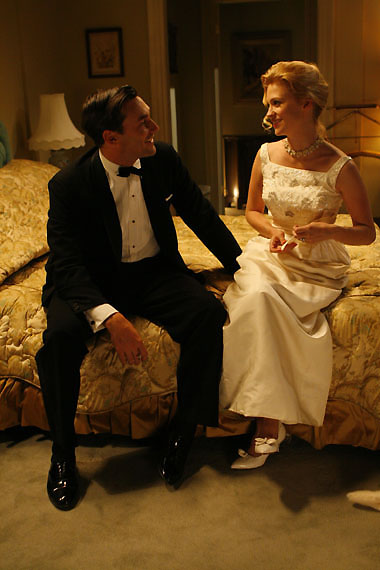 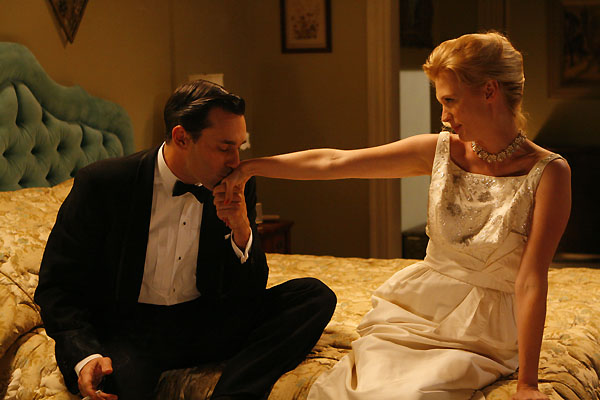 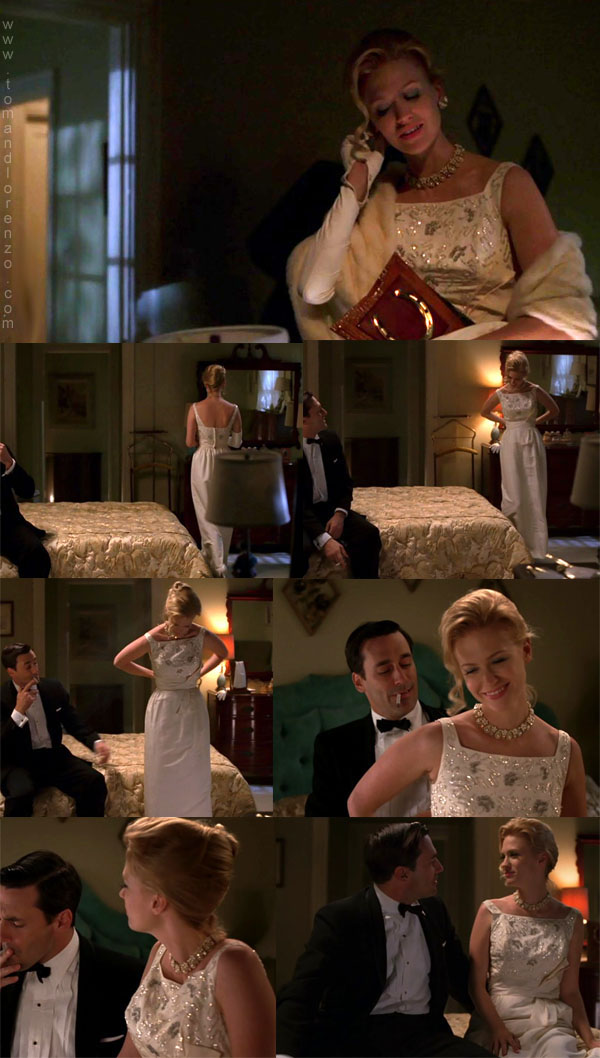 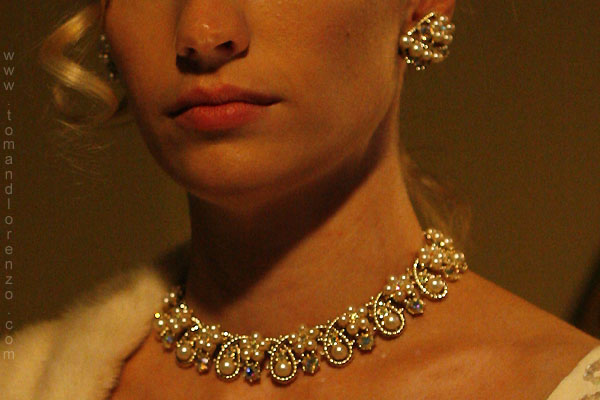 Betty and Don come in drunk from an awards dinner, award in tow. It’s a cute scene and it’s one of the ones we tend to think of when we try to think of scenes where these two characters appeared happy and in love. There aren’t many of them.

Bam. Suddenly it’s 1960 in Betty’s closet. You just know this is a brand new outfit, bought special for the occasion. She certainly doesn’t look like a doll here. In fact, as Betty’s formal looks transition away from the childlike clothes, she goes from looking like a doll to looking like a movie star, which would have been a deliberate choice, knowing Betty.

Betty comes into the city and sweeps into the offices of Sterling Draper because she has a family portrait scheduled. Don has disappeared to go have lunch with his long-lost brother and Peggy (who is meeting Betty for the first time) is a nervous wreck because she thinks Don is out with Midge. Got all that?

This is the outfit she wore to her first therapist appointment. Betty’s not so well off that she doesn’t repeat outfits. Clearly, this is her go-to “day in the city” outfit. The exuberance of the skirt and the overall doll-like quality (Peggy nervously proclaims “You’re so pretty in that light!”) set her far apart from Peggy’s no-nonsense business attire. 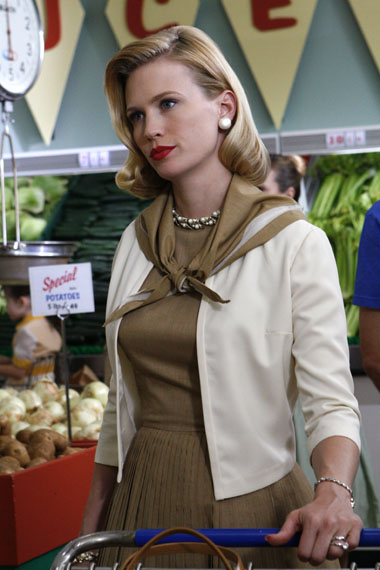 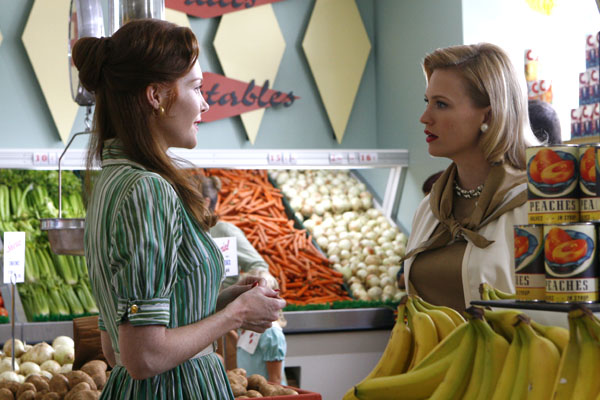 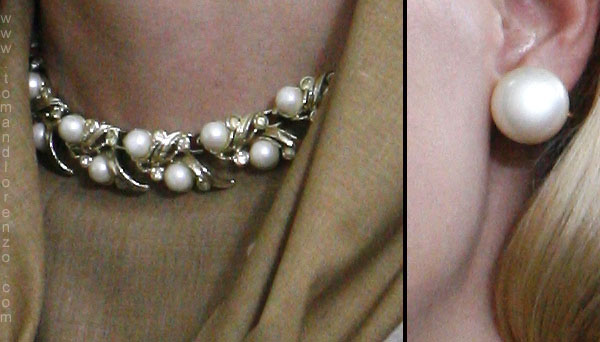 Helen confronts Betty in the supermarket about giving Glen a lock of her hair. Before she can admonish her, Betty slaps her and storms out. Housewife drama!

Okay, before we even examine the outfits, can we all just pause and lovingly gaze at that astonishingly accurate set? We want to live there.

Anyway, Betty is at the height of her hausfrau angst here and we think it’s notable that she is dressed to the nines to go grocery shopping. We realize that this was a time when women often dressed up to go anywhere, but even by the standards of the time – and in comparison to the other women in the scene – Betty is seriously dolled up. She can’t seem to find any happiness in her life, so she’s doing the only thing she knows how to do anymore, relying on her looks to get her through the day. If Betty Draper has to go to the supermarket, then by god, Betty Draper is going to be the most beautiful woman to ever handle fruit. It’s not that she’s overdressed, but she clearly spent quite a bit of time on her look before heading out the door. There’s nothing wrong with the way Helen looks here, but in comparison to Betty’s pristine perfection, she looks downright slovenly.