As with all of our TV posts, we sit through each episode with a notebook at hand, indulging our secret 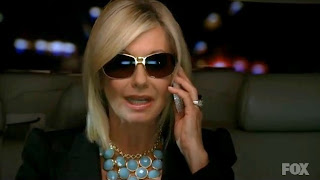 inner Lois Lanes, jotting down everything that occurs to us as it unfolds. With every episode, we’re looking for some hook, some way to start off the post or some theme around which the post can be written. As that, to our way of thinking at least, astonishing rendition of “Total Eclipse of the Heart,” unfolded, we knew we’d found our hook. It was one of those moments that quite deliberately define the series.

One recurring meme that’s popped up among television critics since the show returned from hiatus is that it’s somewhat annoyingly impervious to criticism as Glee fans en masse tend to forgive the show of any shortcomings, if they can even perceive them at all. A number like “Total Eclipse,” melodramatic, beautifully executed, quite aware of its own absurdity, and 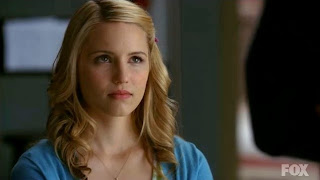 somehow inexplicably still emotionally affecting, could stand as a response to that. It’s Glee in all its unevenness being perfectly entertaining. Plausibility and consistency are no more welcome here than they were when Judy and Mickey were putting on massive entertainment extravaganzas in barns 70 years earlier. When you watch the kids jump up and manage perfectly timed choreography within seconds, you’re watching the great-grandchildren of the old Hollywood teenage musical. Just enjoy it. Besides, you’ve got the added bonus of some ridiculously funny lines.

“Will, I might buy a small diaper for your chin, because it looks like a baby’s ass.”

“I’m a delinquent. I like setting stuff on fire and beating up people I don’t know. I own that.” 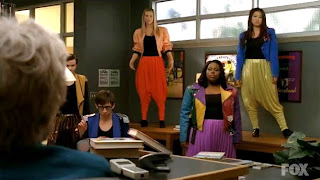 been here since first period. I had a cold and I took all my antibiotics at once and now I can’t remember how to leave.”

“Don’t start with me Castle, or I will kick you square in the taco.”

“I’m getting cold feet here..”
“Can you even feel your feet?” 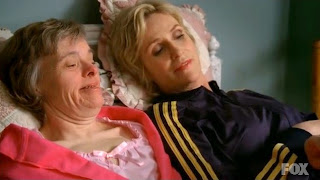 “We’re as menacing as Muppet Babies.”

“What do you want, lady-face?”

A very welcome addition to the cast is Molly Shannon as Astronomy teacher and badminton coach Brenda Castle, who can no longer teach in Indiana because, “I had some ‘drug problems’ that supposedly involved some of my ‘students.'” Her “Let’s go in this classroom and PORK!” to Will was hilarious. In fact the whole episode was one of the funniest yet. 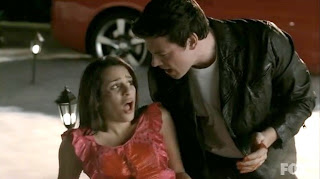 ivia Newton-John. I’ve released 7 consecutive number one singles.” In a way, that Physical video redux was even more jaw-dropping than the Vogue one, probably because the original artist was involved. It’s about as plausible as your basic Gilligan’s Island plot point, but that’s kind of the whole point, the absurdity of it.

And speaking of absurd, how hilarious that those poor social outcasts could think that dressing up in full on Hammerwear and doing a (yet another jaw-dropping) rendition of “Can’t Touch This,” would somehow give them street cred in 2010. That shot of Artie touching himself as he tried to get all sexy with the librarian had us rolling.

Then again, can you blame those poor nerds for not having a clue when they have a teacher who insists on white-boy rapping to them every chance he can get? With the inevitable performance of “Ice, Ice Baby,” it’s pretty clear that the creators are aware of what a dork he is. Or were we supposed to take that number seriously? The choreography was pretty hot but come on, Will just looks goofy when he does it and it has to be intentional. 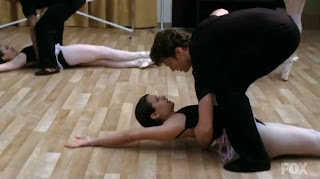 * That shot of a slightly disappointed Artie as the rest of the Glee Club stood up to dance to “Ice Ice Baby.” Not overdone, just enough to remind you of his perspective.

*In a similar vein, Sue’s scenes with her sister are amazingly free of Hallmark Channel sweetness. They appear to have a real and natural relationship with each other and Sue comes of totally believable. She actually looks more believable when she’s not wearing the mask she feels she has to wear for the rest of the world.

* In an episode full of hilarious lines and numbers – seriously, it was pure karaoke night when it came to the music – Rachel’s over-wrought and totally Rachelesque version of “Run Joey, Run” is an instant classic. Absolutely laugh out loud and a totally believable character point.

*It was good to see Ken Tanaka again, even if only for a second. And we thought they’d totally forgotten a 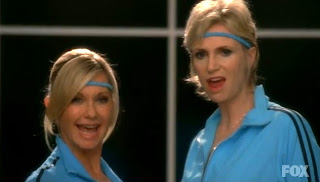 bout Sandy Ryerson, but there he was, toting a shotgun in Rachel’s video.

*To be honest, we thought the whole Glist thing was a yawner. It was a perfect Macguffin to spur all the subsequent actions in the episode, but we weren’t all that invested in the mystery and when it was revealed to be Quinn, we didn’t have the emotional reaction we think we were supposed to. “You’ve lost so much, Quinn.” It made sense, and we like Quinn more and more, but it really doesn’t justify being a bitch all the time.

* And FINALLY. Someone said it: “You’re a slut, Will.” In fact, EVERYBODY said it. “Hey, man-whore.” Like we’ve been trying to say, this show is very aware of every implication and shortcoming and addresses each of them when it feels like it. Last night’s episode is an instant favorite precisely because it was such a meta-textual kind of episode.