This episode’s rather heavily hammered theme was “home,” whether that means a physical space, an emotional one, or the combination of the two represented by a person’s own body. But what it really was about (at least to us) was selfish, stupid teenagers. 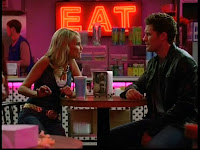 To our way of thinking, realistic portrayals of teenagers are hard to come by, even on this show. They’re either depicted as vapid, sex-obsessed, or precocious to the point of sounding like the cynical 30+ year old writers who put lines in their mouths. We’re not saying that all of these tropes don’t occasionally find their way into this show, but the one thing they got right about teenagers in this episode is this: they are people who have all the emotional needs of an adult but lack the experience to express those needs. In short, they can be selfish and stupid every now and then, just like the rest of us.

In addition, despite the fact that it made us squirm in our seats, the show once again skewered sacred cows by portraying The Gay One as shallow and selfish and inappropriate in his affections. Kurt’s scheming to get Finn is, as we said, squirm-inducing, but it rang very true to us and we salute the show creators for not portraying the gay one as some sort of 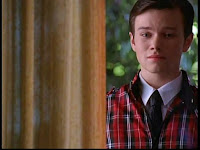 moral paragon that can teach a lesson to the rest of the cast. The pink version of The Magical Negro. It’s a type of portrayal that’s haunted gay characters for a couple decades now and we’re thrilled to see someone say “Fuck that. Gays are just as dumb and fucked up as the rest of us.” It’s not just that he’s trying to trick Finn into sleeping with him, he’s also playing with fire by playing with his father’s emotions only to turn around and plot to take away the thing that’s making his father happy, all because he’s feeling insecure. On top of all that, he berated his best friend into feeling bad about herself so he could get a shot at school popularity. Yes, little Kurt Hummel of the pear-shaped hips can be quite the selfish bitch when he wants to be. To his credit, he seems to have learned his lesson. 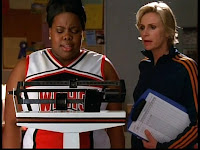 just say, speaking as former closeted gayboys, watching your father light up the room when he gets the chance to indulge in guy talk with another boy your age is in fact a deeply painful experience for a lot of us, but most of us would have chopped off a finger or two for a dad as wonderful and supportive as Burt Hummel. We want to slap Kurt for not realizing how damn good he has it.

We’re kind of hoping that Burt and Finn’s mom wind up marrying because a) it would be cute, and b) the thought of Finn and Kurt as step-brothers is just too delicious to pass up. Plus we want to see Kurt dress Finn’s mom for the wedding.

In other news, Splits Magazine has just named Sue Training Coach of the Last 2000 Years. With the reporter completely misreading what happened during the pep rally, and promising to write a glowingly supportive article, a new and interesting development arises. Sue will be back on top and in power, but beholden to an inclusive point of view that is completely 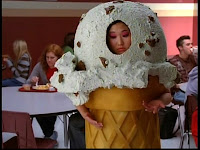 anathema to her. It’s a clever way of upending the status quo while at the same time maintaining it. Well done, writers. And a shoutout to Jane Lynch. Pay attention to her whenever Sue is backed up against the wall. She does this wild-eyed thing where you can see the wheels turning in her head. It’s both hilarious and a neat little acting trick.

Musically, this was not one of our favorite episodes, although we were thrilled that they gave Lea Michele’s pipes a rest and let some other cast members step up. Lorenzo hated Kurt’s rendition of “A House is Not a Home,” but Tom thought it was sweet, especially since he really gayed it up for his performance style. Mercedes’ rendition of “Beautiful” was, of course, sublime. Will and April’s rendition of “Fire” was great but man, we’re still not sure how to take Matthew Morrison’s performing style. Is he parodying the eyeroll-inducing soulful white guy bit or is he really like that? Their later duet/mashup of Babs Streisand’s “One Less Bell to Answer/A House is Not a Home” was cheesy (and not in a good way) and weirdly staged, what with them wailing their lungs out as they get into bed. 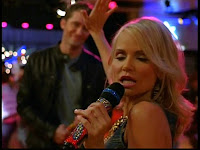 Which reminds us, Will is a shit when it comes to women, isn’t he? We were hoping Terri would walk in and we’d be treated to a Terri/April throwdown. Oh, and that also reminds us that we haven’t SQUEEEEE’d yet over Kristin Chenoweth’s return to the show. Like we said, musically this episode was a little disappointing, so Kristin wasn’t really put to best use on that front, but she sure did get some fantastically funny lines in. More April, please. 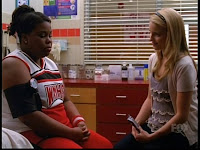 And finally, we are falling a little in love with Quinn Fabray. The perfect combination of mean girl bitch and the girl who’s had a hard time and now has a heart. Her scene with Mercedes could have come off like an Afterschool Special but these two actresses nailed it and we felt little tears and little throat lumps forming.

Okay, before we turn the floor over to our kittens so they can berate us for not mentioning their favorite parts, let’s do a quote rundown:

“You could stand to lose a few, kiddo. Got hips like a pear.” 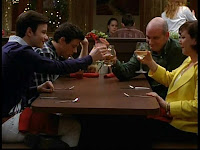 “How about dropping the attitude? That’s gotta be worth a pound or two.”

“Will Schuester?! I just had a sex dream about you!”

“I finally realized my life long ambition of being a mistress to a strip mall tycoon.”

“You’re just like every teenage girl in America: obsessed with vanity. Before you know it, you’ll be leaving baggies of upchuck in your parents’ linen closet.” 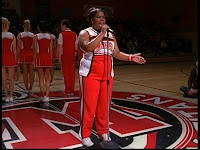 “I’m pretty sure my cat is reading my diary.”

“Toile? I always pegged you as the Chinoiserie type.”

“You were conceived on a pinball machine.”