Darlings, we are so very excited about this series (you heard us: “series”) of posts. You see, we got it in our heads that we wanted to do a Top Ten Betty Draper Looks post as a way of counting down (and building up excitement) to the Season 4 premiere of Mad Men in a couple of months. After all, screencaps + fashion. Darlings, we were born to do such a post.

But then we got to talking. “Waitaminnit,” we said in creepy unison, “If we’re going to do a Betty post, then we simply MUST do a “Top Ten Looks of Joan Holloway” post as well.” After all, these two characters are, as we once said, iconically beautiful and stylish in that way that ensures they’ll be talked about for years after the show goes off the air. Excitedly, we got down to work trying to come up with our favorite outfits over three seasons. But a funny thing happened along the way.

We’d be re-watching our DVDs, keeping our eagle eyes out for the next fabulous Joan or Betty ensemble when we’d be stopped in our tracks. “Say, that outfit Rachel Mencken wore the first time she kissed Don was pretty fabulous.” or “Wow, that checked dress looks fabulous on Peggy,” or “SQUEEEE!” any time Trudy Campbell walked into a scene. It became quickly obvious to us that there was no way we could examine the female fashion on Mad Men without looking at ALL the females. Costume Designer Janie Bryant deserves every bit of acclaim and applause that has come her way since she started work on the show. Think of this series of posts as a mini-retrospective. We’ll work our way up to Joan and Betty by looking at each of the other characters first. Who knows? Maybe we’ll get to the men too. Kittens, we could probably come up with 500 words on “The Ashtrays of Mad Men.”

Of all the fabulous females that have appeared on this show, no single female character dressed better than Season 2’s Bobbie Barrett, memorably portrayed by the dead-sexy, raspy-voiced Melinda McGraw. Betty, Joan, Trudy and all the rest each got to wear various fabulous ensembles, but Bobbie’s clothes were more obviously expensive and straight-off-the-magazine-cover fashionable, befitting her show business background. She didn’t appear often enough for us to compile a Top Ten list just for her, but if we were compiling a list of the Top Mad Men Looks of All Time, it would be hard not to include every single one of these looks. She may have been a little crass and a tiny bit of a bitch, but her clothes were always top of the line. 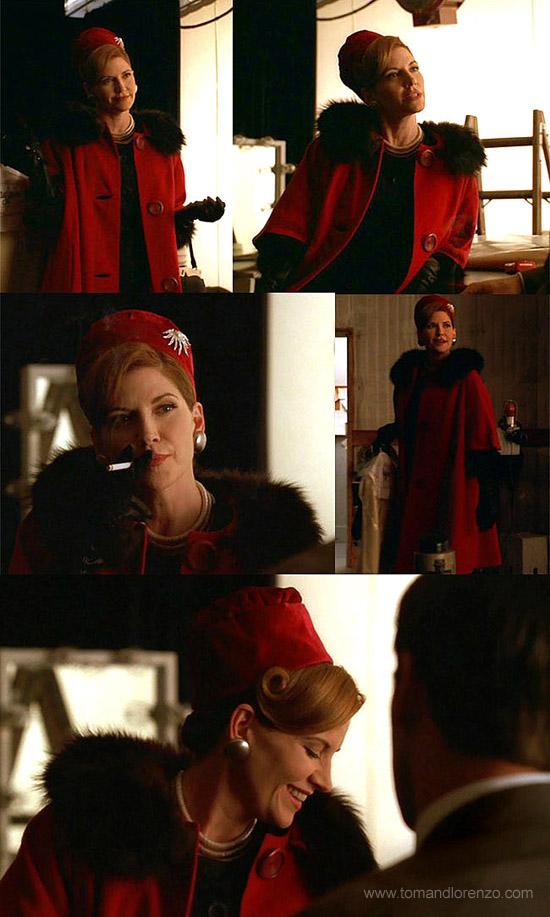 The great thing about Bobbie’s clothes is that every time you see her, she’s fully loaded, from hat to brooch, to purse. Not a thing out of place or discordant. Everything matches and is just so. The effect is that of a suit of armor; impenetrable.This is the scene where we meet her for the first time and her clothes reflect what the dialogue demonstrated: She’s not like the other women Don knows. She’s just as smart and ambitious as he is and he can’t intimidate her or talk her into a thing. The deep red, the tall hat and the big fur collar – even the over-sized buttons – all help depict her as formidable. 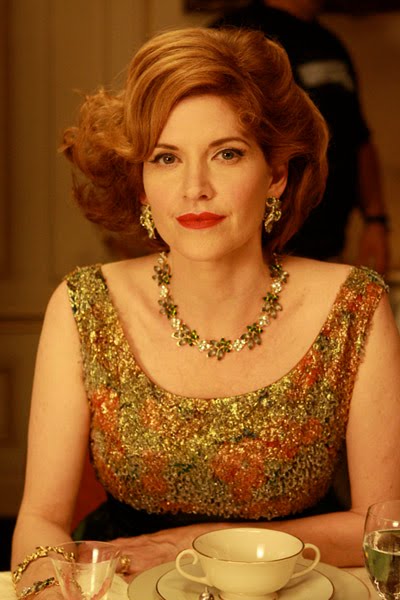 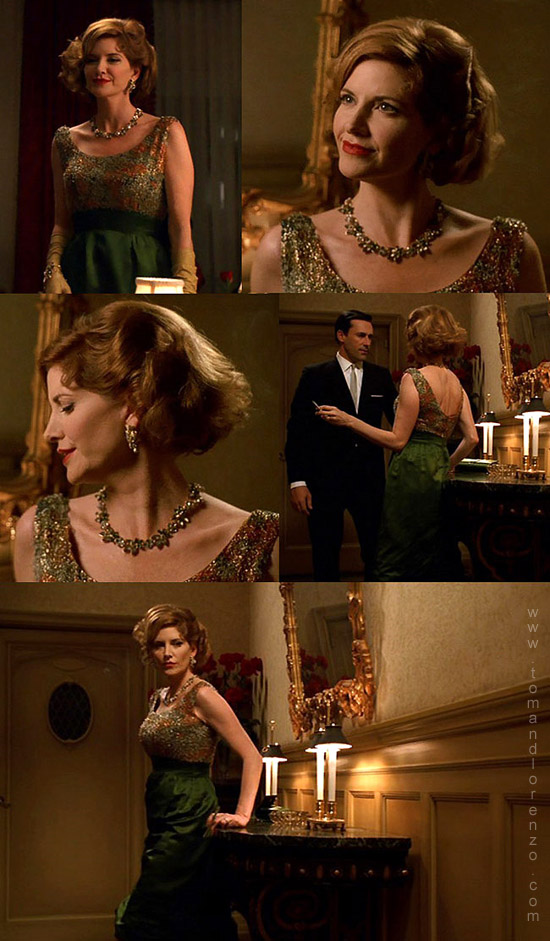 Of course the episode ended with Don asserting himself in the most overtly “I’m the man” move you could think of as he jammed his hand up her skirt and literally told her to “do what I say.” It was a shocking scene and maybe it’s not surprising that Bobbie looks more traditionally feminine and exposed in this look.

We have to say, as disturbing as this scene was, we adored this outfit the first time we saw it. It looks like something Louise Tate would have worn to Darrin and Samantha’s house for cocktails. 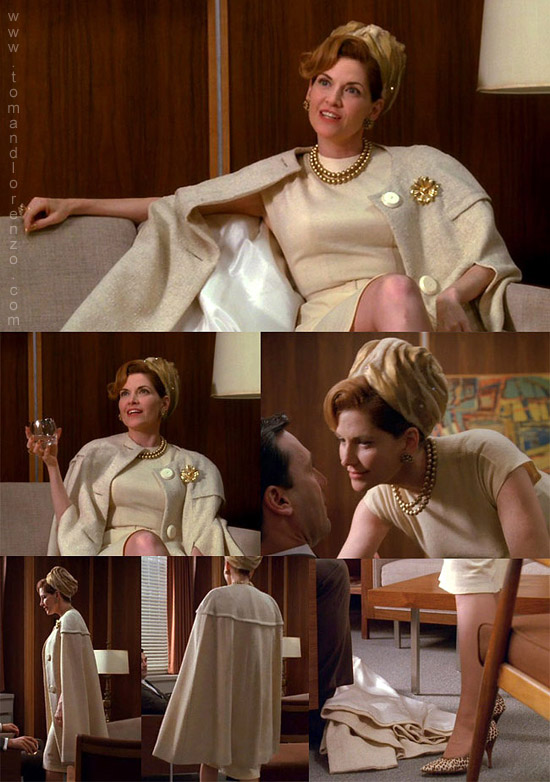 Those shoes are to die. 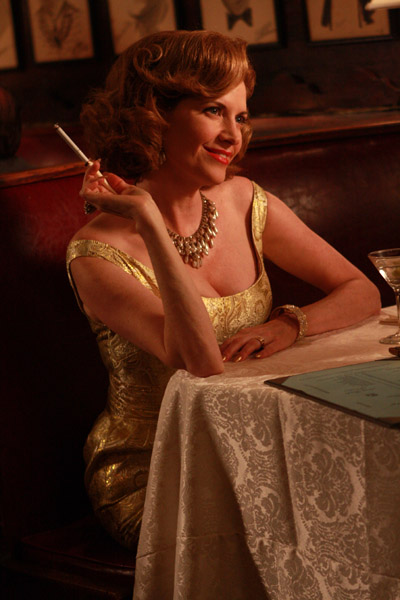 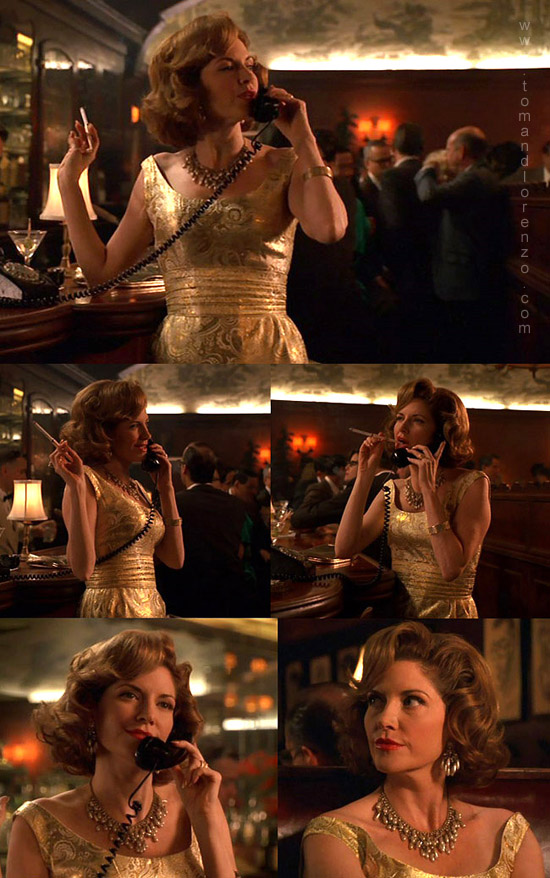 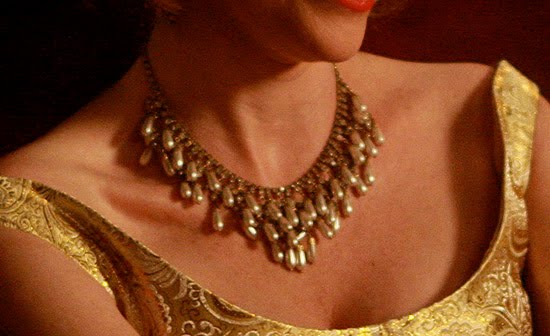 Looks like it’s time for another girly-girl party dress. Exposed neckline and arms, metallic fabric and a heavy necklace. It’s sexy and of-the-moment fashionable but it’s also, again, a little more vulnerable than her daytime looks. Once again, she takes off the armor and she finds herself in trouble. This is the dress she wore when Don crashed the car, forcing her to hide in Peggy’s apartment for a couple of days with a black eye.

J’ADORE the cigarette holder. We don’t believe in glamorizing smoking, but come ON. That is fucking GLAMOROUS. 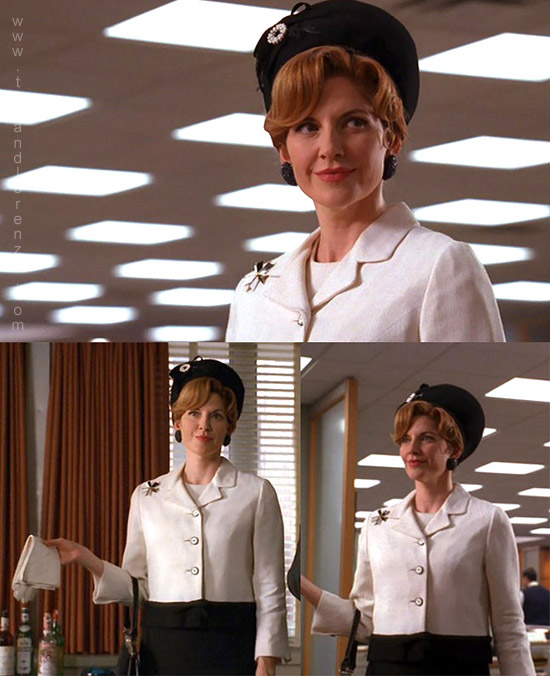 And here we are at the end of the episode, after she and Don have successfully managed to hide their secret car crash from everyone but Peggy. She’s in Don’s office with her husband Jimmy. She and Don are both unsure of how much Jimmy knows when this scene begins.

Once again, she’s in her daytime battle suit, but it’s notable not only for the stark black and white quality, but also for how downright prim it is for Bobbie. No extravagant coat or oversized buttons. Even the jewelry is relatively toned down. Love her carrying the gloves around. Like cigarette holders, the return of ladies wearing gloves is not something we’re prepared to argue for but we can’t help thinking it looks fabulous. 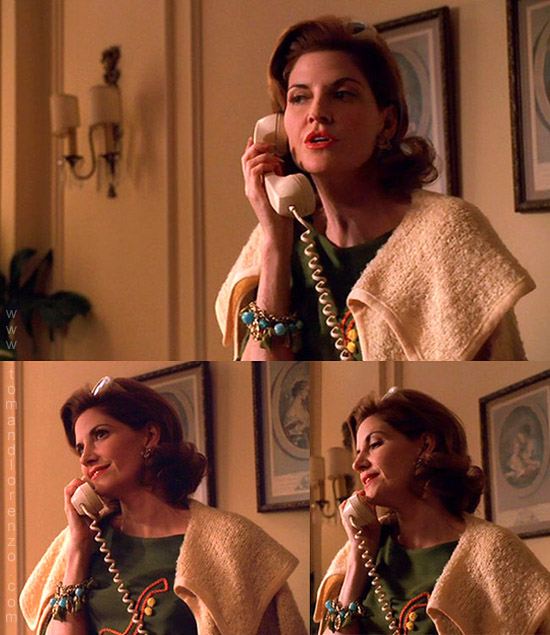 Here’s Bobbie on the phone with Don revealing the fact that she has children to him. It was something of a theme this episode as Betty’s little stable flirtation was visibly uncomfortable dealing with the reality of Betty’s children, just as Don was uncomfortable dealing with the idea of a maternal mistress. This is as soft as Bobbie’s ever looked on the show, which is clearly no coincidence given what the scene is about. It’s still Bobbie: big collar, big costume jewelry, that easy chicness embodied by the glasses on her head, but it’s Mommy Bobbie, not Bad Girl Bobbie. 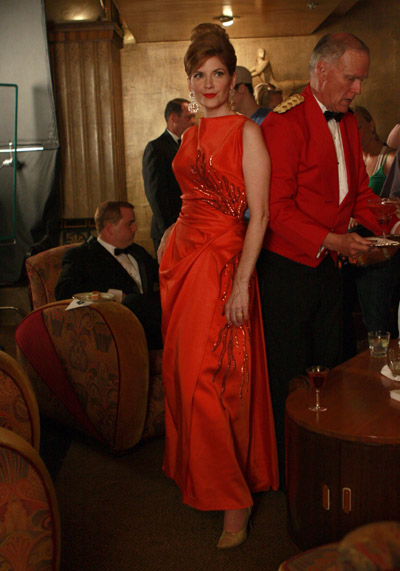 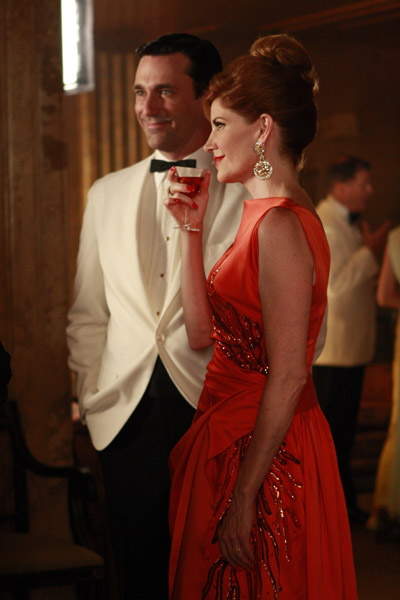 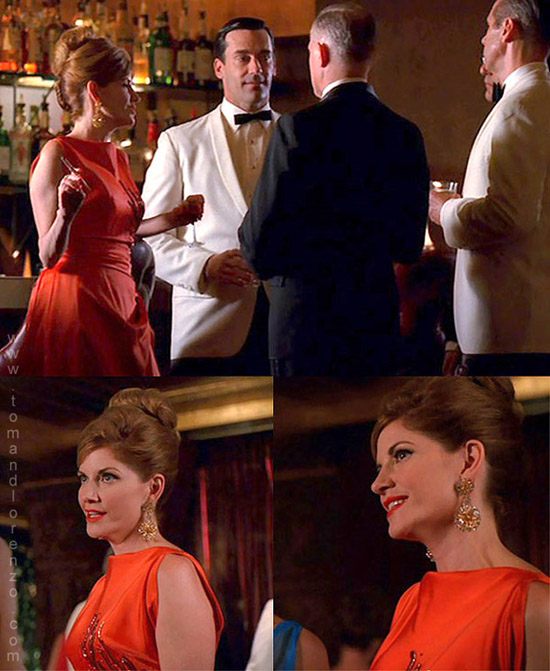 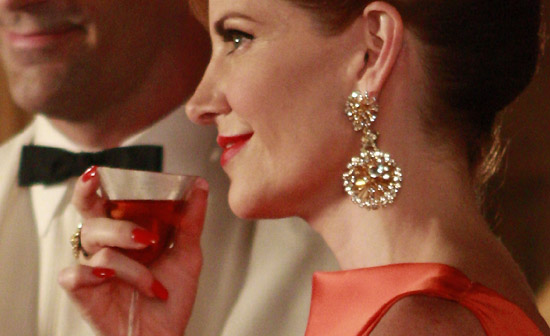 And here’s our final look at the fabulous Bobbie, the last outfit we ever saw her in. It’s once again notable to point out the context. This is the scene where Jimmy takes Betty aside and informs her of the affair. Bobbie still looks fabulous here but she looks harsh next to Betty’s soft blue dress (which we’ll of course get to later) and the lighting, angles and makeup all conspire to make her look older and a little hard. This is Bobbie not through Don’s eyes, where she was seen as either a worthy opponent or a worthy sexual partner; this is Bobbie through Betty’s eyes, a hard woman who ruins marriages.