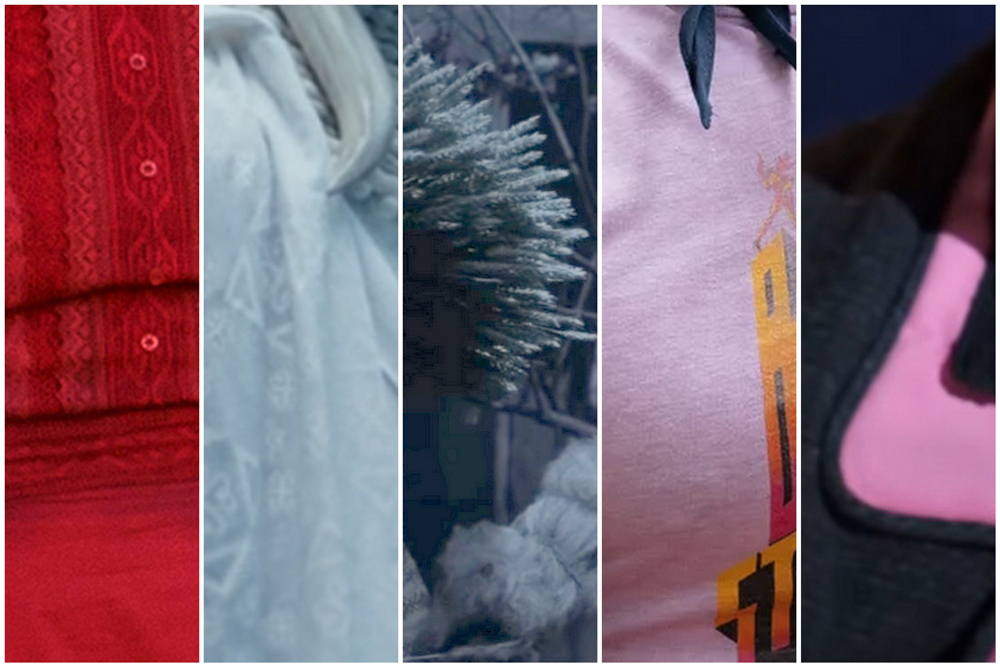 Bouncing from high fantasy to gays in jorts, our list of our favorite movie costumes of 2022 continues. Catch part one here. In Elvis, director Baz Luhrmann let his maximalist tendencies run rampant, combining the iconography and myths of Elvis Presley with his own over-the-top stylistic flourishes to create a sort of truth surrounding the legend. Nowhere is this approach more evident in the scene where the young singer makes his stage debut at the Louisiana Hayride in a pink two-tone suit and black lace shirt. The costume is based on a real stage costume Elvis wore at the time, but in Luhrmann’s …um… hands… it turns Presley into a gigantic pink vibrator onstage, bringing the female audience members to orgasm simply through the power of his pink-clad pelvis. Using costume design and editing, he turns Presley from a burgeoning sex symbol to a gyrating dick onstage. As always with Luhrmann, it’s too much, but it’s a considered and thoughtful form of too much. 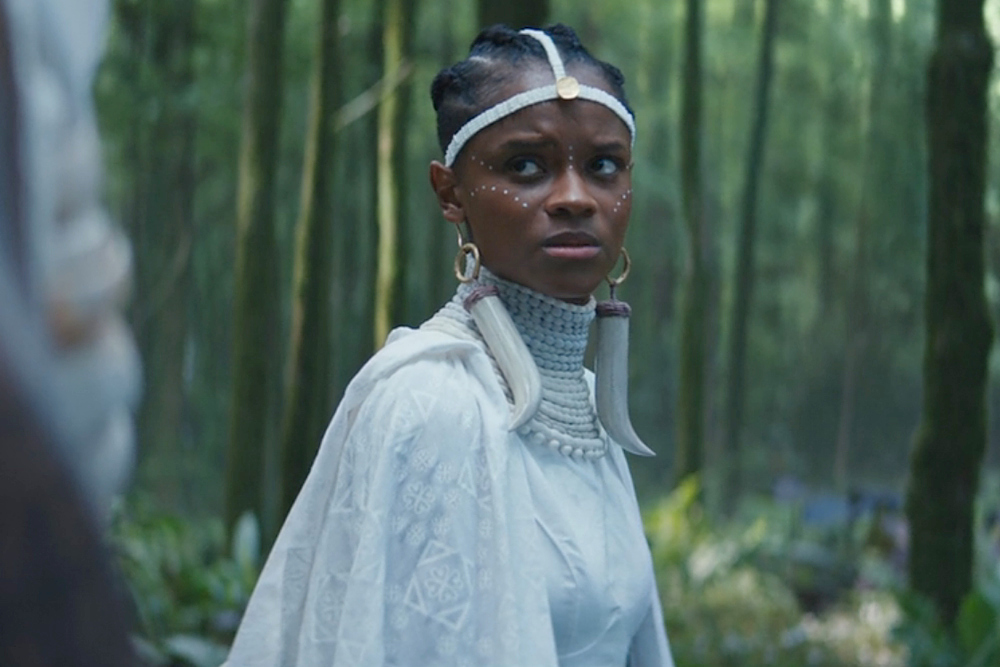 Grief was the overwhelming theme of Black Panther: Wakanda Forever, permeating nearly every scene, driving all of the main action, and even being embodied in Ruth E. Carter’s jaw-dropping afro-futurist costume design. Wakanda, like many real-world African cultures, expresses grief and mourning through the wearing of white, as they emotionally usher their loved ones from the physical world to the realm of their ancestors. One of the character points in Shuri’s journey had to do with her reluctance to engage in activities that smacked of superstition to her, including the Wakandan tradition of burning one’s mourning attire to signal the end of the mourning period, which could be seen as a reason why she had to wear this mourning attire on two different occasions in the film. Our reasons for including it here should be self-evident. Not only does it encapsulate and illustrate the themes of the film and the progression of a particular character, it’s also just a straight-up stunning costume. The Northman, director Robert Eggars’ Viking epic based on the myths and stories that inspired Hamlet, is a film of tremendous violence and dark, unseen magic. After raiding a village with his fellow berserker outlaw Vikings, exiled prince Amleth (Alexander Skarsgard) comes upon a mysterious, otherworldly seeress in a temple, portrayed by the mysterious and otherworldly Björk. She tells him of his fate and the deeds he must do in order to secure his future and his retribution. Now, you could argue that merely having Björk in the scene is enough to lend it the kind of weird gravity it requires, but costume designer Linda Muir took things as far as they could go in the costume design, rendering the Icelandic pop star as a figure of power and mystery, darkness and the unseen world. 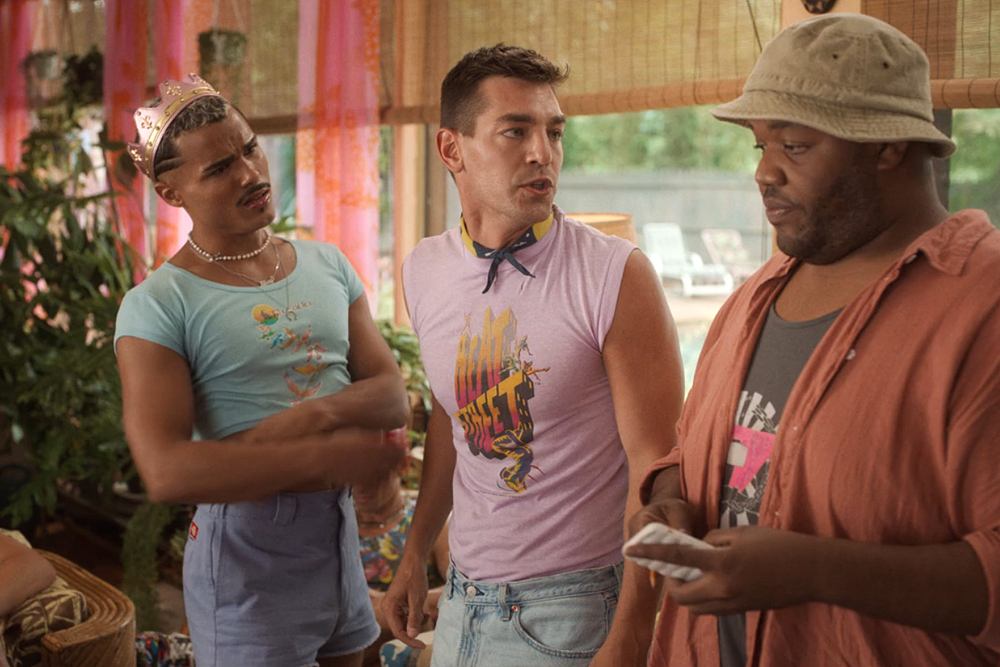 We’ll always have a special affection for work-a-day film costumes that look like regular-people clothes but subtly fullfill the primary job of costume design: to tell you about the character wearing it and to underline the themes of the story. In Fire Island, director Andrew Ahn retells the story of Pride and Prejudice, with all of the Bennet sisters switched out for bitchy gay men but with all of the class commentary fully intact. Matt Rogers plays the ostensible Lydia Bennet of the group, Luke, a flirtatious, flamboyant, and funny queen who sits outside the high social status of body queens and money queens that populate the island but sees no impediments to getting exactly what he wants out of his trip. Much is made in the film of who gets to go shirtless and who doesn’t, as well as who wears expensive shirts and who doesn’t. Luke’s vintage Beat Street t-shirt and jorts signals that he is neither a body queen nor a money queen, but he is a queen who loves a good pop culture reference and understands camp, which is why it’s so perfect for the scene where he hilariously recites Marisa Tomei’s monologue in My Cousin Vinny. Even if we didn’t include the shot with the axe, we think anyone looking at this costume without knowing the plot of the film would easily figure out that the wearer is in a state of mental unwellness and has the capacity for tremendous violence. It’s just that kind of dress; sort of like Sissy Spacek’s relatively nondescript prom gown in Carrie. There’s something so basic and underwhelming about the design that it comes off a little creepy and unsettling in spite of itself. The literal blood-red color helps. In director Ti West’s Pearl, Mia Goth plays the title character, a Texas farm girl in 1918, leading an utterly miserable life and dancing (quite literally) on the edge of madness. She steals one of her mother’s old dresses, commits a couple of murders, and heads to town to audition for a traveling dance troupe, considering it her one desperate shot of getting out and having the life that she wants. One look at this frock tells you exactly how the audition is going to go – it’s not just unsettling with an implied violence to it, it’s also clearly decades out of style compared to what the other girls are wearing. To the characters around her, this dress would look frumpy and sad, but ironically, it’s an extremely on-trend dress to the audiences of 2022 (we’ve covered countless prairie dresses on red carpets in the last five years), which means it operates on two levels: in-story, as an indication of the wearer’s status, and outside the story, as a visual so striking it almost looks like a Valentino ad campaign.

More to come in our final installment!