Home » Movies » Our Favorite Movie Costumes of 2022, Part ONE

Our Favorite Movie Costumes of 2022, Part ONE 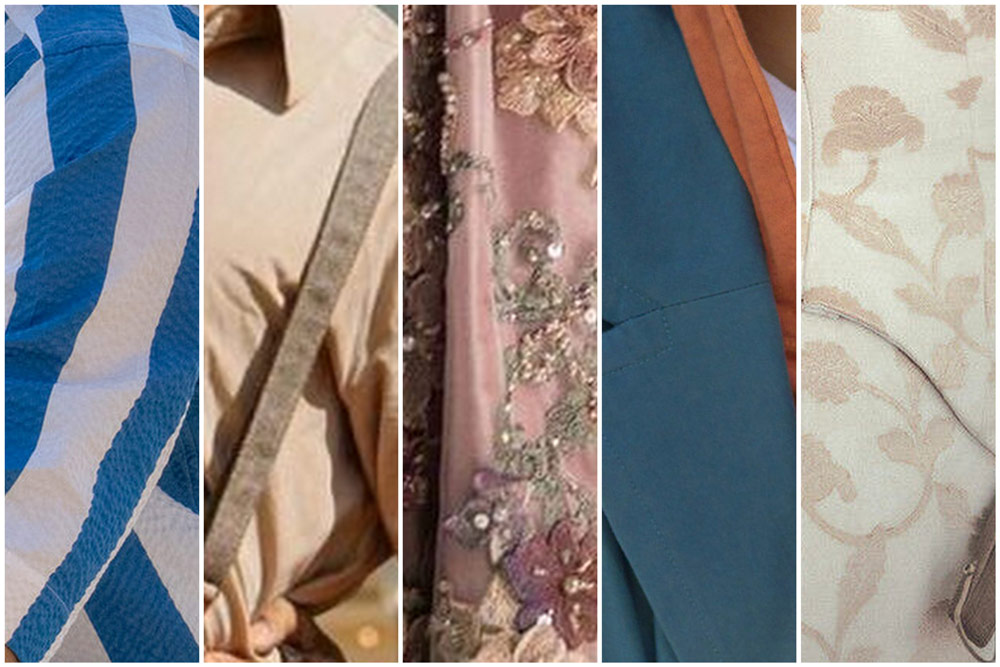 And now for our favorite new year-end tradition, our (2nd) annual listing of our favorite movie costumes of 2022. Unlike our Best Red Carpet Looks list, this isn’t a countdown nor is it a rating of the best costume design work. It’s merely our choices for the costumes in film that stood out most to us this year, for a whole range of reasons. The costumes on this list can be jaw-dropping fantasy pieces, impeccable couture pieces, or plain old work-a-day outfits. They were included because they underlined themes, illuminated character, or just delighted us and imprinted themselves on our brains. If there’s any point here – aside from highlighting the fine work of costume designers – it’s to show you all of the various reasons why costume design appeals to us and how it provides such high value to any film. In director S.S. Rajamouli’s explosive and eye-popping historical epic RRR, N.T. Rama Rao, Jr. and Ram Charan Teja play Indian revolutionaries Alluri Sitarama Raju and Komaram Bheem, who have been reimagined not only as best friends, but as a shining example of the depths and power of male platonic friendship. When they crash a fancy British party, they launch a dance-off in order to impress all the white British ladies in attendance and embarrass all of the foppish and foolish British men. The ensuing musical number is an all-timer and a jaw-dropper that has to be seen to be believed.

While these costumes aren’t necessarily the most gorgeous things you’ll see in this film, they work beautifully in the scene, not just in the way the suits are cut to allow both men to do the extreme dance movements while remaining extremely fitted to their muscular bodies, or how the suspenders became an essential aspect of the dance itself, but also because they are wearing what could be seen as quintessential examples of fine British suiting; respectable grays and tweeds that only underline just how little these British style tropes can hold back their exuberance and their own power. They are beating these men at their own game, wearing their clothing and looking hot as fuck. 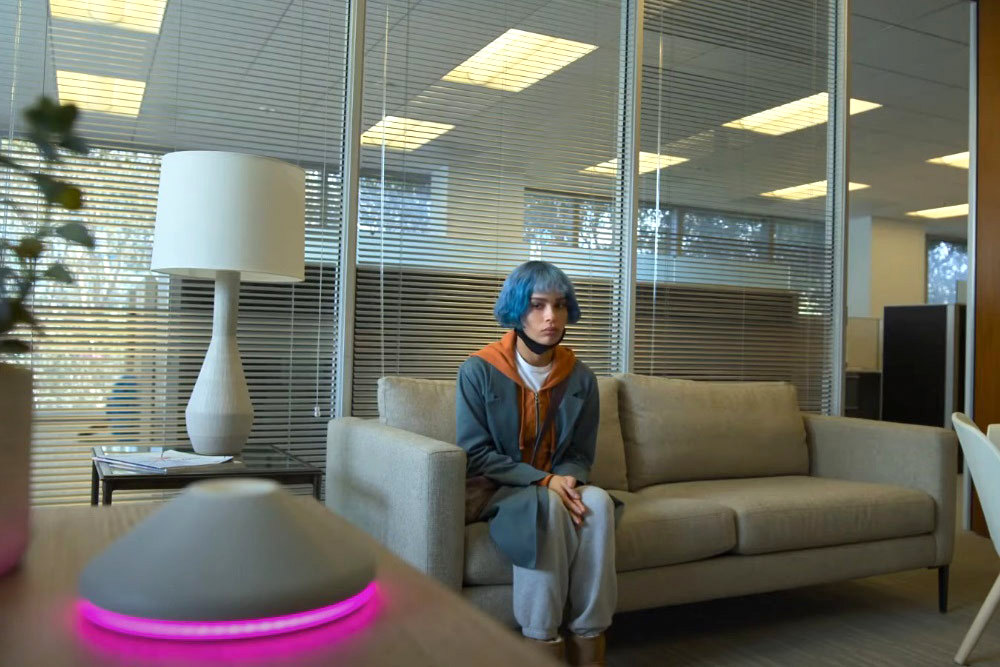 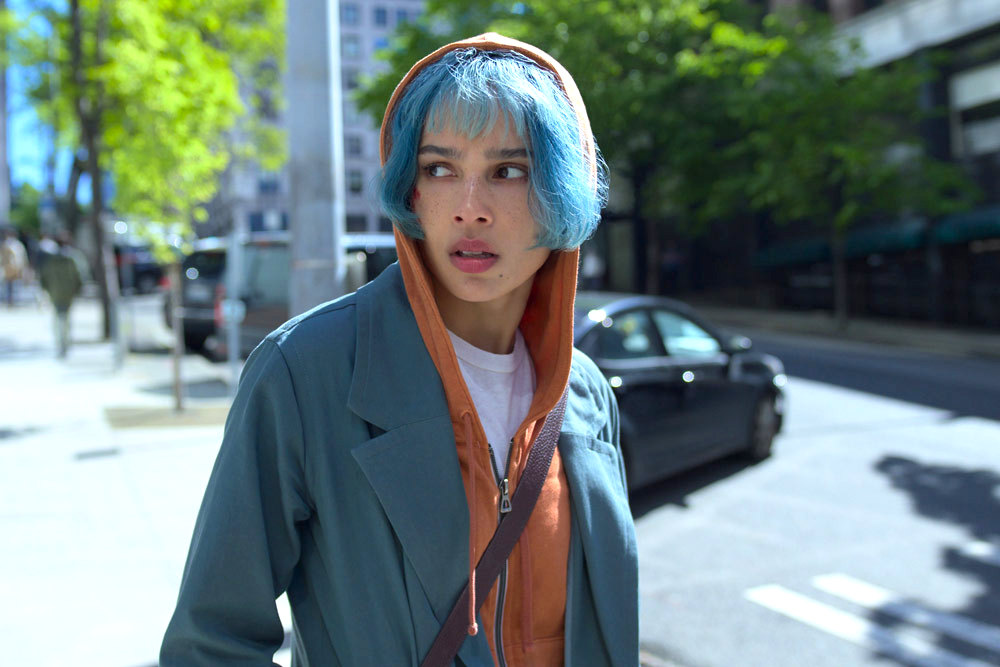 When Tom urged Lorenzo to watch director Steven Soderbergh’s thriller Kimi, about an Alexa/Siri device at the center of a murder mystery, he said “It’s sort of like Hitchcock directed a film about the Covid-19 lockdown.” Zoe Kravitz plays Angela, a tech employee with anxiety and agoraphobia who works from home monitoring and flagging requests made to the Kimi device when she discovers what sounds like a murder. In order to get anyone to pay attention to what she’s discovered, Angela has to leave her apartment, which is something she finds nearly impossible to do because of her mental health issues, which were exacerbated by an attack in her recent past. In order to screw up her courage and get out into the world, she dons this orange hoodie and teal overcoat. These items are not notable on their own, but when she wears them in combination with her blue hair, the result is, like all of the best Hitchcock heroines, totally unmissable onscreen; part colorful armor, part wounded bird, part superhero costume. Sometimes, a costume is so beautiful and so important to the overall story, that it makes an impression without anyone having worn it onscreen. When London charwoman Ada Harris (Lesley Manville) spots this Dior Couture creation draped over her posh client’s chair, she is transported to a dream of a better life for herself, completely enraptured by the power of high fashion and the allure of unattainable beauty. The dress is, of course, quite beautiful, as it would have to be in order to accomplish what it needs to for the scene. You have to understand why Ada is so enthralled by it and why it would spur her on to make some choices about what she wants out of her life. We love how the pastel floral motif of the dress clashes with/gently mocks the naive florals of her Liberty print work dress and apron. Notice how her makeup suddenly gets more glamorous and the scene goes soft-focus in her closeup. She is fully transformed in the moment by a dress she isn’t even wearing. 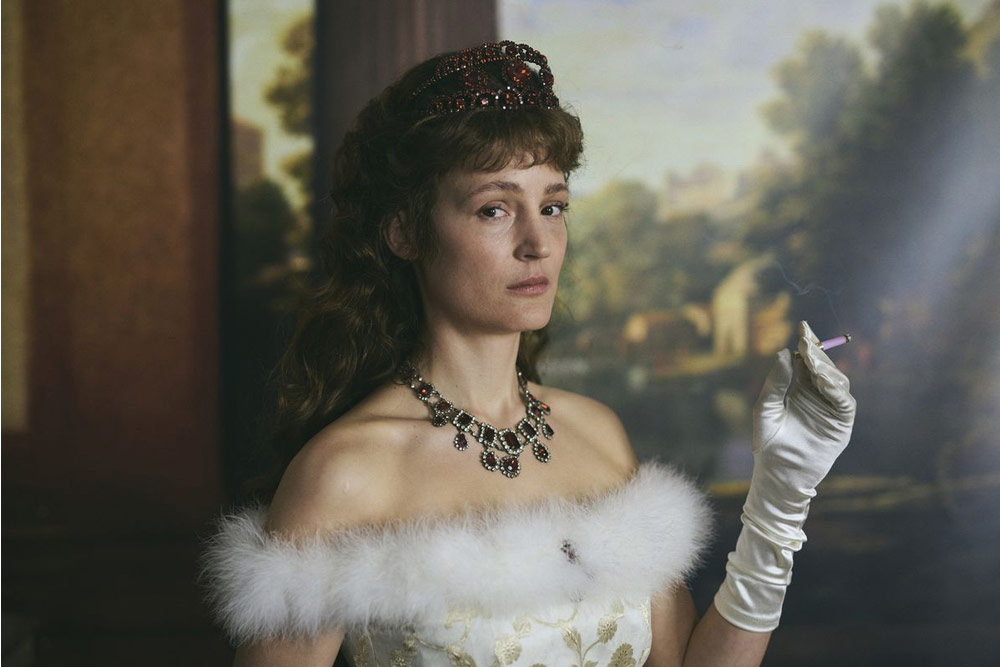 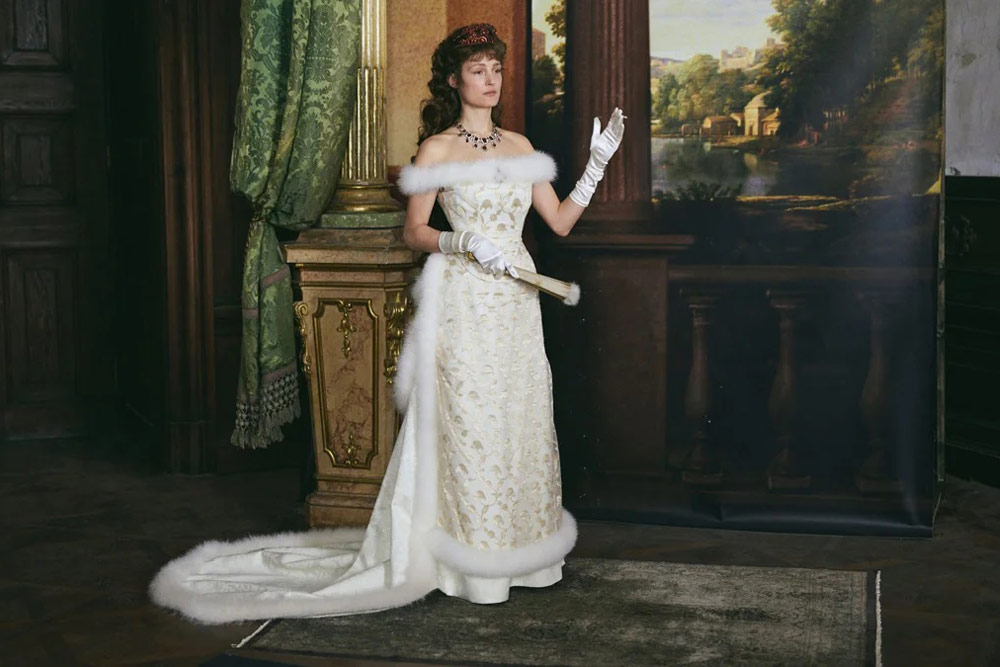 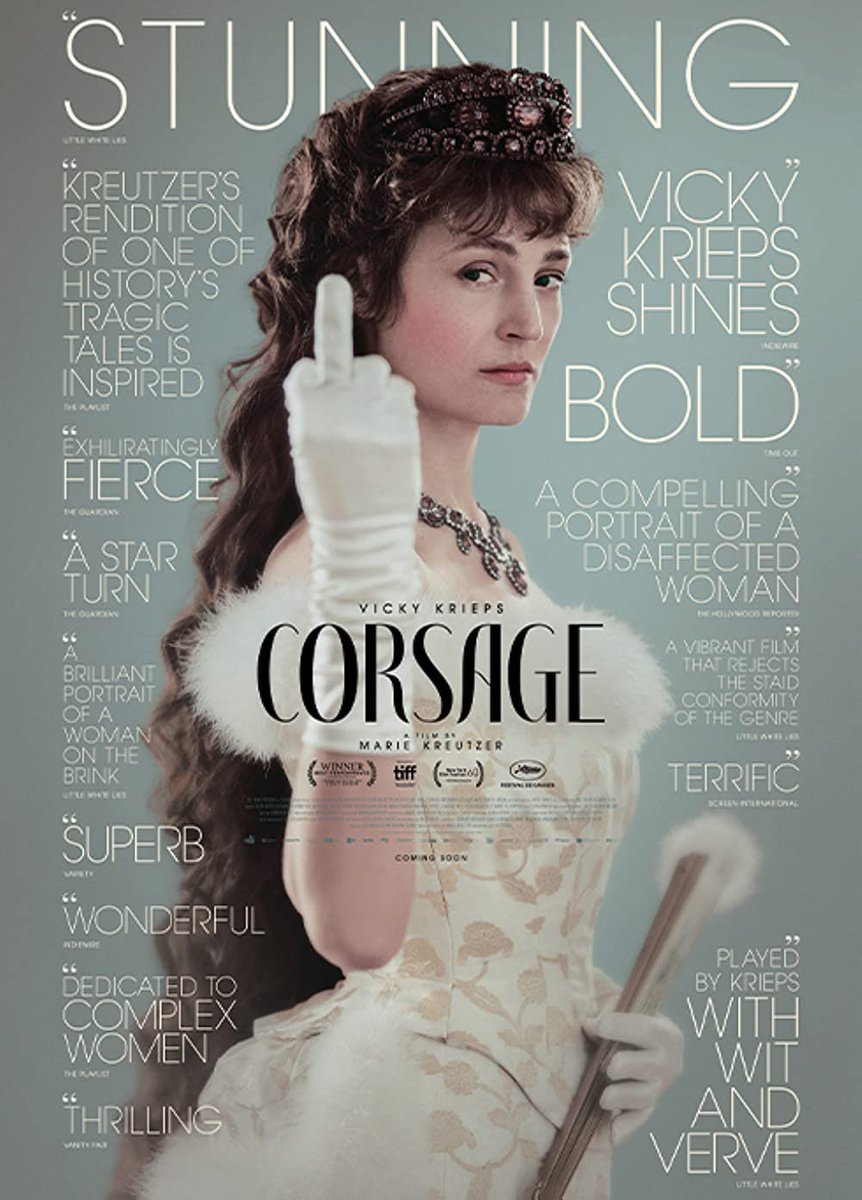 In director Marie Kreutzer’s Corsage, Vicky Krieps is freaking astonishing as the bored, rebellious, depressed and disaffected Empress Elisabeth of Austria on the occasion of her 40th birthday. The public is obsessed by her beauty, her husband has no regard for her, her children are vaguely embarrassed by her antics, and she spends her time doing everything she can to strain against the royal restraints that bind her even as she pursues an ever-smaller (and disturbingly unhealthy) waist through obsessive exercise, disordered eating, and the harrowing tightening of her daily corset. She wears this gown to pose for another official portrait, bored by the process and sneaking a cigarette the whole time, yet looking as flawless as the world demands of her; to the point that she can barely move at all. She’s turned herself into a mink-draped statue, bored and resentful, beautiful and alarmingly perfect, only to have her husband wander in and disregard her once again. It’s a costume that asks the question she can’t quite articulate through the film: “What is the point of all this?” 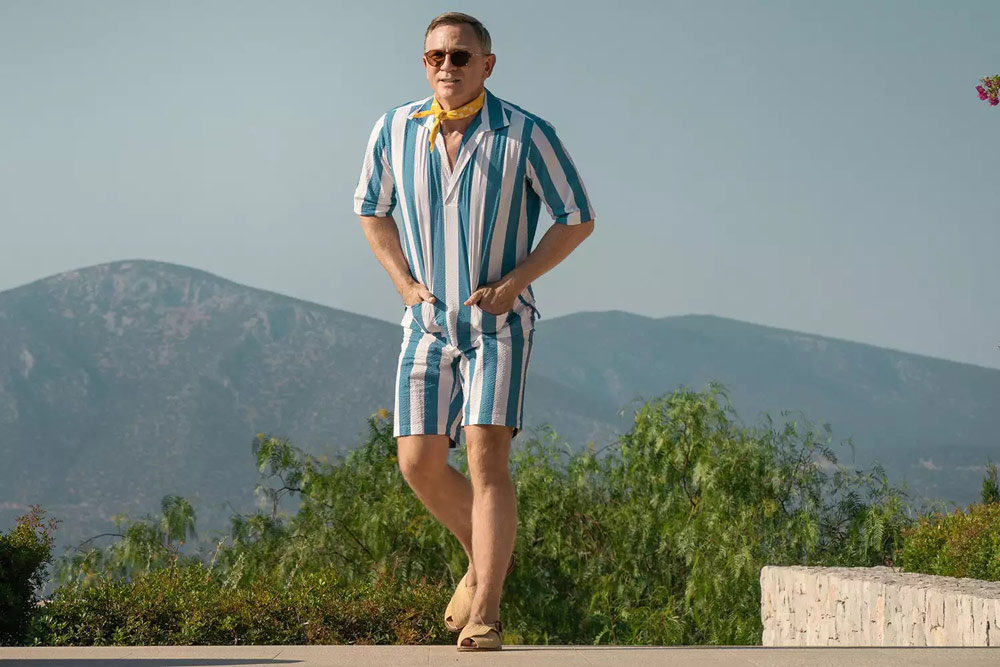 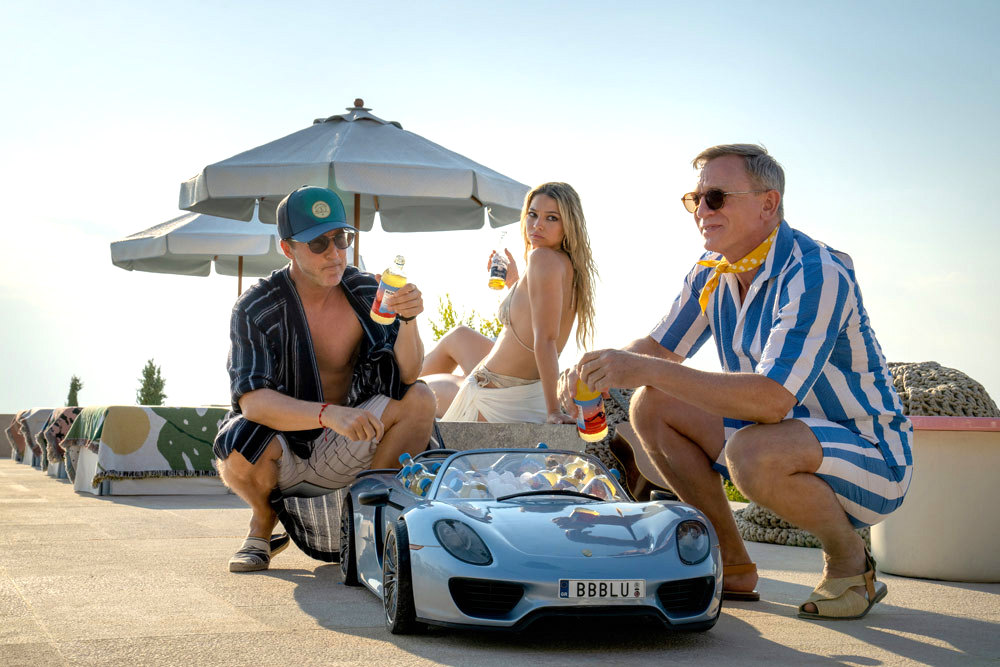 At one point in director Rian Johnson’s Glass Onion, Benoit Blanc (Daniel Craig) warns another character that he’s not Batman. We, for our parts, vehemently disagree. When he showed up as a surprise quest to a billionaires private Greek island on the weekend he’s hosting his friends, the world famous detective came to the pool party in a two-piece seersucker bathing costume (because swimsuit seems too prosaic a term) which he accessorized with a pair of peep-toe slingbacks and a yellow kerchief tied jauntily around his neck. We felt like we were looking at the dawn of a new superhero created entirely for middle-aged gay men to look up to. We call on all of our aging gay brethren to wear this exact outfit for Pride next year. As for Benoit, we’re amused to consider the idea that he’s so innately camp that he’d attend a pool party on a Greek island while dressed in a Greek flag-themed party outfit. Blanc is clearly something of a dandy and chooses his clothes carefully, so we while we have no doubt he loves this outfit and thinks he looks cute as hell in it, we also tend to think this is a bit of put-on; a way to play up the “southern hokum,” as he called it, and render himself a slightly ridiculous and unthreatening figure. It’s sort of like Miss Marple or Jessica Fletcher, except gay and southern.