We’ve compiled a list (not a countdown) of our favorite (not necessarily “best”) movie costumes of the year and we’re explaining why each one resonates and has deeper meaning. You can read parts one and two here and here. In director Jordan Peele’s Nope, Keke Palmer’s performance as Emerald Haywood, who inherited her family’s stunt horse ranch along with her brother OJ (Daniel Kaluuya), was so charismatic and full of personality that it almost didn’t need any help from the costume design to effectively get her character across to the audience, but costume designer Alex Boivard went hard anyway. EVery one of her costumes is so loaded with quirkiness and personality that they might have seemed distracting if a lesser actress had been wearing them, but it felt like Palmer let the costumes fuel her performace. Boivard has said that Emerald’s extremely laid back personality informed much of what her character wears, and that she is likely to have thrown together outfits based on hand-me-downs, vintage finds and even clothes left behind on the ranch. This is her introductory scene and the costume, like so many introductory costumes, tells you everything you need to know about her. She’s a little wild, a lot of fun, and extremely at home on a film set, unlike her brother. The sweater has the dual purpose of matching her nearly perfectly to her surroundings while also underlining her name. It isn’t the only time Emerald will wear green in the film (she does so again at the climax) and we think it says something about her that, through all of her picking through boxes and thrown-together ensembles, she’s still a girl who’ll dress according to a theme when the impulse strikes her. Wild and laid back, but also thoughtful and expressive.

Kerry Condon, THE BANSHEES OF INISHERIN 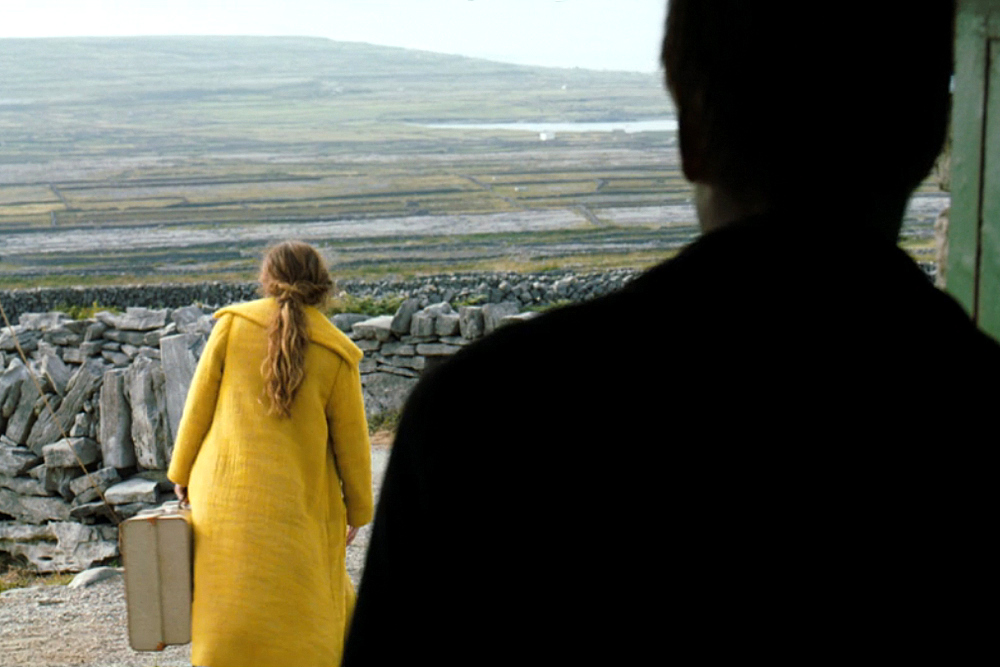 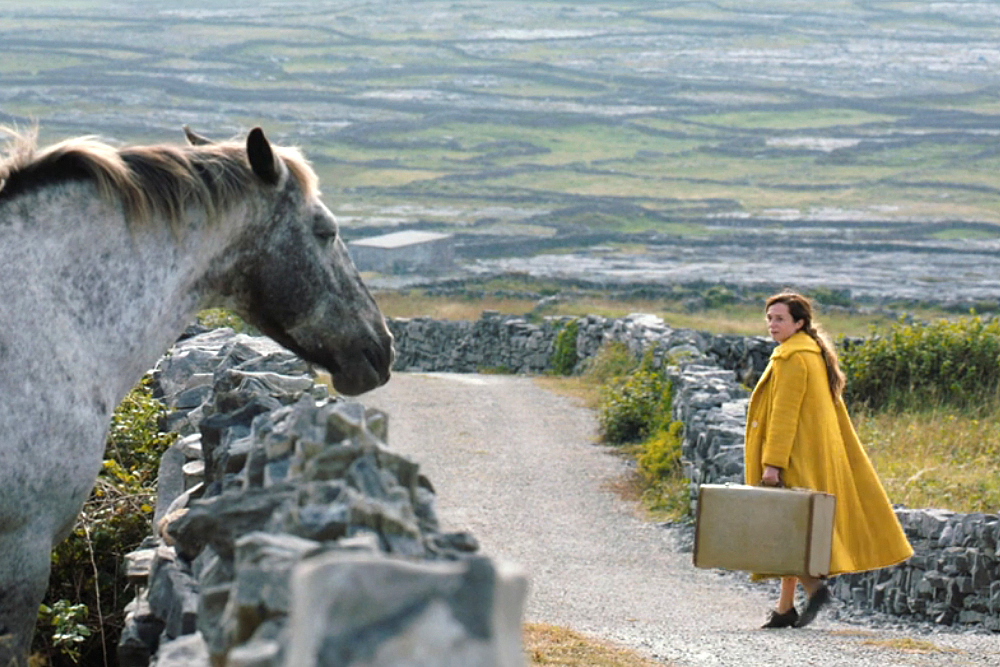 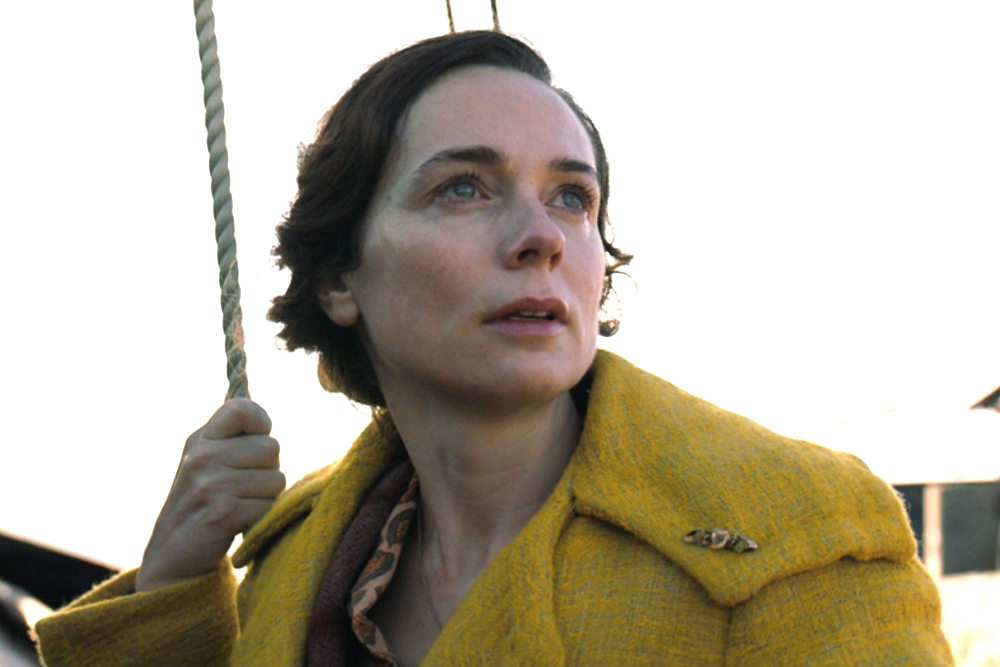 We can tell a movie costume has really done its job when just looking at pictures of it brings up the same emotional responses we felt when we watched the film. In The Banshees of Inisherin, Kerry Condon plays Siobhán Súilleabháin, the perpetually exasperated sister of the happy-go-lucky but incurious Pádraic, played by Colin Farrell. Set on the Aran Islands in 1923, the film doesn’t exactly provide its characters with the opportunity to express themselves through fashion and color. But when Siobhán makes the decision to leave the island and pursue a life for herself outside of the petty grievances and small-mindedness of her village, she dons this stunning yellow coat, which not only underlines her own sense of hope for the future, but serves as a sad beacon for Pádraic as he stands on the cliff and watches the one literal bright spot in his life sail over the horizon; a sun setting on his formerly happy and care-free life.

Michelle Yeoh, EVERYTHING EVERYWHERE ALL AT ONCE 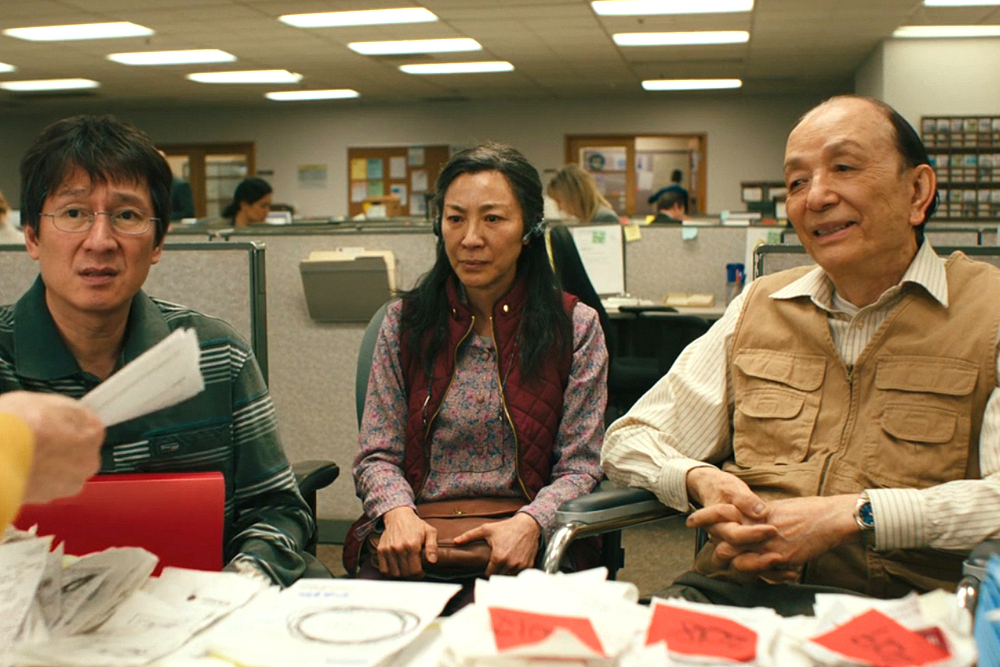 There is no shortage of eye-popping costume design in Everything Everywhere All At Once as protagonist Evelyn Wang (Michelle Yeoh) cycles through various versions of herself through the multiverse, many with lives far more exciting and interesting than the laundromat owner’s. But this costume is not only the one in which Evelyn is introduced to us, it’s also the one she wears through most of the film, which allows it to change its tone depending on the scene and the setting. Costume designer Shirley Kurata looked to Chinatown for Evelyn’s costumes – literally and figuratively. The costume was inspired by the kinds of things middle-aged and older Chinese-American women tend to wear in their communities and the pieces were all sourced from actual Chinatown boutiques. As two people who live mere blocks from our city’s Chinatown, we can’t even begin to count the number of times we’ve seen nearly exact versions of this outfit walking the street. It reeks of practicality, from the comfortable sneakers to the stretch pants to the multiple pockets and the layering, but also speaks of someone who still wants something pretty in her life; some way to express that underneath all the brusqueness and the weight of so many responsibilities, there’s a lady who just wants to match her vest to her shoes, her shirt to her pants, and sport a few flowers in her life. She wants to look pretty while she gets shit done. Who can’t relate to that a little? As humble and prosaic as this costume is, it speaks of someone who never really stopped dreaming of a different life. In director Todd Field’s Tár, Cate Blanchett plays the title character Lydia Tár, an EGOT-winning musical conductor and composer whose life and career slowly unravel when retribution comes for her years of personal and professional misconduct. Costume designer Bina Daigeler clothed the character in the kinds of masculine-coded power-lesbian styles favored by queer over-achievers like Annie Leibovitz. These have the effect of making Lydia seem not only real, but familiar. Additionally, the style tends to underline the behavior which resulted in her professional downfall, a series of sexual harassment charges, the likes of which have brought down or vexed many powerful men over the last few years. In this scene, her masculine-coded behavior is made fully textual, she Lydia confronts a little girl at her daughter’s school, introduces herself as her daughter’s father, and makes a serious and disturbing threat to the child. Oversized costumes have two different effects, depending on the performance and the script: they can either make the wearer look small and overwhelmed or they can make them seem larger and more imposing. As Lydia saunters away in her big dark suit, she is an unmistakably sinister and imposing figure. We tried to avoid picking two costumes from the same film for this list, but Steven Yeun’s cowboy suit from Nope came in at the last second, because we simply couldn’t ignore how eye-catching and ultimately how sad this costume actually is. Yeun plays Ricky “Jupe” Park, a former TV child star who witnessed a horrifying on-set incident that resulted in the deaths and maiming of his co-stars. Despite this trauma (or more likely, because of it) Jupe spends his life trying to recapture the acclaim and attention he received as a child while maintaining a shrine to the event that almost killed him. As the owner-operator of a western-themed tourist attraction, he tries to tame the wild extraterrestrial creature in the skies above his ranch and make it another attraction to draw people toward him. There’s a deviousness and also a deep sadness imbued in this costume. An Asian-American man dressed in the most “Western” of American costumes, trying desperately to hold on to some form of fame while taming the untameable. A white hat who’s really a black hat at heart. Note how the applique on the suit references a spaceship and the “flowers” are actually representations of the alien life form itself. He knew what he had, knew what it was capable of, and pursued it anyway, trying to dress up its horror in hokey cliches.