We wish we could say we’re loving She-Hulk, but despite the star power and talents of Tatiana Maslany and Jameela Jamil, among others, we find the whole focus on frivolities like dating apps and beauty influencers to be a little cringey, not least because they result in such cliched observations as “dating is hard” and “being a woman is infuriating.” We think there’s plenty of room in the MCU for a light, sitcom-y, woman-centered take on the superhero, and the casting is on point for it, but the scripts have been increasingly disappointing. Everyone is forced to act in a really broad, sitcom way (without a laugh track) and none of the episodes really go anywhere. You just spend 24 or so minutes with blandly likeable characters trading quips and then there’s a ten-minute closing credit sequence. And from a nerd’s perspective, it seems to miss the entire point of Jennifer Walters’ character, which is that she loves being She-Hulk and tends to spend most of her time happily inhabiting her indestructible form. You could do so much with that, but it would require way more money in the effects budget than Disney’s willing to put out, evidently. It doesn’t even do all that much with the superhero attorney angle, since most of her cases have been goofy and low-stakes. It all feels like one of Marvel’s biggest missed opportunities. There. That’s our micro-review. Slap it up on Rotten Tomatoes.

The good news for all of us is that when you cast Jameela Jamil in a project, girlfriend is gonna strap on some fashion and hit the promo circuit harder and louder than anyone else involved. She’s been making the morning show rounds and in typical Jameela fashion, she’s not coming quietly.

AT GOOD MORNING AMERICA in MILKWHITE Those will forever be Carrie Bradshaw’s wedding shoes, which makes them a pretty focus-pulling choice for an outfit that’s already doing a lot to gain your attention. The dress is cute, but we’d like it a lot more without the feathers. We have no doubt, however, that she wouldn’t. Believe it or not, she wore something much more focus-pulling on the show: 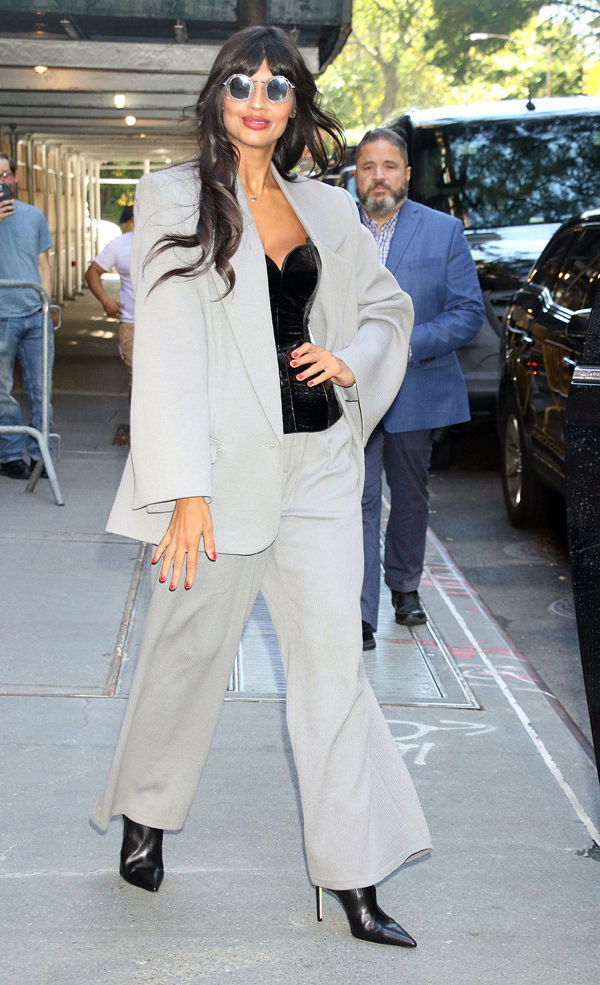 These are her walking-out pics, so this is what she wore on set. We really love it. It’s got that sort of aggressiveness to it that a lot of her style has, but it doesn’t threaten to veer into Clown Town, where so much of her fashion winds up. It also tends to make her look quite formidable, which is a good way to promote a show like She-Hulk. We question the choice of shades (there are much cooler, chicer options), but everything else looks perfect to us.