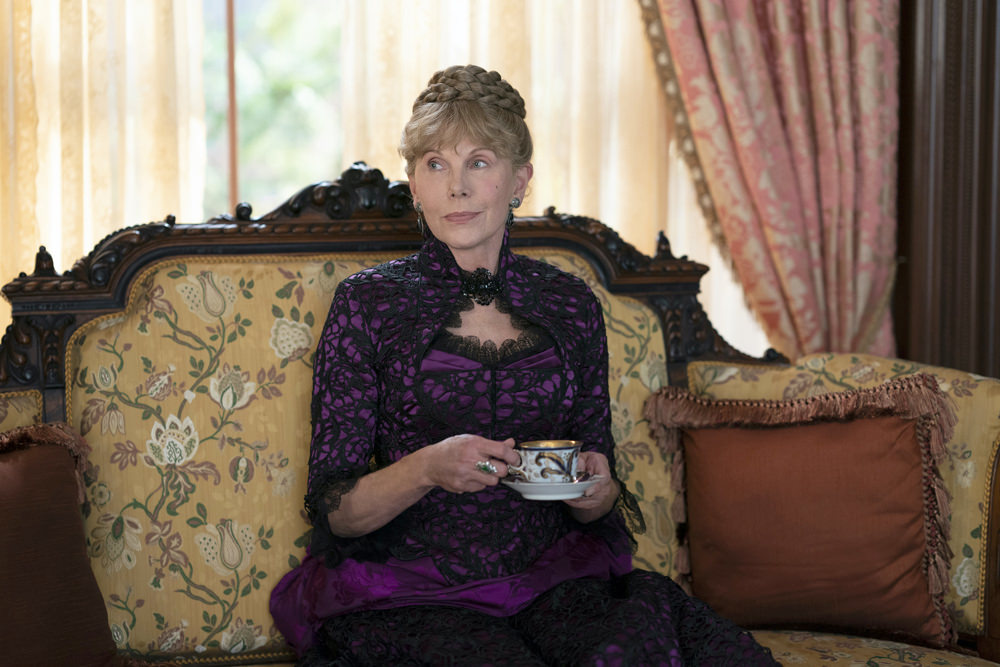 Let’s chat a little bit about the costumes in the first episode of The Gilded Age, shall we? What? You thought we were just going to do a pre-air review of the series and leave it at that? Silly, kittens. There are themes unfolding here and we simply must pay attention to them. Granted, as much as we enjoyed the first five episodes sent out to reviewers and critics, we are more than aware that in many ways, The Gilded Age has the depth of a puddle. When we say there are themes to explore, we’re overstating things ever so slightly. Even so, costume designer Kasia Walicka-Maimone took the rather thin premise of the show (not to mention Julian Fellowes own rather archaic ideas about the classes) and used them to build a costume wardrobe that tells the tale, not of class distinctions so much as background. Most of the characters except the servants are either wealthy or travel in wealthy circles. This isn’t a story of the classes clashing, it’s a story of the Old vs. the New. It’s not about class, it’s about taste. To perhaps no one’s surprise (no one who didn’t watch every episode and one movie of Downton Abbey), the old is rendered as the more tasteful and appropriate world in which to exist, of course. Let’s start with Agnes Van Rhijn, the stern but practical old money doyenne played by Christine Baranski. Look at how well her clothing situates her in her surroundings, making her pretty much as one with the decor. You might think this is because she owns all of it, but even her sister Ada looks as much decor as person when she’s in the same room: 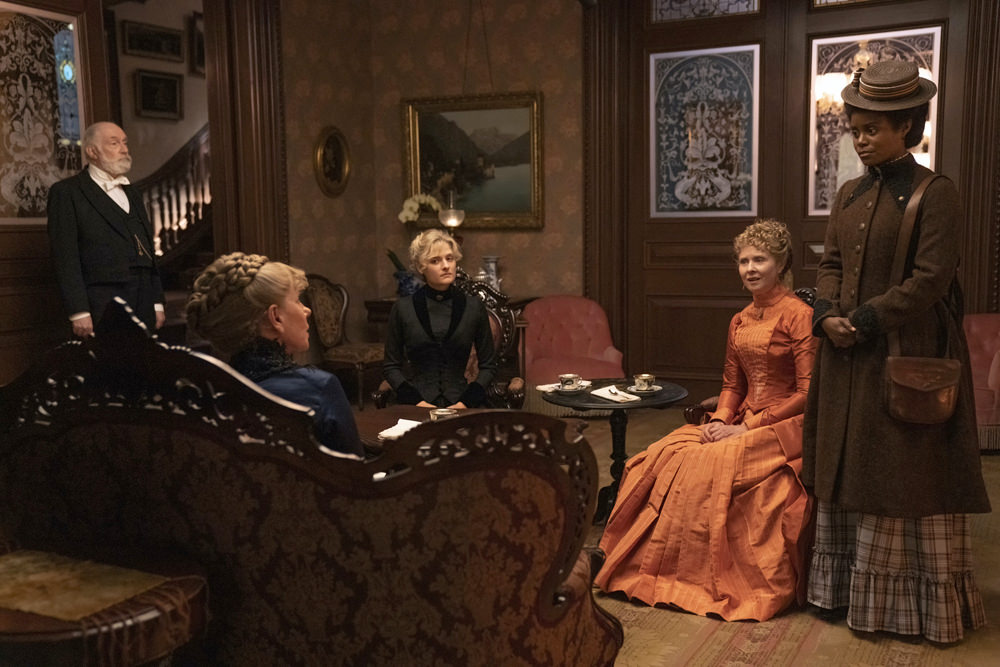 The clothes worn by Agnes and Ada are clearly extremely well made using high quality textiles. They speak of their richness without being remotely showy about it. It’s an “If you know, you know” sort of thing. Their kind, which is well represented in this story, know good tailoring and craftsmanship so well that they could almost certainly name the dressmaker or atelier that supplied the dress just by looking at it. 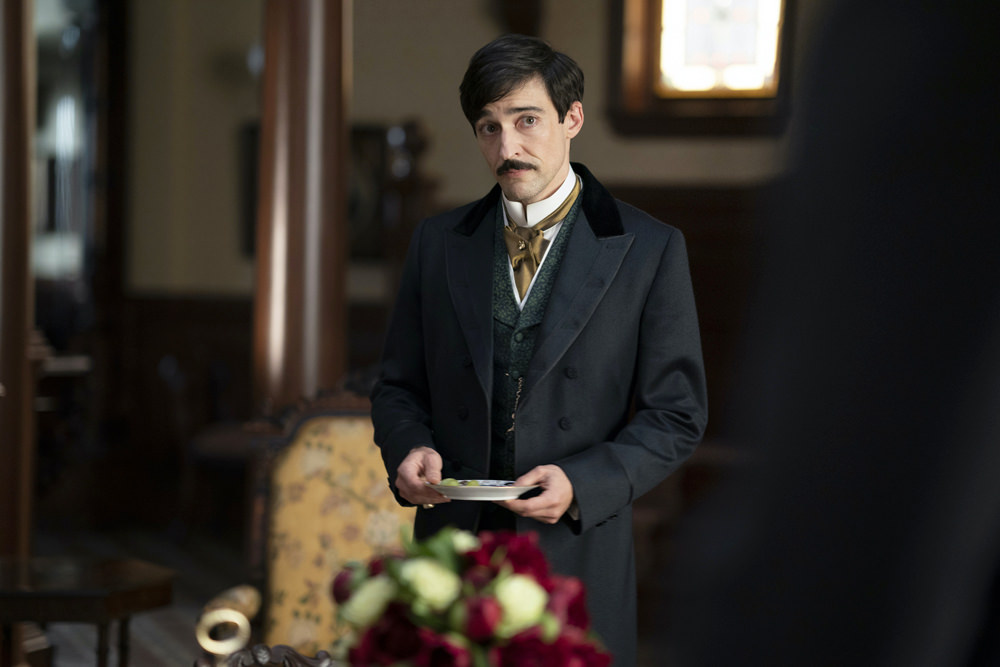 Even Agnes’ son Oscar is tied to the household through the use of color. Note the subtle richness and deep color of the vest. This sort of unified color scheme/match to the surroundings quality gives a sense of coordination, but more importantly it plays into Victorian old money ideas about taste and restraint. 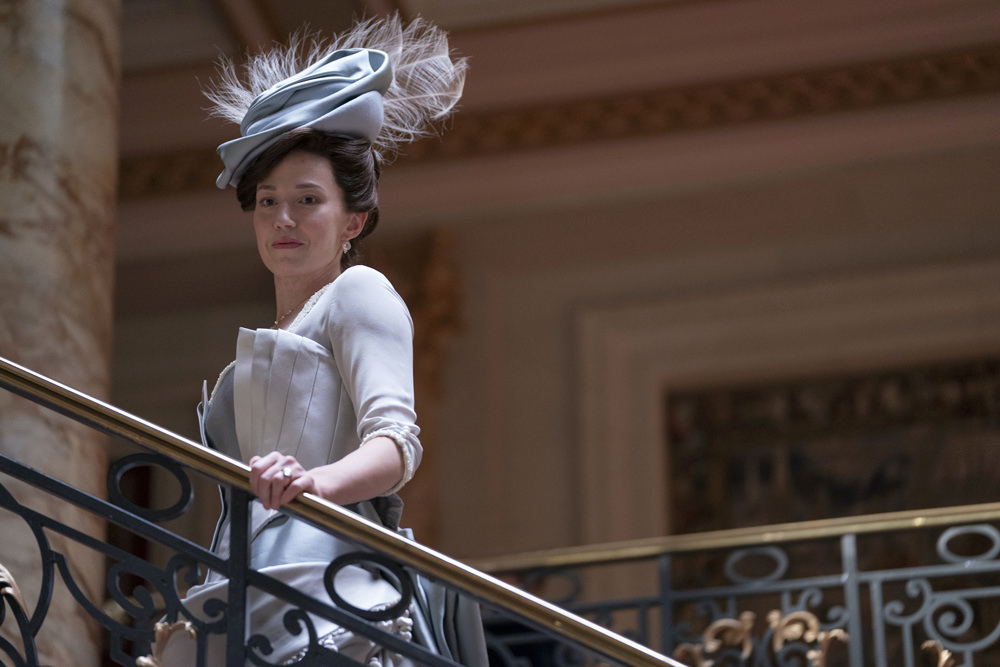 By contrast, Bertha Russell’s wardrobe is expensive-looking, showy, and in a lot of ways, tacky as hell for the time period. She makes the cardinal sin of wearing her wealth on her sleeve – quite literally. Victorian clothing – especially for the wealthy – could be a lot more colorful and wild than you might think and there was a fairly wide range of style options open to women so long as they stayed within the boundaries of propriety in terms of silhouette and coverage. In other words, once you put the corset and bustle on, there were lots of embellishments, textiles and other elements to play with and women of means sometimes went as wild as they could within those restrictions. But the old money classes had distinct ideas about restraint and propriety and Mrs. Russell and her daughter Gladys are clearly costumed to sit outside those ideas in every scene. Think of Agnes, Ada and the other Old Money characters as doyennes in classic Chanel while the Russell women keep showing up at events in Balmain. In the eyes of Agnes Van Rhijn, they’re the Kardashians. Bertha’s clothes are boldly colored, shiny, and with wild flounces or flares coming off them in all directions. Gladys’ clothes are almost absurdly twee, meant to provide her an old world aristocratic air, but coming off rather silly-looking in comparison to any of her contemporaries. You could say the same about the mysterious Mrs. Chamberlain, who’s persona non grata amongst the moneyed ladies and wears the kind of over-the-top designs that her society peers would consider almost vulgar in their showiness. But perhaps it’s not entirely fair to compare these clothes with those of maiden aunts and widows. Even high society, old money women partied and had some leeway to go a little wild in ways that certainly look tacky by today’s standards. 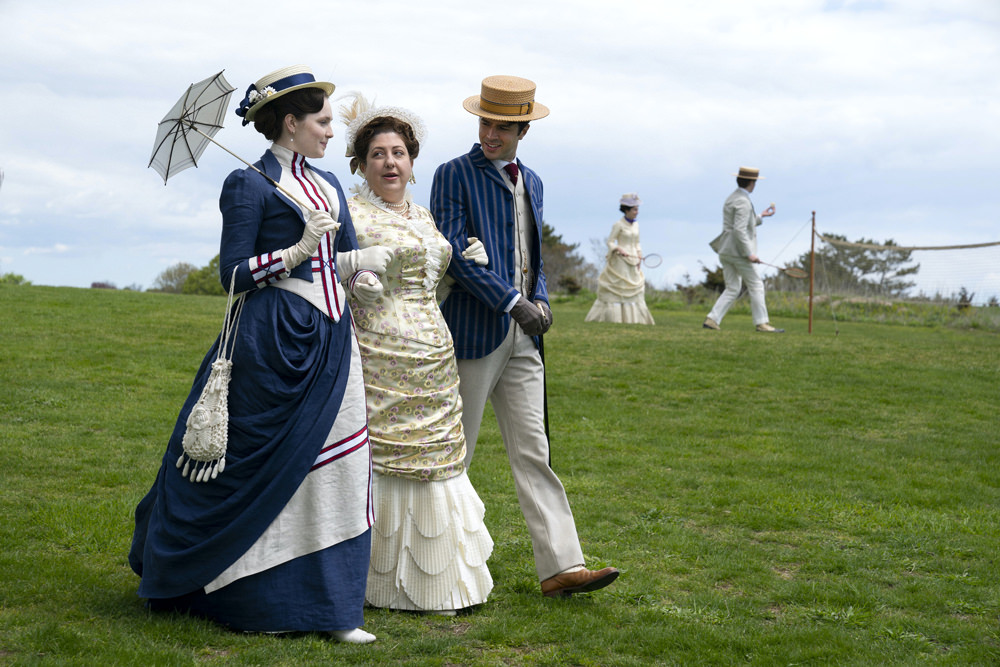 The Russell’s son Larry was in Newport with legendary society hostess/party girl Mamie Fish, whose own style could hardly be considered restrained. In fact, of the entire Russell family, he seems to be the only one who moves in these circles somewhat effortlessly. Look at how well he matches Caroline Astor here. Granted, it was much, much easier for New Money men to look the part within the even narrower restrictions of Victorian gentlemen’s clothing. Once again, his sister Gladys looks absurdly over decorated and out of place. Poor relation to Agnes and Ada Marion Brooke, on the other hand, tends to straddle both worlds somewhat easily. She has the old money blood that is meant to convey a certain innate level of taste and comportment, but relies on her aunts for her dresses. We can’t help thinking that this gown, which she wore to sneak out of the house and go to the Russells’ party, has such a distinct Disney Cinderella vibe that we find it hard to believe it’s not on purpose. The hair, choker, neckline, sleeve style, gloves and silhouette are all a near-perfect match. If it wasn’t on purpose, it’s a pretty hilarious coincidence. We’d argue, however, that Marion’s taste isn’t what her aunts would call impeccable. The dresses she had made with her aunts’ money are youthful and much more modern than her aunts’ styles, without being quite so tacky as Gladys or Bertha Russell. We get the sense from her clothes that she has some taste, but not the kind of instincts her aunts would like to drill into her. The funeral outfit she wore when leaving Pennsylvania would seem to give a little indication of what her style was like before her aunts started throwing money at her. This is more restrained than her New York wardrobe and speaks of the kind of sturdy, well-made, meant-to-last clothes a young middle-class woman might have. It’s also interesting to look at Peggy’s ensemble here. While her background and story are still a little hazy, we think it says something about her practicality, not to mention the reality of traveling as a Black woman in an America only two decades past the Civil War. Like Marion’s her traveling ensemble is sturdy and well made, but it’s not of particularly high quality or stylish for the time. We wonder what she was doing in Pennsylvania, because one thing became perfectly clear when she went to visit her mother: 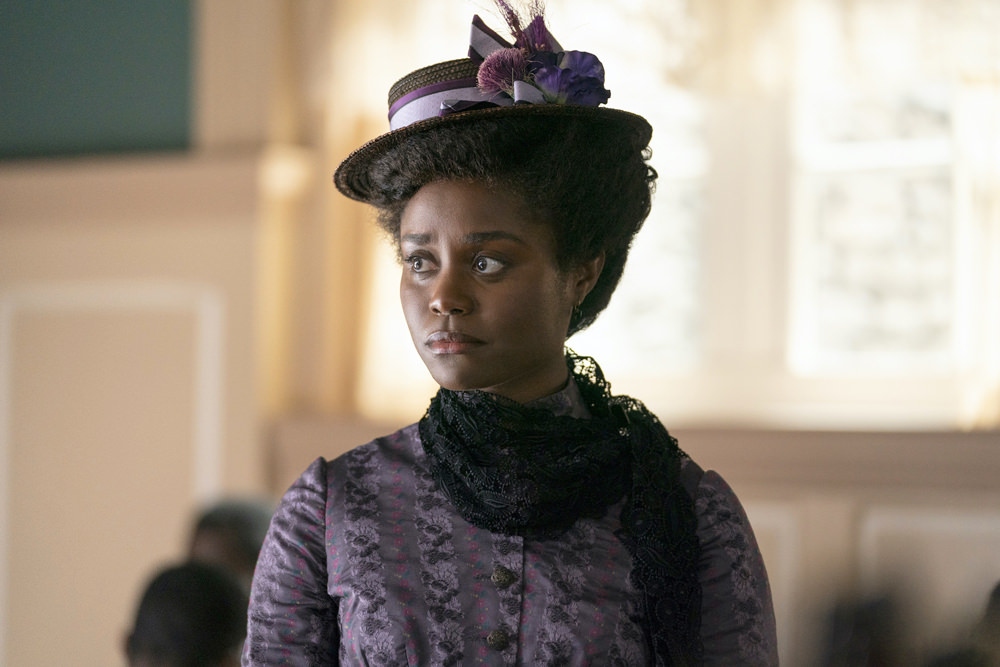 She not only came from a family with money, but she already possesses some pretty fine clothing. Her rather humble traveling ensemble interests us for that reason alone. Just look at the richness of these textiles and embellishments. Look at the buttons on her mother’s jacket. It will be interesting to track her story side by side with Marion’s; both of them come from what their own people would call good bloodlines and they each seem to want to avoid the lifestyle expected of them. But Peggy puts her fine clothing aside and nearly cuts off her family in order to establish a career for herself while Marion is embracing a high-society lifestyle paid for entirely by her family. As we always say, it’s all there in the costumes. No, really. We say it all the time.