Home » Television » “The Gilded Age” is “American Downton Abbey” with... 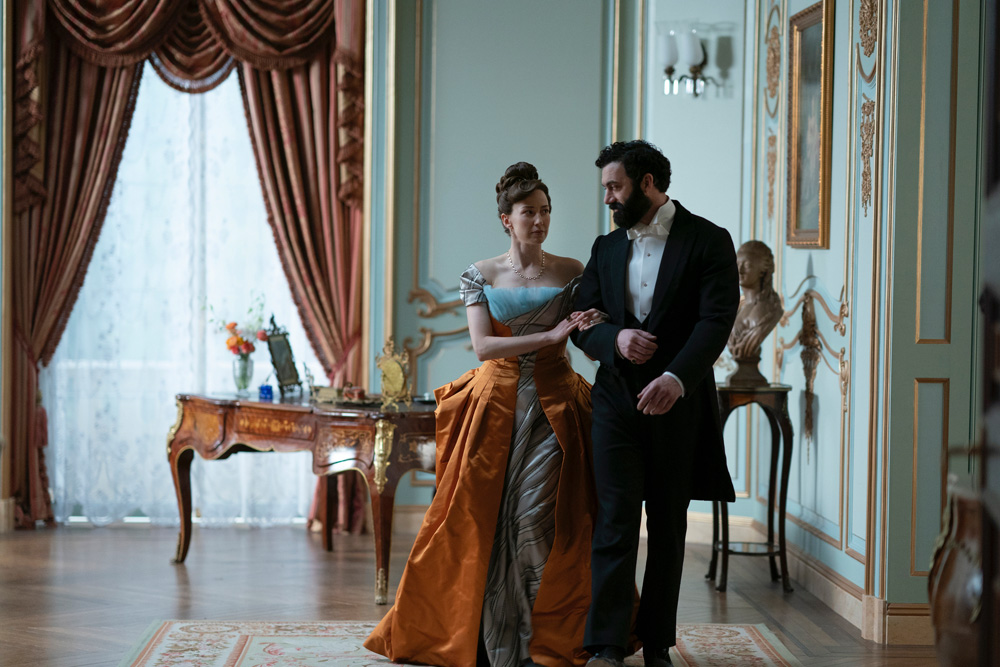 We just packed away our commemorative Downton Abbey Christmas ornament a couple of weeks ago. A massive, heavy globe containing a miniature of the titular estate, it always hangs from the lowest branches of our tree because they’re the only ones that can support its weight. It was a gift from PBS after having spent five seasons as part of their Downton live-tweeting team and in thanks for our coverage of the show from Day One; a big, borderline tacky item we never would have purchased for ourselves but nonetheless delights us every time we see it. Back during the height of Downton Abbey‘s popularity, a common point of bemusement for some British culture writers was the American response to it, which was fairly rapturous, making it one of the biggest hits in the history of PBS’ Masterpiece brand of programming. To be fair, we can sort of understand where they’re coming from. Why would a country that prides itself (to often absurd lengths) on its overthrow of British aristocratic rule and rejection of old world class distinctions be so over-the-top about a show utterly devoted to romanticizing that class and a way of life the British themselves largely abandoned in the last century? Having covered the style choices of the Duchesses Cambridge and Sussex over a period of a decade-plus, we’re well aware that there’s a certain Anglophile obsession with the tiara set in America, which might explain some of the appeal for some of the viewers. But when you get right down to it, the mass appeal of Downton Abbey stateside had less to do with romanticizing the aristocracy and way more to do with ogling the trappings of it. In other words, it’s about the money. It’s always been about the money. There is no obsession more American than that. No one understood that better than Downton creator Julian Fellowes.

Now, nearly a decade after its announcement, having changed networks and gone through major cast shuffles, his new series The Gilded Age is about to premiere on HBO Max. Switching out his focus from the British aristocracy of the early 20th Century to the American bankers and industrialists of the late 19th, Fellowes is likely to see his series dubbed no more than an “American Downton Abbey” by its detractors. What they don’t understand is that Fellowes will consider that classification a triumph on his part. He knows the Downton fandom and what they want. He’s banked his latter career on it and he delivers exactly what they would expect from him. The Gilded Age is quite deliberately and obviously American Downton Abbey from the foundations to the turrets. You need only look at the elaborate title sequence for this series, unveiled in the second episode, to see how well Fellowes knows his audience. It’s a several minute sequence that displays more marble, gold, and precious jewels than the Vatican. We, possessors of a Downton Abbey Christmas ornament, clapped in delight at the base vulgarity of it all. Sorry not-sorry, but that’s always been a major part of the lure of Fellowes’ more popular works. This is all something of a lengthy preamble to the main point of this review: Fellowes doesn’t just lift themes and motifs and styles from his earlier series, he recreates characters, plotlines and settings as well. You will not be encountering anything new or original in this series, nor should you be expecting an Edith Wharton-like dissection of archaic social norms and practices of New York society in the 1880s. It’s all gowns and jewels and ballrooms, imperious dowagers and plucky young women with ambitions, scheming ladies maids and mysterious valets, handsome suitors and rakish, closeted gay men, heiresses and poor relations, maiden aunts and overbearing mothers who just want to make sure their daughters marry well. It’s all of that without having to, you know, like, read any of three dozen pieces of classic literature dealing with the same topics and themes. It’s the Cliff Notes version of Masterpiece Theater or a Merchant/Ivory film. At one point, a character snorts in disbelief at the revelation of a character’s hidden motivations, “The vengeful ladies maid. Sounds like a character in a melodrama.” Fellowes knows how cheap and cliched his writing can get. He knows there’s not a drop of originality to be found in it. And he will laughingly point it out to you, right in the dialogue.

So yes, it’s all soap opera plots you’ve seen before played out by character types you’ve seen before, using narrative tropes you’ve seen before. But it’s gorgeously sumptuous, deliciously addictive, and well-acted across the board. Carrie Coon and Morgan Spector are the power couple at the center of the story, a pair of uber-wealthy arrivistes, building the biggest mansion uptown, wearing the finest clothes, and upsetting the social order of the Mayflower Set, represented here (when people like Mary Astor don’t wander through a scene) by Christine Baranski as an old money widow with a tongue as sharp as the Dowager Countess of Grantham herself. We won’t reveal more than that, but trust: there aren’t really any surprising plotlines here. You may gasp a little when the gay liaison reveals itself or you might raise an eyebrow when one of the main characters does something so condescendingly racist you’ll want to turn into human cringe at the sight of it, but for the most part, it’s going to be stories about social climbers and social schemers, rising young men and fallen women, servants with schemes and millionaires with vendettas. 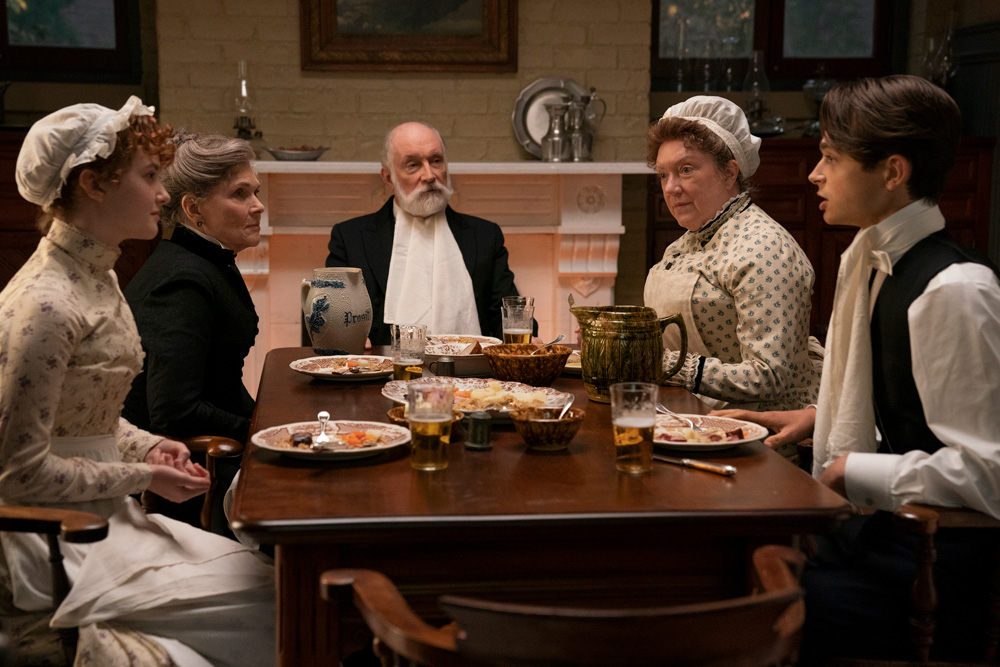 To Fellowes’ credit, he does a fairly good job of tweaking the story for an American setting, encompassing the themes of racism, class, and provincialism that dominate American social history. He’s avoided the trap of trying to transpose a literal European-style aristocracy onto a self-appointed American one that had its own New World distinctions. If there’s one true difference between The Gilded Age and Downton Abbey (aside from all of the differences that naturally occur when you go from a rural setting to an urban one), it’s that, in possible deference to his American audience and the network on which it’s appearing, there’s a lot more scheming in this one, with characters plotting the ruin and downfall of each other – and in one case at least, pulling it off to horrifying effect. There’s also more sex, although except for one slightly goofy moment of a ladies maid getting a little ahead of herself, there’s no nudity. But Spector and Coon as super-schemers George and Bertha Russell practically sweat chemistry in their scenes together and unlike poor Thomas in Downton Abbey, the gays get to have a little more horizontal time onscreen. Guilty pleasure? Not on your life. The Gilded Age is as guilt-free as a piece of cake on your birthday – and roughly as nourishing. Enjoy it for what it is: a big, borderline tacky item you might never have purchased for yourself but nonetheless delights you every time you see it. And if it all gets to be too silly, just look at the gowns and the rooms and the staircases for a while.