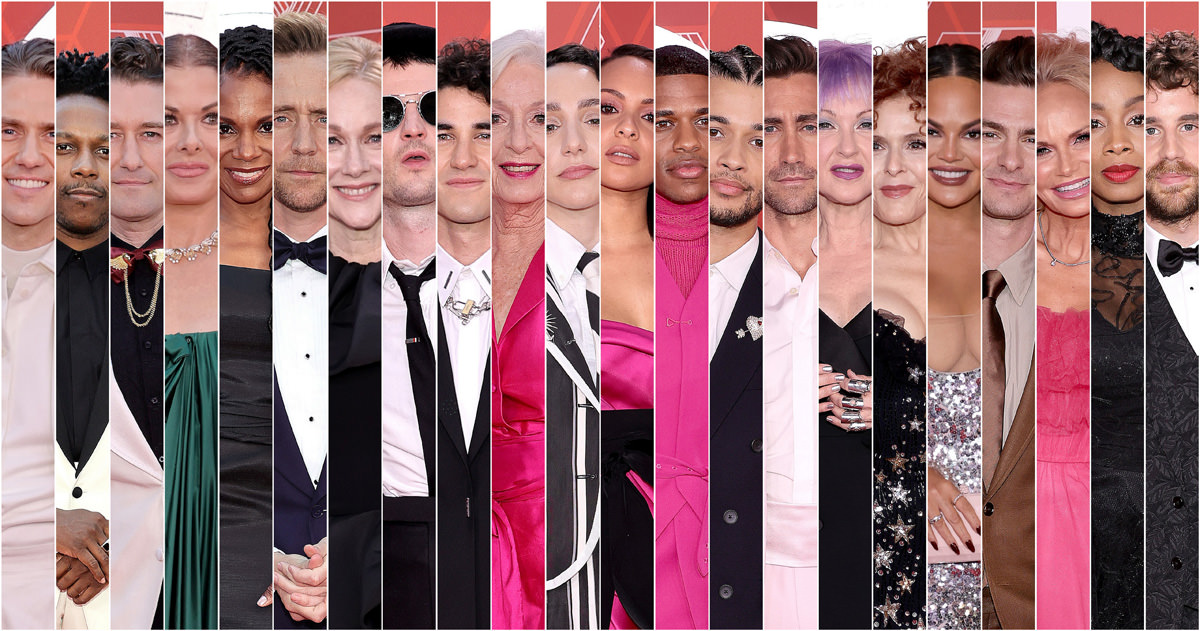 A grateful nation turned to the one thing they can always rely on to lift their spirits and distract them from the stresses of the world: theater folk giving it their all. This year’s Tony Awards felt especially heartfelt and celebratory (from the crowd that practically invented “heartfelt” and “celebratory”) in light of the deep hits the theater community took in the wake of the pandemic and the slow but steady reawakening of Broadway in a vaxxed world. But of course, we’re here to talk looks.

Aaron Tveit in The Row It’s very “The Row for Men.” We realize that’s stating the obvious, but of course Mary Kate and Ashley would design menswear that would be slouchy, loose-fitting and monochromatically neutral. We can’t say we love it (the whites don’t quite match, which bugs), but we respect him for dressing like an artist and not an accountant. Do we like the satin suit cuffs? No. Are we inclined to like an all-brown suit ensemble? Also no, but we have to admit it looks pretty great on him. It’s a gorgeous gown that incorporates more textiles and textures than we’d think any one dress could handle, but the classic style and lack of color help unify it. The hairstyle is perfectly matched to the dress and the earrings are gorgeous. The Tonys is a less showy, less trend-focused red carpet than every other major entertainment awards show, which means this classic gown is perfect for it. It’s New York theater, darling. You don’t do Hollywood here. The textile’s great, but we don’t know why he insists on that beard and hairstyle. They do nothing for him. He’s 27, for Pete’s sake. She is perhaps the only celebrity who follows us on social media that we’ll actually brag about. We realize it doesn’t mean anything, but we get a little tingle of excitement every time she pops up in our timeline. Anyway, this absolute legend has apparently had this gown since the 1980s and you are all required to bow down.

Chrissy Teigen (in Ulyana Sergeenko) and John Legend (in Gucci) WHAT IS NOT TO LOVE HERE? It’s interesting how it feels like the men are taking more risks here than the women. Minor risks, to be sure, but those satin sleeves are a choice. We love men in jewelry but we were never big fans of jewelry going where a tie should be. We realize it takes commitment and engineering to sport a gown like this all night, but it still feels like something for drinks on the terrace at sundown rather than a red carpet. Just gorgeous, sexy chic. It takes a certain kind of man to pull off a tieless tux with a cummerbund, let alone one rendered all in soft pink. Haven’t seen a Marchesa on the red carpet in a good while. Again: it’s that classic elegance that the Tonys tends to call for. If it didn’t look so great on her, we might have called the gown a little too prom. And now for a completely different pink men’s suit. This is sort of in the same style realm as Dan Levy’s Emmy’s Valentino, but we think this version works better; partially because the proportions are more balanced and partially because he well suited to the style. Those sleeves bug the hell out of us, though. Basic but cute. Love the brooch. This is like the epitome of a Kristin Chenoweth red carpet look: a puffy pink dress and tacky shoes that don’t quite go with it. Bless her heart. If there’s anyone who can pull of a sort of haute Puritan Chic on the red carpet, it’s her. In other words, we don’t like the design but we can’t deny it’s perfect for her. What can we say? We have a thing for elegant ladies in high-end witch costumes. We love every single thing about this insanely chic look except the hanging threads, which really bug. This is actually toned down for him, but he looks great. We’re really taken with how fantastic that color looks on her. Hahahaha good lord, no. How on earth did anyone figure out a way to make a bow tie look more douchey?

Sienna Miller (in Dior) and Tom Sturridge (in Thom Browne) Speaking of looking a little douchey… we almost hate to admit how great the suit and hat look on him. This is going to sound very backhanded but we think one of the reasons Anna Wintour was always so taken with Sienna Miller is that she has a model’s knack for making plain and classic dresses like this one look more chic than they are. And finally, Mr. Classic in a classic look. Can’t really argue with the results, can we?