Home » Movies » One Iconic Look: Whitney Houston’s “Queen of the...

One Iconic Look: Whitney Houston’s “Queen of the Night” Costume in “The Bodyguard” (1992) When you talk about Whitney Houston’s movie debut as pop superstar Rachel Marron in 1992’s The Bodyguard – especially if you’re speaking in terms of long-lasting cultural impact – the conversation will turn, 99.99% of the time, to the pop culture ground zero event that was “I Will Always Love You.” You simply couldn’t escape the song for an entire year and it has remained an easy-listening classic in the 28 years since Whitney made Dolly a much wealthier woman. But music criticism is not our bag round these parts, so if we’re talking about The Bodyguard then you can bet we’re only focused on one thing: the iconic costume worn by Whitney in the scene where she performs “Queen of the Night” in a nightclub, much to the titular bodyguard’s (Kevin Costner) disapproval. In truth, we had a little bit of a problem coming to this one. We always had it on our list for this series, and we recognize it as the iconic film costume it is, but there were two issues for us: the first is that Lorenzo hadn’t seen the film in 20 years and Tom hadn’t seen it at all. It turns out, for all its impact on the culture and its many fans, The Bodyguard, unlike all of the other films highlighted in this series, is … not a very good film. Don’t get mad, now! It’s a perfectly fine guilty pleasure and there’s no denying that Whitney looked stunning on camera and had the charisma of a movie star. Watching the film now, it tends to underscore the loss of what could have been a legendary film actress had things gone a little differently in her life. But it’s really not that great in terms of its story or film making techniques. The second issue is that we didn’t really think this was a particularly good costume design going into this post. Again, we recognized it for its impact and how memorable it is, but if you’d asked us to assess this look prior to this week, we’d have said what we always felt about it: that it was a very “mainstream movie” take on how pop stars dress for the stage. Whitney never dressed this way in her pop career and at first glance (and for many decades after) our take was that no one else in pop music in the early ’90s was dressing like this onstage. Speaking as people who were very into pop music for that decade, we recall thinking at the time that this was honestly kind of goofy-looking. But it’s also true that ’80s and early ’90s pop music and R&B stars like Madonna and Janet Jackson brought a more theatrical quality to their performing costumes, especially those worn for music videos. It’s true that this costume, like a lot of female performance looks of the time, played with fetish gear tropes and fantasy-based tropes with a very post-’80s techno tone to them. You can watch En Vogue’s “Free Your Mind” video from just a few months before this film’s release and see a bit of that fetish+tech aesthetic of the time. Madonna’s Sex book, in which her early dabblings with fetish gear would reach its full bloom of obsession, was published right around the time of the film’s release as well. The motifs in this costume were in the mix of pop music at the time, even if the costume itself comes off a little too much like something for a science fiction movie than a pop star’s stage. But it turns out that was deliberate. Put a pin in that. Let’s step back and take a look at what we’re talking about, since iconic costumes tend to blur in their details after decades of being considered iconic. She starts the scene in a floor-length hooded cloak, obscuring the details of the costume for an entire scene before she dramatically removes it on stage in a moment of defiance that underscores Rachel’s superstardom and her intense need to provide for her fans, even if it endangers her. Underneath is revealed a metallic bustier with belly cutouts, a metallic beaded yoke, a chain skirt, leggings, thigh-high leather boots, studded black gloves nearly the length of her arm, and a metallic head piece which miraculously appears on her head. 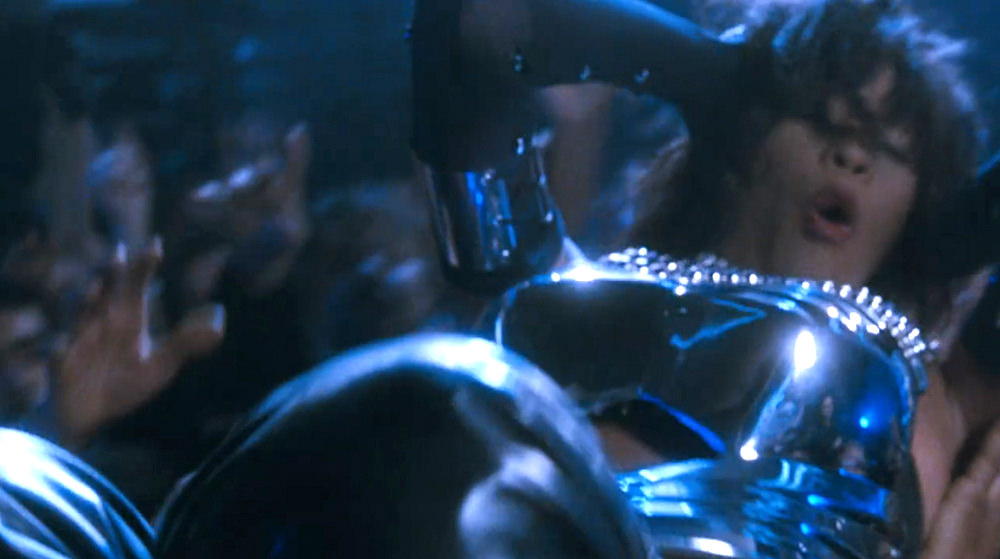 It’s a transitional costume, meaning it sees the character through several emotional changes. A costume like that tends to stretch a costume designer’s skills because it has to seem appropriate somehow to each of its wearer’s emotional shifts. In other words, it has to make sense when she’s defiant as well as when she’s scared. Rachel went from naive about the threat to her life to defiantly angry at the idea of imposing limitations on herself to scared and vulnerable when she lost control of the situation, which then alters the course of her relationship with her bodyguard, Frank and drives the rest of the plot going forward – all in this costume, which signaled such shifts by removing the cloak, putting on the headpiece and then having it torn off of her as the beads of her costume scatter on the floor. From a purely visual sense, the costume plays with these ideas of brave defiance and vulnerable fear, with elements both soft and hard, hidden and exposed, armored and so delicate as to start falling apart as soon as the mass of audience members lay hands on it. The cloak makes allusions to Little Red Riding hood or any of a number of fairy tale damsels in distress. The metal and leather costume alludes to Amazon warriors and transhumanistic sci-fi queens; appropriate for both the song and the nightclub setting, with its visual references to ancient-world architecture. From a storytelling perspective, it’s excellent work by costume designer Susan Nininger. What we didn’t realize was how the costume was pulling from a specific cinematic reference in order to make subtle points about Rachel’s character and the film’s idea of superstardom. The music video for “Queen of the Night” makes the reference a little more overt than the scene in the film:

Playing behind Rachel during the scene – and interspersed throughout the video – are shots from director Fritz Lang’s seminal 1927 German Expressionist film Metropolis. Among its many other notable qualities, it is the first film to depict a robot, the Maschinenmensch who appropriates the form of a woman named Maria:

And later performs a sensual dance for a group of leering men whose desire is visually reduced to a herd of unblinking eyes.

The fringed skirt, molded metal bodice, metallic headpiece, studs and armbands of Rachel’s stage costume suddenly make a whole lot of sense when you put them in the context of this scene and the larger story the film is telling. Like the robotic Maria, Rachel is such a superstar and so insulated from the considerations of “real” life that her performance is that of a simulacrum rather than a real woman; a transhuman figure of desire performing on stage and driving men insane. The film renders her stardom and the bubble she lives in as an enormous detriment to her safety and happiness. She’s a machine performing a pre-set series of movements and sounds, controlled and created by committee. 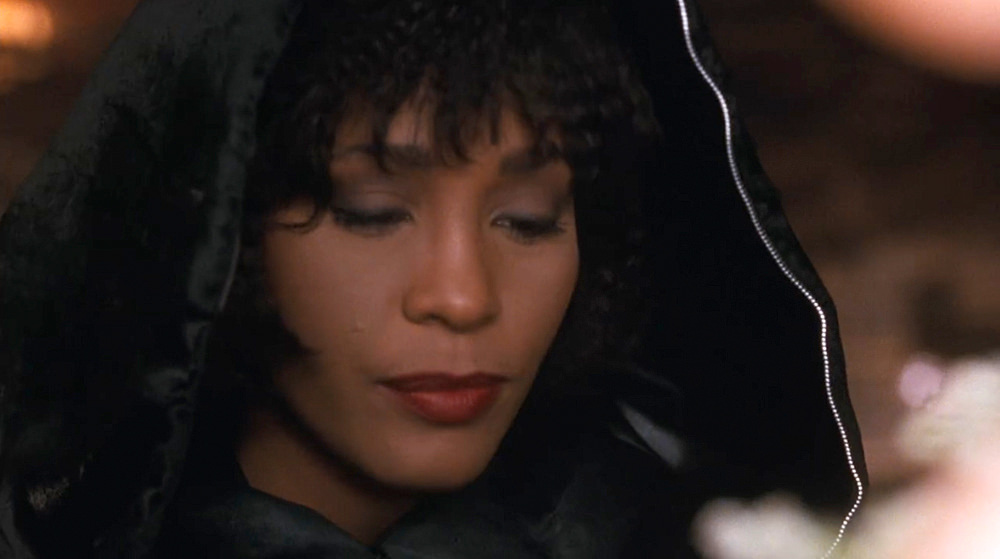 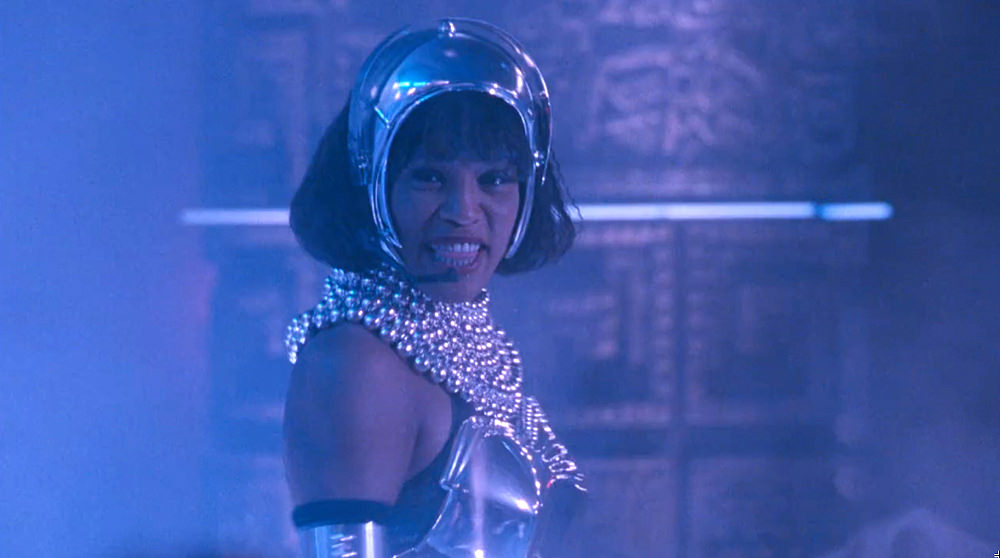 A fairy princess who turned into a robot who then turned into a real live girl when she found love. Soft and hard, armored and vulnerable, romantic and robotic – it’s all there in the design and how it’s used on film. So maybe it seemed a little goofy at first glance when compared to the stagewear conventions of the time, but it was a mistake for us to see it that way. This isn’t a stage costume. It’s a movie costume and unlike your average pop star’s getups, it had to tell you things about the story, about the character, and about the themes of the film. Despite our initial dismissal of it, it’s clear why this costume is so iconic. It got the job done so well that it’s become visual shorthand for the entire film in the decades since.