Clueless is celebrating its 25th anniversary this month, the revelation of which is no doubt (pun unintended) inspiring new and devastating visions of mortality for the Millennials and younger Gen Xers who just discovered that fact. What better time to relive your youth by taking a closer look at one of the most famous cinematic costume of the 1990s and the most famous schoolgirl plaid in movie history? On the occasion of the film’s 20th anniversary, we were asked to write a costume analysis of the entire film for the now-defunct Splinter, and we talked quite a bit about how plaid was both a consistent motif in Cher’s costumes as well as a consistent allusion to being a member of the “right” crowd. After all, the story (based on Jane Austen’s Emma) positions Cher as the very height of the high school social pecking order and when she and best friend Dionne opt to give the less-popular Tai a makeover, they put her in a succession of baby sweaters, thigh-highs and plaids. This is one of the many functions the costume serves in the film’s opening scenes; it suggests a style motif by serving the audience something so eye-popping and unforgettable that they will unconsciously register all the ways in which it recurs throughout the rest of the film. 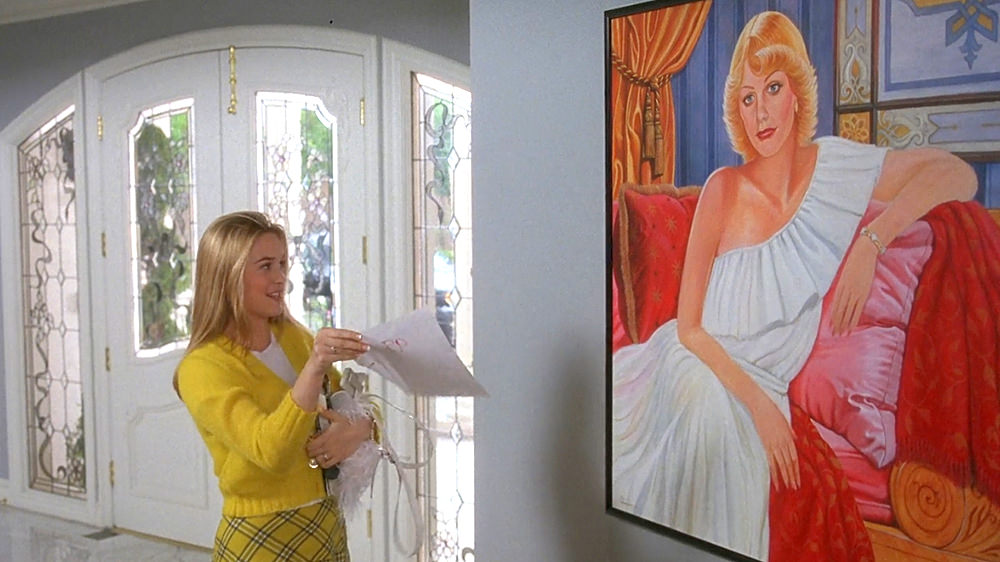 In fact, you could say that this ensemble, which follows Cher through a succession of introductory and expository scenes (in other words, the entire story, most of the characters, and all of the themes are established while Alicia Silverstone wears this costume), is the most important look of the film. History would certainly seem to indicate so, given how iconic this costume has become. In the quarter-century since its debut it’s become a perennial Halloween favorite and inspired countless homages in the world of fashion. Some version of this look seems to walk a runway once every couple of years, it seems. Despite the film’s poster, which doesn’t feature this costume, and the fact that several of its most quoted lines are references to different outfits (“You don’t understand, this is an Alaia!” and “Says who?” “Calvin Klein!”), this is the look most associated with Clueless. These are the pictures that accompany any profile of Alicia Silverstone’s career. Like Dorothy’s gingham pinafore and Judy Garland, this costume has been used to pretty much define Silverstone’s whole career. It’s not a coincidence that the overall style is prep school uniform-adjacent. First, it’s cinematic shorthand for “rich, snotty high school girl,” which means even if the audience is unaware of the film’s inspiration, Cher’s character is defined for them in visual shorthand. This film came out seven years after Heathers, and seemed in some ways to be a bit of a response to it. The opening plaid schoolgirl-style ensembles easily call to mind the costumes from that earlier film, which sets you up to think of Cher – and by extension, this film – in a certain way, which the film’s directtor Amy Heckerling spends the next 90 minutes upending or disproving. Cher’s snottiness doesn’t evolve into a bored, homicidal nihilism and the film doesn’t view high school as a blood-filled arena or teenagers as latent sociopaths. Instead, it skips lightly toward happy endings and humble lessons learned all around. There’s a lightness and brightness in the costume that does a good job of signaling the film’s overall approach to its subject.

It should also be noted that Alicia Silverstone became famous in a way that seems almost too 1990s to be real: her appearance (along with Liv Tyler) as a sexy schoolgirl gone bad in Aerosmith’s 1993 video for “Crazy.” The film’s costume designer Mona May was wisely tapping into the audience’s understanding of Silverstone (believe it or not, there was a time when heavy rotation on MTV could launch an actress’s career) by referencing the style of costume most associated with her up until that point. It’s not overt, especially since the yellow does such a good job of distracting you from the reference, but by adding a little crop top, thigh-highs, baby sweater and Mary Janes, she’s utilizing the exact same “Sexy Schoolgirl” tropes that made Silverstone a star in the first place. Going a little deeper, we can see that the baby sweater also serves to underscore Cher’s immaturity and naivete, which is reinforced by Silverstone’s gum-fiddling performance. But to us, the most interesting aspect of this look is not the costume itself… But how it was reflected back in someone else’s costume. We made this point when we did a costume analysis of this year’s latest remake of Austen’s classic, Emma. The film’s costume designer Alexandra Byrne paid homage to Cher’s iconic yellow by putting the lead character in a similarly vivid yellow which served a similar point: Emma – or in this case, Cher – is the sun around which all the other characters revolve. We wouldn’t, however, call Dionne the moon to Cher’s sun. Clueless’s costume designer Mona May has called Dionne’s nearly identical plaid suit a more sophisticated version of Cher’s, although we tend to think it’s more trendy than chic. The vinyl lapels and oh-so ’90s Dr. Seuss hat make Dionne’s look feel a bit more of its time, which may be one of the reasons why Cher’s supposedly less sophisticated yellow plaid is the one that keeps showing up in fashion and stagewear homages. It has a more classic feel to it. On the other hand, there’s one in-story reason to believe that Cher is, in fact, copying her more sophisticated friend. Outside the story, Mona May said in a video interview for the A.V. Club that Dionne’s ensemble was designed first and that it took them a while to come up with Cher’s yellow as a counterpoint to it. Inside the story, we never see Dionne’s outfit selection process nor do we ever get so much as a hint that Cher filled her in on what she’d be wearing ahead of time. We’re supposed to understand the wearing of nearly identical outfits in different colors — with the exact same details down to the baby sweaters and thigh-highs — to be merely an expression of their bond and similarity, right? Except Cher’s computer program picked out the rest of the outfit details once Cher selected the jacket and skirt. If you want to get super-nerdy and hardcore about it, the only possible explanation for Dionne showing up in an identical look (which never happens again during the course of the film, by the way), is that Cher’s computer-selected ensemble was based on Dionne’s. Sure, it’s possible that Cher had her computer style her outfit and then she called Dionne with the details, but a) it’s never shown, b) Dionne is not presented as the type who hangs on Cher’s every choice, and c) it’s notable that each girl criticized the other’s styling as soon as Dionne gets in Cher’s car, underlining that this is less a representation of their friendship and more an underlining of their rivalry. In other words, the most iconic film costume of the 1990s might well have been a case of a white girl ripping off a Black girl’s look and then criticizing her for styling it in a trendier way.