If we can’t have a real Met Gala to talk about this year, why not take a walk with us through a fake one with some of our favorite red carpet queens? The centerpiece of 2018 Ocean’s 8 was the big heist that took place in the middle of the Met Gala, as all the marks and thieves took their places modeling some of the most gorgeous fashion seen on the screen that year, thanks to the efforts of costume designer Sarah Edwards, who selected pieces ripped from the runways and ateliers of high fashion that also made for perfect cinematic costumes.

It’s a beautiful gown, of course. And the argument could be made that such an obnoxious piece of jewelry begs for an ensemble that will step back and let it shine. But if Anne Hathaway showed up at the real Met Gala in this, we know we’d sniff at it and call it a low-effort entry. Cape and necklace aside, it’s just a Barbie gown – and she’s capable of wearing so much more interesting fashion than this. But she’s not Anne Hathaway here, of course. She’s “Daphne Kluger,” a vapid (on the surface, at least) and shallow actress. From a costume design perspective, this is dead-on. From a Met Gala perspective, it’s so-so. This feels so right for HBC, but in reality, she probably wouldn’t go for something so bright and colorful and fussy. She likes her fashion a little edgier, with a bit more of a steampunk feel to it than this sort of fantasy couture. The dress on its own is a bit much for our tastes, but when you pair it with the glasses and the head piece, it’s extremely on point for the Met Gala. And it’s right for her character; a ditzy, fuzzy fashion designer.

This is an incredible look for her and if she were a different sort of person, we might say that she should take her real-world red carpet cues from this look. But as beautifully chic and elegant as she looks here, this really doesn’t look like Sarah Paulson’s version of high style. She likes to be louder, edgier and a little less old-school feminine than this. Still, it’s a fantastic gown. Doesn’t even look like Prada.

We’ll say it: She – and the audience – was robbed. Sorry, but Zac Posen is simply not the designer you put Rihanna in for the Met Gala. The lady has made too many jaw-dropping appearances on the real Met Gala red carpet to be stuck in this basic-ass dress. To be fair, she’s doing her best with it.

For story and character reasons, a Naeem Khan gown is a no-brainer here – especially one as gorgeously shimmering as this. We’re starting to think more stars should turn to costume designers for their red carpet choices because we’re trying to remember a time she looked this amazing out in the real world. Awkwafina herself doesn’t necessarily trade in this sort of old-school glamour red carpetry, but the color and style looks great, especially with her hair like that. In the real world, her fashion’s a bit edgier than this and if she actually showed up somewhere in this look, we’d wonder who talked her into it. 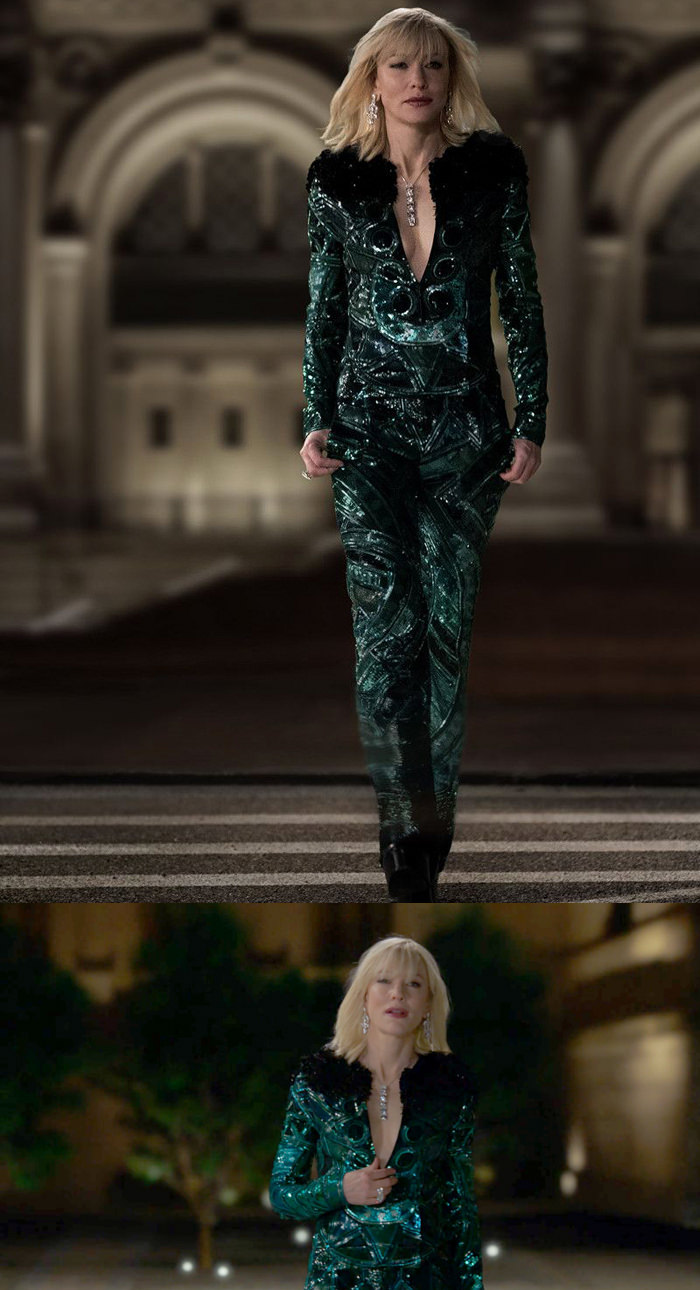 We always thought this jumpsuit had an effect on the real Cate’s style. She wore a lot of the same sorts of rocker-chick styles on the promo tour for this film and for some time after – and even up until recently – she’s returned to this sort of look more and more. She looks great here, but we’ve seen her do it better out in the real world. For a con artist in disguise, the gown really works to distract the eye and keep you from looking too closely. For all the drama, glitter and beading, it always felt a bit underwhelming to us – from a red carpet perspective. It’s just okay. Good enough for the Met Gala but not a stunner of a look, which is probably the point.