Met Gala 2019: Billy Porter Rides a Wave of Camp Right Up to the Front Door So, having kicked off our coverage with a look at Gaga’s efforts and an examination of whether it’s even possible for anyone to nail the them of camp at the Met Gala, here’s Billy Porter’s answer to the question of the night. Is this camp? 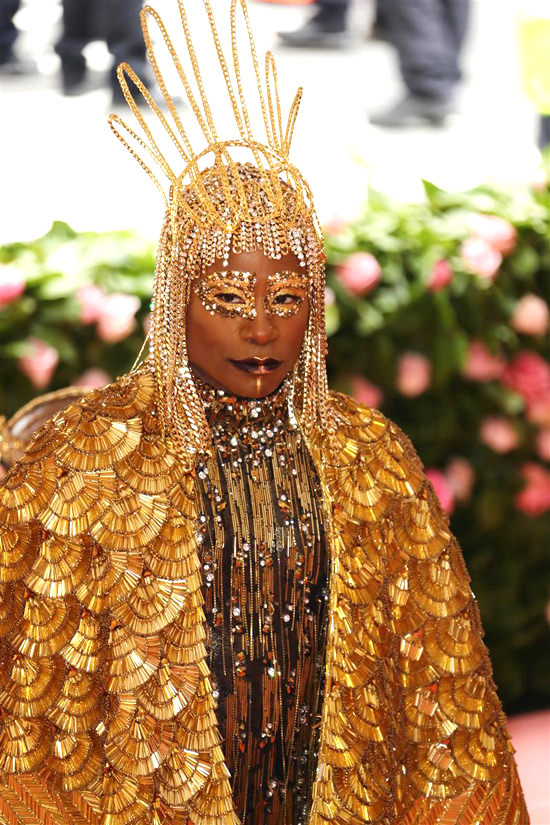 Oh honey, yes. This is as camp as a Met Gala red carpet can get. Not necessarily because of the glitter or the drag fabulousness. Not because of the makeup or the Egyptian theme. Those things helped, but anyone can utilize elements like those and think they’ve nailed it. In fact, plenty of the attendees clearly thought putting on some feathers or sequins met the theme, even though literally every Met Gala red carpet for the last 40 years has been stocked to the tent rafters with feathers and sequins. No, it was the shirtless attendants. It was the utter self-seriousness of the posing. It was the GODDAMN GOLDEN WINGS. If you’re not hearing Sylvester’s “You Make Me Feel (Mighty Real)” while cycling through these shots, then you’re not getting what Mr. Porter is laying down. The Blonds are one of the few design houses with a sense of camp built directly into their aesthetic and philosophy. Billy, with his connections to drag and the ball community in his work, not to mention his status as a black gay man, has a deeper, better understanding of camp than 99% of the attendees. This isn’t just a moment of incredible high fabulosity. It’s also a big, queer moment of black excellence, high drama, wit and humor.