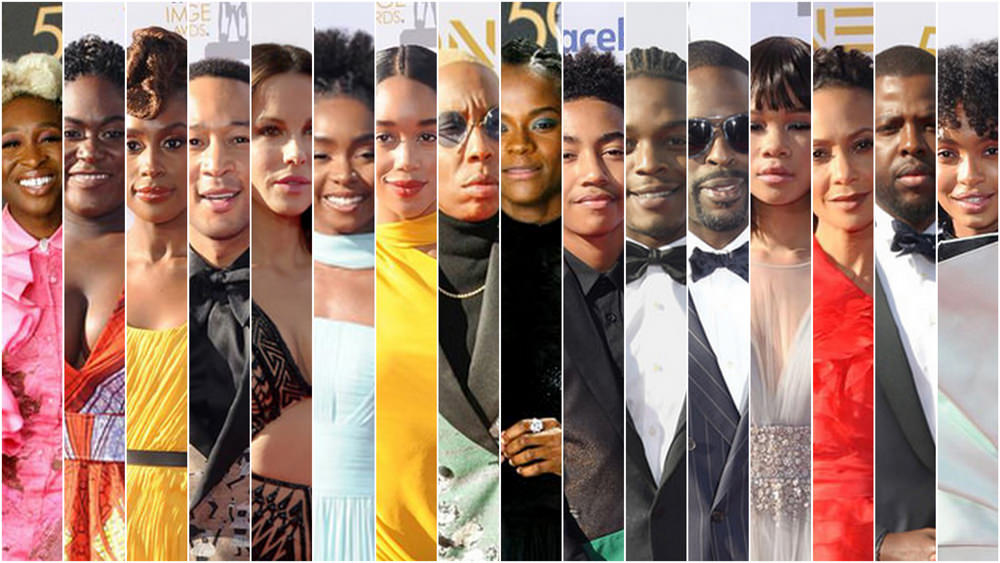 It was a bold, bright, colorful-as-hell night at the NAACP Image Awards, but we’ve gotta say, after years of covering this thing, that is no surprise at all. We finally figured out her style. She’s Lady Liberace. Looking at it from that perspective, her constant extra-ness is understandable and appropriate. Yes, we kinda like this nutty thing. Gorgeous print. Love the seaming, but the puffy sleeves were not needed with such a big skirt. Well, if it must be a sheer skirt, at least make it an elegant, barely sheer one. She looks gorgeous but we’ve always hated that style of twisty strap.

John Legend in A. Sauvage LOVE the print but that jacket is clearly too small on him. Well. This all appears to be in Beckinsale order. The design is fairly basic to the point of musty, but the color is stunning on her, the drape is lovely and you can’t argue with that hair. Kind of fabulous but we think we’d have liked a more complete skirt. There’s enough going on up top. Also: does the fabric look stiff or is it us? We can’t get behind the turtleneck, but the jacket is fierce. It looks like your party dress is smoldering, dear.

Aw, we’re being bitchy. Yes, it looks like a smokey dress, but we suppose that’s part of the appeal. Can’t say it’s not working. Your hair looks amazing and we kind of love the shoes, but those pants are entirely too small, sir. No complaints here. The shoes are a fun surprise. It’s pretty, but perhaps a tiny bit too grownup sophisticated. We always get in trouble when we say that. It’s fine, but that’s too much sleeve. Also no complaints. That dark gray color is subtle but works really well. Sure, maybe it’s a bit much and maybe she looks like a folded napkin in a fancy restaurant, but BEHOLD: A reveal! Because why limit yourself to one look per dress? She looks great.

Previous post:
2019 NAACP Image Awards: “Black Panther” Star Danai Gurira in Rosie Assoulin: IN or OUT? Next Post:
Amanda Seyfried, Justin Theroux and Emmy Rossum at Best Friends Benefit to Save Them All