In really good epic drama, there are kings and queens. Not in the literal sense (although sometimes), but in the character sense. What we mean by that is there are those few among the usually sizable cast who 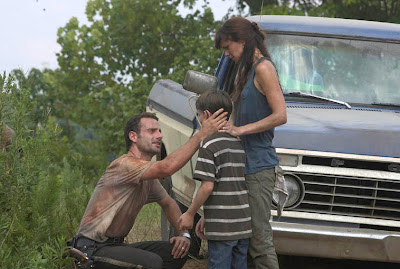 se interpersonal reactions and mostly private drama determine the larger fate of the group, just as a lousy royal marriage could determine the fates of nations, back in the day. Think of the kings and queens on a chessboard. Think of Jack, Kate, and Sawyer in Lost. Think of Rick, Lori, and Shane.

Lori and Shane had a brief affair while they both thought Rick was dead – and if that didn’t sound like something out of Soap Opera Digest – resulting in some intense and confusing feelings between the two of them; she is almost overwhelmed with guilt and he’s frustrated that he’s been shoved aside after protecting her (and is possibly in love with her). Both of them are buckling under the strain of keeping the secret and Rick is far too involved in going on his own hero’s journey to even notice.

In addition, because they’re both lawmen (and dressed like them, which is powerful in this 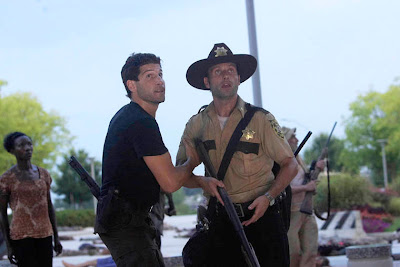 situation), the group has naturally deferred to Shane and Rick in most matters. Although the argument could be made that they had little choice, since Rick and Shane seem to have control of most of the weaponry in the group. To make matters even more volatile, Rick and Shane seem to have fundamental disagreements on every single issue facing the group, and fundamentally different leadership styles. Shane is driven mostly by desperation and fear. He wants to go to Fort Benning because ultimately, all he wants is to feel safe and to keep the group safe. Rick, on the other hand, is driven, like most heroes are, by something a little more noble: hope. To him, the CDC represents the hope that answers will be forthcoming and with them, solutions, and after that, a return to normalcy. Shane wants protection from the problem, and that’s absolutely understandable, but Rick wants to solve the problem.

Ultimately, it was their private drama that determined the group’s direction. Rick pleaded with Lori to side with him 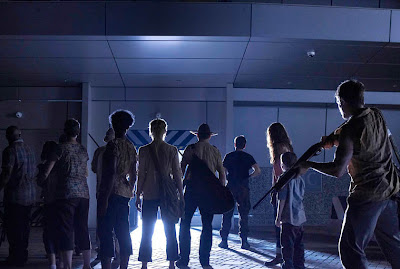 and at first, she seemed mostly unwilling to do so, only going so far as to admit that neither of them were wrong in their leadership styles; a response that could be read as diplomatic, noncommittal, or conflicted, depending on how you want to view Lori and her actions. When Shane angrily tries to confront her, she immediately shifts her response to one of unquestioning support for Rick, which drives Shane even crazier with anger (and fear), resulting in him literally placing Rick in his sights, momentarily toying with the idea of killing him. He gets caught by Dale, which only adds to his feelings of guilt, and, just like Lori did, switches his stance to full-blown support for Rick’s idea, and more or less endorses him as leader, convincing most of the group to go along with his idea. The fate of a dozen or so people decided by a love triangle.

The show took its time this episode saying goodbye to two characters, Amy and Jim, who barely got more than ten minutes of screen time between them. We’ll be honest and admit that we think a little too much time may have been taken on Andrea’s long goodbye to her sister, not to mention the funeral scene, and then the rather tortuously long decision to let Jim decide his own fate. To be perfectly blunt, it’s asking a lot for the audience to care about characters we’ve spent so little time with. It was a testament to both the writing and the 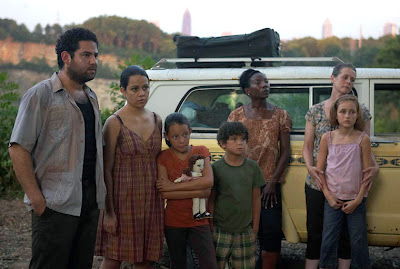 acting all around that we were invested at all. It may have annoyed us that Andrea was being so ridiculously careless around her sister’s body, but she just needed to look her in the eye, tell her she was sorry for all those missed opportunities, and end her misery. It was beautifully played, as was Jim’s decision, driven by the desire to be with his family again, and full of emotion as he appreciated one final breeze and the sun on his face, resigned to his fate. “That sound you hear? That’s God laughing while you made plans.”

Ultimately, the point of these sometimes ponderously long scenes is to show the emotional devastation that comes when you’re surrounded by death. It makes those instances when characters succumb to hope (Rick radioing Morgan every morning) all that much more heroic. And it makes those moments when they give in to despair (Rick screaming “You’re killing us!” to the shuttered doors and impersonal cameras of the CDC) all that much more disturbing. The point of a good zombie story is not to kill the zombies (although that’s always fun) or defeat the zombies; it’s to show the struggle of people to hold on to their humanity in the face of … well, no damn good reason to do so. It’s “We don’t kill the living,” or “We don’t burn our dead,” or maybe Lori 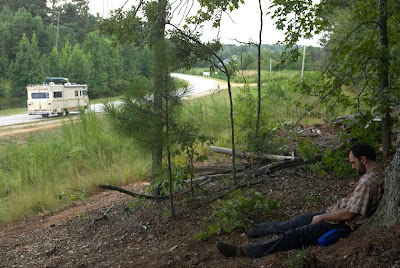 put it best: “We need time to mourn and we need to bury our dead. It’s what people do. ” These scenes may have given us restless leg syndrome, but they’re important to keep us invested and grounded in the reality of the story, as well as committed to the characters’ struggle not just to survive, but to find some level of peace.

And if the love triangle wasn’t enough to remind us of Lost this episode, then the Desmond-like introduction of the CDC scientist in the underground lab seemed almost deliberately done to evoke the comparison. It never really occurred to us how closely the show mimics Lost until now. It’s mostly pretty people (with some character actors thrown in) of various races and backgrounds, running around all dirty and sweaty, firing off guns, and pausing every now and then to cry over a dead body or wonder what the fuck is going on. Ever since we found out that the show has no intention of slavishly following the storylines of the comic series, we gave in and started devouring the books. The CDC storyline represents a massive diversion from the source material and really opens up the possibilities of where this story plans to go. The info 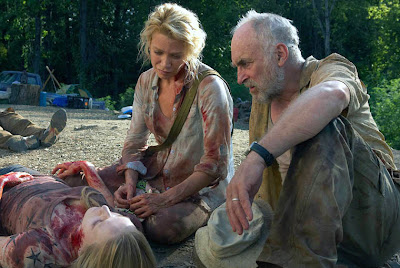 dump we got from the scientist’s transmission (“Day 194 since Wildfire was declared”), as well as the scenes of him accidentally destroying zombie tissue, imply that the TV show is going for more of a larger “mythology,” such as you would find on adventure dramas like Lost or Fringe or Heroes. We understand why purists might be annoyed by that but we’re excited by the possibilities.

And let’s all hear it for Carol, who found a creative (and seemingly very satisfying) way of finding closure for herself. Way to go, Carol! You seem perfectly stable and not at all scary now.