As much as we enjoyed the performances and were intrigued by the directions the plot is going (sort of), we didn’t like this episode as a whole and it took a second viewing to figure out why. The writing struck us as both a little lazy and a little impressed with itself. Rewatching the opening shot of Hardeen, brother of Houdini struggling against his bonds, we realized that the metaphor was more than a little heavy-handed and then as the rest of the episode replayed before us, we noticed more and more instances of it.

Worse, it was being reflected in the dialogue. “I don’t know if I’m thinking about anything,” says the annoyingly passive Angela to Jimmy, a line that captures her state of mind and way of approaching the world just a little too accurately to be realistic. “I knew you were misleading me yet you managed it anyway,” says Margaret to Hardeen with wonder, foreshadowing just a bit too cleverly her coming argument with Nucky. “Deception requires complicity, however subconscious,” Hardeen intones to her (and to us) gravely, just in case we hadn’t been hit over the head quite enough. When Eli oversteps his bounds, Nucky brings up Hardeen again: “It’s an entertaining act but if he wasn’t Houdini’s brother, nobody’d give a fuck.” Not exactly subtle. We threw our hands up in exasperation when Gillian brightly responded to Jimmy’s questions about how close she is to his father with, “Close is a relative term.” Oh, come on. If everyone’s going to speak witty metaphors instead of dialogue, they might as well do an all-Haiku episode.

In addition, Jimmy’s father turned out to be exactly who everyone thought and with Gillian acting strangely breezy about her apparent ongoing relationship with him, the news that he was being poisoned by her was about as surprising as the news that he’s Jimmy’s father. Not that the writing was obligated to set up mysteries for us. This isn’t a whodunnit, after all, but it was all just a little too neat and a little too expected, robbing these revelations of any emotional weight. Oh. The Commodore’s Jimmy’s father and Gillian’s been poisoning him. Alrighty then. All of these developments make sense and we like what they do for Jimmy’s character in particular, but the unfolding of them felt a little listless and haphazard to us. It was the same thing with Angela. Her trip to Paris was alm 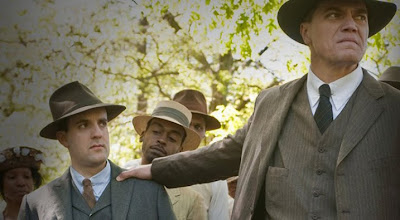 ost certainly not going to happen, so it was merely a matter of waiting for events to unfold and once again, they did, in exactly the manner expected. Angela’s flighty and strange “kissing friend” Mary skipped out of town with her sleazy husband. No surprises, nothing of interest. Just another inevitable plot development clicking into place.

We sound cranky and we don’t mean to. It was an enjoyable enough episode but to be honest, we’re starting to get a little antsy. Even for a cable drama, this show moves slowly, but we were in for the ride because of the great cast and the vivid atmosphere, figuring things would pick up near the end of the season. And they have; the plot is definitely moving and we’re definitely invested in at least some of these characters, but the writing is getting less impressive as the series goes on and we’re wondering if they’re relying just a bit too much on said cast and atmosphere to accomplish their storytelling goals rather than putting the work in on plot and pacing.

One character for whom all interest vanished (and the main reason for our negative feelings) is Van Alden, who in one episode plummeted down the list of characters from near-favorite to least interesting. We were willing to accept his obsessiveness, strict religious convictions and emotional distance, even though giving the law enforcement character those traits in a crime drama is a pretty big cliche. But we felt the character had nuance and that he was tortured by his demons, which made him interesting. He’s still tortured by his demons, but the nuance went out the window when he lapsed into a bigger caricature than he’d already been. Rather than the obsessive, strict man who lives by the rules, he’s spiraled out of control into pure villainy, murdering a Jewish man in front of a group of black people and walking away in a Christ pose because presumably, there’s nothing anybody can do about it. Feh. Not interesting. After he slept with Lucy we were intrigued, wondering where he was going and what he was going to do next. Now, we couldn’t care less.

Nucky and Margaret still manage to hold our interest, however. The argument was coming for a long time as it became increasingly difficult for her to lie to herself about the life she’s living. Nucky was having none of it, however, pointing out quite accurately that she has always pretended to be bothered by the lifestyle while at the same time indulging in it. What was surprising and a little illuminating was his disappointment that she would use foul language and birth control, something he would expect from the Lucys and Annabelles of the world. Margaret is clearly held to a higher standard. Although she was just as right to point out that he had no right to criticize her if he had no intent to marry her. Nucky fired his brother for threatening her so it’s obvious his feelings for her are deeper than he’d like to admit. This is the only thing we care about going into the finale: what’s going to happen to Nucky and Margaret.