We’re going to resist breaking this episode down into Pros and Cons because we always hated that form of review/recap. No matter what, it always comes across too smug by half. Still, the temptation is strong, becau 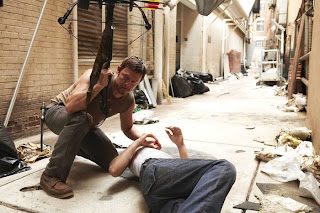 se here we are, hours after the episode ended, still undecided as to whether it was a good or bad one. We suppose the ultimate verdict will have to be “uneven.”

For instance, the opening scene with Andrea and Amy. In retrospect, it was a fairly decent way of defining these characters in relation to each other so that the inevitable loss to come would hit the viewer that much harder. Because let’s face it: as horrifying as those final minutes were, the only true emotional impact came when Amy got killed because a couple of minutes were spent in the beginning telling us who Amy was. Still, we didn’t know that as the opening scene was unfolding (although we suspected it) and at the time, we found the scene a little treacly (“No crying in the boat!”) and slow.

The same could be said for Guillermo and his band of vatos. We liked very much where that subplot wound up, but we kind of hated the way it unfolded. Certainly, one should expect to see many stories of societal breakdown in a zombie TV series, but everything about that gang when they were first presented to us felt like it was ripped straight out of a script from a ’70s 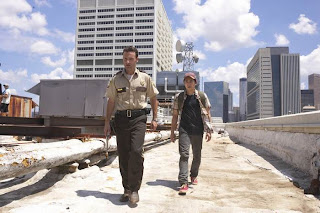 cop show. Turning it around at the end to reveal that they weren’t the criminals and gang members we assumed they were was a neat trick, clumsily executed, with a magical abuela and heartstring-tugging old people in distress. Throw in a handful of adorable dogs and it all got to be just a little too much for us. Still, we liked Guillermo, especially at the end where he let the mask slip and revealed that he’s just a scared and exhausted guy who’s trying to hold his little corner of the world together for as long as he can. He’s a character we wouldn’t mind seeing again.

Of course, the very existence of Guillermo and his ragtag band living inside the boundaries of the supposedly uninhabitable Atlanta does bring to the fore one of the aspects of the show that kind of pokes at the back of our heads every time we watch it. Why, exactly, given what we’ve seen of them, was there a zombie apocalypse at all? How did (seemingly) the entire world get taken over by creatures that practically anyone can outrun and practically anyone can take out with little more than a baseball bat to the head? How is it that the military couldn’t contain this? How do zombies manage to stop tanks in their tracks? Knowing what little we know of the comic series upon which the show is based, we suppose we’re just going to have to give it the old suspension of disbelief, because it seems to us that explanations will not be forthcoming. It’s not easy, though; especially when Atlanta is treated as this ungodly dangerous place by mos 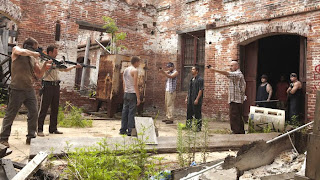 t of the characters only for us to find out that a small band of nursing home survivors are able to live inside its boundaries.

One thing we did like without any reservations was the telling of Merle’s story by looking at the clues he left behind. We got a decent enough explanation of why he took the drastic step of cutting off his hand and how he managed to survive it, but we’re no closer to understanding how he managed to survive in the city after that. Then again, that comes back to our earlier question: How dangerous can Atlanta be when 80-year-olds and people suffering from catastrophic wounds can somehow survive inside it? Maybe we shouldn’t make the same assumptions that the characters do, but if Merle did take the van, we kind of hope he doesn’t come back to the camp for vengeance. He’d be a far more threatening character if we don’t know where he is or when he’s going to show up again.

Whatever minor criticisms we have for this episode, the last ten minutes made up for them. We knew something was coming because except for the tense scene of Glenn’s kidnapping, 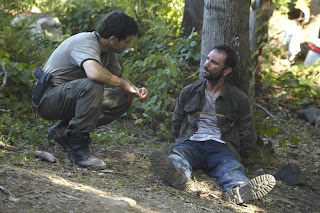 the episode was pretty quiet up to that point and with Jim’s grave-digging and Andrea’s (kind of silly, it has to be said) quest for wrapping paper, we could smell the death on the air. Even though we expected it, we didn’t expect to happen so quickly and without any warning, nor were we prepared for the bloodbath to come. Once again, we sat there in amazement, saying “Man, this show does not pull its punches.” One of the many things we loved about Lost was that when it was at its best, the stakes were high and you never knew who was going to survive. That camp massacre outdid anything we saw in the 6 seasons on the island. They need to get the hell out of there. It seems like the area surrounding Atlanta is becoming more dangerous than Atlanta itself.

In the end, having written this out, we can say now that it was a damn good episode. Some clunky parts, but the payoffs were worth it.

* Dale is likable enough, but odd. We can’t really get a read on him. Sometimes he comes across way too magical and wise and other times he seems, well, a little off. It was a nice touch to actually have a character come right out and say, “You’re weird.” 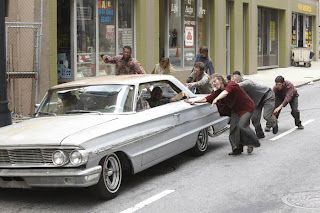 * Shane protected Lori throughout the camp attack, but Rick got to come in at the end and get the hugs. We didn’t miss the expression on Shane’s face when that happened. We’ll give the writers a lot of credit for shading these characters with some nuance. Shane came off mostly likable this episode even though at the end of last episode he seemed like a monster. For now at least, Shane seems to be the character who embodies what should be one of the big questions of the series: who’s in charge now? What gives them the right to take control of situations? When Rick is doing it, we want to believe he’s the right guy for the job, but when Shane does it, the ethical and practical questions start springing up.

* Andrea’s grief over her sister was beautifully played, but all we could think was, “You better get away from her.” How fast does the transformation of dead people into Walkers happen, anyway? 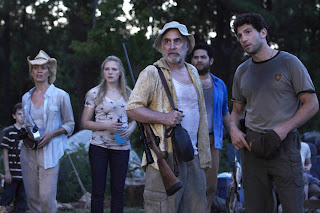 * Was Jim’s dream just dramatic license on the part of the writers, a way to give the episode an ominous foreboding feeling (not that it needed it) or does Jim have some sort of gift? “The only reason I got away is because the dead were too busy eating my family.” Horrifying. We think the title of the show refers as much to the survivors as it does to the zombies.

* Clunky dialogue of the week: “I’m gonna chop up your boy. Feed him to my dogs. They’re the evilest, nastiest, man-eating bitches you ever saw. Picked them up from Satan at a yard sale.” Seriously? That sounds like something from Kojak.