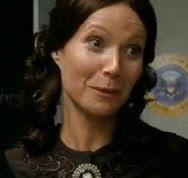 “You make the underflaps of my breasts burn like when I used to rub them with poison sumac.”

Well alright! We weren’t expecting that at all. In fact, how would we? Who could rightly predict that bringing Gwyneth Paltrow in for a guest stint would re-energize the show, bringing it back to its roots as something of a dark comedy with songs instead of what it had been becoming more and more, High School Musical with just a hint of cynicism? We haven’t laughed that hard at an episode since Season 1. Even better, it was one of those things where we kept having to pause and rewind because the LOL-lines were coming so fast and furious that we were missing them because we were still laughing at the last one.

Even more of a “Am I on Bizarro World?” moment: Gwyneth was by far the funniest and most entertaining member of the cast. How did THAT happen? Do you have any idea how difficult it was to square our image of the GOOP diva and far-too-often Vogue subject with the hilariously funny Holly Holliday, substitute teacher known for singing Schoolhouse Rock songs with full accompaniment or discussing how many times Lindsay Lohan has been in rehab with her Spanish class?

No, really. We don’t think you understand our dilemma here. We have never once mentioned Gwyneth Paltrow’s name on this blog without a heavily implied roll of the eyes, whether it was from her faux-Britishisms or her tendency to lecture people on how to live, she long ago wore out her celebrity welcome as far as we (and seemingly a majority of the public) were concerned.

But who can hate her after this:

And BELIEVE US, terminally white Gwyneth Paltrow singing a radio-friendly version of Cee Lo’s “Fuck You?” We had the bitchy jokes written before she sang one note. The problem? She NAILED IT. And she nailed it by having fun with it. It seems to us that she knew the number could have gone lame really quickly, so she played up her white-girl persona in the song and somehow, it just all worked. Oh sure, it was a cheesy feel-good number, but it made no apologies for that. Can you say you weren’t bopping along just a little bit?

Anyway, Sue’s decided that being friends with Will is boring and she’s back to plotting the downfall of the Glee club. We’re not sure what to think about Principal Sue. On the one hand, it’s got comedy potential and we do like seeing her return to her villainous ways, but we fear they’re painting the character into a corner. A Sue with the closest thing to absolute power is not a very interesting Sue in the long run.

Anyway, Will has monkey flu as well, which gives them the opportunity to slip in a fantasy dance number.

We never really loved the original Donald O’Connor version of the number. Sacrilege, we know, but we might as well admit it. The choreography was always jaw-dropping, but that pleading-to-be-loved style of performing always made us squirm. Although not as much as crazy Terri with a Vaseline-covered thermometer talking in a baby voice. Show of hands: how many are convinced Terri’s now pregnant?

In other McKinley news, Kurt and Blaine are spending more and more time together and poor Mercedes is being dragged along, where all she hears while they discuss their favorite Vogue cover of the year or the new Patti Lupone autobiography, is “Gay, gay, gay, gay, gay.” Kurt tries to set her up with a very cute football player (and one of only 5 black guys in the school), but she’s more interested in waging a war against Principal Sylvester and her tater tot ban.

On the one hand, we’re glad they’re giving Mercedes some screen time and we’re glad they’re addressing the fact that she’s the only member of the glee club who isn’t in or pursuing some kind of relationship. Unfortunately, we fear they may have botched it by turning it into something of a stereotypical “fat girl” story. She’s using food to compensate for Kurt having a boyfriend? Oh please. How condescending can you get? Give the girl a love scene and a big fat number to wail about it. How hard can it be?

As for Kurt, it remains to be seen if the relationship with Blaine is just a friendship or something more. We’re glad they didn’t drop the Karofsky subplot but we have to be honest, taking it into the land of death threats may have turned this more melodramatic than we would have liked to see. Still, we can’t complain that much because the Kurt storyline remains one of the best examinations of gay teenhood we’ve ever seen.

And the McKinley high theater department budget continues to stun. We love when they do reaction shots of Kurt during these numbers that are gay classics. Another thing we love is when the glee kids are really getting into watching one of their own perform. They may be of different cliques and they might even hate each other sometimes, but it’s endearing how they will cheer on one of their own giving it their all. At the end of the day, they respect a good performance.

Anyway, Holly almost becomes Will’s permanent replacement, until she realizes her method of engaging with the kids only works in the short term and she’s better suited to remain a subsititute. Will gets his old job back and continues to ignore what the kids want in favor of teaching them what he thinks they need to know. It’s kind of an interesting reflection on teaching. Do you engage the kids on their level or is it your job to, for lack of better phrasing, bring them up to your level? We’re not sure Will has really given the matter any thought. After all, his “teaching” the kids tends to result in some ego moves, like giving himself the lead in a huge number:

This is a public school right? We shudder to consider the tax burden in Lima. How else do they mount these Broadway-level numbers just for the fun of it? Still, it’s a fun number and we’re going to shock ourselves even further by admitting that not only does Gwynnie nail this number as well, but she looks really pretty here. Ouch. That hurt. But y’know? She may just have been our favorite guest star. Yes, even better than Kristin Chenoweth.

Quotes and we’re out:

“Mary Todd Lincoln in the house! My husband was probably gay and I’m bipolar, which makes me yell things like ‘That teapot’s spreading lies about me,’ or “That can’t be my baby because I don’t love it! ”

“Mr. Schu taught me the second half of the alphabet. I stopped after m and n. I thought they were too similar and got frustrated.”

“I suggest selling yourself on ‘Men Seeking Men with Butt Chins.”

“Ohmigosh, I open up my mouth and a little purse falls out!”

“In fact right now I’m tempted to sell your scalp on the black market as a tiny little shearling coat for only the most fashionable of premature babies.”

“It had been festering in a small clutch of loud bisexual primates, not unlike your glee club.”

“I thought we were friends.”
“That got boring.”

“Her name was Cameo. She was like an attractive Biggie Smalls.”

“Well. At least I didn’t fall and break my talent.”

“Should we toke up some medical grade marijuana? I wish!”

“Nutrition in this school is abysmal.You know what this is?”
“Toilet brush.”
“When I showed this to Brittany earlier she began to whimper, thinking I had cut down a small tree where a family of gummi bears lived.”