We’re not exactly being original when we point out that Boardwalk Empire, like most organized crime stories, is essentially an examination of power; what people will do to get it, what they do to hold on to it 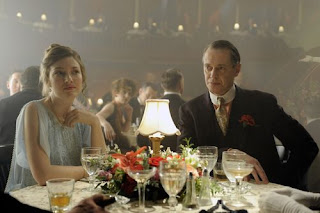 , what happens when it fades and how the powerless figure into the story. These are all classic mob story themes. What sets Boardwalk Empire apart from the usual mobster tales is that it’s about power in the general sense, rather than merely political or economic power. Aside from the overt power struggles between competing mob organizations and political factions, BE is about Margaret learning to wield the power she has at her disposal; it’s about Angela realizing she has no power at all; it’s about Jimmy realizing his lack of pretension when it comes to his morality gives him a power advantage over Nucky, who still thinks he can keep his hands clean even in the middle of a war; it’s about Van Alden and how far he’ll go to abuse the power he’s been given.

We’ve made no bones about the fact that the organized crime stuff interests us the least in all this drama, especially since most of the mob characters are based on real people, which means when, say, Jimmy and Gillian pull guns on Lucky Luciano, we know he’s not going to get killed. Which isn’t to say there isn’t any tension in the scene; it’s just that it’s reflected 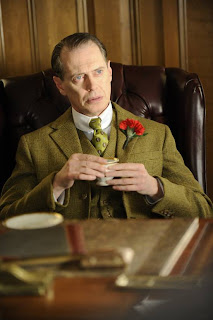 back on the non-historic characters. We didn’t much care what happened to Lucky in that scene but we cared about how this was going to blow back on Jimmy and his mother. You don’t double cross Lucky Luciano and just walk away from it. It’s a neat trick on the part of the writers because it turns the historic and well-known figures into tools to tell the story of the fictional characters. We suspect this is part of the reason why they decided to “fictionalize” Nucky by changing his last name to Thompson to distinguish him from the real Nucky Johnson. For us, this is the only way to keep the mob stuff marginally interesting. We don’t care about Lucky, but we’re wondering what’ll happen to Gillian for her part in double crossing him. Much like we don’t care about Nucky’s little war except how it impacts his relationship with Jimmy, which in turn affects Angela. And then there’s Margaret, of course, whose personal journey is now intricately bound with the crime and the politics of the day.

We wouldn’t normally say this about a competent and active female character, but sometimes we think Margaret’s a little too smart for her own good. Mme. Jeunet only had to suggest to her that she had some power and Margaret was immediately testing it. There’s no way she was doing it for h 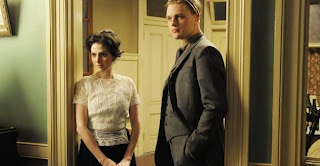 er former employer. She was doing it for herself. She was doing it because she took one look at the delusional Nan and realized she never wanted to be as ridiculous and pathetic as this girl. Why else would she practically rip that blue dress off her and force Mme. Jeunet to give it to her? This was about Margaret ensuring that she wasn’t going to be some silly courtesan. The thing is, “mistress with ambition” can be a pretty dicey place to be, especially when you’re traveling in circles that settle differences with guns. This time she got her dress ruined; next time she may not be so lucky. We’re not good at making predictions with this show but we don’t think one bloodied dress is going to dampen her ambitions. She’s got a taste now and she’s not going to let go that easily. She’s basically turning into Nucky. That’s why we’re so conflicted about her journey to realization. Sure, it’s great to see a story of a disenfranchised person gaining power and knowledge, but it’s got a disturbing undertone when the de facto mentor is corrupt to the core.

There’s no undertone to Angela’s story. It’s just flat out disturbing. We kind of wish Margaret would meet her and take her under her wing because Angela appears to have none of Margaret’s skill for navigating this world. She seems both repulsed and attracted to Jimmy and she’s sadly compliant whenever he’s around. Worse, she seems to have pretty bad taste in allies, because the sleazy photographer and his wife certainly didn’t provide any port in 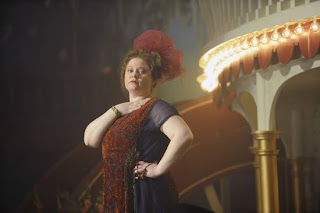 this storm. Jimmy’s way too tightly wound and every scene with the two of them seems likely to explode into violence at any second. Of all the characters, it’s Angela whose fate seems most bleak to us. She just doesn’t have the tools to figure out what to do about her situation.

Jimmy, on the other hand, seems to have learned how to throw his weight around from his time with the Chicago mob. Nucky may act amused, but his real feelings regarding the new self-assured Jimmy are a combination of anger and respect. He doesn’t like seeing this kid make demands of him but he can’t help admiring him for how smart he is for making them. Still, we have to wonder what the hell he and Nucky thought was going to happen when Jimmy came back to AC. Of course Van Alden would be there waiting for him. That seemed like a pretty big risk to take. Sure, it seems to have worked out in the end, but now they’ve exposed that cop to Van Alden, who surely won’t buy his story of being attacked and having to kill the witness. It seems to us that Nucky, for all his swagger, is in over his head between Van Alden’s obsessions and the various members of the organized crime world who are looking to start a war with him. 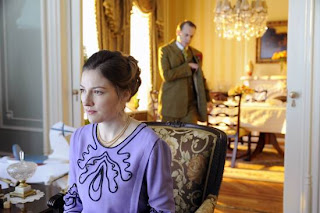 * How FABULOUS was Kathy Brier as Sophie Tucker singing “Some of These Days?” We wanted everyone in the scene to shut up so we could hear the whole number.

* Is it awful that we exclaimed “Her dress!” at the end? It really was a pretty dress.

* Is it even more awful that we want to see Jimmy and Richie Half-face team up like two action heroes and take out all of Nucky’s annoyances?

* Gillian and Jimmy just may have the strangest mother-son relationship in the history of television. They’re no Shirley and Keith Partridge, that’s for sure.

Previous post:
The Walking Dead: “Tell It to the Frogs” Next Post:
RuPaul’s Drag Race Season 3: Meet the Ladies