Home » Television » The Walking Dead: “Tell It to the Frogs”

The Walking Dead: “Tell It to the Frogs”

Despite the ever-expanding size of the cast, this episode made it clear that for now at least, The Walking Dead is Rick’s story. He drives almost all the action and like any decent square-jawed hero, he’s become the moral center of the story. As the people around him flirt with their darker sides, 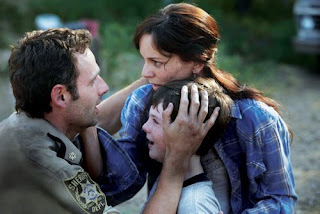 if not give in to them altogether, Rick is dead set on maintaining a set of principles. Unlike the other survivors, his entrance into this world was sudden and very recent. “I felt like I’d been ripped out of my life,” he tells them. For him, the world that he knew is still recent, still real. This, more than any of the stated reasons, is why he has to go back for Merle. He has a moral code and in spite of the world collapsing around him, he still believes that’s no way for a man to die, no matter who the man is. It is the ultimate act of hope in a world almost completely devoid of it.

Rick’s introduction to the group and dramatic reunion with his family upended the somewhat fragile order in the camp. We can’t help wondering if any of the other members of the camp knew about Shane and Lori. As if the tension wasn’t high enough, could you imagine what would happen if Rick found out? As it is, Shane has gone from “Hey, that guy’s kind of a creep” to “Holy shit, that guy is freaking dangerous.” We don’t know what to make of the revelation that he told Lori Rick was dead. It could be that he really believed 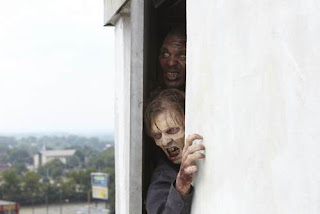 that but we can’t really blame Lori for her reaction, even if it was as much about being angry with herself as it was being angry with Shane. Still, if he deliberately left Rick for dead so he could have Lori, that pushes him into pretty villainous territory.

Even worse, Rick’s obviously got natural leadership qualities as well as the aforementioned moral code. Shane hasn’t proven himself to be either a very good or a very moral leader. He’s keeping that camp in fear and he wrote of the scavenging team the minute he thought they were in trouble. Compare that to Rick, who’s actually going back to rescue the one member that almost everyone else would rather see dead. Shane let him go because ultimately it was Rick’s ass on the line, but if Rick ever makes a decision that Shane thinks will endanger the whole group, expect an explosion. When society breaks down, interpersonal conflicts can escalate into full scale battles.

Another thing that apparently happens when society breaks down is a reversion to old school gender roles. Obviously, the men haven’t noticed it, but the women are all rightfully grumbling over the assumption that the women will do what used to be called “women’s work.” Even worse, the legal and institutional protections that allowed women to become more than property to men have all disappeared, giving wife-beating Ed the freedom to openly 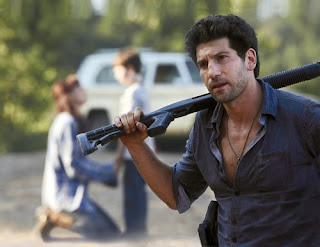 punch his wife in front of a group of women. Just as Merle felt the freedom to spew his racism openly and unapologetically last week. Just as Shane felt the freedom to take out his anger on Ed, delivering a beatdown that was both viscerally satisfying and horrifying at the same time. This is what Rick’s up against. Actually, this is what they’re all up against. The zombies (you can’t pay us to call them “geeks”) are not the real threat here. People are.

And the darkest of all is Merle Dixon. That opening scene on the roof was jawdropping in its intensity as he went from delirium to begging forgiveness for his sins to defiance all in a handful of minutes and all at the top of his lungs. We knew he’d figure out some way off that roof but for the life of us we can’t figure out how. How did he reach that hacksaw, which looked pretty much unreachable the last time we saw it? Why did he cut off his hand instead of using the hacksaw on the cuffs? Or if that didn’t work, why not cut off a thumb? And how do you cut your hand off with a hacksaw, which is a task that would take a little time and effort, and not pass out from pain, shock, or loss of blood? We can rule out the latter, because strangely, there was almost no blood on the scene. And how did he get off that roof, anyway? They better come up with a damn good explanation for his escape, but we’re bracing ourselves for disappointment on that front. We’ll see.

* We really liked the campfire scene. It demonstrated how worn out a lot of these people are, 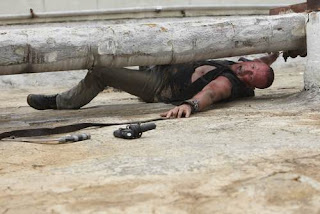 especially in comparison to Rick. Plus it just felt right. If people are going to shed the trappings of modern civilization, they’ll naturally return to things like sharing stories around a campfire.

* We can’t say we’re enjoying Darryl anymore than his brother. A little too cut from the same cloth to be interesting. Ad wife-beating Ed to the mix and that’s a might high asshole quotient for one show. Still, the group definitely needs to pick up more of those crossbows because they make a pretty efficient anti-zombie weapon.

* For survivors, the members of the group can show some pretty questionable instincts. What the hell was Glen thinking driving that wailing car straight to their camp? And why did it take 5 or 6 men so long to kill that deer-eating zombie? The kids can just go off into the woods to play? Snap out of it, survivors! And why the hell are they camped out in the middle of nowhere anyway? We realize travel conditions are tough to say the least, but shouldn’t they get a little distance between themselves and Atlanta? Not to mention looking for other survivors? Then again, Shane’s got them all too scared to do anything but rely on his leadership.

* “Why don’t you take that stupid hat and go back to On Golden Pond.” Ouch. The good news is, that’s the only piece of clunky dialogue that stood out to us this week. 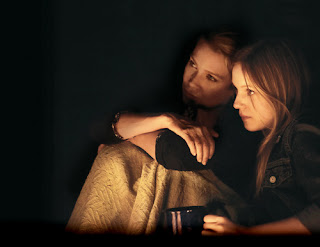 * Carl obviously worships his dad and seems to have a calming influence on his mom. “Everything that’s happened to him so far, nothing’s killed him yet.” The writers just have to be careful not to fall into the trap of turning him into one of those magically wise children that always seem to pop up in post-apocalyptic stories.

* Is it us or is the zombie makeup wildly inconsistent? Every once in a while you’ll see one that’s truly horrifying and disgusting, but during the crowd scenes, some of them look awfully close to Thriller backup dancers.

Before you hit the comments section, we request that you leave any spoilers from the comic series out of the discussion. Thanks.