If you’re over the age of 45 and were raised Catholic, the characters of Katherine Olson (played by Myra Turley) and Anita Olson Respola (played by Audrey Wasilewski), Peggy’s mother and sister, will more than likely seem very familiar.

Katherine and Anita are very much peripheral characters (who were nonetheless quite memorable) and most of their scenes were brief. Janie Bryant did her usual brilliant work in making the costumes define character, time, and place but they don’t necessarily lend themselves to the kind of analysis the main characters’ costumes inspire. All you needed to know was that these characters were working class Catholic Brooklynites and that they didn’t understand Peggy or her choices in life. We weren’t around during this period, but women were still dressing like this to go to church well into the ’70s so a lot of these clothes look very familiar to us.

Extra fun for the Catholics: count all the Jesuses in the Olson/Respola apartment. And check out that plastic slipcover on the couch.

As always, there is a standard spoiler warning for those planning on watching the series.

Peggy stops in at the Olson/Respola residence to do her time (“We never see you.” “Well, I’m here.”) and to drop off a borrowed vacuum cleaner (“Did you empty the bag?”). The conversation is deceptively light, with an undercurrent of tension that quickly becomes overt when her mother more or less orders her to start going to Sunday Mass. Peggy tries her best to assert herself, but the guilt-tripping and family dynamics prove oppressively strong for her. When Katherine leaves the room, Anita gently unsheathes her claws and reminds Peggy (and informs us) that, for a while at least, the State of New York didn’t think she was capable of handling her own affairs. Peggy tries to leave but Anita pressures her to say goodnight to her nephews. At the time, it was ambiguous whether the baby in the crib was Peggy’s or not. This scene tells us two things: that her family knew about the baby and that Peggy had some sort of breakdown after the birth.

As with almost every scene with these characters, the point was to show how similar they both are and how those similarities set them apart from Peggy. We can remember being slightly confused during this introductory scene because – and it seems silly now, looking at these screencaps – we honestly had trouble telling them apart.

Peggy is in a schoolgirl outfit, which sets her apart from the matronly uniforms of her mother and sister and also serves to illustrate how they infantilize her. Anita favors florals, possibly in reference to her more traditional life choices and Katherine is usually an imposing column of dark because, well, she’s imposing. 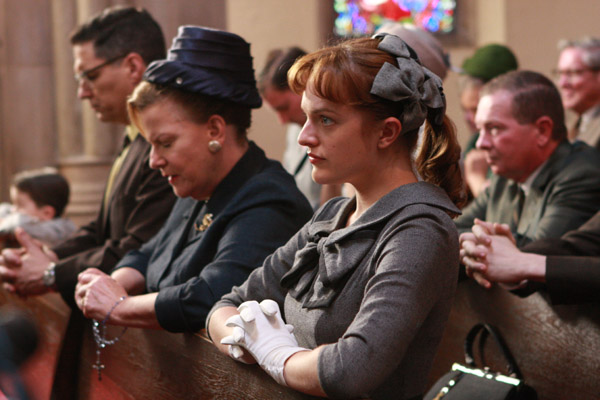 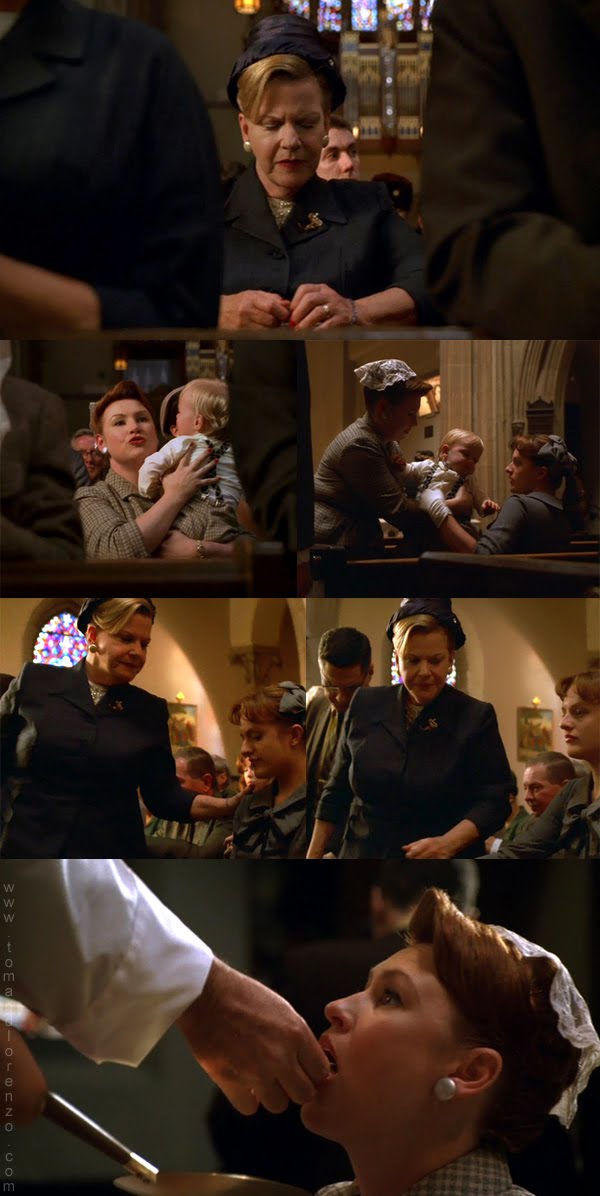 Like every good Catholic girl, Peggy dutifully shows up for church the next Sunday and takes her place with her family. Anita leaves the baby with Peggy while she goes to receive Communion and Peggy sits there, a sinner in the eyes of her family and ineligible to receive the sacrament, deeply uncomfortable and a bit angry. She shows absolutely no affection or even interest toward the baby.

Like every Catholic woman of the period, they’re all wearing head coverings in church, which was required at the time. You can’t really see much of the clothes, but we still wanted to highlight this scene for the dead on accuracy. This is exactly how women looked when they went to church. It’s notable that all three of them are wearing gray. Peggy’s trying to fit in. 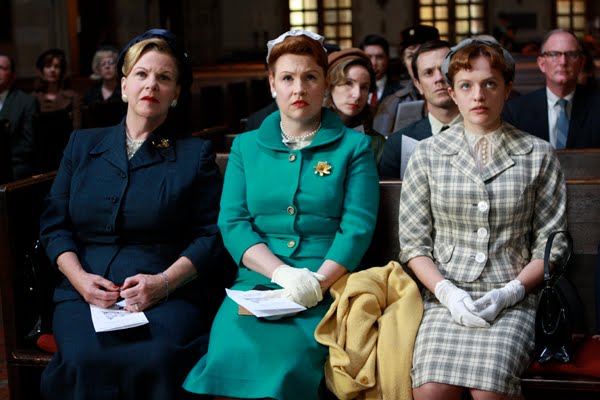 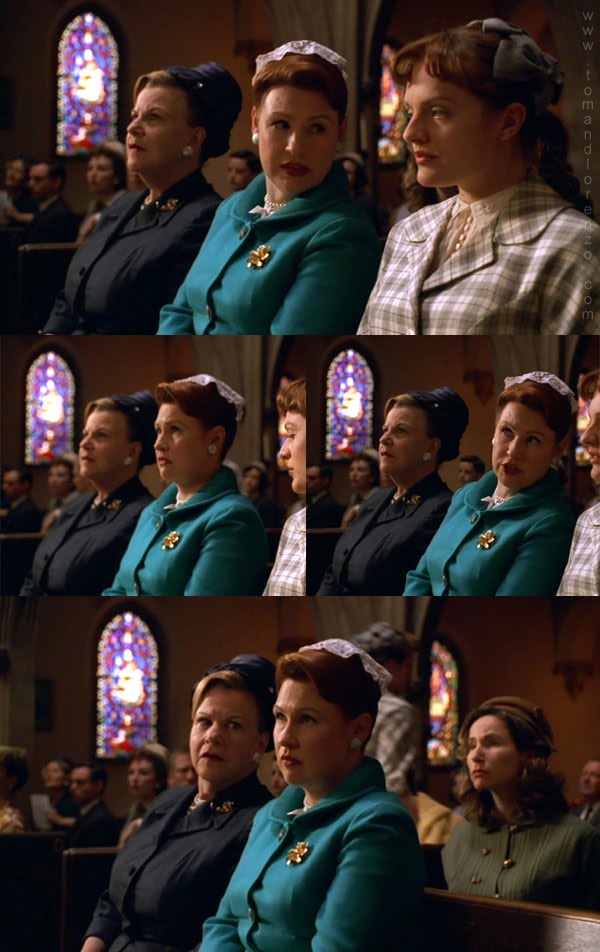 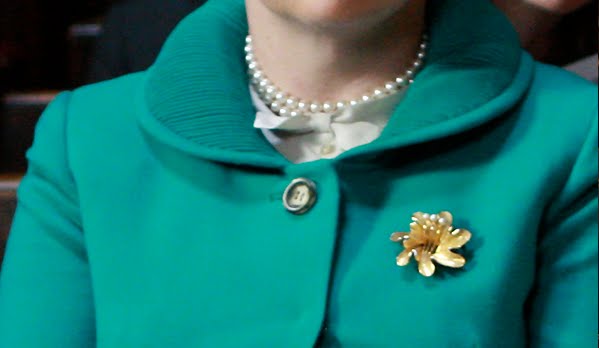 Peggy makes it to church once again, even though she has a hangover and can’t escape the judgment of her sister (“I can smell the liquor on you!”). She goes outside for a breath of fresh air and meets the young Father Gil, who is newly assigned to the parish and will be attending Sunday dinner at the Olson/Respola’s. At dinner, the older women are obsequious to the point of making him uncomfortable but Katharine’s not so starstruck that she can’t demand the good Father say a proper Grace after the ad-libbed, modern version he tries to slip in.

Notably, they’re all more dressed up than they were the week before, probably because they’re hosting the new priest for Sunday dinner, which would have very much been considered a social coup worth strutting over a little bit. Notice that the two younger Olsons are wearing gloves in church. Anita and Katherine are practically indistinguishable from each other in their church clothes, both in solid shades of blue; Katherine’s in a funereal shade, appropriate for a widow, and Anita’s in a more youthful shade. Peggy, of course, sticks out in her gray plaid.

Later when they get home, Anita switches to a floral dress that convinces us more than ever that this dress was borrowed from her. Since she was responsible for getting dinner on the table, it would have made sense for her to change out of her suit and into something a little more hostess-y. 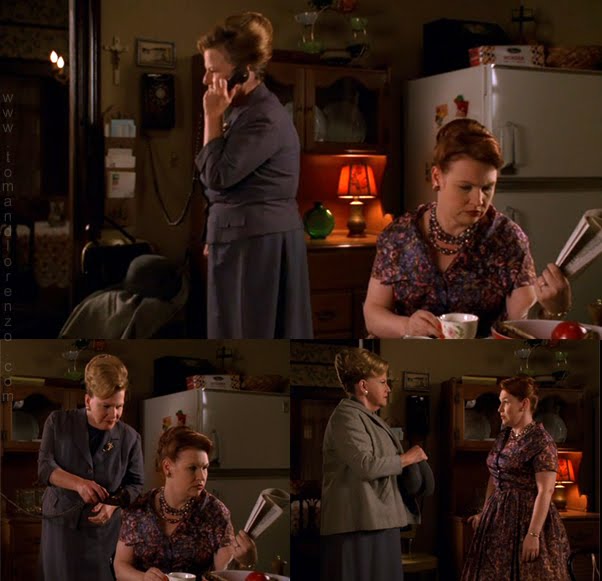 The following Sunday Father Gil stops by again, although he can’t stay for dinner. He had asked for Peggy’s help in writing a sermon and wanted to drop off a copy for her. Katherine is thrilled but Anita is annoyed that Peggy’s getting this kind of attention.

Social class is a major theme in Mad Men and it’s always reflected in the clothes. Compare theirs with any of the other female characters. Like a lot of Peggy’s clothes from Season 1, they’re clearly department store clothes and not always of the highest quality. The fabrics aren’t rich and the fit isn’t always so hot, especially on Katherine’s suits.

Just take a look at Anita’s dress and try and tell us that Peggy’s blind date dress wasn’t hers. 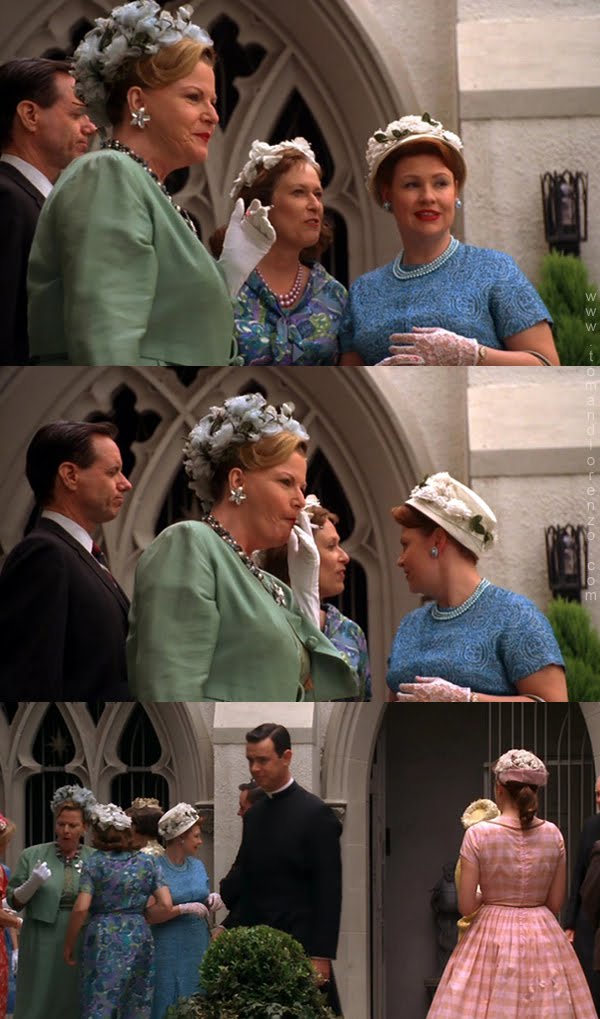 Easter Sunday in the church courtyard and the children are on an Easter egg hunt. Katherine and Anita are in the thick of socializing with the other women in the parish and Peggy, as usual, stands alone. Unbeknownst to Peggy, Anita told Father Gil her version of Peggy’s pregnancy (“She seduced a married man!’) during confession. He pointedly hands her a blue egg, saying, “For the little one.” and walks away. The look on Peggy’s face reveals that she knows that he knows.

Everyone’s in their Easter finest. In all likelihood, all of these outfits are brand new. They certainly look it in comparison to previous outfits. Katherine switches out her widow’s weeds for a bright Easter-appropriate green and Anita’s in a complimentary blue. Once again, Peggy is in a plaid, this time it’s an Easter pink. The older Olsons are in matching silhouettes and Peggy stands out in her flared skirt. Both older Olsons have large floral hats and Peggy’s in a much more subtle cap. It’s always about pointing out how far away from her origins Peggy is getting. Notable that all the women besides Peggy match each other. 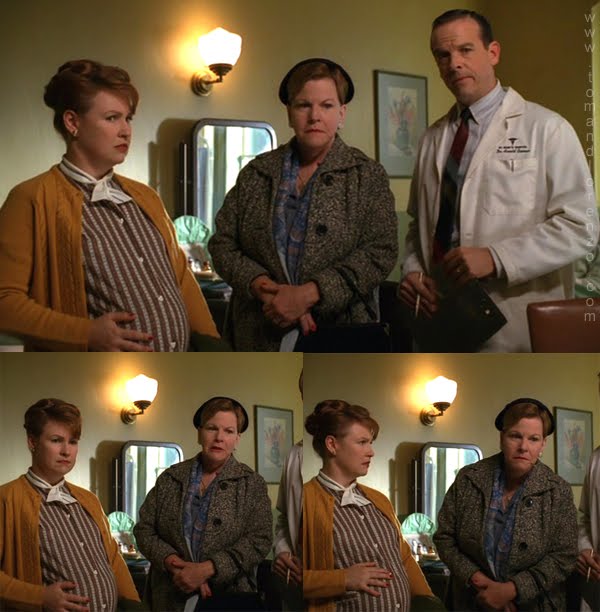 In a flashback to the time when Peggy was in the hospital after giving birth, we see her distressed mother and very pregnant sister dealing with the aftermath. Peggy is almost completely out of it, whether from drugs or from some sort of psychotic break isn’t made clear although further flashbacks reveal that she was in a pretty bad way for a while. A hand-wringing Katherine assures her that they’re going to take care of everything and get her out of there.

From a costume perspective, the only thing that’s notable about this scene is that we get to see what Katherine and Anita wear when they’re not wearing their Sunday finest. These are the kind of everyday clothes people wear when they find themselves suddenly visiting a family member in distress. No thought or care was put into these outfits. More than likely, they both threw on their coats and rushed out the door when they got the news. 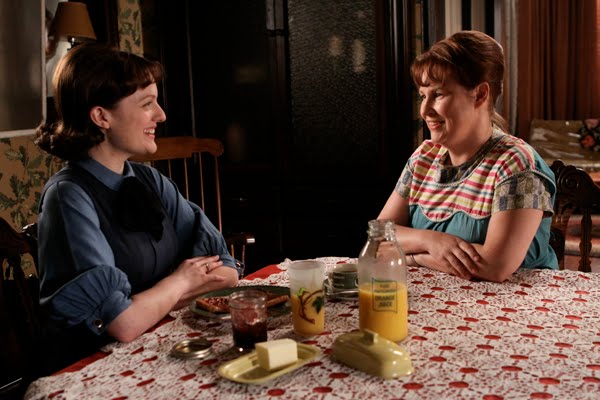 Peggy and Anita have a cute sisterly talk that shows they’ve largely gotten past whatever emnity existed between them. Anita complains about how their mother is driving her crazy while Katharine repeatedly bangs the dying television in an attempt to get it to work. Peggy tells Anita that she’s planning on moving out of Brooklyn and into Manhattan. They both agree that Ma is not going to take it well. “So you’re going to be one of those girls?” asks Anita with a combination of envy and admiration. “I am one of those girls,” Peggy responds proudly.

God, remember those housework aprons? Could they have been any uglier? This time it’s Peggy who’s in a solid business-like color and it’s Katherine and Anita in the plaids and stripes and geometrics. Either way, she always stands apart from her family. 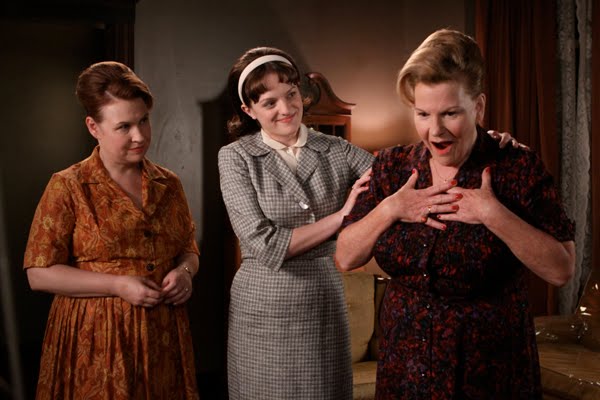 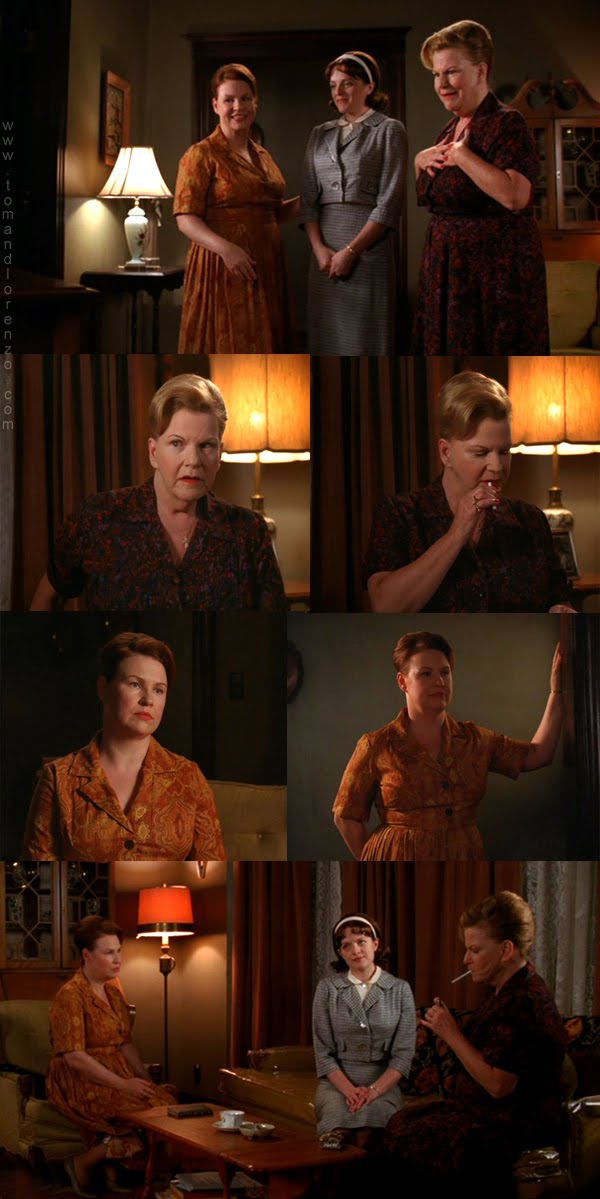 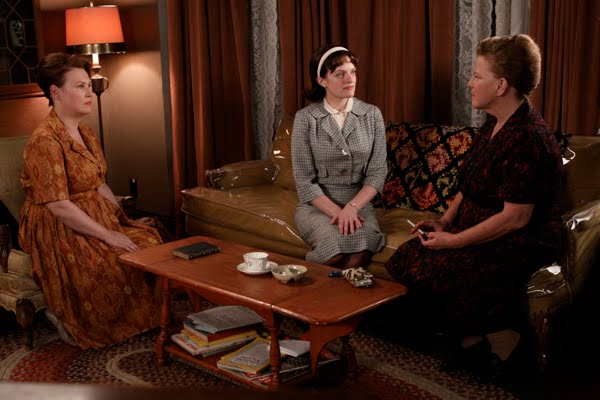 Peggy buys her mother a new television set and she’s pleased as punch until Peggy tells her that she’s moving into the city. Katharine does not respond well, to say the least. “You’re gonna get raped, you know.” Anita defends Peggy, once again revealing that their relationship appears to be largely healed. Katherine refuses to even look at her when Peggy tries to kiss her goodbye.

In style, the two older Olsons are essentially wearing the same dress. What’s notable is that the colors are so oppositional, which is highly unusual for these two. Anita is still firmly entrenched in her world, but she’s at a point where she understands what Peggy wants out of life and is willing to defend her to their mother. She and Peggy will never dress alike, but this was a nice way of illustrating that Anita isn’t always exactly in lock-step with her overbearing mother.