It’s very gratifying to read all the comments to the effect of “I’ve never watched it before, but this series of posts is making me want to check out Mad Men,” but we implore those of you who have not seen all of Season 1 and are planning to: PLEASE DON’T READ THIS POST. There aren’t a lot of shocking twists in Mad Men, but when they pull one out, it’s really shocking. The S1 twist regarding Peggy is one of the show’s all-time most memorable moments and it would just kill us if it got spoiled for someone who doesn’t know about it yet. There’s no way for us to do this post without talking about it, so please, we’re begging you, finish out the season and then come back and read this one.
Season 1 Episode 8 – “The Hobo Code” 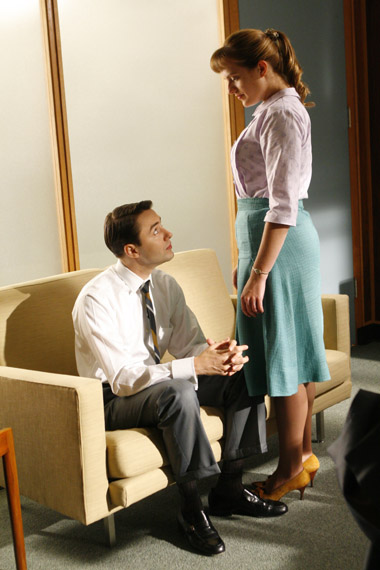 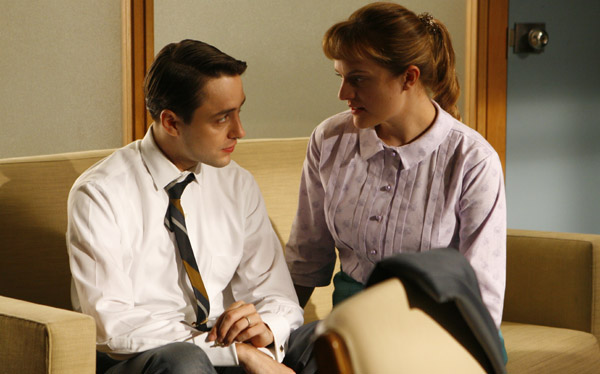 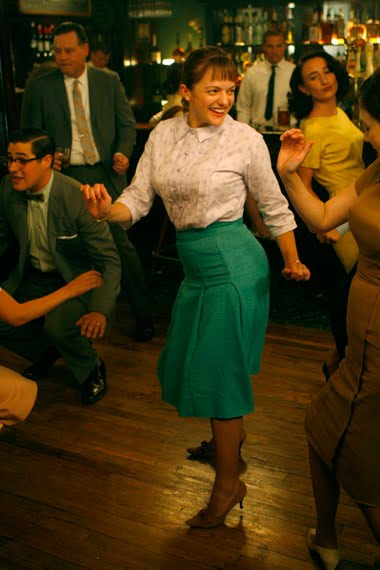 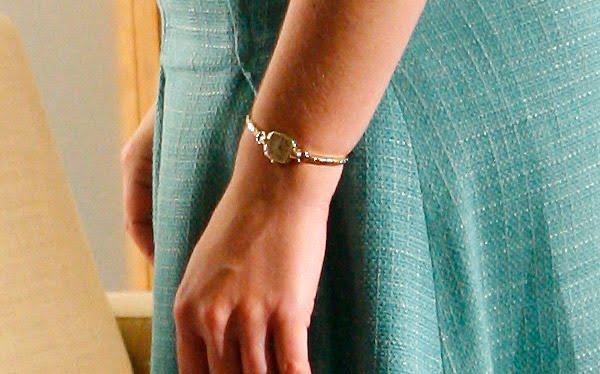 Peggy comes into the office at seven, nervous because she finds out that day if the Belle Jolie people will like the copy she wrote for them. She runs into Pete on the elevator and once he’s in his office, he calls her inside. Nature takes its course from there and they wind up doing it on his office couch in a scene that ranks among the hottest they’ve ever done. Seeing little Peggy with her legs in the air and panting like she’s on fire was definitely a shock. Later, the gang goes out to celebrate Peggy’s career triumph and Pete humiliates her by telling her he doesn’t like her when she’s like this. “This,” being happy and confident.

This almost looks like two outfits smashed together. On top, you have a typical Peggy blouse in a washed-out color with a Peter Pan collar. On the bottom, you have this tight, rich-looking skirt in a vibrant color that makes her look…well…womanly. From the waist down at least. She’s still Peggy, but she’s a sexual Peggy, which is a side of her we really haven’t seen before.

The next day, Peggy comes into the office early again and looks around with the hope that Pete will be there. He shows up hours later and ignores her on the way into his office.

We don’t think Peggy ever wore this outfit again. We could be wrong about that but Peggy doesn’t have a lot of outfits in rotation. In a strange way, her wardrobe is as memorable as Joan’s or Betty’s but for different reasons. We remember her outfits because so many of them are just not very pretty outfits. They’re memorable for their dowdiness, if that makes any sense.

Peggy doesn’t really have a signature look (outside of a reliance on Peter Pan collars), but she will return to this silhouette and style – short sleeved blouse or jacket over a pleated skirt – enough times to make it her apparent go-to. The busy pattern and dowdy color reflect her feelings in this scene, she’s both confused and disappointed by Pete’s actions. 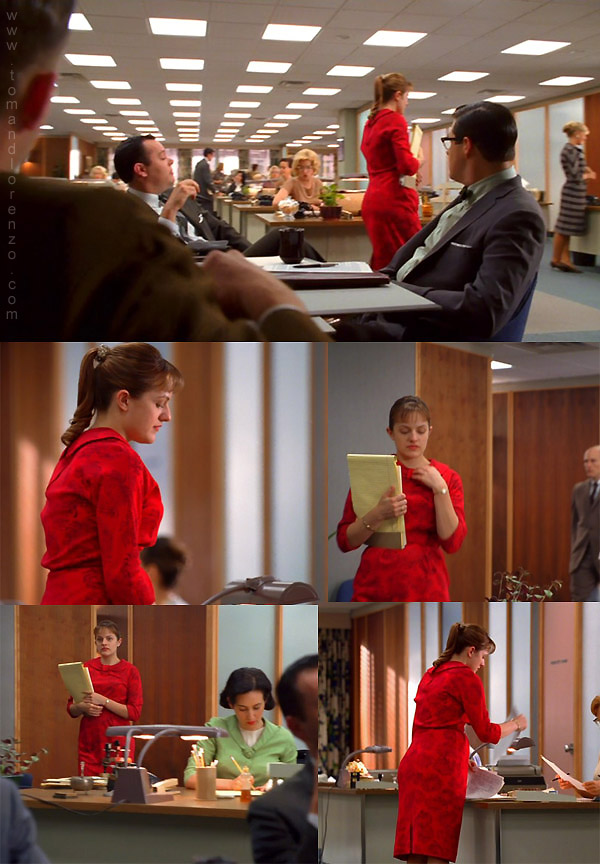 Peggy rips her skirt (coincidentally – or not? – the “womanly” skirt we referred to earlier) and Joan lends her an old outfit of hers that she keeps in the office as a spare. As Peggy walks through the office, we’re treated to a running commentary from the guys about how unattractive and frumpy she’s been looking lately, comparing her to a fruit that went bad. It’s the first time any character has commented on her weight gain, which was handled very subtly up till this point. So subtly that, for us at least, it kind of opened our eyes to it because we hadn’t really noticed it. We just thought she was getting frumpier.

Given that Joan assumed Peggy was having a wardrobe issue because it was “one of those days” we can assume with near certainty that this is the dress – the RED dress – that Joan keeps around for when she’s having one of those days. How very Joan. What’s interesting is that, given everything we know about Joan’s 1960 wardrobe, this must be more than a couple years old. Except for the color, nothing about this really looks like something Joan would wear in the “present” day. This is exactly what Joan implied it was: an old dress she keeps around the office for emergencies.

Pete badgers Peggy over office business and she responds in as cold and business-like a manner she can muster. Pete gets annoyed with her and grabs her, which she makes perfectly clear is not something she likes having done to her. He lets go of her and they talk …not so much “about,” as “around” their previous romantic interactions. She expresses her annoyance with his hot and cold reactions toward her and he condescendingly pretends like he doesn’t know what she’s talking about. This comes after several scenes with the guys wherein it is made clear by the guys that Peggy isn’t desirable. Pete being Pete, he simply erases his attraction to her from his mind because it wouldn’t look good for him if it got out. No one respects the guy who sleeps with the ugly girl. Not in Pete’s mind.

This is another in an increasingly long line of drab and unflattering outfits for Peggy. One thing that puzzled us about her wardrobe was how she managed to have one at all considering how skinny she was before. Where was she getting the money to buy an entire new wardrobe of larger clothes? Scroll down and we’ll give you our theory. 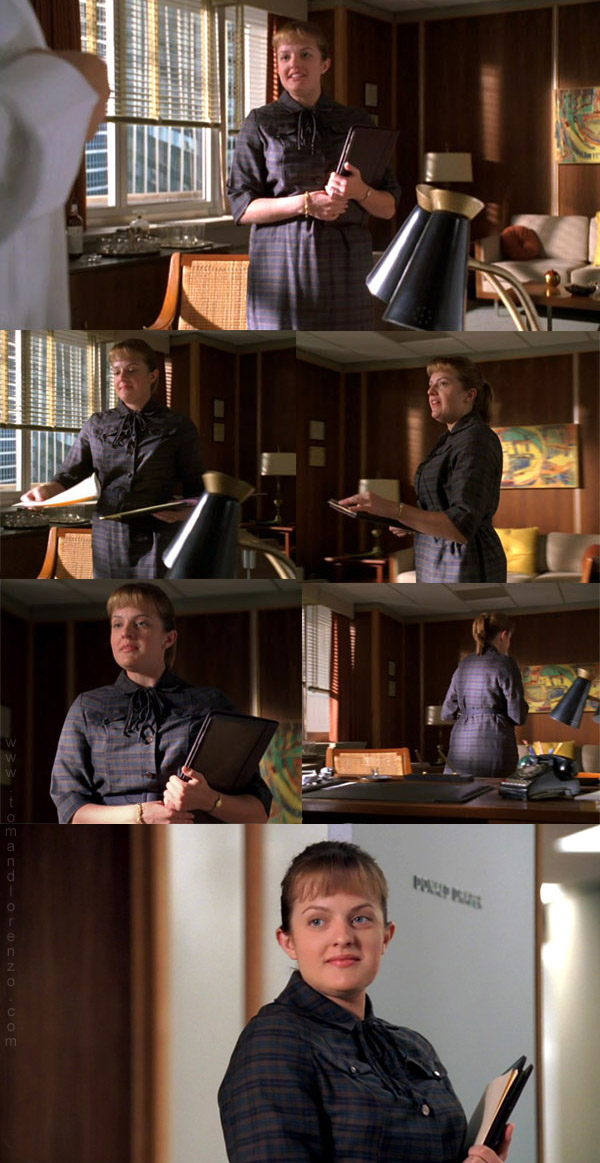 Don asked Peggy to write some copy for a new client, a “weight loss belt” to be marketed to women. Peggy takes the product home and tries it on, only to find out that it’s more “marital aid” than weight loss-oriented. She presents her copy to a confused Don, who can’t make head or tail of it until she clues him in on exactly what it is The Relaxiciser does.

Peggy favors the darker, more masculine colors whenever she’s in the man’s side of the advertising world. But what really makes this outfit interesting is what occurred to us when we were taking these screencaps. This really doesn’t look like Peggy at all. It doesn’t look like something she would choose to buy or wear. She’s not stylish, but even for her this is matronly. Then it hit us: these are her sister’s clothes. We won’t meet Anita until Season 2, but this is straight out of her wardrobe. She’s a larger size than Peggy and like we said, it just doesn’t seem likely that Peggy would have the money to buy a new wardrobe, so the only thing that makes sense is that she borrowed most of her larger-sized wardrobe from either her mother or her sister. Hats off to costumer Janie Bryant, because that is some brilliant planning. As you’ll see when we get to the Olson women, this looks exactly like something they would wear. 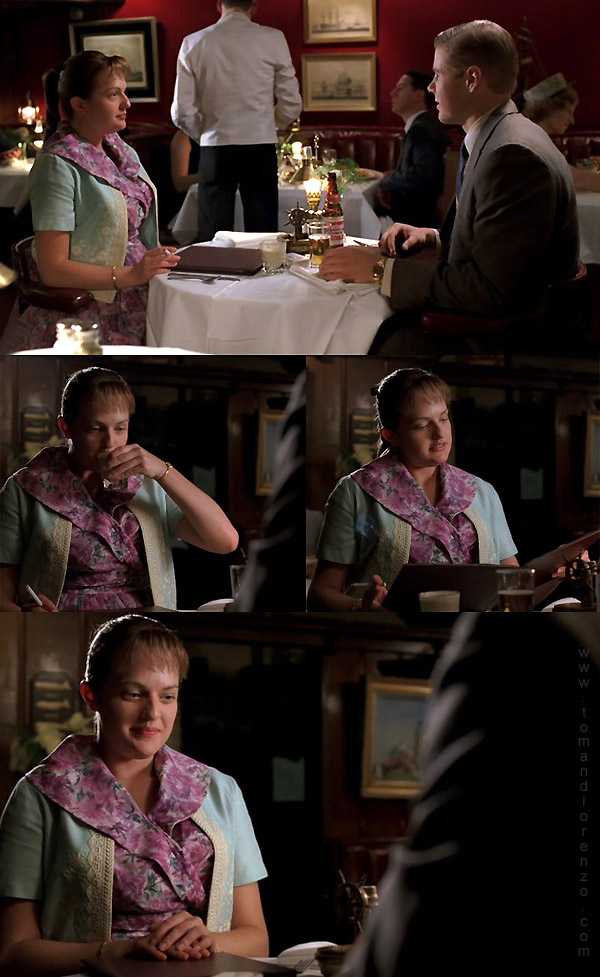 Peggy reluctantly goes on a blind date arranged by her mother. Like most blind dates, it’s uncomfortable and ultimately disastrous. He’s a truck driver and Peggy is way too enamored of the glimpses of Manhattan life she’s been getting on her job to be interested. She winds up trying to impress him and he winds up getting offended by her subtle condescension. They exchange a couple sharp words with each other and she leaves him there.

Not much to say except this outfit is TRAGICALLY ugly and dowdy. We’re even more certain that these frumpy dresses are coming from Mom and Anita. What makes it a little sad is that she tries so hard to appear sophisticated (“There’s this bar in Manhattan where they chill the glasses.”) but she just looks like what she is: a girl in clothes borrowed from her mother on an uncomfortable date. Like we said in the first Peggy installment, she never wears florals. This was a dress forced on her, just like the date was.

Peggy presents her copy to the Relaxiciser account team. As if she wasn’t nervous enough, the men all make the crudest comments possible when Don reveals exactly what it is this little so-called weight loss device does.

Once again, she’s in man’s world and she’s wearing a somewhat masculine gray, this time it’s set off by a feminine pink, which demonstrates how she’s straddling both worlds. This is so frumpy and ill-fitting, that it simply had to have been borrowed from her sister or mother. 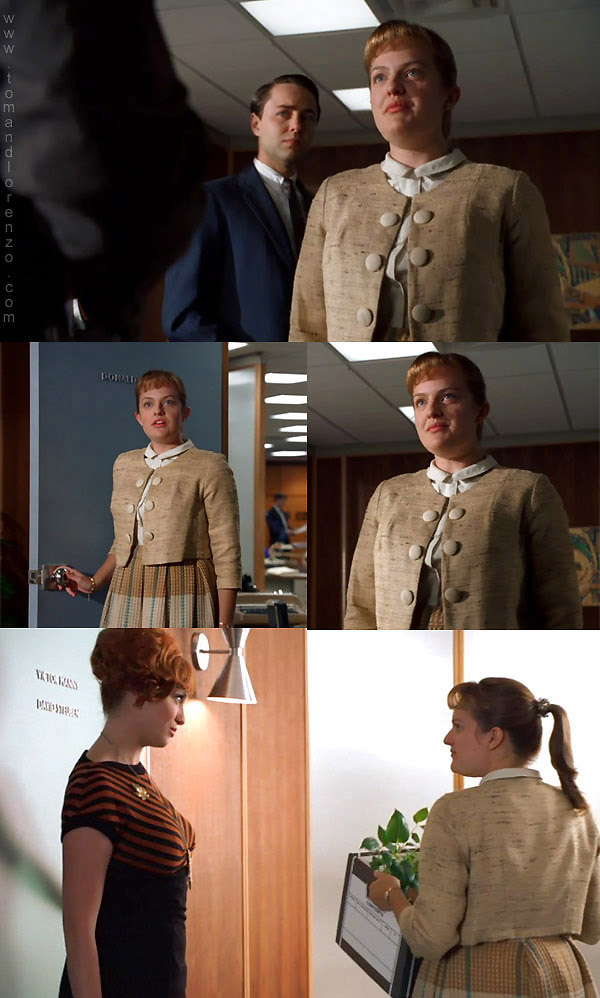 Don impulsively promotes Peggy to Junior Copywriter and assigns her to the new Clearasil account, mostly to piss off Pete Campbell, who brought the account in via his father-in-law. Joan shows her to her new office, but she leaves early because she’s having stomach pains. She goes to the emergency room only to find out, to her shock and ours, that she’s not only pregnant, she’s in labor.

We debated whether or not to include this outfit at all because some of it we’ve seen before (the yellow jacket) and the rest of it’s not particularly notable. Ultimately, we decided to keep it in because even though the outfit’s not all that notable on its own, what happened while she was wearing it were the two most important things to happen to the character. Like we said, yellow seems to be Peggy’s color the way purple is Joan’s.