In many ways, the story of Mad Men is as much the story of Peggy Olson (played by Elisabeth Moss) as it is the story of the tortured Don Draper. Almost all of the characters on Mad Men are stuck in the ’50s or ill-prepared for the upheaval to come of the 1960s. All of them except Peggy, who, despite what was by all appearances a humble upbringing and education, has an almost savant-like ability to observe people and learn from their behaviors. It’s an ability perfectly suited for the world of advertising and, lucky for her, she found an early benefactor in Don, who recognized quite a bit of his self-made self in this unlikely avatar from Bay Ridge.

Unlike, say Betty or Joan, Peggy isn’t really locked into a particular style. She’s definitely the least stylish of all the main female characters on the show, but she also has something of an experimental streak in her because it’s never just one color family or silhouette or style with her. She’s on a journey from the first day she sets foot in the offices of Sterling Cooper and she doesn’t realize it, but it’s a journey that an entire generation of women are about to make with her, and for the first time. Peggy’s clothes are therefore a bit contradictory. She experiments with styles, but only within the fairly strict parameters of her working class Catholic upbringing and her impatience with a lot of the trappings of what was once called “feminine wiles.” She’s feminine and sexual, smart and ambitious, but she’s modest to a fault and isn’t particularly interested in landing a husband or defining herself according to the wishes of men. She’s a revolutionary and she has no idea that she’s one.

As a side note, Tom always had a special fondness for the character because in 1960, his mother, named Peggy, was fresh out of a Queens Catholic high school and working as a secretary in Manhattan for a big insurance company. She’s not a fan of the show because it mostly bores her. In a way we can understand. When the inevitable dramatic examinations of the Reagan years become de rigeur, we can’t imagine it will be of much interest to us either. She also found all the sleeping around a little ridiculous and wanted it known that she didn’t know anything about that sort of thing, and then talked about which churches in Manhattan she liked to visit on her lunch hour. 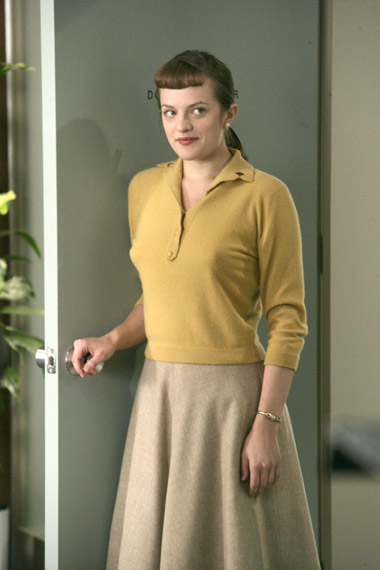 Peggy on her first day at Sterling Cooper, fresh from Miss Deaver’s Secretarial School. She gets ogled by the men in the elevator, shuffled around the office for introductions by an efficient Joan, and ends the day by clumsily and half-heartedly making a play for Don, which he rejects gently, to her humiliation.

She looks young and fresh, but not at all stylish, colorful or sexy, which prompts the charming Pete Campbell to ask her if she’s Amish. Basically, she looks like the Brooklyn Catholic schoolgirl she still is at this point. She stands out against the more colorful Manhattan secretaries.

Joan convinces Peggy to leave the office for lunch and they wind up going out for a bit with a bunch of the guys, who all make clumsy remarks to woo/humiliate her, especially Ken.

It sets the period nicely by having all the men drool over Peggy even though by modern standards, she looks awful. This certainly wasn’t stylish in 1960, but it was passable for a girl from the outer boroughs. To our 2010 eyes, it’s the height of frumpery, something you’d only see old ladies wear. In 1960, it’s modest and practical. Work clothes. The kind of items you’d get a lot of wear out of. The kind of clothes your mom buys for you.

Paul Kinsey stakes his claim and turns on the Kinsey charm. He buys her lunch and gives her (and us) a tour of the SC offices and an explanation of just what it is that everybody does all day.

This is the cutest thing she’s worn yet. Like we said, Peggy’s not really locked into any one color scheme. She’ll wear neutrals and jewel tones, pastels and plaids and earth tones. The only thing you never see her in is a floral. We’re not sure why she was wearing yellow so often in the early episodes except that it set her apart from Joan, who never wears that color.

Peggy is pissed that she has to put up with men constantly hitting on her and says so to Joan. Later she goes into the ladies room to have a cry and realizes that she doesn’t have tears to shed. One in a long line of scenes that illustrate that she’s not like the other women in the secretarial pool, even if she doesn’t understand how or why.

This is Peggy trying to be Joan. It’s a Joan-like purple with a matching scarf (“Men love scarves,” Joan told her on her first day at SC), as form-fitting as Peggy Olson will allow, with Joan-like short sleeves. Unsurprisingly, it looks terrible on her. It’s just not her style. You can really see how, especially in the early days, Peggy was really trying to find her footing, from a clothing perspective. Joan derided her fashion choices almost constantly, so it would make sense that Peggy would (almost certainly subconsciously) make an attempt at a Joan look. 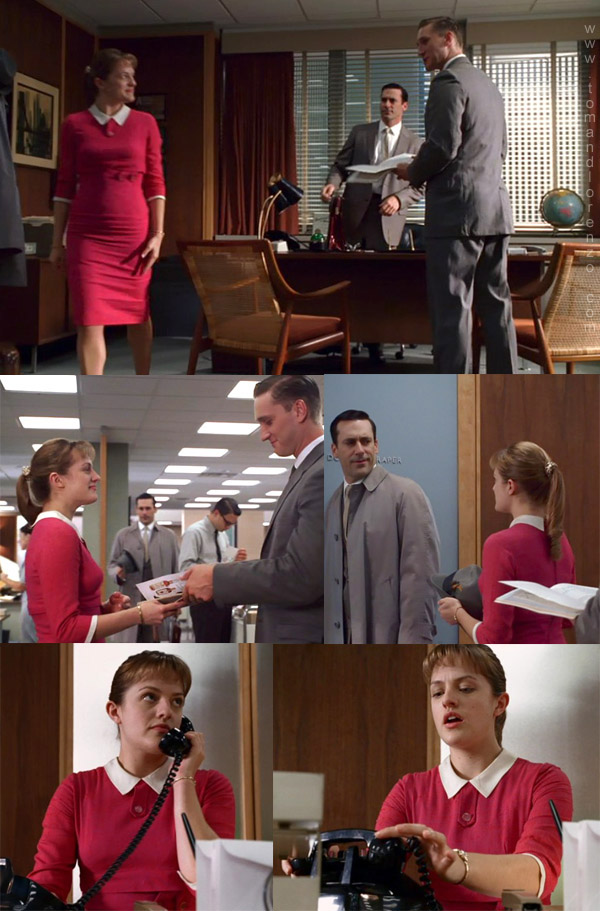 Peggy briskly congratulates Don on winning an award and Ken on getting a story published. It’s the first time you really see Peggy a little at ease with her job. It’s also the first time she has a scene with one of the men and isn’t subjected to any sexual harrassment. Later, she accidentally overhears Midge on the phone giving Don one hell of a proposition: “I want you to pull my hair and ravish me and leave me for dead,” which shocks her good girl sensibilities.

This is actually really cute. Peggy’s clothes look like discount department store clothes, which befits her social station and income level. She didn’t get this at some chic little boutique. She got it somewhere with racks and racks of the same dress in different colors at a marked-down price. Subsequently, a lot of her clothes don’t look as if they were hand-tailored to fit her body, a detail a lot of costumers miss when they’re dressing working class characters. To a lesser extent, you see this with Joan as well, although her clothes look a little more expensive than Peggy’s.

It’s Peggy trying on yet another style. A girly pink, form-fitting in the Joan manner with totally Peggy collar and cuffs.

Betty shows up to pick up Don for a family portrait appointment and Peggy panics, thinking Don is over at Midge’s place. The great thing about these Mad Style posts is the more of them we do, the more of a complete picture we get. We’ve already looked at this scene from both Betty’s and Joan’s point of view.

Again, it’s a slightly different style, a a blue and black checked dress with a full skirt, dropped waist, and the requisite collar and cuffs that are becoming Peggy’s trademark. She’s still got those Catholic schoolgirl touches, but it’s definitely a work outfit, practical and probably durable. 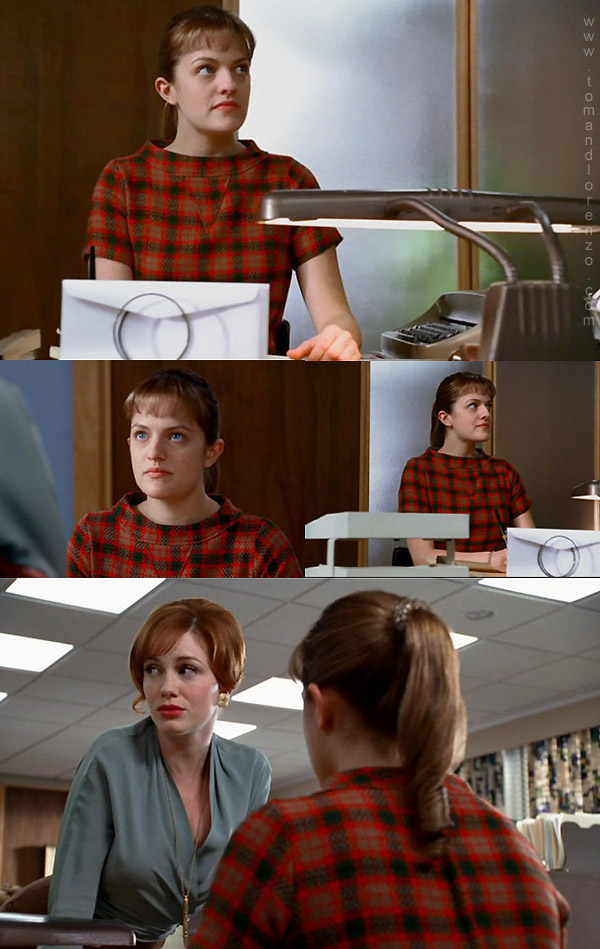 Joan visits Peggy and reminds her that keeping Don’s private life private is the key to any potential success at Sterling Cooper. “That’s my job?” asks Peggy in disgust and Joan just smirks.

This looks like a brand new outfit and yet again, something new for Peggy. It feels more of the moment than a lot of her wardrobe which has too much of a ’50s flavor to it. That type of overblouse would become an early ’60s staple thanks to Jackie Kennedy, who favored them. The plaid and that type of structured collar that sits away from the shoulders are pure early 1960s and serve to make the idealistic Peggy look young and fresh next to the worldly Joan, even though, again, it doesn’t look at all expensive. It almost looks homemade, in fact. 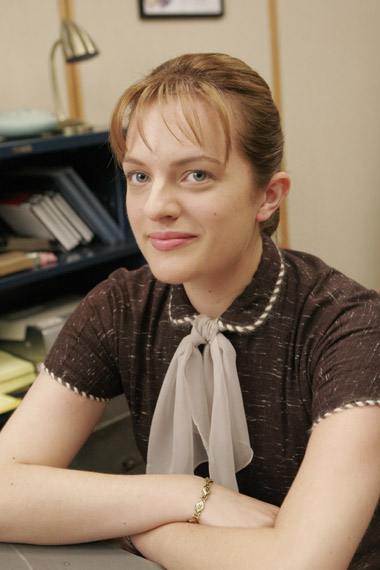 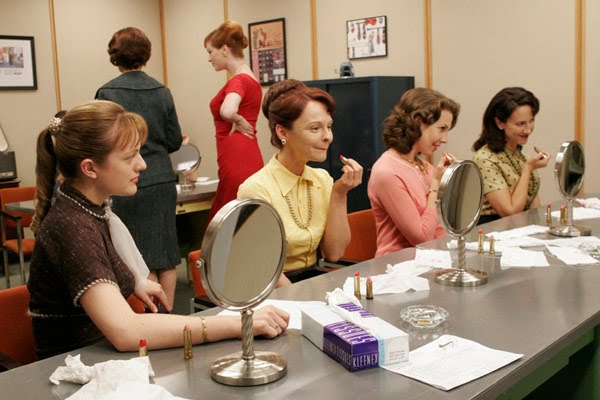 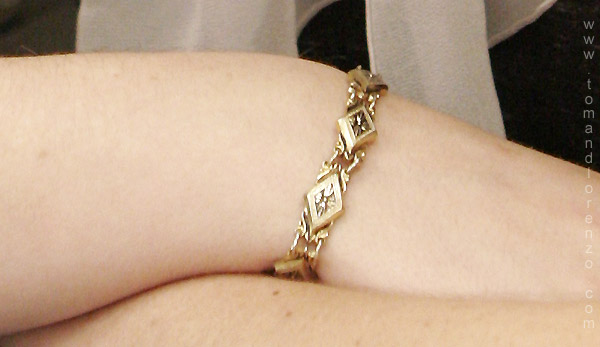 Peggy sits in on the product testing for Belle Jolie lipsticks where she sets herself apart from the other women, to the annoyance of Joan and to Freddy Rumsen’s pleasant surprise. She impressed him so much, she wound up getting her first assignment as a copywriter.

It makes sense that Peggy’s wardrobe at this point would be so uneven. Even if someone is trying to find her style, she’s still got to find something to wear to work every day on a limited budget. This is pure 1950s, from the dark brown color to the striped piping. She probably wore this on her first day at Miss Deaver’s Secretarial School.

Still, despite the fact that it’s not magazine cover fashionable, it serves an important character function as it causes such a sharp distinction to be made between Peggy and the brightly colored secretaries around her who all coo and purse their lips at the sight of the lipstick samples. Peggy in her dark, serious brown (the color of a man’s suit, a signal to her upcoming entry into the men’s side of the business world) is thinking about what their reactions mean rather than joining them in the reaction.