Another busy day for Joan. First, she drops off breakfast for the switchboard operators (because she had a favor to ask them), later she walks into the kitchen to hear the news that Belle Jolie loved Peggy’s copy (at first, she attempts to tease Peggy for not getting the rest of her work done and then she switches tactics when she realizes she can’t get a rise out of her and gives an “above it all” smirk before sashaying out of the lunch room) and finally, she ends the day by doing the twist with Paul Kinsey when everyone decides to go out and celebrate Peggy’s coup.

Okay, explain to us again why Christina Hendricks almost always looks so bad on the red carpet? Granted, this isn’t a gown, but it’s a timeless silhouette and there’s not a reason in the world why she can’t rock the hell out of a simple sheath. In other news, we’re going to have to admit that we were wrong in the previous Joan post when we said she rarely wears pink. As this post will show, she wore it a lot more than we remembered.

Anyway, this is a chic and sexy look for Joan while still being entirely office appropriate. Joan does tight but she doesn’t do revealing. Considering just how large her girls are and how prominently they’re displayed (as if she had a choice), it’s notable that you never see any cleavage on Joan. Not at work.

LOVE those black gloves. And the scarf tied to her purse. In 2010 we’d call a headband with a bow on a woman over 16 utterly ridiculous, but in 1960, it totally works. It seems like a strange thing for Joan to wear, but with the gloves and the belt, she’s got a typically matched-to-within-an-inch-of-its-life Joan ensemble. In fact, this outfit is so over-the-top girly that we tend to think she was dressed this way to highlight the differences between her and Peggy, who is just beginning her entry into the man’s side of the advertising world. 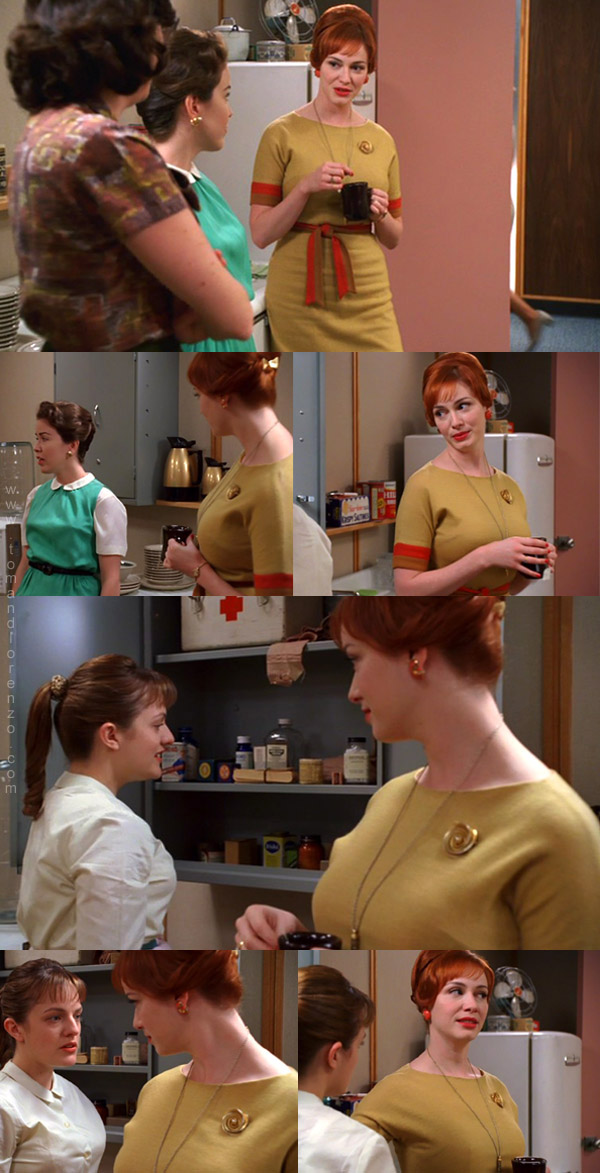 Joan is chatting in the lunchroom with Lois and the Progressive Insurance gal (seriously, that’s her) when Peggy walks in with a sweater tied around her waist because she’s ripped her skirt. First, Joan asks her if she’s “having one of those days” and then she offers to lend her a spare outfit she keeps in the office. 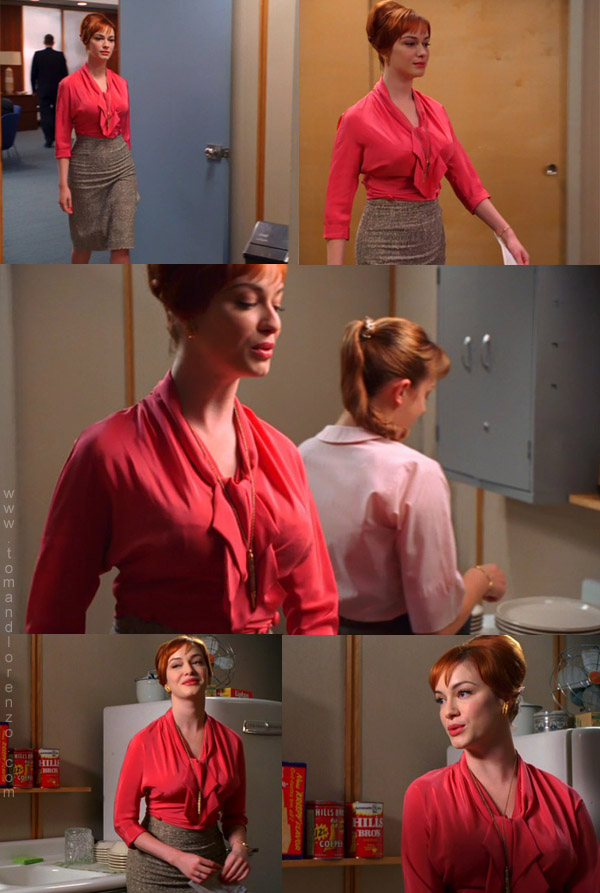 Peggy returns her borrowed outfit to Joan and the two of them have the closest thing this show will probably ever have to a knockdown, drag out bitchfight. Under the guise of giving her advice (and to be fair, she really did think she was helping her) Joan all but calls her ugly and advises her once again to consider a makeover. Peggy gets a little backbone and gives it right back to her, both women acidly skewering the other one’s pretensions and self-image. Even though the entire scene is played at barely above a whisper and even though truthfully neither woman is particularly angry at the other one, it’s an electrifying scene.

Joan: “I know what men think of me.”
Peggy: “Yes, they think you’re here to get married and that you’re fun. And not in that order.”

MRROW! A DELICIOUS scene played beautifully by both actresses. Once again, Joan is in a bright girly pink to contrast Peggy’s dowdier, more intellectual approach to the world. The scene was all about how Joan is the one who’s playing the wrong game here (the game of using your looks to make your way in the world) and it’s not a coincidence that she looks amazing and sexy. We know that Joan is in the wrong but all we can see is that she looks so good.

Roger excitedly informs Joan that his wife and daughter will be away for the entire Memorial Day weekend and they can do whatever they want, including being seen in public. Joan has recently seen The Apartment and is a bit melancholy that she’s found herself the plaything of a married man. Her room mate shows up unexpectedly with the news that she’s been fired. Joan decides the two of them need to get dressed up and go out on the town, getting men to pay for their drinks.

We LOVE this dress, which is a bit of a herald for the mod styles that will come in only a few years. Joan would never wear the mod styles and truth be told, such a graphic dress is a bit unusual for Joan, but she’ll wear a dress that forces men to look at her and this one fits the bill nicely.

The graphic quality helps to highlight some of the emotional turmoil she’s feeling regarding Roger. She’s normally a solid column of color or tone on tone and every now and then breaks out a high contrast skirt and blouse combo, but this is entirely outside her wheelhouse as we’ve come to understand it. Bottom line: the relationship with Roger is getting dangerous from an emotional standpoint (something she’s normally good about avoiding) and it’s reflected in this dress. 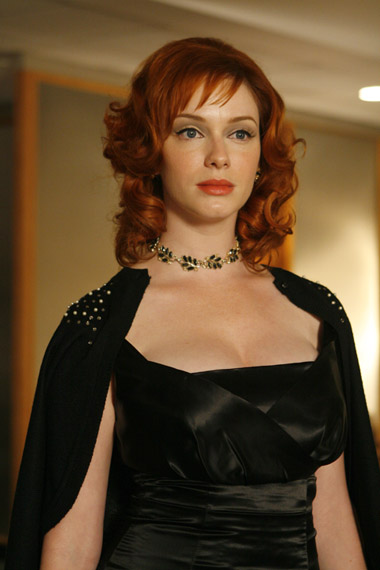 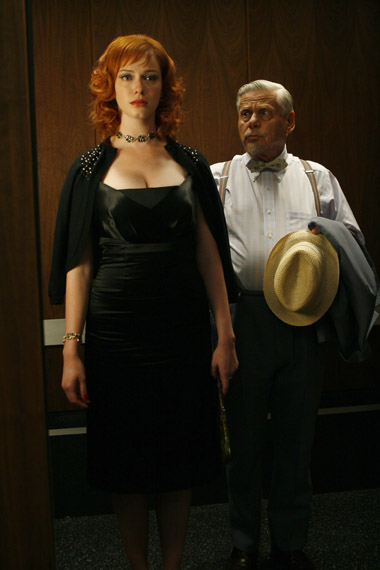 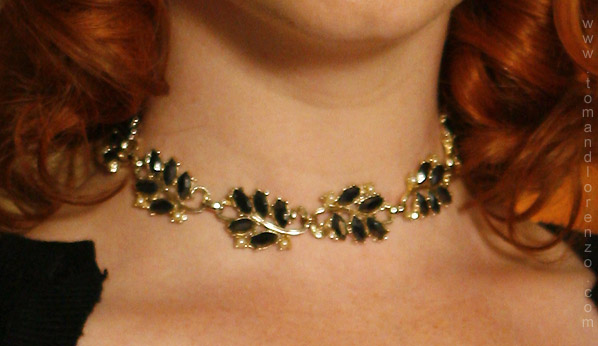 While preparing for their big night, Joan’s room mate confesses that she’s in love with her. Joan is (for once) completely thrown off by this but recovers quickly by pretending it was never said or heard.

Later, the gals bring their (it has to be said: sad) pickups home. Later still, Joan comes into the office at the request of Bert Cooper because Roger has had a heart attack and telegrams need to be sent to the entire client roster. Pointedly, he later tells her not to waste her youth on older men.

ATTENTION CHRISTINA HENDRICKS: The next time you have to appear on a red carpet, WEAR THIS. She looks amazing in this dress and there’s not a thing about it that would make it look dated today (although we’d advise against wearing it with a cardigan). Notably, this is the only time you will ever see Joan displaying cleavage (and what a SPECTACULAR cleavage it is) in the office. Granted, it’s late at night and no one else is there, but it just serves to illustrate how tightly she manages her image.

That choker is gorgeous. 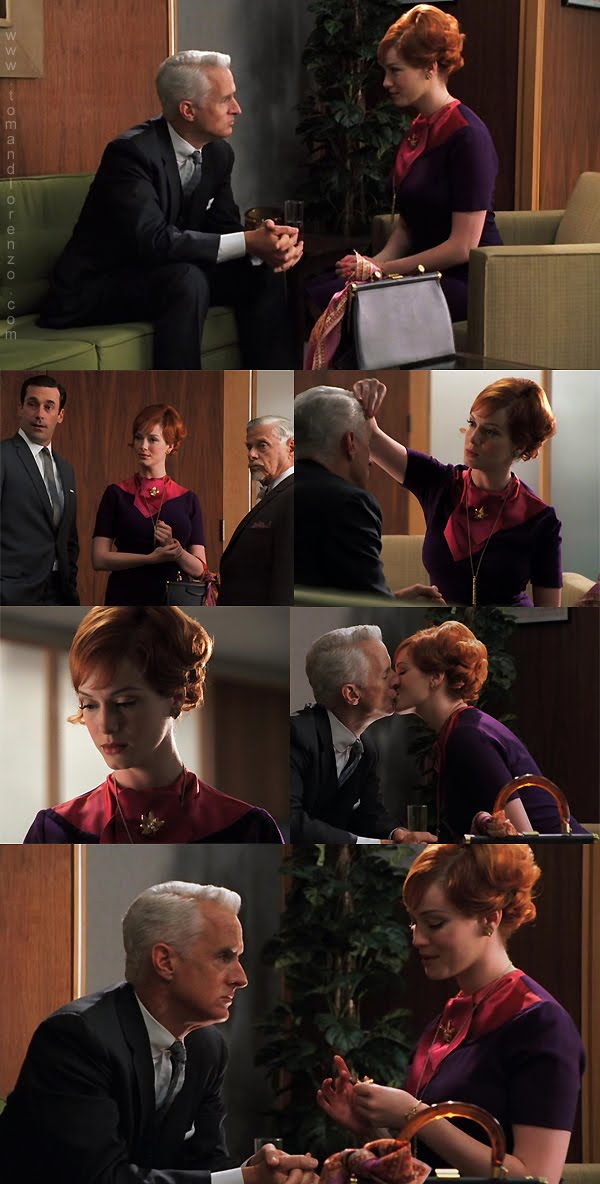 Roger comes back in the office for a meeting with Lucky Strike because they’re nervous about continuity of service after his heart attack. Don and Bert take him to his office first and ask Joan to come in and put a little makeup on his ashen face. What follows is a scene that’s both sweet and a little cold. As Joan makes him up, he waxes rhapsodic about their time together, making it clear that it’s over and also inadvertently making it clear to her that his memories of her will always be about her body and not her as a person.

We’ve seen this outfit before. She wore it in the very first scene when we discovered she was having an affair with Roger. As we said before, purple is an important color for Joan. The color of her heart.

Again with the cute scarf tied around the purse. It’s all about the details with Miss Holloway.

The Sterling Cooper Kids stay up all night in the office partying and watching the 1960 Presidential election returns. Typically, for this group still stuck in the ’50s, they were all rooting for Nixon. Somehow, Ken manages to snag a play that Paul’s written and they decided to put on an impromptu production of it the office. Joan is cast as Sal’s love interest and with one kiss, she figures out what no one, not even Sal’s future wife, ever really figured out on their own. As Joan once said to Roger, “I know men the way you know advertising.”

In the early morning, when most of them are passed out or paired off on office couches, Joan and her former boyfriend Paul have a sweet moment that illustrates the entire history of their past relationship in just a few words.

It’s a striking dress but it stands out to us because of how much it covers her up. Like we said, she doesn’t show off the cleavage, but even for her this is an unusually high collar. Even with such a collar, she still manages the Joan trademark of a scarf detail, this time with that dramatic piece hanging down the back with what looks like her favorite brooch (the rose with the pearl in the center) keeping it in place. We think the payoff for this dress, the reason she was dressed in it, comes with the scene with Paul. When he whines to her to explain why it never worked out for them, she offers only a clipped “You have a big mouth.” When he protests, she cuts him off with another “You have a big mouth.” And he’s forced to admit that he does. That’s why she’s so covered up here. To illustrate that she has a need to remain discreet and “covered” when it comes to the office.

Peggy gets her full promotion to Junior Copywriter and an amused Joan shows her to her new office.

Va Va VOOM. Joan never dressed this way before and she never dressed this way again. Don’t get us wrong, it’s a fabulous outfit, but it basically says “LOOK AT MY TITS” and Joan doesn’t normally trade in such obvious displays. Really, the purpose of this outfit is to draw a bright line between these two characters. Peggy literally got less attractive by the day until she got what she wanted and she didn’t have to use her body or the promise of her body to get it. Joan is still looking for that which she wants (a husband) and she will continue to use her body and the promise of her body to try and make it happen. Two women on completely different paths who both started from the same point. To illustrate that, they needed an outfit for Joan that leaves no question as to her goals and her method of achieving them. Which isn’t to say that Joan is slutty somehow; just that she’s been quite clear with Peggy about using her looks to make her way through the world.