“They taught us at Barnard about that word, ‘utopia’. The Greeks had two meaning for it: ‘eu-topos’, meaning the good place, and ‘u-topos’ meaning the place that cannot be.”
Season 1 Episode 6 – “Babylon”

Rachel meets Don for lunch (which consists of coffee for her and a cocktail for him) to talk about the Israeli Tourist Board account and, more generally, Zionism and Jewish identity.

Pink is definitely her “I feel pretty” color. She wore it to her second meeting with Don (after the first meeting established they hated/wanted each other), she wore it out for drinks when he apologized to her (we don’t have screencaps because you really only get a glimpse of it) and she wore it here. She vascillates between drab or severe colors (especially when she’s at Sterling Cooper) and vibrant, feminine colors.

The only times she wore her hair down was when she was alone with Don (with one final exception that we’ll get to at the end). Obviously, we don’t need to explain why that’s significant. 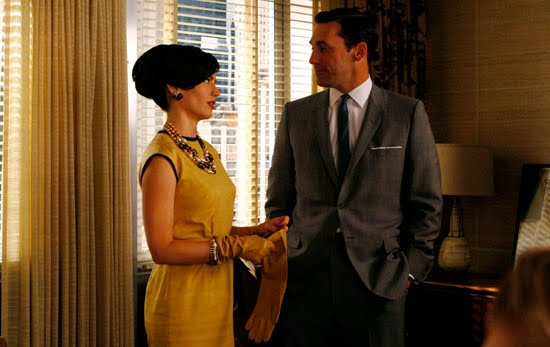 Rachel and her father at Sterling Cooper for the Menken’s Department Store pitch. She’s mostly silent throughout the presentation, only speaking up to defend her father when she thinks he’s being insulted. Very much the subordinate to him. Thoughtfully, she decided to literally blend in with the background of the conference room.

Still, we do love this look. The jewelry is gorgeous and we love the matching gloves.

Rachel finally succumbed to Don’s advances (in a scene where she’s wearing a dressing gown, which is why it’s not included here) and during lunch with her sister has a somewhat lighthearted, teasing conversation about the married goy and how she’s playing with fire.

Bam. She got a little action and suddenly she’s in a vibrant print. If pink is her “I feel pretty” color, then prints are her go-to for when she’s in love (or at least lust). Granted, the hair is pretty severe, but paired with her sister’s pink, the look of the scene is overwhelmingly feminine and upbeat. She’s in love.

After Pete reveals his plans to blackmail Don into making him head of accounts, Don runs to Rachel and practically has a breakdown while begging her to run away with him. She is repulsed by this (“What kind of a man are you?”) and tearfully concludes that what she thought was a relationship turned out to be a cheap affair. She sends him packing.

It’s an unsettling combination of costume traits. She’s in a post-sex-with-Don print again but this time it’s very dark and unsettling. Her hair is down for Don but this is probably the most severe it’s ever looked. There’s conflict and seriousness written all over this look. It’s not a happy look like the lunch-with-sis outfit or a falling-in-love look like her various pink ensembles. It’s practically funereal in its darkness and severity, which is appropriate because everything she thought about Don and her chances with him died in this scene. 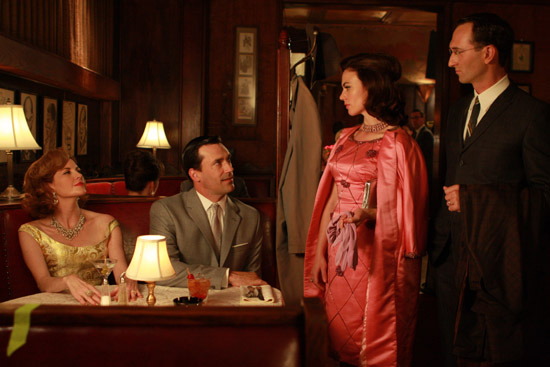 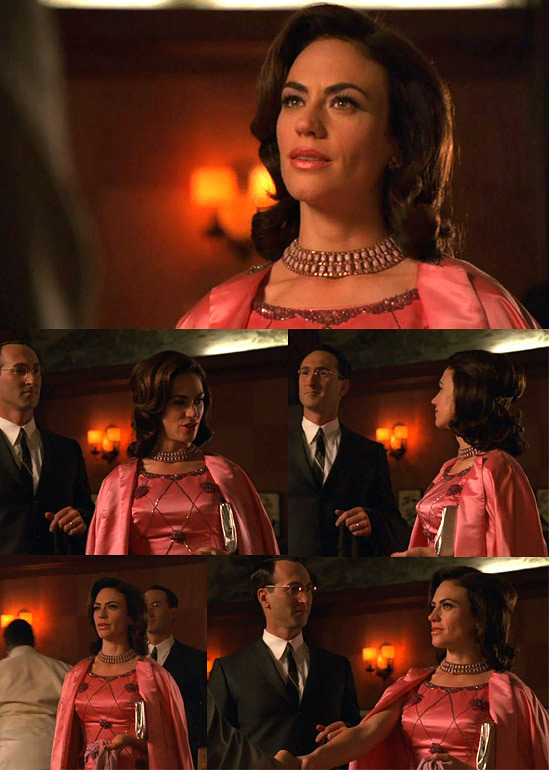 Over a year later, she runs into Don having drinks with Bobbie (a situation she sized up with one look of disgust) and introduced him to her new husband. The situation is awkward and she departs quickly.

This outfit implies that she’s abandoned her career completely to take up the wife role, which would have been common and expected for the times. It’s so overtly feminine and girly that it almost reads as a little silly. All that pink satin. We can’t imagine the Rachel of a year before dressing like this.

To be fair, this is the prettiest she’s ever looked from the neck up. The hair and makeup are much softer than in previous appearances. Pink was her “I feel pretty and girly” color and she wore her hair down only for scenes with Don, so the question is, who is the man in the equation? Is she costumed in pink with soft hair because she’s in love with her husband or does it represent her unresolved feelings for Don?

We’re going to go with the former. She was definitely unsettled to see Don, but she seemed quite happy with her husband and eager to get out of there. Don was more upset about the chance meeting than she was.