That was our honest reaction about halfway through this episode. Why? Because we were pretty sure by that point that this episode might force us to rethink our entire approach to viewing this show. You see, we’ve been big proponents of the “Don’t think about it too much” approach. It ensured that we were rarely disappointed and allowed us to revel in the pure fun of the show without requiring realistic scenes or even realistic motivations and emotional reactions from the characters. To us, Glee has always been a sort of live action cartoon. Well, last night’s episode, a highly anticipated one due to the fact that Joss Whedon was directing it, kind of shattered that idea by offering us a look at just how good this show can be when it tries to be. It showed us that when you give these character real emotions, the show doesn’t suffer for it at all. It showed us that when an episode ends and we haven’t written down one quotable line because snappy one-liners aren’t necessarily what the show’s about, not only doesn’t the show suffer, it actually improves.

Now hold on for a second. We’re not saying we’d be fine if they never went for those insanely funny lines again. We’re just saying that this episode showed us that there’s a lot you can do with a show like Glee and up until this episode, they haven’t been testing the boundaries. We’re also not saying the show wasn’t its usual funny self. There were plenty of quality comedy bits, especially pretty much every scene Neil Patrick Harris was in. 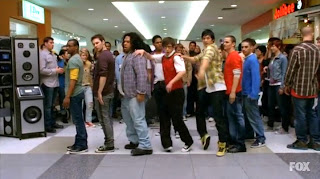 What we ARE saying is that we did something we’ve never done before watching this show. We cried. Twice. But before we expand on that little embarrassing revelation, some setup.

Early on in the show’s run, online fans from various corners of the internet seemed to spontaneously come up with the idea that Idina Menzel should be on the show and she should play Rachel’s biological mother. We wish we could say we thought of it too, but we can only admit it was other people’s idea and it was a damn good one. Additionally, anyone who ever caught Kevin McHale’s moves in his pre-Glee NLT videos could guess that a dream sequence with Artie dancing was pretty much inevitable. The brilliance of last night’s episode was that they took two things that many Glee fans were expecting and managed to exceed all expectations. 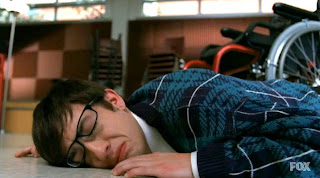 We’ll say it right now, knowing full well we’re going to get some backlash in the comments section: after Susan Boyle’s explosion onto the scene, we hoped we’d never hear “I Dreamed a Dream” ever again. It’s a beautiful song, but it’s become SO. PLAYED. OUT. Well shut our gay mouths, because by the end of Idina and Lea’s number, a brilliant re-imagining of the song as a mother-daughter duet, yes, we were sniffling and surreptitiously wiping our eyes, hoping that the other one wouldn’t notice. Yes, bitches. Cynical and opinionated T Lo CRIED OVER A LES MIZ SONG. We are so ashamed. What’s next? Cathy comics on the fridge?

If that wasn’t bad enough, just as our tear ducts decided to take a break they revved up into high gear the second Artie opened his mouth to sing “Dream a Little Dream.” Kittens, when Quinn put her hand on Artie’s shoulder in a show of empathy and support, we were reaching for the Kleenex. While it’s true that Artie’s own dance number didn’t make us cry, it did provide the setup for the emotional response we had as he watched someone else dance with his girlfriend. Last week’s scene of Rachel singing a duet with Finn’s quadriplegic friend didn’t work for us at all. Too schmaltzy and manipulative. Your mileage may var 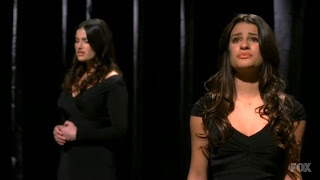 y on this one, but we felt that these two scenes worked far better and more elegantly than that hammer-over-the-head attempt at a tear-jerker.

We can’t reiterate enough that we will be fine if next week’s episode is a return to the live-action cartoon that hasn’t failed to entertain us yet, but having gotten a glimpse of what this show can be, we do hope they keep attempting to explore the boundaries. Last night’s episode proved (to us, at least) that this concept has more potential than we originally thought.

* TAP DANCING! How is it that we never noticed this show’s glaring omission of tap-dancing before? Tina and Mike were adorable together. 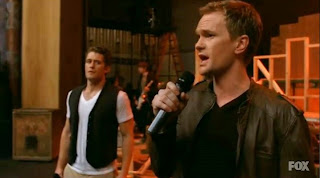 * It’s ABOUT DAMN TIME they gave us some Artie and Tina. We were starting to get pissed at their exclusion since the show came back from hiatus. In fact, one of the other things this show proved is that you can juggle multiple storylines with multiple characters and the show doesn’t suffer for it. It’s fine if they want to showcase Rachel every week, but now we know you can do that AND showcase other characters.

* Which reminds us, it was nice to see Emma again – and for once, she wasn’t acting like a cartoon character but a real person. Her scene with Artie was another heart-breaking scene.

* Geez, we’re making it sound like this episode was depressing but it really wasn’t. Attention must be paid to Neil Patrick Harris, who knocked it out of the park as the bitter Bryan Ryan, a character second only to Kristen Chenoweth’s April Rhodes as best guest star ever. His mullet and Cosby sweater in the ’80s flashback was hilarious. And speaking of the ’80s…

* Attention must also be paid to the fine directorial efforts of Joss Whedon. Shooting that 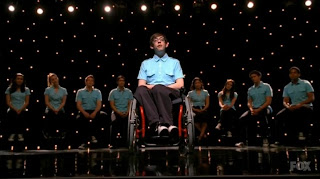 Safety Dance number as if it was being performed by a flash mob was a stroke of genius.

* Rachel won her first singing competition at 8 months of age. What can we add to that?

* The total absurdity of singing Dream On on a half-built Les Miz set was somehow brilliant. How does THAT work? Maybe we were just impressed with the duet and relieved to see Will do something besides white boy rap.