Well before the seismic changes that characterized the end of season 3, the changes in both Trudy and the Campbell marriage were evident from the very first episode on. A marriage that formerly appeared to be little more than a disaster somehow righted itself and became a true partnership decades before such an idea became the norm. These changes were, of course, reflected in her costumes.
Season 3 Episode 1 – “Out of Town” 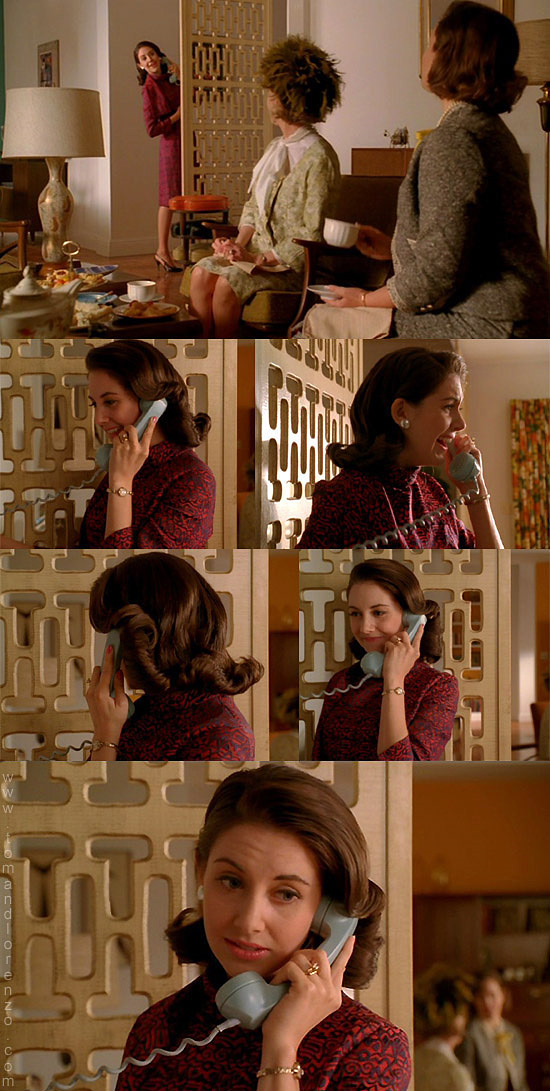 After doing a little victory dance in his office, Pete calls Trudy (who’s in the middle of her own social-climbing activities: entertaining some docents) to inform her that he’s been made head of accounts. She is thrilled and supportive, but wisely suggests he not turn to his mother for any validation, knowing how disappointed he’ll be when he doesn’t get it.

In previous seasons, Trudy’s household wear was stylish, but still housewife-y. Shirtwaist dresses and twinsets that more often than not literally matched the furnishings. We will see her in such outfits again, but in this, her first scene in S3, she’s in a smart suit in a standout color. Contrast her look with the neutral tones of the ladies she’s entertaining. She is thrilled and supportive of Pete’s good news, but cautions him about his emotional expectations. It’s terribly retro, but she has a career now and that career is being Pete’s wife. Pete’s holding up his end of the bargain by advancing his career and she’s holding up hers by advancing their social standing. We can judge that by 2010 standards but it would be a mistake to do so. By 1963 standards they have the most modern marriage of anyone on the show.

Later, she visits Pete in his office and comes face to face with his petulant anger over the discovery that he has to share the position with Ken Cosgrove. She soothes him, but more importantly she gives him some important career advice: “Don’t let them see your anger.” She knows her husband well and she knows what he needs to be steered clear of.

A perfect summation of her role in costume form. From the neck down, a smart suit that could easily function as business-wear. From the neck up, a ridiculous and frivolous hat, although a very stylish one for the time. She is both wife in the traditional sense and partner in the modern sense. And again, her new standing means she no longer fades into the background. She stands out. 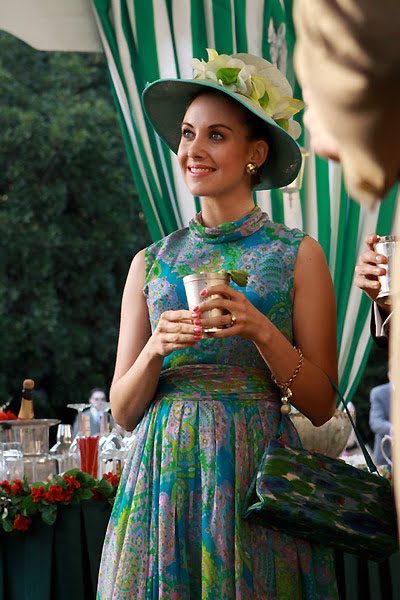 And speaking of not fading into the background, here she is at the Sterlings’ Derby Day party, dressed for attention. In a scene loaded with color and prints, she still managed to stand out.

And standing out was the Campbells’ Number One goal in this scene. They were depicted as flawless party-goers, able to flit from conversation to conversation, much to the consternation of the fumbling, awkward Cranes. Pete and Trudy (both dressed in shades of green, purple and blue) wowed the crowd with an eye-popping Charleston that only could have been achieved through hours of practice and lessons, which speaks of both their childlessness and their voracious appetites for social climbing. Costume designer Janie Bryant has said that she chose a dress that could evoke the styles of the ’20s without literally recreating them. We think she accomplished that. A ’20s dress would have had a much lower waist and a looser bodice, but the straight vertical lines of the silhouette and the airy, floaty skirt looked completely appropriate for a Charleston number. In addition, the super-modern print takes it away from being too literal and once again cements the Campbells as a modern and forward-thinking couple.

Trudy comes home from a summer weekend away from the city only to have Pete tearfully confess that he wasn’t a good husband. He slept with (raped, but they wouldn’t have thought of it in those terms) their neighbors’ nanny. She is visibly hurt by this but eventually forgives him and they come to an understanding that Pete needs Trudy to keep him away from his darker impulses. Again, not a healthy marriage by 2010 standards, but far more equitable than a lot of marriages of the period. Just try and picture Don and Betty having a conversation like this.

J’ADORE THIS OUTFIT. It’s sassy and modern and every inch the young Manhattan wife of a rising advertising executive in 1963. The chic simplicity and comfort are appropriate for vacation clothes, but they also serve to once again show how forward-thinking she is. Almost 50 years later and any gal her age could take this outfit and rock it 21st Century style. It’s also notable because it’s heralding the shift away from the rigid clothing of just a year or two before. It won’t be long before the girdle and longline bra are relegated to old lady wear.

Massive head scarves really do need to make a comeback, wouldn’t you say?

The Campbells are miserable together. Just look at Trudy’s exquisite pouting. Pete has been passed over in favor of Ken Cosgrove for the permanent head of accounts position, shattering their career and social plans. In addition, the Kennedy assassination is playing out on their TV and even though they were, in all likelihood, not Kennedy supporters, the young couple are nonetheless saddened by the events and disgusted that Margaret Sterling’s wedding is still going forward, their attendance expected. At first she resists his idea that they should skip it, but she comes around quickly to his thinking, plopping herself down on the couch in her party dress and slipping off her DTM shoes.

This was the scene where we really kind of fell in love with the Campbells, having formerly found them to be just a little unbearable. The Sterling wedding would have been one of the highlights of their social obligations for the year and despite their plans and goals, they’re smart enough to realize that going would be tacky, especially in light of Sterling Cooper’s snub of Pete. As they stand up for each other, they never looked better as a couple. Look how brilliantly she stands out against the colors of the room that used to swallow her up. Look at how his tie subtly matches her dress. They’ve really come into their own, which is one of only two options when life knocks you down. 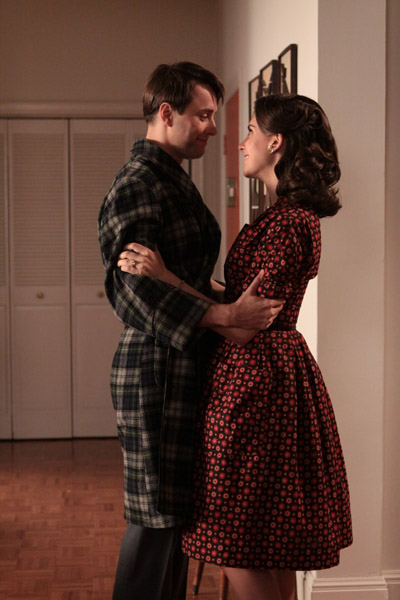 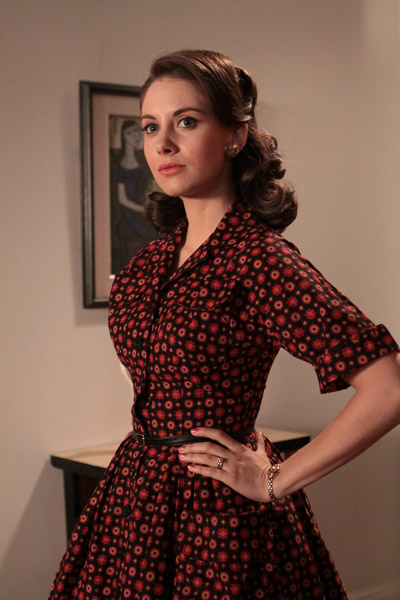 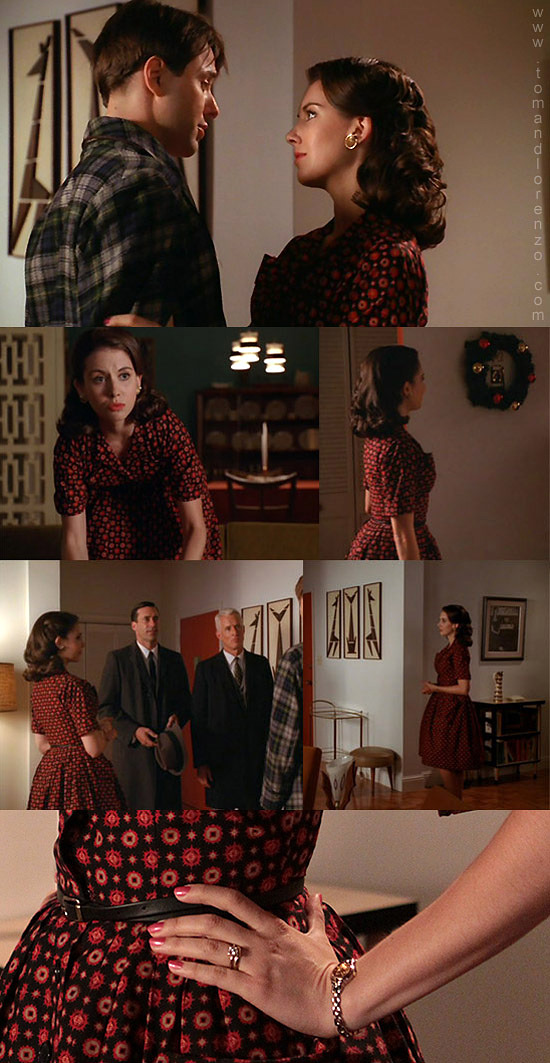 Love this outfit too. It’s a housewifely shirtwaist dress, but in a really kicky print. Don and Roger drop by with little warning to coax Pete into following them as they form a new company. Like a good wife, she leaves them alone to their man talk, but like a modern partner, she’s right there doing her job the minute the door closes behind them. Pete assigns her a couple of tasks and they each march off in different directions, excited, with jobs to do and a newfound purpose. Unlike, for instance, Betty, Trudy knows an opportunity when she sees it and she understands exactly how big a deal this is for Pete and by extension, for her. She will do whatever she has to to make it happen.

We don’t think there’s much to say from an analytical perspective. Like we said, it’s housewifey, but it’s stark and stands out, like most of her wardrobe this season. She no longer matches the walls or the drapes. 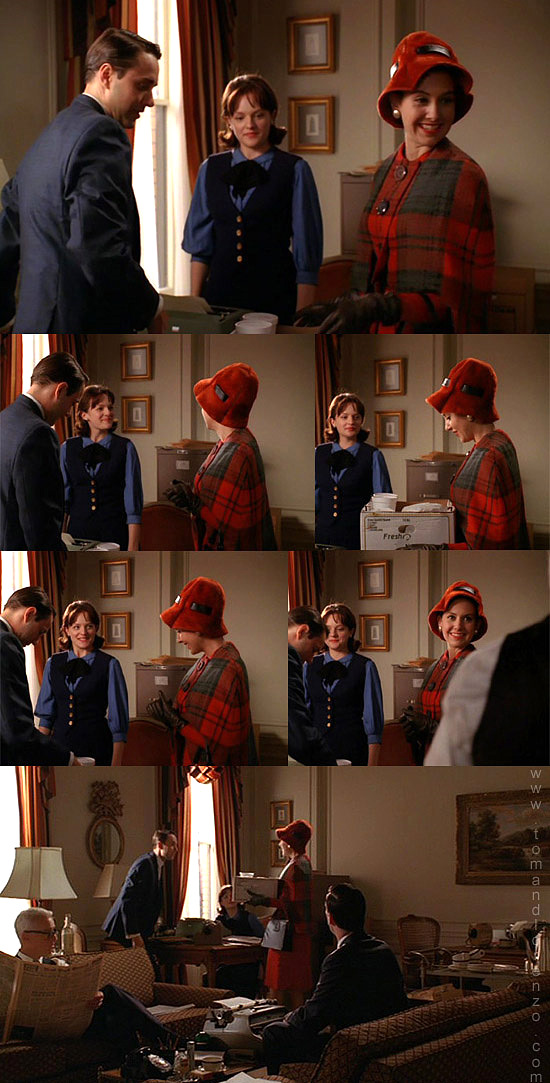 Trudy stops by the temporary offices of the newly formed Sterling Cooper Draper & Pryce with sandwiches for the whole crew. It’s supportive in a wifely manner, but it also places her firmly in the middle of the office. Think about how Pete used to react to her when she stopped by the SC offices. When he wasn’t yelling her out the door, he was gently shoving her out the door. Here, she’s welcome not just by Pete, but by everyone.

Even though she’s dressed like a gigantic Christmas decoration – and it’s December 1963 here; you know damn well that she has several variations of holiday-themed outfits in her closet – there’s a certain maturity to the clothes. Still modern and bold, but with a more grownup feeling. Take away the hat and switch out the bold plaid for a solid color and this could have passed for one of Bobbie Barrett’s super-stylish getups. And look how much she stands out in the scene. No one even comes close to pulling the eye the way she does. Peggy and Joan (who you can’t see in these screencaps) are in serious blues and blacks, just like the men, but Trudy is all bold and bright. She’s gone on a journey as much as anyone else in that room and she’s in the best place she’s ever been.