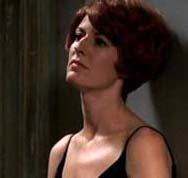 You wouldn’t think so, but doing a retrospective of Don Draper’s S1 girlfriend (“mistress” doesn’t quite seem to apply) Midge Daniels (played by Rosemarie DeWitt) was much harder than we thought it was going to be, partially because she’s not in that many scenes and partially because, unlike a lot of the other female characters, her clothes aren’t really that important to her. And besides, most of her scenes were just before or just after sex with Don, which means she was partially dressed in a lot of them. Besides, compared to most of the other female characters, she was pretty much a cipher. We knew virtually nothing about her except that she was a beatnik, living far outside the norm for her time.

We originally thought of doing a combination Midge/Suzanne post, to compare the two Boho chicks with each other, but that didn’t quite work either. For one, Suzanne essentially had one outfit in different prints or colors, and for another, she wasn’t nearly as Bohemian as people tend to think. Her style was very much that of a suburban elementary school teacher. Cute little cotton dresses and that’s about it.

So we dropped the Suzannne idea at the last minute and decided to focus on Midge. Right off the bat, there’s an issue. Because she wasn’t about ensembles the way a lot of the other females are, there aren’t many shots depicting her whole outfit. Joan, Betty, Bobbie, Rachel and even Peggy all got the full shot – from head to toe – when they enter scenes. The director wants you to see their clothes because they’re gorgeous and because they instantly place you in the period.

The “problem” with Midge is, her clothes don’t really do that because she was a Village beatnik of the period, which means her clothes were for the most part, very modern. A woman in 2010 could wear almost anything she wore and not look dated.

To our way of thinking, history has placed too much importance on the hippies and not enough on their older cousins, the beatniks. There wouldn’t have been hippies without the beatniks coming first. They were leading the charge against the dominant paradigm at a time when doing so was far more daring than it would be as little as ten years later. Women, gays and African-Americans had value and standing in the beatnik community (although they weren’t always treated well), which makes them so forward-thinking it’s almost mind-boggling.

This is all a long way of saying that, try as we might, we just couldn’t really get into the kind of analysis the previous Mad Style posts engaged in. Midge was a beatnik and completely unlike any other woman on the show. That’s all you needed to know about her and the clothes served to point that out again and again. Still, we think she’s a very important character in Season 1 and a dead-on representation of the time and place: Greenwich Village in 1960.

Here’s our introduction to Midge. Don shows up after spending the night in bars trying to come up with a pitch for Lucky Strike and failing. At this point, we don’t even know that Don is married, so we’re meant to assume that she’s just a girlfriend. We don’t meet Betty and the kids until the last minute or so of the episode, making everything we saw in the previous hour a little more shocking.

There’s little to say about this outfit. It’s very much of the time and place. A men’s shirt and a pair of capri pants was practically a beatnik chick uniform. Compare this to literally any other woman’s outfit on the show and you can see just how far outside the norm she is. She only occasionally wears a bra and never wears any of the other undergarments that were required of women of the time, no girdle and no stockings. 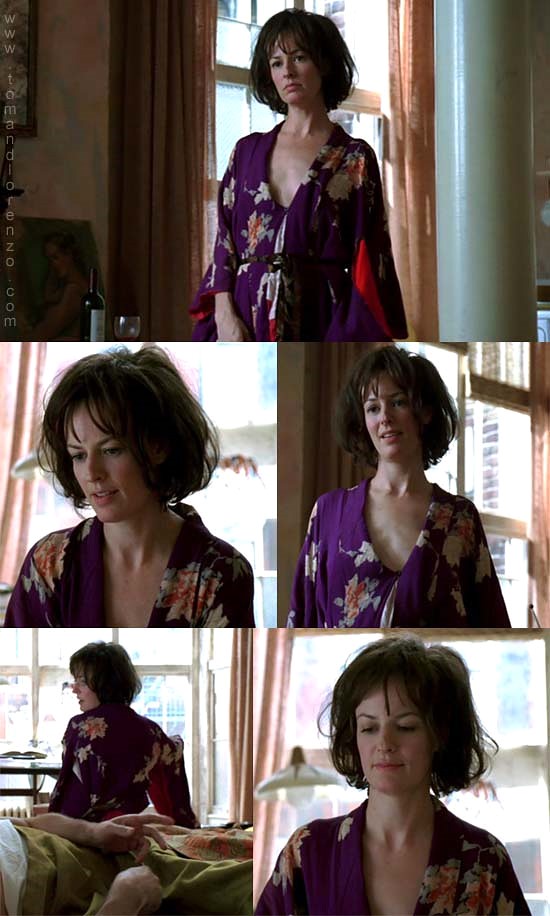 Don gets annoyed with her for having a television set and not telling him where she got it. The implication being that Don is attracted to her precisely because she’s so outside his milieu. In a bit of flightiness, she picks up the TV and tosses it out the window to prove her counterculture bona fides to him.

Again, you have to put yourself in the period. This is a gorgeous kimono but they certainly weren’t as prevalent as they are today. The kimono really entered the American fashion scene after GIs returned from the war in the Pacific, but it was considered a daringly sexual look for decades. After all, what kind of women were GIs exposed to when they were overseas? Prostitutes. Middle-class wives like Betty or good girls like Peggy would have never even considered the idea of wearing one. Joan might, but she’s pure American sex appeal all the way, so the idea of it probably wouldn’t have appealed to her. 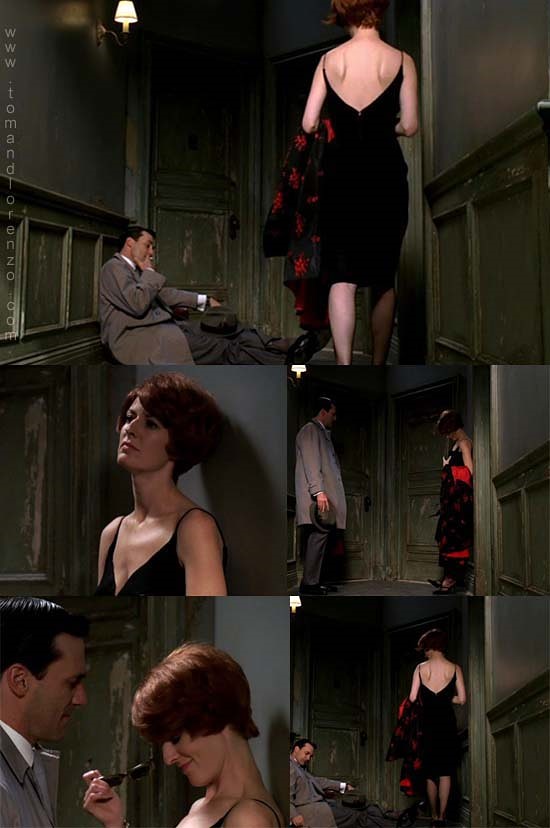 Don shows up unannounced after dropping Betty off at her first therapy appointment in the city. Midge is just coming in from a night out, still a little drunk, and snaps at Don for mentioning Betty to her.

This outfit kind of puzzled us because she looks so dressed up and stylish, which doesn’t seem like Midge at all. Granted, she’s not wearing a bra, but it’s still more sophisticated than anything else we saw her wear. We don’t think she was necessarily a prostitute, but this scene did give off the vibe that she was a “party girl” of the period in the Holly Golightly mode. 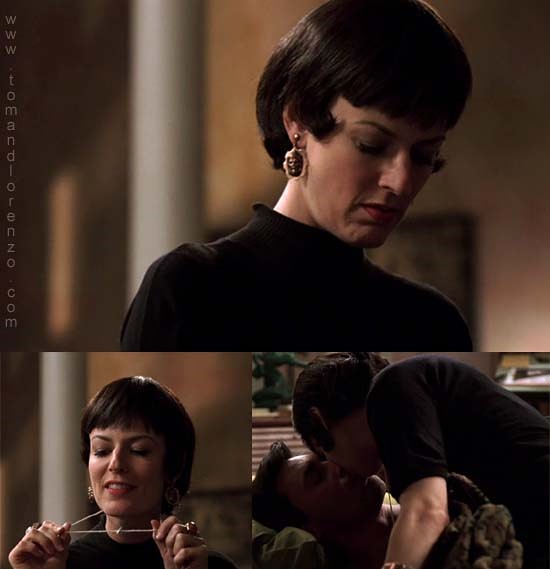 You don’t see much of this look, but it’s so dead-on for the period. The wig with the severe bangs, the all-black ensemble, and especially the heavy “ethnic” jewelry (African and South-American-inspired. Essentially, jewelry made by non-whites. Hey, don’t look at us. We didn’t come up with the term). You can find countless pictures of the period of beatnik women dressed exactly like this. 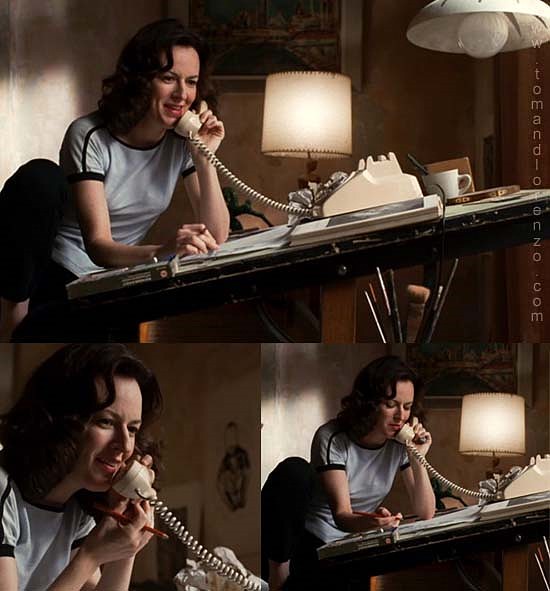 Midge makes a middle-of-the-day booty call to Don at the office (“I want you to pull my hair, and ravish me, and leave me for dead.”), which is accidentally overheard by Peggy when she picks up the phone.

There can be no more glaring example of just how far outside the mainstream Midge was for the period. To modern eyes, there’s nothing wrong with a gal in a baby tee and no bra. Put yourself in 1960. This might be a tiny bit of hyperbole, but she could have risked arrest going out like that. They didn’t even make tee shirts for women back then, let alone baby tees. This is almost certainly a boy’s tee shirt. A grown woman wearing a boy’s tee shirt while Eisenhower was in office was a very bold woman. It’s the equivalent of a gal with a safety pin through her nose and a mohawk in 1976. 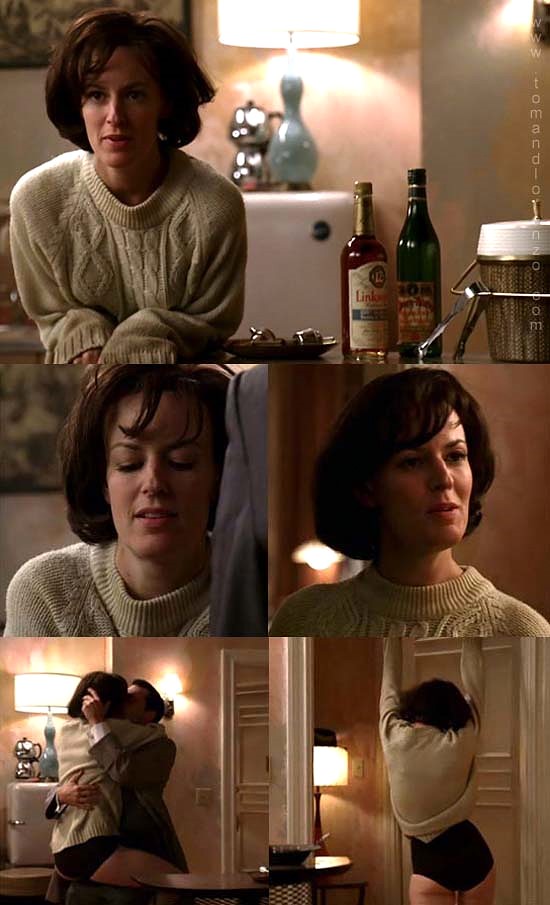 We kind of love this look because it reminds us of candid shots of Marilyn during her Actor’s Studio days, which was more than likely intentional considering Midge’s very Marilyn-esque wig. 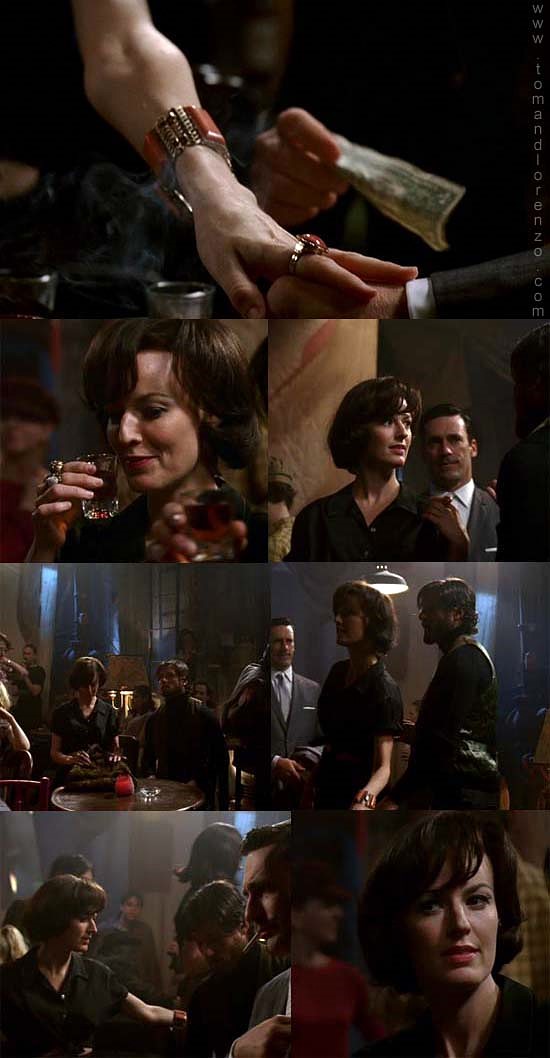 Midge and some friends go out to a beatnik club (complete with poetry and finger snaps) and Don comes along.

Again, it’s practically a beatnik uniform. Check that jewelry. Can you picture any other woman on the show wearing anything like it? Betty would have found it hopelessly vulgar, Peggy would have been shocked and confused by it, and Joan would have thought it a poor way to accessorize. 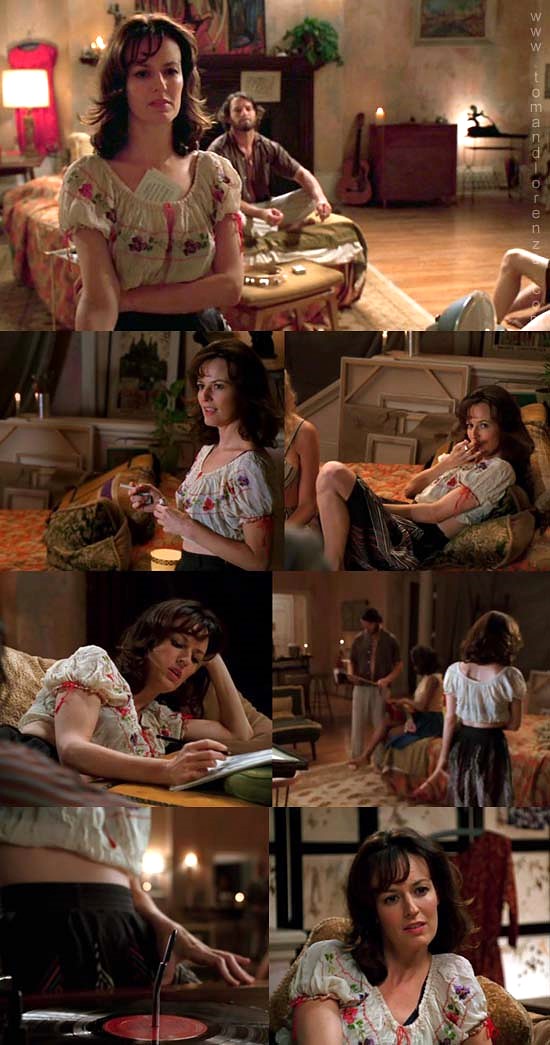 Have we mentioned how much we love her apartment? We can’t help thinking if such an apartment still existed in 2010, it would probably be worth several millions of dollars at this point; a fact which would have made the Midge of 1960 laugh uproariously at the absurdity of it.

Don spends the evening with Midge and her Boho friends smoking pot, which results in a flashback to his childhood and the establishment of the theme that defined his character from then on: A hobo who can’t stay tied down for long. He tries several times to convince her to hop on a plane with him to Paris. After he realizes she’s in love with one of her friends, he slips the $2500 bonus check he got from Bert Cooper into her peasant blouse and says goodbye.

It’s ironic (and could possibly have been a rather brilliant bit of long-term foreshadowing) that in the episode where we find out about Don’s past entitled “The Hobo,” Midge is essentially dressed like a gypsy. Remember, 2 seasons later, Don is finally forced to reveal his past to Betty in an episode entitled “The Gypsy and the Hobo.”

This is a sexy, carefree look; perfect for wearing on those pot-smoking days. The exposed stomach and the glimpses of her dirty bare feet really sell the look as one of an artist and libertine.

Unlike all the other women he bedded, Midge didn’t really care about Don all that much. In fact, she didn’t even respect him. Rachel and Suzanne loved him, Bobbie used him for sex but you could tell she respected the hell out of him. Midge treated him with disdain because of his job and his (on the surface, at least) middle-class values. There wasn’t a chance in hell that they’d have a future and she knew that before he did. She’s only slightly disappointed at his leaving and even that had more to do with the sex than any feelings she might have had for him.

This scene is notable for the ways in which it shined a not-particularly-flattering light on the beatniks. Don acidly skewers their pretensions and values and the scene showed (in a rather heavy-handed manner) that the male beatniks could be just as sexist as the middle-class men they hated so much. As such, the clothes in this scene bordered on parody: the guy with the unkempt beard, beads, and open shirt, the other guy in the fez, the girl inexplicably wearing a bikini. Midge’s gypsy getup was the most over-the-top and costumey of all her looks and that’s no coincidence given the point of this scene.