Rather than do another Rachel Menken post, we thought we’d continue our look at Mad Men fashion by taking a moment to examine one of our favorite characters on the show, from both a personality and a fashion perspective. Costume Designer Janie Bryant has said that Trudy is one of her favorite characters to dress because she’s rich, urban, and young, which means she wore some of the most of-the-moment looks on the show.

In terms of costuming, Trudy Campbell (played by Alison Brie) is an interesting character to look at. She was little more than a peripheral character in the first season, there to provide some home-life drama for Pete that often mirrored his work-life drama, a tool for stories rather than a character in her own right. Subsequently, her first couple of appearances are quite different stylistically than the look she would later evolve into.

Like most of the married couples on the show, Pete and Trudy exist as a comparison to the Draper marriage, much like Mona and Roger Sterling do. All three marriages basically tell the story of one marriage at different stages of life; an ambitious ad man and his pampered wife. Trudy is restless and ambitious, Betty is bored and frustrated, Mona is cynical and buried her pain very deep a long time ago. 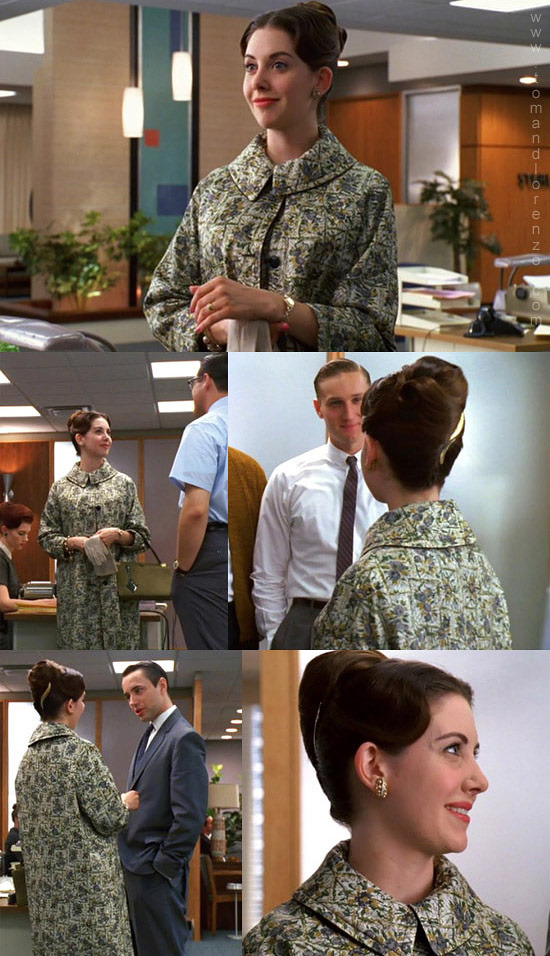 This is our introduction to Trudy. She shows up at the SC offices unexpectedly to drag Pete away to look at an apartment. The scene is played in such a way as to make her seem incongruous in the office. Everyone stammers around her and tries to say nice things about Pete to her.

The somewhat aggressively ugly print and sack dress-inspired silhouette of this coat do two things: it sets her apart from the secretarial wear of the office (mostly twin sets and pencil skirts or Chanel-like suits) and it sets her apart from Pete, who’s rendered all in solid blue. It’s conflict in coat form.

Two other notable things: Quite often (but not always) Pete and Trudy’s outfits match each others in subtle ways, as the blue of his suit picks up the blue in her coat. It cements them as a partnership, even when they look so oppositional, as they do here. Also, one thing we do love about the costume design on the show is that they’re not afraid to go there. Everything about this look reads as ugly to modern eyes, from the eye-searing print to the dowdy hairstyle. And yet she’s presented (and totally believably, we might add) as a young, fashionable wife in the city. 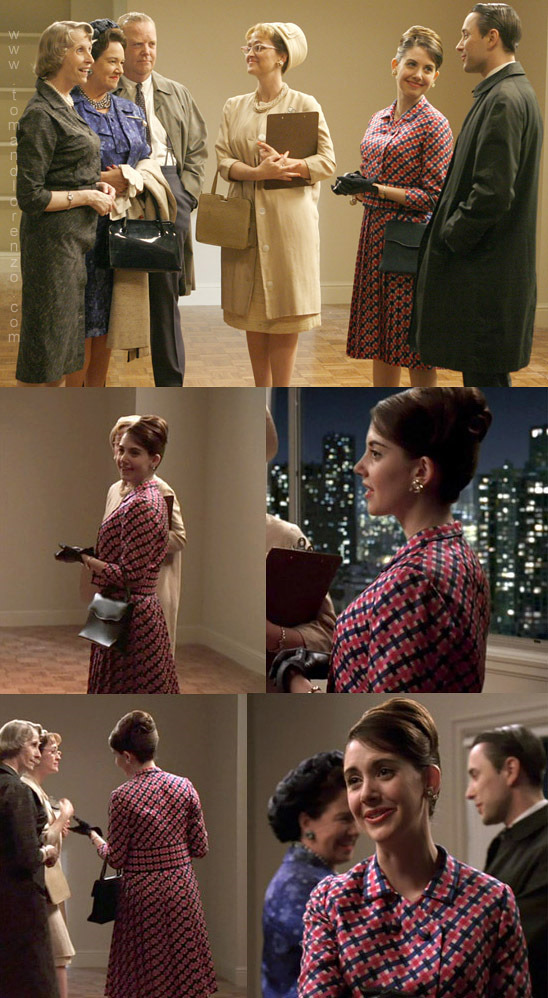 Later in the episode, after her parents agree to pay for the apartment. They’re meeting the neighbors and generally oohing and aahing and making a lot of cracks about a baby nursery.

There’s not a lot to say about this look. It’s a relatively brief scene that was more about Pete than about her. You really have to place yourself in the time (it’s 1960 here) to understand what this outfit says about her. The bright plaid was a fairly fashion-forward look for the time. It’s easy to compare Trudy to Betty since they’re somewhat similar in their goals and background, but Betty would die before wearing something like this. She’s far more traditional and suburban and settled. This is a young, newly married, affluent, urban woman’s look. It’s notable that the two characters who wear plaid the most are Trudy and Peggy, who, for awhile at least, stood in opposition to each other for Pete’s affections. 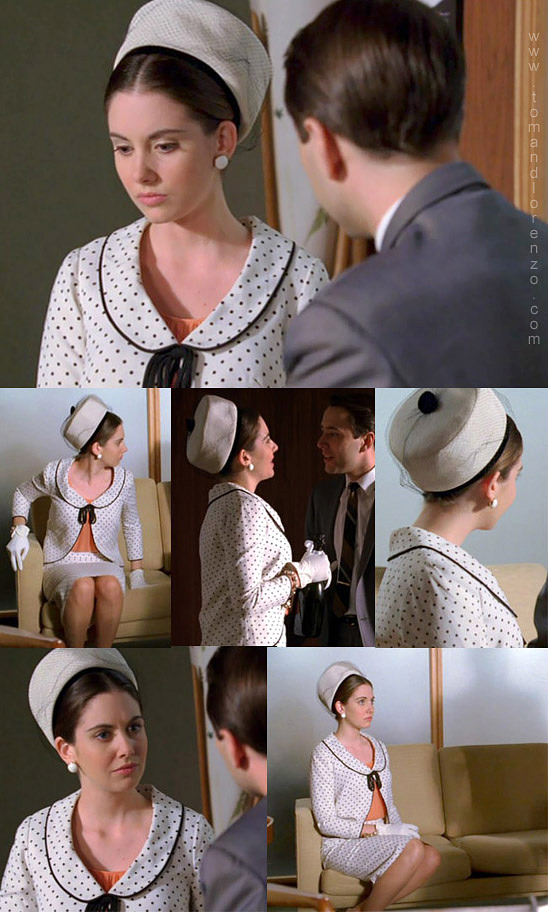 Here’s Trudy on the day they make settlement on the apartment, feeling celebratory.

This is the most frivolous look we’ve seen on her yet. It seems as if which each appearance on the show, they got closer and closer to the quintessential Trudy look and this is when they locked it in. Very fashionable, expensive-looking, youthful and urban. Again, she’s wearing a pattern and the first in a long line of fabulous-bordering-on-ridiculous hats.

Costume designer Janie Bryant has said many times in interviews that she takes into account not just the character, but the setting when choosing or designing clothes. Sometimes Pete and Trudy match each other, and sometimes Trudy matches the background, as she does here. In fact, it’s a trick she’s done with Betty as well. Probably a statement that wives like Betty and Trudy were expected to fade into the background. 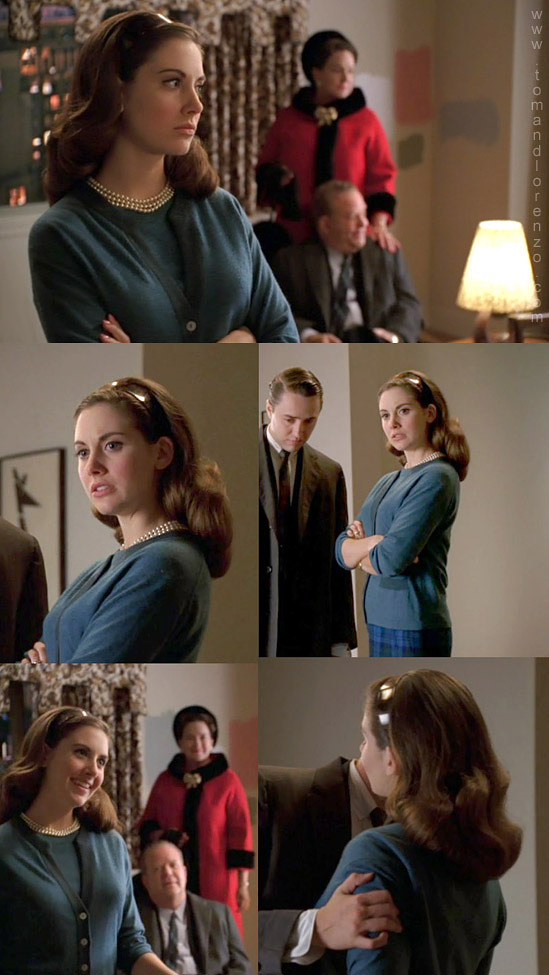 The tensions in the Campbell marriage escalate as Pete comes home drunk to find his in-laws there. Trudy does her best to comfort him and once again the baby thing rears its head.

Here she is stuck at the halfway point between daughter and wife. This is easily the most youthful she’s looked on the show yet. The hair is soft and girly, the twinset is pretty and uncomplicated. The headband and the plaid skirt only add to the schoolgirl feeling of this outfit.

Season 2 Episode 1 – “For Those Who Think Young” 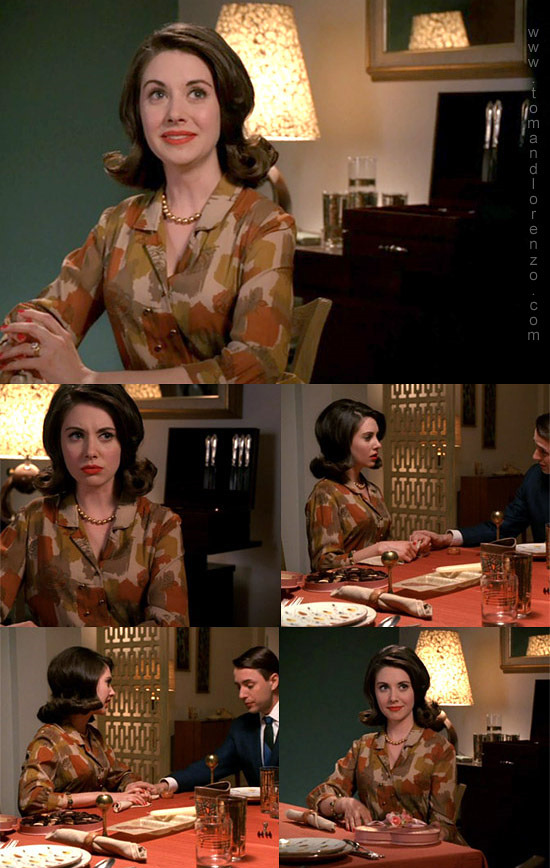 Pete comes home on Valentine’s Day to a tearful Trudy who has learned of yet another couple (Harry and his wife) who are expecting a baby. Pete initially acts like a bit of a jerk to her, but the scene ends tenderly. The Campbell marriage is probably one of the most complicated on the show. There are some serious red flags (at least by modern standards) that show how bad the marriage could get and yet there are moments that show what a good partnership the two of them can be when they try to.

Trudy couldn’t be more obviously tied to the home than she is with this outfit. She literally matches the tablecloth and settings exactly. It’s a shirtwaist dress, which we will see on her several more times, just as we see them on Betty several times. It was something of a wife uniform back in the day; both pretty and practical – or as practical as a huge skirt can get during your daily activities. Betty’s shirtwaist dresses look a bit older than Trudy’s, in dark grey or blue plaids or stripes more reminiscent of the ’50s. Trudy, being younger and more fashionable, wears hers in more modern prints and colors. This is a step forward for her in the hair department as well. A flip ‘do like this in 1962 would have been tres chic. Compare it Peggy’s later flip ‘do, which is kind of sad in comparison. Then again, Peggy got hers done in her Brooklyn kitchen and Trudy almost certainly got hers done in a high-end Manhattan salon. 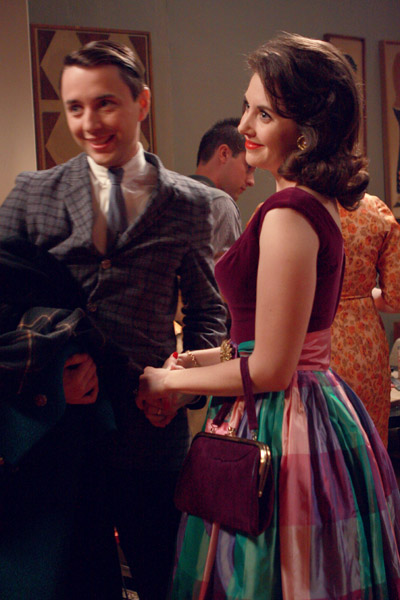 Pete and Trudy show up at Paul Kinsey’s apartment in New Jersey for a party. Because they’re such voracious social climbers (and snobs) they were both quite nervous entering the party, focused only on how they looked.

Once again, she’s in a plaid and once again, her outfit matches her husband’s, or at least compliments it. She’s in deep purple and bright blues, pinks and greens; he’s in a gray plaid jacket with a slight lavender hue and a bright blue tie. Partnership.

It’s also notable to look at the differences between her and Peggy here. They’re in almost exactly the same silhouette except Peggy’s look a little old-fashioned and prudish with the peter pan collar and the sleeves, whereas Trudy (as always) looks very of-the-moment. Trudy is in very traditional girly colors, while Peggy is in an aggressive red and black. Trudy spent the whole time fussing and worrying about how she was being perceived, while Peggy picked up a guy and made out with him in the hallway, not caring at all about how she was being perceived. Ironically, the girl in the modern outfit is stuck in the past and the girl in the old-fashioned outfit is blazing her own trail.

Pete’s father dies and they head over to his parents’ apartment. Remember, Trudy would have been considered nouveau riche by her in-laws and subsequently is very nervous about how they perceive her. Additionally, Pete is the black sheep of the family. Why is this notable? Because everyone else in the room is wearing an appropriate black or gray, while Trudy and Pete once again wear matching outfits in blue, which is also the color of the walls. It ties them to the setting while setting them apart from it at the same time.

Trudy and her sister-in-law Judy (which cracks us up) try their best to one-up each other for their mother-in-law’s (non-existent) affection. Judy showed up in the correct color and Trudy didn’t. She is the elephant in the room, and for that, she gets an elephant. This is a beautiful suit, with a Chanel-like cropped jacket and a very modern A-line skirt. It’s also the most expensive-looking outfit yet, which of course makes sense. She wouldn’t dare show up at the Campbell homestead in anything but her most expensive clothes. 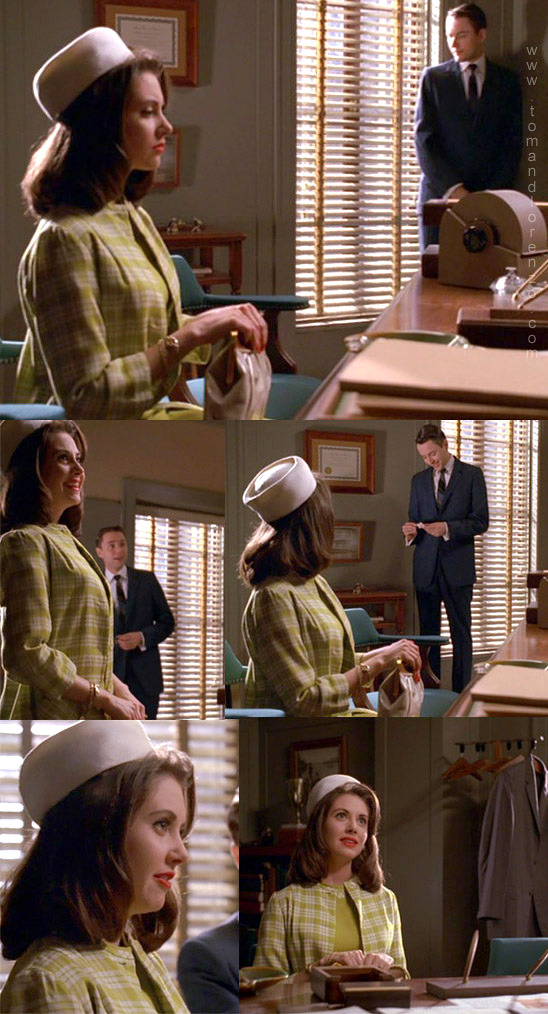 The Campbells visit a fertility doctor. While she doesn’t match the room exactly, she still fades into the light tones of the background while Pete stands out sharply. We don’t see much of this outfit and it’s a fairly short scene, but it’s stylish and youthful, with yet another bright plaid and big hat. Her hair is soft and they look like a dashing young couple of the period, even though she’s in turmoil and their marriage isn’t particularly strong at this point. 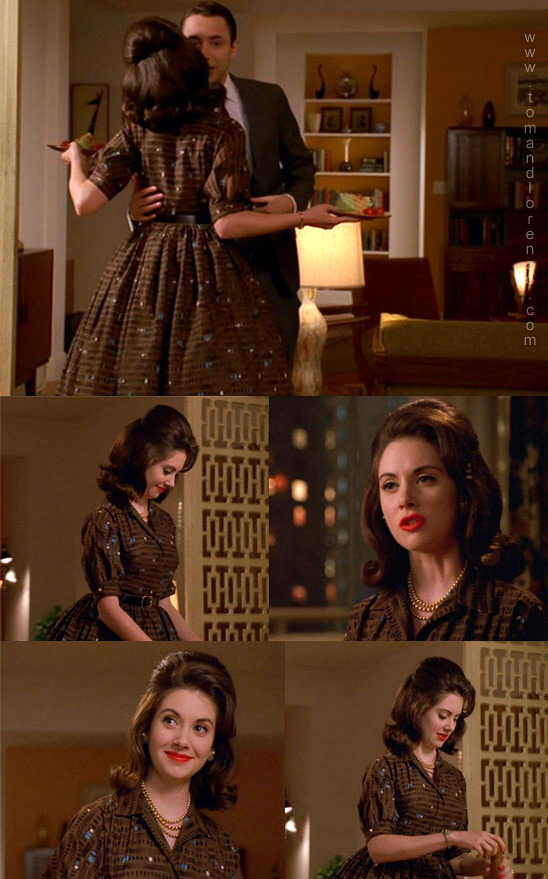 Pete comes home bragging about the fact that there’s nothing wrong with his sperm count, completely oblivious to the idea of what this news might mean for his wife. They have the worst fight yet.

It’s another wifely shirtwaist dress in another modern print. And once again, the autumnal tones of the Campbell apartment make her look like another piece of furniture in the room.

We have to say, while we realize that bouffant’d flip ‘do was very stylish at the time, it’s a totally ridiculous-looking hair style. 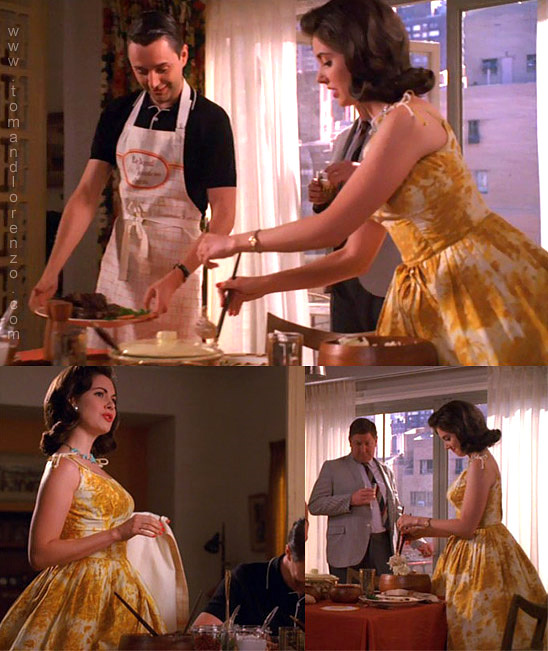 Pete and Trudy entertain his brother and Judy during Memorial Day weekend.

Again, it’s a very short scene, but we can’t not highlight this utterly adorable dress. Once again, she matches the scenery and once again, she’s wearing a typical Betty-style sundress in a very un-Betty-like print.