Without a big number (or two) in last night’s episode, the show managed to prove that it’s more than just big numbers. Which isn’t to say we weren’t wishing for a big number, but at least there were character 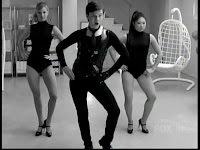 and story moments and frankly, there was sore need for them. We’ll give up the big number – but JUST THIS ONE TIME – in order for everyone involved to get their bearings.

And at least we got “Single Ladies.” Sure, Beyonce’s song is pretty overplayed at this point (Kanye notwithstanding), but you have to admit, they did manage to bring something new to it by having an entire football team dance to it. As for Kurt, he got the storyline he needed. Coming out’s a bit of a cliche but it was probably 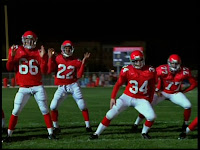 a necessary scene to have and it gave both Kurt and his befuddled but understanding father a nice moment. Although the real lump in your throat moment was smaller and came earlier. When Kurt came out on the field and his father said quietly “So little.” The “I accept you and love you anyway” scene was almost an afterthought to that far more powerful moment.

And the show’s taken the plunge straight into soap operatic melodrama with Quinn’s pregnancy and its secret father. We don’t mind, because as we said, the show needed to do some fleshing out, but too many of the female characters are 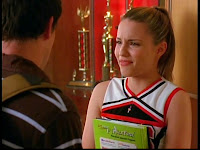 bitches and two storylines about women lying about their pregnancies is a bit much for one show, even if they’re tying the two stories together. Still, at least there’s some movement on the fake pregnancy story line because it was getting real old real fast. Besides, how much can we complain when Teri gets to offer Quinn prenatal vitamins with the line “Three times a day or your baby will be ugly?”

And speaking of lines, this episode was full of memorable ones, from Sue’s explanation for her pro-littering stance: so that sanitation workers “can afford tacos for their families,” to her response upon seeing Sandy’s doll collection: “Isn’t this just lovely and normal?” From Teri’s sister Kendra’s over-the-top yet illuminating description of child birth: “It is bloody and bestial 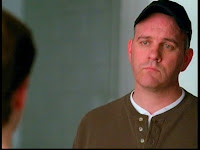 and you get poop all over your cowboy boots.” to her incredulous “Ohmigod. Is the baby black?” But nothing beats “Hi I’m Kurt Hummel and I’ll be auditioning for the role of kicker.”

It’ll be interesting to see if Kurt’s still on the football team in future episodes. We hope so. For one, because we hate when shows disregard their continuity like that, plus it gives Kurt’s character an edge that takes it slightly away from stereotyping, plusplus, with the addition of three football team members 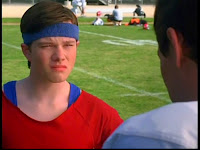 to the glee club, it’s looking like the show is pretty much based on upending cliches.

And as soon as the club got the required twelve members for nationals, they were down one with the fleeing of Rachel. It’s getting to be a bit repetitive. Every week another club member quits or threatens to quit. Then again, that’s part of the theme of the show. This is an embattled club with a lot of strikes against it and people actively trying to shut it down, so of course it would take a while for the membership to stabilize. Rachel’s quitting made sense from both a character 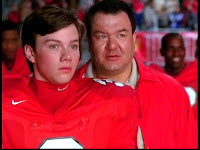 and plot standpoint. She’s clearly more talented than the rest of the club members, so it’s appropriate for the writers to address that. And who doesn’t doubt that Rachel will be back soon anyway? Besides, with the addition of the drama club,the show has more opportunities for big numbers. We at least got a hint of that as both Rachel and Tina got short solos.

So yes, we were hoping for a big number but instead we got some confirmation that the creators of the show have a plan and know what they’re doing. We’ll take it. Besides, next week it’s Kristin Chenoweth and you just know that bitch is gonna bring it.