Home » Television » You Should Be Watching Glee

You Should Be Watching Glee

We were happy to ignore the hype on this water-cooler-topic of a show up till now because our first reaction to any water-cooler-topic show is to recoil from it. We’re snotty about that sort of thing. Sue us. To be honest, we had it written it off as one of those hipper than thou shows that always come off a little mean-spirited to us. One glance showed us a collection of cultural stereotypes complete with dumb jocks, bitchy cheerleaders, a mincing baby queen and a sassy black girl to top it off. Not for us. Especially since the critics seemed to be so divided over it. 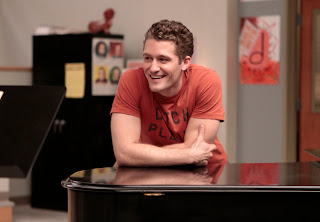 But we were bored and found ourselves on Hulu and after the 50th email imploring us to watch the show, we shrugged our shoulders and settled in to watch the pilot episode.

We’ll say this: it’s completely politically incorrect, wasting no opportunity to make fun of gays, minorities, the handicapped, bulimics, teen celibacy movements, and alcoholics. But there’s this weird vein of cheery, sappy optimism (embodied mainly by Matthew Morrison as Will Schuester, the glee club director with a dream) that threatens to break through at the oddest moments, no more so apparent than when the cast performs a number.

It’s like a switch is flipped and it goes from Arrested Development or a Christopher Guest mockumentary to an old Hollywood musical right in front of your eyes. Not that it’s all show tunes. Sure, you have your standards from Les Miserables and Chicago making brief appearances, but the show has a far more eclectic range than that, weaving in routines from Journey, Bell Biv Devoe, Color Me Badd, Kanye, Amy Winehouse, and Salt-n-Pepa that, under any other circumstances would be played solely for laughs due to the characters performing them but somehow manage to actually work. The next thing you know, you’re choking up at a Journey cover or bobbing your head to that white guy rapping.

Bottom line is, when it’s music time, they really go for broke and sell the hell out of it exactly in old Hollywood musical fashion. It’s not just playing with the tropes defined 65 years ago; it’s reveling in them. This is pure “Judy and Mickey putting on a show in the old barn” stuff. Trust us, we know from musicals.

When you try and sell that kind of old school showbiz to a modern audience, you’re taking a risk and predictably, a lot of the criticism of the show brings up that dreaded word “realism.” No, it’s not “realistic” for a rag tag band of mostly social misfits to break out in flawless harmony and over-the-top production numbers. Of course it’s not. That’s the whole point to those types of musical numbers. 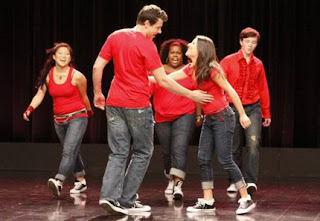 They’re metaphors not for what the world is, but for what we would like the world to be. By all rights, they should have no place in a show like this at a time like this yet somehow it works. The reason the show has sparked such significant interest is because it feels new. There have been a lot of different entries under “post-modern” when it comes to the classic musical genre of film, but none with quite this level of (pun unintended) gleefully mean spirited smugness broken up by wide-eyed, near-flawless production numbers. The kind of juxtaposition that results in an eye-popping show choir version of Amy Winehouse’s “Rehab.” You’re struck by the absurdity, but you can’t help bobbing your head along with it.

We weren’t ready to fully buy into it until the closing number of the pilot episode, when the embattled glee club sold the hell out of Journey’s “Don’t Stop Believin'” to our utter astonishment:

Goddamn if those little 25-year-old teenagers can’t make a song about meaningless and random sexual hookups sound like an anthem to bring tears to your eyes. The numbers are almost all like that: melodramatic, polished to unbelievability, and oddly affecting in spite of it. 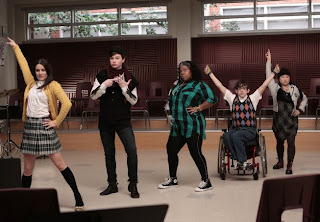 The show isn’t flawless, by any means. It feels a little larval to us at the moment. Like the creators blew a lot of creative energy trying to tread a fine line between satire and romantic fantasy and because of that, the characters feel like a bit of an afterthought. After watching the three episodes available online, we weren’t as annoyed by the stock characters as much as we thought we’d be. The Breakfast Club was nothing but stock characters and it still managed to tell some interesting and memorable stories about the lives of high schoolers. In fact, high school-based comedy/dramas like this tend to work well when they’re working with stock tropes, from Rebel Without a Cause to My So-Called Life. Yes, the characters need some serious development (not to mention consistency) but there’s nothing inherently wrong with a foundation of cliches if you know how to build on it.

We guess what we’re saying is, the show is doing a pretty amazing job of genre-busting on its own; we’re willing to cut it some slack while it gets on its feet in other areas. It helps that they have a relatively appealing cast, 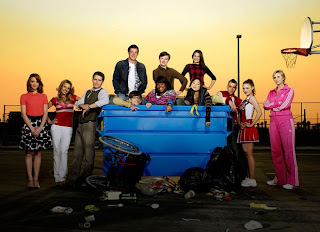 many of whom have serious performing capabilities. To provide a little salt to Morrison’s sometimes sickly sweet optimism is the insanely funny Jane Lynch as the Colonel Kurtz-esque cheerleading coach (“Get the agony out of your eyes!”). Her ability to deliver an acidly funny line almost completely deadpan (“The way you use your mental illness to help these kids is really inspiring.”) gives the show a very much needed dark edge to keep it from tipping into High School Musical or even Fame territory.

The show definitely needs to go through some growing pains if it’s really going to fulfill its promise, but until then, we’re not ashamed to say that we’ll watch it for the once-every-ten-minutes or so musical numbers performed by some amazing talents, including Broadway babies Morrison and Lea Michele who almost singlehandedly 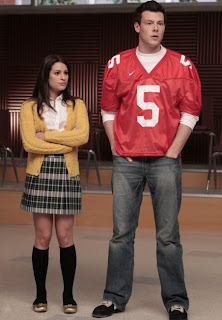 outdoes Steve Perry on his signature song. Cory Monteith probably has the weakest voice in the main cast, but he’s got a sweet boy band warble that he combines with a kinder, gentler take on the dimbulb jock that elevates it a little from mere cliche. Michele’s Rachel, a show tunes princess raised from birth by her two daddies, needs a little work. Her voice is amazing and she’s doing good work with what she’s being given, but they need to hammer out some consistency on her. Morrison is never better than when he’s performing a number, but he’s another one that needs a little more fleshing out because he comes off a little cloyingly one-note. Jayma Mays as the germaphobic, OCD-afflicted guidance counselor is hilarious when she’s given good scenes. The sissy gay definitely needs some work although he did get in a few choice lines (“Someday, you’ll all work for me.”).

But really, any flaws the show has are minor once the music starts and you find yourself sucked right into it to your complete surprise. Go watch it on Hulu if you haven’t seen it. It’s not perfect, but it’s a lot of fun.