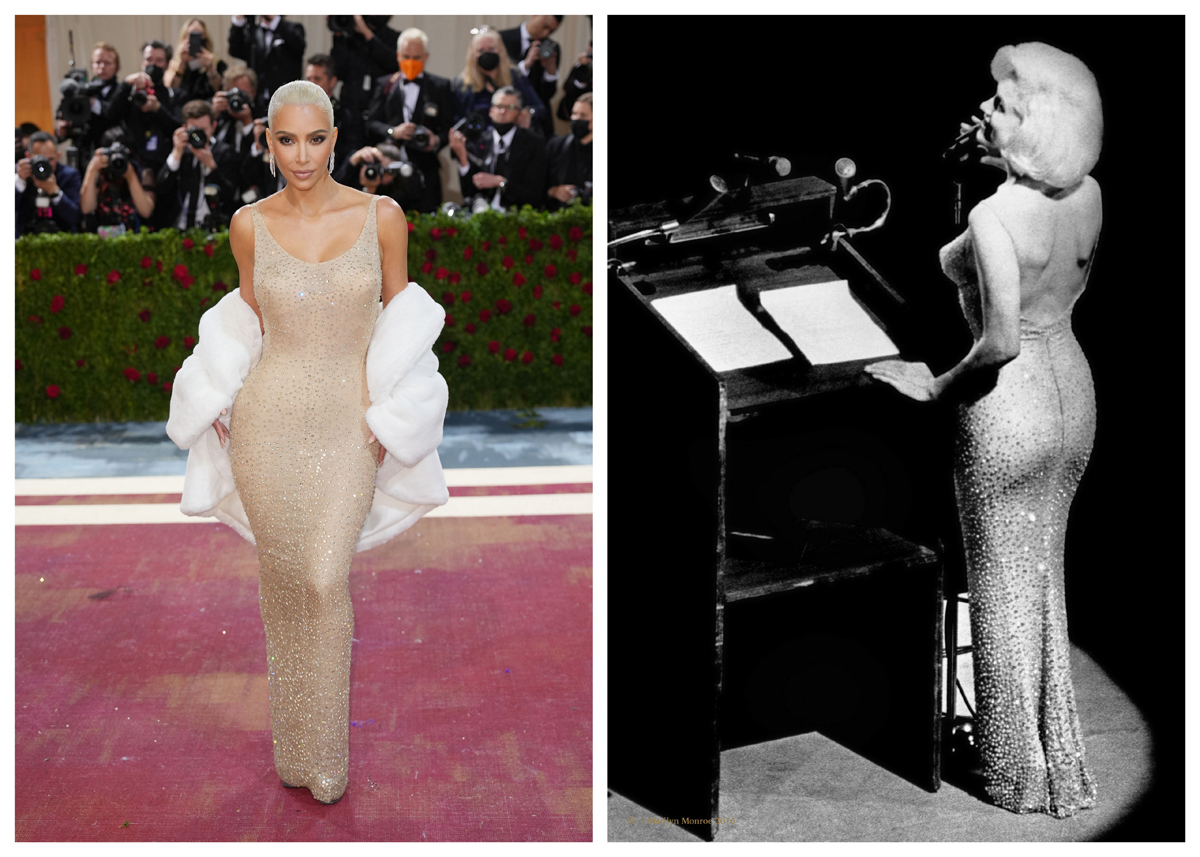 Kittens, how could we not devote an entire podcast to the biggest fashion story of the week and almost certainly one of the biggest of the year? A lot of virtual ink has been spilled in outrage this week  regarding Kim Kardashian’s request to wear Marilyn Monroe’s 1962 “Happy Birthday, Mr. President” to the Met Gala; a request that was granted by its current owner, the Ripley’s Believe it or Not “museum”  in Orlando. We try to provide as much information and context as we can regarding the dress’s provenance, the attempts to keep it safe, the outcry by fashion scholars, preservationists and curators, and ultimately, why so much of the anger over these actions is focusing on the wrong things. A little background information from the press release when the dress went up for auction in 2016:

Early in 1962, Monroe asked famed Hollywood costume designer Jean Louis to create a dress “that only Marilyn Monroe could wear.” The nude soufflé chiffon gown, perfectly matching Monroe’s skin tone, was embellished with hand-sewn round crystals, carefully placed since the dress was created with no underlining layer. Monroe wore no undergarments that night, instead relying on Louis’ masterful swirls of crystals in precisely the right places. Under the stage lights of Madison Square Garden, the fabric of the dress appeared to melt away, leaving only twinkling rays of light from the crystals reflected by the spotlight covering Monroe. The gown was designed as a sleeveless column dress with a scoop neck and open back with clear zipper, covered by hook and eye tab closure and a small train at the back hem. Despite the zipper and closures, the gown was so form fitting that Louis later disclosed that Monroe had to be sewn into the back closure. His hand stitching is still evident beneath the lower back hook and eye tabs. Since 1999, the dress has been displayed on a custom conservator
mannequin.

There’s a bigger picture here and, without defending any of the people involved, we do our best to paint it for you.

Because this was such a controversial action and because people tend to get red-hot about anything Kim Kardashian does, if you’d like to join in the discussion below, we ask that you listen to the podcast and address the points raised in it. If you’d rather have a general conversation about her, the dress, and why you think it’s either wrong or not for her to have worn it, by all means, join in the already lively discussion on the original post about it. Thank you for listening, darlings!